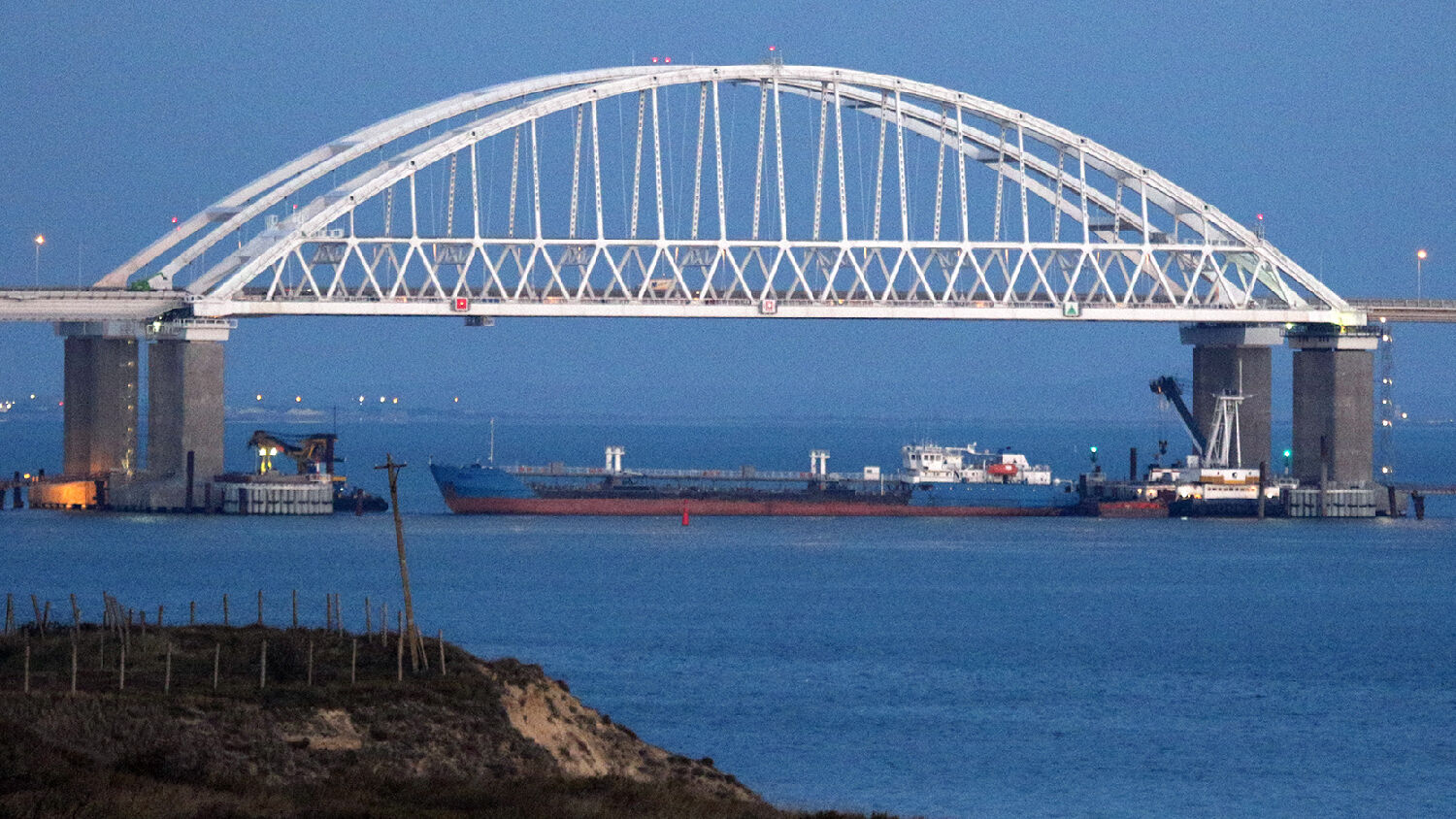 A view of Crimean Bridge across the Kerch Strait closed for the passage of civil vessels.
Getty Images

More evidence that Russian aggression is pushing the world into ‘a dangerous new era.’

The Russian Navy captured three Ukrainian naval ships on November 25 after opening fire on them in the Kerch Strait, marking a major escalation in tensions between the two nations that have been mired in conflict since 2014.

The Kerch Strait lies off the eastern edge of the Crimean Peninsula and is a vital shipping route connecting the Black Sea to the Sea of Azov, home to two of Ukraine’s most important ports. The Crimean Peninsula was part of Ukraine’s sovereign territory until 2014, when Russian forces unlawfully and forcibly annexed it. In May, Russia completed construction of a 12-mile-long bridge across the Kerch Strait, which connects Crimea to Russia.

The Crimean Bridge tightens Moscow’s grip on the peninsula and improves Russia’s connectivity and economic power. But it hinders Ukrainian trade. For decades, the Kerch Strait has been a vital shipping route for Ukraine, but the new bridge is too low for many standard-sized container ships to pass beneath. This has caused disruptions to Ukraine’s shipping, forcing it to use smaller and less efficient ships to pass through the route.

A 2003 treaty designates the Kerch Strait and Sea of Azov as shared territorial waters for Russia and Ukraine. But since completing the bridge, Russia has worked to increase its control of the waters. It has sporadically blocked access to Ukrainian vessels transporting lucrative grain and steel exports from Eastern Ukraine, effectively creating temporary chokeholds on the Sea of Azov.

Due to Russia’s ongoing and unlawful aggression there, Kiev-based analyst Taras Revunets told the Trumpet during a November 26 interview that the Kerch Strait has become “the South China Sea of Europe.”

On the morning of November 25, three Ukrainian vessels—a tugboat and two armored artillery boats—were en route northward from the Black Sea toward the Sea of Azov. As they approached the Kerch Strait, Russian Coast Guard vessels attempted to intercept them. A video posted by Ukrainian Interior Minister Arsen Avakov shows a Russian border guard ship, the Don, ramming the Ukrainian tugboat:

The Ukrainian ships continued toward the Kerch Strait. But Russian civilian and naval vessels worked in tandem to block a main passage beneath the bridge, as depicted in this image:

Russia has blocked the passage under Kerch bridge with a bulk carrier and other vessels, using its civilian ships for military purpose https://t.co/bYlhI1fftQ pic.twitter.com/foYYyvXVxb

Moscow then scrambled helicopters and fighter jets to the location as Russian naval forces surrounded the Ukrainian vessels. The Russians opened fire on the warships, injuring six crew members, and then seized all three vessels.

Ukrainian President Petro Poroshenko said there was “irrefutable evidence” that Russia’s behavior constituted “aggression.” The attack on Ukrainian vessels was “not a mistake,” he said, “but a deliberate action.” Poroshenko asked Ukraine’s parliament to impose martial law on the country, of which it approved a limited version on November 27.

cnn said the measure indicates “a major escalation in tensions between the two former Soviet Republics.”

Revunets said the most worrying aspect of the Russian aggression is that “it is not something extremely out of the ordinary,” and in fact not even the most destructive recent display of Moscow’s ongoing aggression on Ukraine. “Russia’s bossy behavior in the Kerch Strait did not result in any Ukrainian service members being killed in action,” he said. “Meanwhile, Ukraine has lost 12 service members on the frontlines in Donbas [Eastern Ukraine] in November alone.”

The point is a valid one. Since the conflict erupted in 2014, the violence between Ukraine and Russian-backed forces has killed more than 10,300 people and wounded more than 24,000. The impact on Ukraine’s economy has also been toxic. But in recent years most of this ongoing Russian violence against Ukraine, Revunets says, has “largely slipped under the radar of the Western media.”

Since Russian President Vladimir Putin has kept eastern Ukraine in a state of prolonged and frozen conflict, it is easy for onlookers in other nations to lose urgency about the crisis. But this week’s Kerch Strait incident is a fresh reminder of the danger and power of Putin’s Russia.

Back in 2005, Putin famously called the demise of the Soviet Union “the greatest geopolitical catastrophe of the century.” And he has been working ever since to restore Russian power to its Soviet levels. Putin’s restoration project has included resurrecting relics from the Soviet “glory days,” such as the Soviet anthem, the Hero of Socialist Labor award, a Stalin-era public physical fitness program, and a Soviet-style law against dissent.

And in 2008, Putin showed his people and the world that he was even willing to use force to recreate the geography of the Soviet Union.

That August, his armed forces invaded the former Soviet republic of Georgia, easily defeating all resistance. Moscow seized control of 20 percent of Georgia’s territory, and remains in control of it to this day.

This was a major geopolitical event, sending shock waves around the globe.

Trumpet editor in chief Gerald Flurry discussed its significance in our October 2008 issue: “Russia’s attack on Georgia in August marks the beginning of a dangerous new era in history. This was the first military strike of a rising Asian superpower—and there will be more!”

Mr. Flurry went on to specifically name which other former Soviet nation might be targeted next: “Will a crisis occur over Ukraine? That area is the breadbasket of Russia, and surely it is willing to wage war over that as well.”

Time proved that forecast accurate, with Russia’s March 2014 invasion and annexation of Ukraine’s Crimean Peninsula. Putin had literally redrawn the borders of Europe—twice.

Mr. Flurry wrote, “The fact that one man—one man—is responsible for this huge geopolitical shift is deeply significant” (March 2014).

Since then, Putin has continued using his power to prevent Georgia, Ukraine and other former Soviet countries from developing closer ties with Europe. He is also turning Russia’s military into a modern and more lethal 21st-century force. He pushed America out of his backyard in 2014 by persuading Kyrgyzstan to oust the U.S. from Manas Air Base. More recently, Moscow has become deeply involved in the Middle East, sidelining America, helping the brutal Syrian regime to stay in power, and allowing Iran to maintain its pursuit of nuclear weapons.

It is clear that Putin has made some major gains in his quest to restore Russia’s power and international relevance to its Soviet levels. And Bible prophecy shows that, going forward, he will lead Russia into an even more dangerous and aggressive direction.

In his booklet The Prophesied ‘Prince of Russia,’ Mr. Flurry explains that Putin is personally described in ancient Bible prophecies in Ezekiel 38 and 39, and that his rule indicates that “[w]e are entering into the worst crisis ever in man’s history.” But Mr. Flurry adds that these prophecies are “super-inspiring at the same time.”

He writes: “Vladimir Putin is a sign, literally a sign, that Jesus Christ is about to return! This is one of the most inspiring messages in the Bible.”

What we are seeing in Russia ultimately leads to the transition from man ruling man to God ruling man! And it is almost here! It is just a few short years away.

We need to watch Vladimir Putin closely. I believe he is almost certain to be the “prince of Rosh” whom God inspired Ezekiel to write about 2,500 years ago! We need to watch what is happening in Russia and how Europe responds to it. … Russia’s resurgence—which we see reported in headlines often—shows that end-time Bible prophecies are rapidly being fulfilled!

In the near term, the rise of Putin’s Russia is a harbinger of terrible global tumult. But this development is intimately tied to the best imaginable news: Jesus Christ is going to return to Earth and usher in an age of peace and prosperity for the peoples of Russia, Ukraine and all the world.

To understand the details of Putin’s role in Bible prophecy, and what it means for your life, order a free copy of Mr. Flurry’s landmark booklet The Prophesied ‘Prince of Russia.’