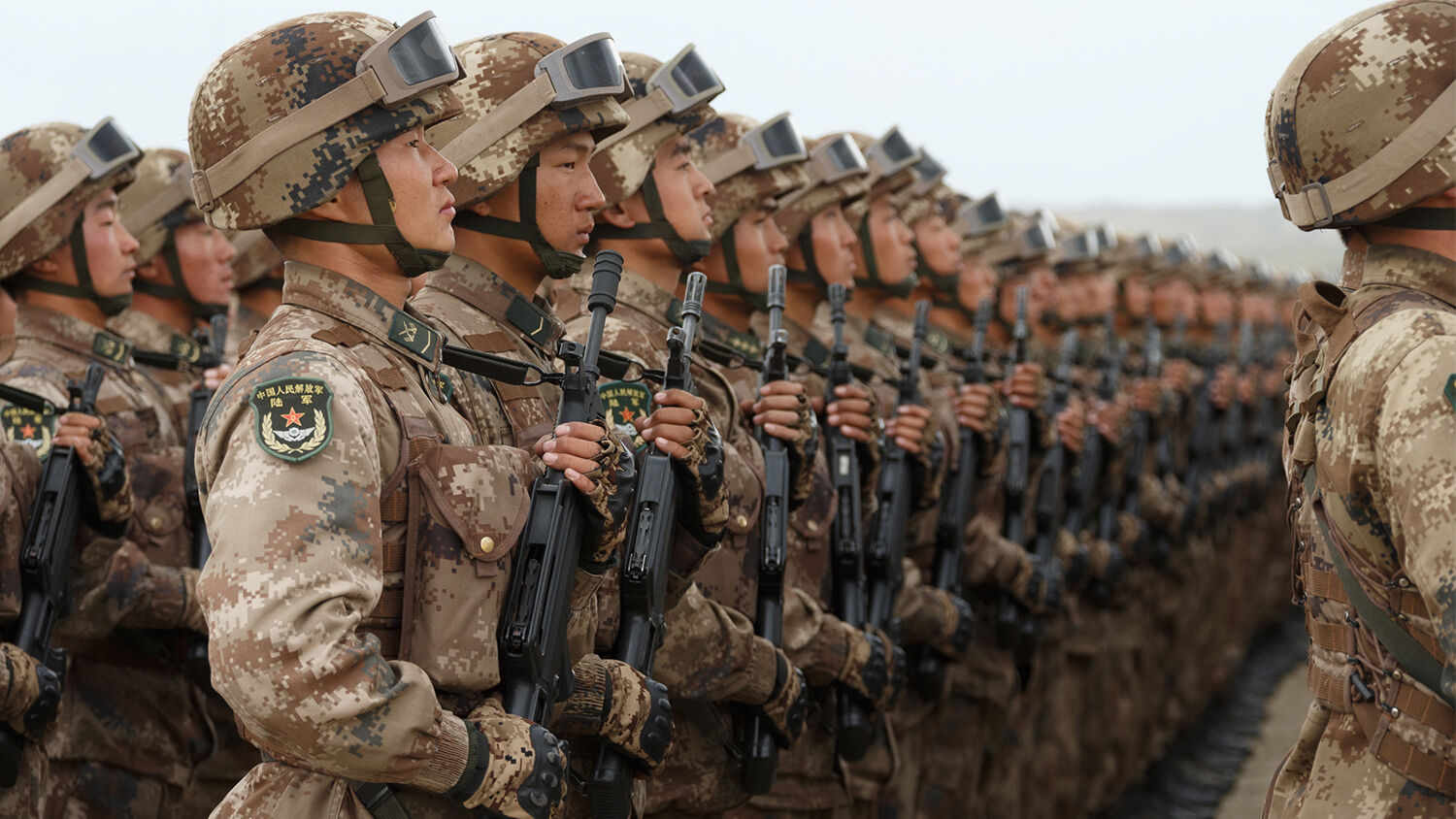 As tensions have intensified between their nations and the West, Russian and Chinese authorities have said they are preparing for war.

On October 25, Chinese President Xi Jinping visited the Southern Theater Command of the People’s Liberation Army. Xi, who is also the pla’s commander in chief, told an assembly of generals to “concentrate preparations for fighting a war.”

He instructed the military to “accelerate capacity-building for commanding and improve their commanding and operation systems to ensure smooth and efficient command,” according to the government-controlled Xinhua news agency.

Xi said the Southern Theater Command bears a “heavy military responsibility” since it is in charge of operations in the South China Sea and the Taiwan Strait—two flashpoints for conflict. “We need to take all complex situations into consideration and make emergency plans accordingly,” he said. “We have to step up combat readiness exercises, joint exercises and confrontational exercises to enhance servicemen’s capabilities and preparation for war.”

Xi’s statements come during a time of rising tensions over the South China Sea as the United States, the United Kingdom, France and Australia are increasing freedom of navigation operations and related activities in the disputed region that China claims. His remarks come only weeks after a Chinese warship almost rammed an American destroyer as the U.S. ship conducted a freedom of navigation operation in the region.

Belousov’s remarks came after the U.S. announced that it would withdraw from the Intermediate-Range Nuclear Forces Treaty. Before President Ronald Reagan and Soviet leader Mikhail Gorbachev signed the treaty in 1987, such weapons as the Soviet SS-20 and the American Pershing ii cast menacing shadows over Europe. These systems were mobile, highly accurate and capable of being hidden and quickly redeployed. Some had the ability to fly nap-of-the-earth, staying below enemy radar coverage, and to fire numerous independently targetable nuclear warheads—all within just a few minutes.

In a deterrence environment, systems of this kind are inherently destabilizing. So Reagan and Gorbachev agreed to dismantle existing systems and prohibit future development. But in 2008, Russian President Vladimir Putin began testing new missiles that are banned by the treaty. In the years since, Russia’s treaty violations have continued, culminating in the deployment last year of the 9M729.

He continued: “We are preparing to defend our homeland, our territorial integrity, our principles, our values, our people—we are preparing for such a war.”

Belousov claimed that Russia’s preparations are only a response to provocations from the U.S.: “Russia is preparing for war, and the U.S. is preparing a war. Otherwise, why would the United States withdraw from the treaty, build up its nuclear potential, and adopt a new nuclear doctrine?”

It is worrying to see authorities in both China and Russia publicly acknowledging the increasingly militaristic posturing of their nations and the rising possibility of war. Besides showing the increasingly similar worldviews of Russia and China, the statements also show the stage is being set for major war to break out once again.

In his booklet The Prophesied ‘Prince of Russia,’ Trumpet editor in chief Gerald Flurry explains that Bible scriptures prophesy of a time in the near future when Russia and China will join forces:

Around a.d. 90, the Apostle John recorded an amazing prophecy: “And the number of the army of the horsemen were two hundred thousand thousand: and I heard the number of them” (Revelation 9:16). That means an army of 200 million men! That is more people than were alive in the world when that prophecy was recorded. This is an end-time prophecy that we are certain to see fulfilled very soon.

I believe Ezekiel 38:2 actually revolves around the prince leading the 200 million-man army, which includes China and other nations. But the two key nations are Russia and China. …

Current events show this Asian army is taking shape already. You can see it in Putin’s growing authoritarianism, and also in his outreach to other Asian powers. Russia has supplied China with many military armaments over the last decade or so; it also helped the Chinese go nuclear. For many years the Russians have been allied with China, at least to some degree.

Mr. Flurry goes on to explain that in the end time, God will use this force to confront the militaries of Europe:

Details about this army are revealed in passages such as Revelation 9:13-21, Revelation 16, Daniel 11, Jeremiah 50 and Joel 2. In Joel 2:11, this 200 million-man Asian force is actually called God’s army. That means God is orchestrating His plan in the midst of all this warfare.

God is going to use this colossal Asian force to confront the military of a united German-led Europe, which will also be on the scene at this time. It will obliterate Europe, but not the main European armies. …

War is coming between Russia and China and a German-led Europe—war on a scale that is hard to imagine! Millions and even billions of people will be killed. Nuclear bombs and other weapons of mass destruction are going to impact every nation on Earth!

The increasingly militaristic posturing of Russia and China is leading to the most violent war in mankind’s history. But Mr. Flurry explains that there is also deeply inspiring hope connected to these trends! He continues:

This immense war between European and Asian forces will end in the return of Jesus Christ! … But the Bible also prophesies that at the end of all of these wars, the world is going to see the greatest event ever in the universe: the Second Coming of the Messiah, Jesus Christ! As Christ Himself said, if He didn’t return, there would literally be no flesh saved alive (Matthew 24:22; Moffatt). But before humanity annihilates itself, He will return and stop all this madness!

It is alarming to see leaders from Russia and China openly preparing for war. But it signals something that should fill us with profound hope: The age of mankind rejecting God’s law and authority is nearly at an end, and an age of peace and prosperity for all men is very near.

One of the final sentences of Mr. Flurry’s powerful booklet states, “Surely we ought to be studying our Bibles and understanding these prophecies.” To begin or continue that potentially life-changing study, please order your free copy of The Prophesied ‘Prince of Russia.’