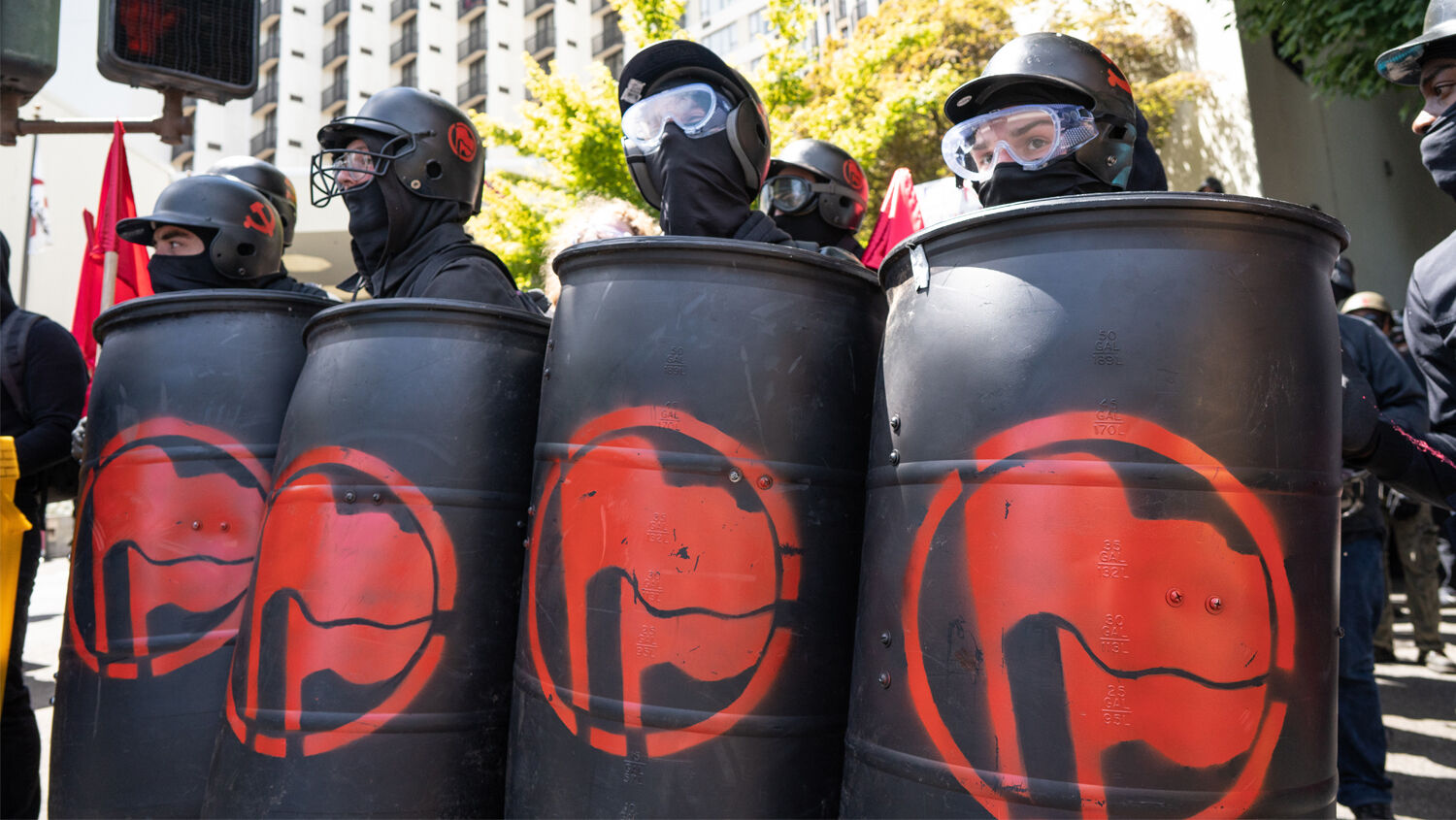 Left- and right-wing groups erupt into violence in Oregon.

Violent brawls between left-wing Antifa and right-wing Patriot Prayer broke out in Portland, Oregon, over the weekend. Dozens of members of the right-wing group Patriot Prayer began a “flash march for law and order in pdx,” an acronym for Portland, on October 14. They were met by Antifa counterprotesters; the confrontation led to violence.

On September 30, Portland police shot and killed Patrick Kimmons, who had just shot two men when police arrived on the scene. He started to “head their way holding a gun” when the police shot him, according to the Oregonian. This led to a protest against police brutality held on October 6.

During the protest, demonstrators began blocking off roads and directing public traffic. An elderly man, Kent Houser, was driving through the area when the street became filled with protesters. Houser wanted to turn right, so he slowly crept along his path. Protesters yelled at him and struck his car. One man threw himself on the hood of the vehicle. Houser continued inching forward until the path ahead was finally clear of people, then sped away. Protesters continued running after him.

Houser was accused of “plow[ing] through protesters.” The video shows something quite different.

WATCH: A driver plowed through protesters in downtown Portland this afternoon. Police say they have not heard from either the driver or victim yet. https://t.co/OBeORYW7Rf pic.twitter.com/18wQ8hb0nH

“When you have an angry mob yelling at you and beating on your car, you just want to get out of there,” Houser said. “If I was really interested in running someone over, I could have just gunned the engine, and that guy would have been under my car. He would have been toast.”

The police monitored the protest but did not get involved. To protest Portland Mayor Ted Wheeler’s handling of police inaction during the October 6 march, Patriot Prayer held its “Law and Order” march on October 14.

The march started peacefully early Sunday evening with chants of “Hey hey, ho ho, Wheeler’s got to go.” Police stood by, knowing that clashes with Antifa counterprotesters were likely. After nightfall, fighting broke out with both groups using fists, pepper spray, batons and clubs. Many people were injured, but none were hospitalized.

When members of Antifa attempted to burn American flags, one Patriot Prayer member snatched a burning flag from the counterprotesters and sprinted away, putting out the flames.

This is the third major confrontation between these two groups within two years. The first incident happened in June 2017, with the second occurring almost exactly a year later. Unlike the first two, however, police did not arrest anyone during the October 14 march.

America has a history of protests and riots, but in recent years, the frequency, severity and violence of these riots have increased. And it is only getting worse.

This most recent clash came amidst calls for incivility and violence made by prominent Democratic Party leaders. On October 7, former Attorney General Eric Holder said, “When [Republicans] go low, we kick ‘em. That’s what this new Democratic Party is about.” On October 9, Hillary Clinton said that Democrats “cannot be civil” until they regain power in the American government.

When Congresswoman Maxine Waters called for the harassment of U.S. President Donald Trump’s officials in June, multiple members of President Trump’s staff were chased out of restaurants and shouted at in the streets. In his article “American Politics Turn From Ugly to Violent,” Trumpet managing editor Joel Hilliker listed several other examples of violence and incivility that are becoming the norm in American politics:

Republican Rep. Brian Mast received death threats directed toward his children because of his support of President Trump’s immigration policies. Laurence Wayne Key called an intern at Mast’s office and said, “If you’re going to separate kids at the border, I’m going to kill his kids.”

Charles Murray, a guest speaker at Middlebury College, and Prof. Allison Stranger were confronted with “scary, violent mob action.” Students and nonstudents protested the controversial, “classist” guest speaker. The professor was injured during the assaults and subsequently hospitalized.

Antifa counterprotests in Berkeley, California, in 2017 resulted in at least five people being attacked with pepper spray and beaten, tens of thousands of dollars’ worth of damage, and 13 arrests. Joey Gibson, founder of Patriot Prayer, was among those attacked by the counterprotesters.

These are just a small number of the many threats and acts of violence that have resulted from America’s divisive political hatreds. Along with these incidents, the U.S. is plagued with frequent race-related protests and even riots, including the 2014 riots in Ferguson, Missouri, and the 2015 riots in Baltimore, Maryland.

The political and ideological division in America is spinning out of control. Gone are the days when Americans could debate political issues in a civil manner while retaining their love and patriotism for all Americans. Nowadays, if someone disagrees with what you believe, violence is becoming the go-to answer.

This trend is shockingly disturbing and disappointing, but it should not be surprising. It is, after all, prophesied in your Bible! “Your country is desolate, your cities are burned with fire: your land, strangers devour it in your presence, and it is desolate, as overthrown by strangers. … And I will give children to be their princes, and babes shall rule over them. And the people shall be oppressed, every one by another, and every one by his neighbour: the child shall behave himself proudly against the ancient, and the base against the honourable” (Isaiah 1:7; 3:4-5).

Doesn’t this sound like the direction America is heading in today? Rioters burn flags, cars and buildings. Our national leaders are acting like children. Protesters are punching, kicking and stabbing each other. Young people are harassing and disrespecting their elders. America is terribly divided, and this is just the beginning of the sufferings that our nation will endure.

“These divisions are leading to America’s collapse and downfall,” Mr. Hilliker continued.

But there is hope. Trumpet editor in chief Gerald Flurry explained the causes and future outcome of these problems in his July 2015 article “‘Your Cities Are Burned With Fire’”:

Every prophecy that is fulfilled points to the eventual Second Coming of Jesus Christ. Those who listen to and act on God’s warning message now will be spared from the terrible suffering that occurs beforehand.