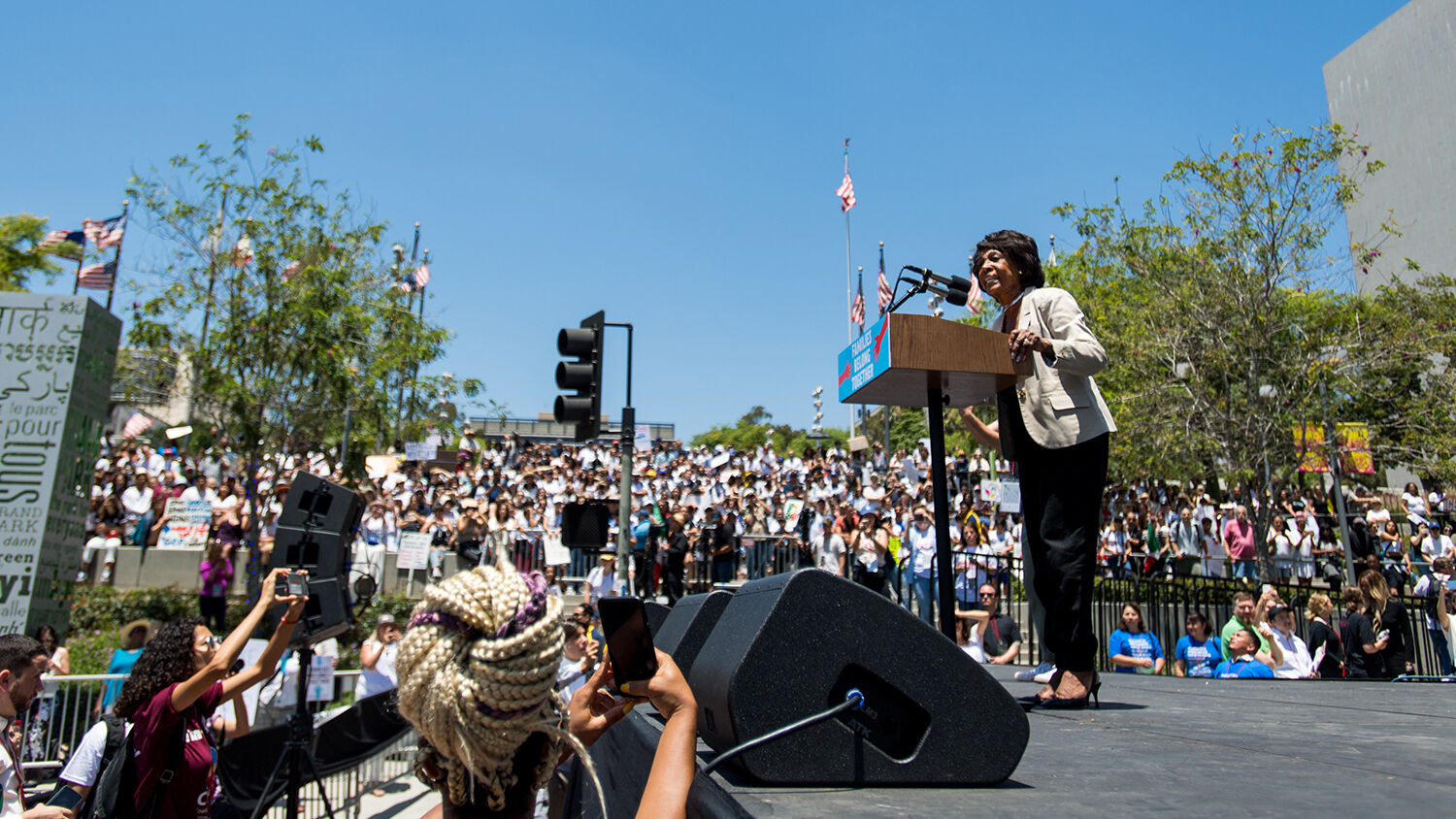 Americans argue about politics. But this is turning into something much uglier and much more dangerous than just a clash of ideas. How bad can this argument get? Could people start getting violent?

Congresswoman Maxine Waters and others are taking their ideological struggle to the streets. Waters has called on those who share her liberal ideology to publicly harass prominent members of the administration of President Donald Trump, saying, “[I]f you see anybody from that cabinet in a restaurant, in a department store, at a gasoline station, you get out, and you create a crowd, and you push back on them, and you tell them they’re not welcome anymore, anywhere.”

Politics have always brought out sharp disagreements. But some on the far left are urging people to cross the line from reasoned argument to active harassment. And people are listening. The owner of a Virginia restaurant forced the president’s press secretary to leave mid-meal on “moral” grounds because the establishment’s homosexual and/or transgender staff did not want to serve her. In another instance, an individual yelled “Fascist!” at a senior adviser as he was dining. A large group of socialist hecklers entered a restaurant where the Homeland Security secretary was dining, screaming at her until she left.

The political division in America is now much more than just political division. It’s hatred. And the hatred has moved from the legislature chambers and the press briefing room into the restaurants and out onto the streets.

But could this actually lead to violence? It already has.

In June 2017, a man went to an Alexandria baseball field where members of Congress were at an early morning practice for a charity baseball game. He learned that the players there were Republicans, then returned with a rifle and a pistol and shot four people, including Congressman Steve Scalise, before being pinned down and fatally wounded by law enforcement.

This man was clearly unstable, but he was undeniably motivated by political hatred. It was no longer enough for him to just post political vitriol on social media, to write letters to the editor, to make angry phone calls to his local Congressman, to work on the Bernie Sanders presidential campaign. He wanted to take it to the streets—with bullets.

People on the right have also engaged in violence, including a bizarre shooting at a Washington, D.C., restaurant and a pedestrian-ramming attack in Charlottesville, Virginia, that killed one woman.

These are extreme events of political hatred—but no longer unthinkable.

Groups of leftist extremist protesters have occupied public areas and businesses, threatened public speakers who hold opposing political views, marched in public while heavily armed, and have resorted to literal violence in the streets. Large numbers of people are calling for the assassination of the president of the United States. Entertainers are making “art” depicting that assassination. Is this all just going to just simmer down and go away?

Not if fuel keeps getting poured on the fire. After all, political violence does not begin with a man loading a gun and walking onto a baseball field. It begins with political hatred expressed day after day and year after year by journalists, entertainers and political leaders.

What we are dealing with is not just the same old political division. It is not just incivility or bullying. This is a serious threat to the strength—and even the survival—of our nation.

To see how widespread and how dangerous this threat is, don’t just wait for another baseball field shooting. Look for the rising levels of hate filling the media and fueling the fire.

One of President Trump’s policies has been to impose a travel ban on certain nations with anti-American agendas. On June 26, the Supreme Court finally ruled in favor of the policy that restricts travel from seven countries: Iran, Libya, North Korea, Somalia, Syria, Venezuela and Yemen. President Trump moved forward with this travel ban in an effort to protect the nation from terrorists who could travel into America from high-risk nations.

However, he has taken a lot of flak as the ban has been seen as an attack on Islam and a repression of Muslims’ religious freedom. The executive director of Amnesty International U.S.A., Margaret Huang, said, “This replacement order is the same hate and fear with new packaging. No amount of editing can make this executive order anything but what it is—blatant bigotry.”

This is not reasoned debate. This is fuel on the fire.

Farhana Khera, the president and executive director of Muslim Advocates, stated on June 26:

In affirming President Trump’s bigoted Muslim Ban, the Supreme Court has given a green light to religious discrimination and animus. Not since key decisions on slavery, segregation in schools, and Japanese-American incarceration have we seen a decision that so clearly fails to protect those most vulnerable to government-led discrimination. Trump may have won this round, but we are focused on the next round and will continue to fight until justice prevails and his anti-Muslim agenda is overturned for good. … This decision puts the basic rights of all Americans at risk. It says that even when an administration is clearly anti-Muslim, when it targets Muslims, when it insults Muslims, and when it puts a policy in place that specifically hurts Muslims—that the Court will let it stand.

Leftists like those who threw the press secretary out of a restaurant claim that the Trump administration wants to rip innocent children away from their parents. The facts of the matter are much more reasonable, but leftists are committed to dumping more fuel on the fire. Some are just trying to demonize non-leftists for the sake of midterm elections. Some are stirring political hatreds and do not realize just how much hatred they are fomenting. Others do.

Republican Rep. Brian Mast received death threats directed toward his children because of his support of President Trump’s immigration policies. Laurence Wayne Key called an intern at Mast’s office and said, “If you’re going to separate kids at the border, I’m going to kill his kids.”

Charles Murray, a guest speaker at Middlebury College, and Prof. Allison Stranger were confronted with “scary, violent mob action.” Students and nonstudents protested the controversial, “classist” guest speaker. The professor was injured during the assaults and subsequently hospitalized.

Antifa counterprotests in Berkeley, California, in 2017 resulted in at least five people being attacked with pepper spray and beaten, tens of thousands of dollars’ worth of damage, and 13 arrests. Joey Gibson, founder of Patriot Prayer, was among those attacked by the counterprotesters.

These are just a small number of the many threats and acts of violence that have resulted from America’s divisive political hatreds. Along with these incidents, the U.S. is plagued with frequent race-related protests and even riots, including the 2014 riots in Ferguson, Missouri, and the 2015 riots in Baltimore, Maryland.

This increase in unrest and the decline in American morals and civility should not come as a surprise. In fact, it is prophesied in the Bible! In order to understand these Bible prophecies, however, one must first recognize that America and Britain are referred to in biblical prophecy as “Israel.”

Hosea 4:1-3 describe the problem that God has with America today: “Hear the word of the Lord, ye children of Israel: for the Lord hath a controversy with the inhabitants of the land, because there is no truth, nor mercy, nor knowledge of God in the land. By swearing, and lying, and killing, and stealing, and committing adultery, they break out, and blood toucheth blood. Therefore shall the land mourn, and every one that dwelleth therein shall languish ….” God is angry with the United States because there is no truth, mercy or true knowledge of God. God is upset with the sins of the American public as well as the government, and He is allowing our society to fall apart. There are riots in cities across the nation, and domestic violence and killings are becoming more and more common so that “blood toucheth blood” and “the land mourn[s].”

These riots, especially the more violent ones in which buildings and cars go up in flames, are direct fulfillments of Isaiah prophesying, “[Y]our cities are burned with fire” (Isaiah 1:7).

Someday Americans will be ashamed of ourselves. We will be ashamed at what we did with the unparalleled inheritance God gave us. We have taken the land, the traditions, the culture, the laws and other blessings God gave us, and we are squandering them, spitting on them, and setting on fire the flag that represents them.

Today’s political and media climate are dumping fuel on that fire. Instances of actual political violence are still comparatively infrequent. But as people keep fueling the political hatreds and “taking it to the streets,” those instances will become more and more frequent—and eventually they will explode.

These divisions are leading to America’s collapse and downfall. But there is hope. Trumpet editor in chief Gerald Flurry explained the causes and future outcomes of these problems in his July 2015 article “‘Your Cities Are Burned With Fire.’” Every prophecy that is fulfilled points to the eventual Second Coming of Jesus Christ. Those who listen to and act on God’s warning message now will be spared from the terrible suffering that occurs beforehand.

Read the “Moral Decline in Britain and America” for more information. The Trumpet watches this trend as it leads toward the greatest news ever!