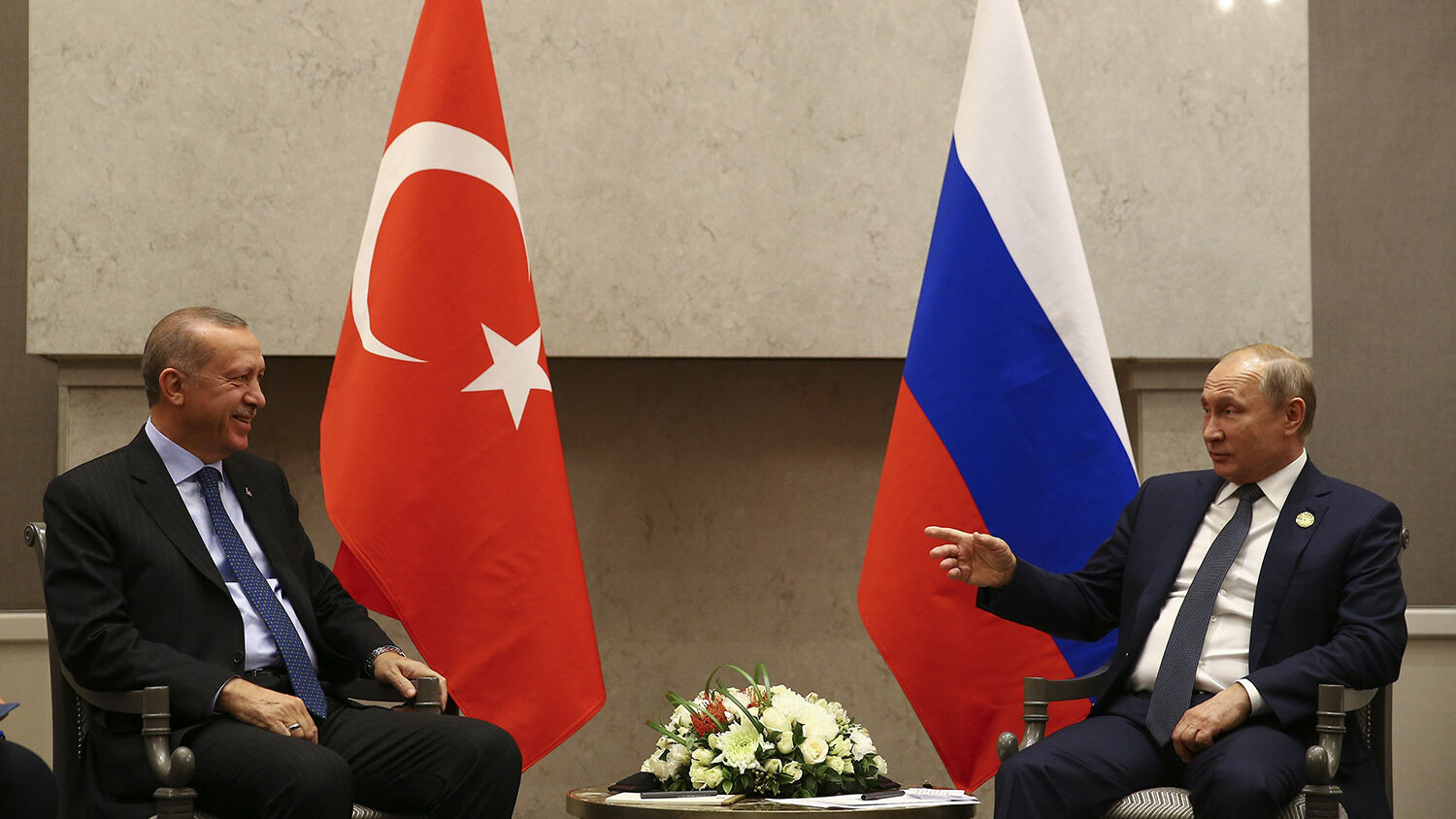 Sanctions force the two autocrats to negotiate with Germany over Syria.

Germany’s diplomatic relations with Turkey and Russia are warming up again. For several years, these relationships have been frosty. “But now, a diplomatic firework erupted,” Reuters reported last week (Trumpet translation throughout).

Ahead of the meeting with Putin, Merkel indicated that a solution for Syria is being discussed. She said officials are looking into the possibility of negotiations regarding Syria that would involve Turkey, Russia, Germany and France.

Not long ago, a political agreement between these nations seemed far-fetched. There are at least three reasons why Russia’s and Turkey’s relations with Germany are changing: America’s changing foreign policy, dire economic situations in Russia and in Turkey, and the ongoing war in Syria.

Both Turkey and Russia are now asking for German involvement in Syria. A prophecy in Psalm 83 indicates that Syria will ally with Germany. The situation has not reached that point yet, but Germany is entering into a position where it can use its economic leverage to get political headway in Syria. Soon after the Syrian crisis began in 2011, Trumpet editor in chief Gerald Flurry wrote in 2012 (emphasis added):

What we saw developing in 2012 is making big headlines today. In 2012, German involvement in the region seemed unlikely. It was neither desired by Russia nor deemed necessary by the United States. At the time, Germany was more or less a concerned observer, albeit with a major vested interest in reducing the flow of Syrians and other migrants into Europe. But now German intervention appears to be the logical solution.

Syria is still ruled by pro-Iranian President Bashar Assad who, despite 7½ years of civil war, has retained power, largely thanks to Russian military support. But Russia cannot guarantee its support for much longer.

After Russia invaded Ukraine in 2014, the United States and the European Union imposed sanctions against Russian authorities and companies. Experts estimate that Putin’s military backing for the Assad regime is costing Russia $3 million a day and that Russia has spent $3.5 billion on its military support in Syria since 2015.

Putin knows that neither Russia nor its partners, Iran and China, are in a position to grant Syria the stability it needs.

In addition to military support Assad’s regime is in desperate need of economic support. Estimates to rebuild the country range from $250 billion to $1 trillion. For a while, it appeared that the U.S. would help finance Syria’s rebuilding. But under U.S. President Donald Trump, all Putin has received are more sanctions.

Russia is desperate to find a new alliance. And Putin has turned to Germany.

Putin’s August visit marked the first bilateral meeting in Germany since Russia’s intervention in Ukraine in 2014.

Meetings between the two heads of state can’t be taken for granted. In the 4½ years since Russia invaded Ukraine and annexed its Crimean Peninsula, such meetings have been rare. Contact between the two was restricted to summit meetings, phone calls and just two bilateral visits by Merkel to Russia.

But the trend began reversing in 2018. In May, Merkel traveled to Sochi to meet Putin. Later she received Russian Foreign Minister Sergei Lavrov and Chief of Staff Waleri Gerasimov in the Berlin chancellery.

A major point of discussion between Putin and Merkel was Syria. Russia is asking Europe to help rebuild Syria.

Syria’s neighbor to the north is also turning to Germany for help. Turkey’s economy is failing. Serious economic problems compounded by U.S. tariffs imposed on August 13 have forced its currency, the lira, to lose a third of its value.

Just a year ago, Turkey and Germany were clashing over Erdoğan’s authoritarian power grabs and Germany’s response. Erdoğan accused the Germans of using Nazi tactics. His sharp accusation came after Germany blocked Erdoğan from rallying Turkish supporters living in Germany. Now Merkel has given Erdoğan a significant political boost by inviting him to make a state visit to Berlin on September 28. But this time he comes pleading for economic assistance from Germany.

Moreover, Turkey has been heavily affected by the war in Syria. Hundreds of thousands of refugees are seeking refuge in Turkey. The country is overwhelmed and desperate for a quick resolution of the Syrian war.

Erdoğan has called for a meeting between Russia, Germany and France to negotiate a common strategy. As he waits for a response, he is becoming more desperate for solutions.

Germany too wants a solution for Syria. The ongoing refugee crisis prods Europe to act. Germany hopes to use the crisis to advance its geopolitical ambitions in Syria. (Read “Germany’s Secret Strategy to Destroy Iran” to learn more.) But unlike Turkey and Russia, Germany has time on its side. Next year, Germany will fill a temporary seat on the United Nations Security Council, giving it more influence over Syria.

The discussions are difficult. Putin, Erdoğan and European leaders are pursuing different goals in the region. Europe’s demand for a democratic regime change in Syria has long been opposed by Russia.

But the longer Germany waits, the more willing Turkey and Russia will be to negotiate. Reuters reported, “German and European diplomats note that the Russian and Turkish governments want to talk more. ‘There are requests for dialogue at all levels,’ it says.” The report continued:

Both countries have been under considerable pressure from the U.S. and have been penalized. Both presidents who were recently bursting with self-confidence are now under considerable economic pressure. Therefore, both are rediscovering the EU and Germany as potential partners after phases of aggressive confrontation.

President Trump’s tariffs have softened the heart of the autocrats and driven them into Germany’s hands. While Erdoğan and Putin unite in opposition to Trump, they surrender to Germany’s economic strength for support.

“The Weakness of the Autocrats Is Europe’s Chance,” Germany’s Süddeutsche Zeitung proclaimed on August 19. “Russia, Turkey and China are suffering from economic problems, poor foreign policy and Trump’s sanctions policy. They realize that they need Europe.”

Putin had hoped America would supply the economic help nessesary for Syria to remain independent from Europe. But President Trump has objected to such help. Thus, Putin is forced to talk to Merkel. He knows Germany has its own strategic ambitions, so an agreement will require compromise.

Russia and Turkey realize that Syria is lost without European help. Europe and America insisted on a future without Assad. But Russia managed to dominate Syria politically and militarily. It has succeeded in keeping Assad in power and rebel groups out of power.

At this point, it is better for Putin to negotiate with Germany. If he doesn’t, his foreign policy in Syria will end due to a lack of funds.

Germany is inclined to listen. Germany’s Green Party foreign-policy leader Omid Nouripour explained, “Especially in times of the loss of the U.S. as a regulatory power, Europeans have to seek their own solutions.”

Germany wants a Europe-friendly government in Syria. It already has plans to push its agenda forward during its 2019–2020 UN Security Council membership. Germany won’t be able to turn Syria around without Russia allowing it. But Germany won’t rest until it has Syria under its control. In his article “How the Syrian Crisis Will End,” Mr. Flurry explained:

Most people are blind to what is going on in Syria, but we have been showing you for 70 years that the Bible prophesies the future—not only for Syria, but for the whole region and the whole world.

Russia and Turkey are the key alliance for a successful German power grab in Syria. But Germany has said it won’t rebuild a Syria that remains under Assad’s control. Turkey favors a regime change; thus the pressure is on Putin to find a compromise.

A prophecy in Daniel 11 indicates that Russia will allow Germany headway into Syria. The prophecy foretells that Germany will gain control of several Middle Eastern nations until “tidings out of the east and out of the north shall trouble [it]” (verse 44). At that point, Russia and other Asian nations will unite to oppose Germany’s advances. (Request a free copy of Russia and China in Prophecy to learn more.)

The Bible prophesies the Syrian crisis will soon plunge the whole world into a world war. But that’s not the end, Mr. Flurry continued in that article:

It leads to mankind being plunged into the Great Tribulation for 2½ years, and then into the Day of the Lord for a year. But at the conclusion of the Day of the Lord, Jesus Christ is going to return to this Earth and put down all the rebellion against Him. Finally, He will conquer the nations and bring us peace and joy and happiness forever!

Read “How the Syrian Crisis Will End” to find out more on how events in Syria will lead to that wonderful outcome.