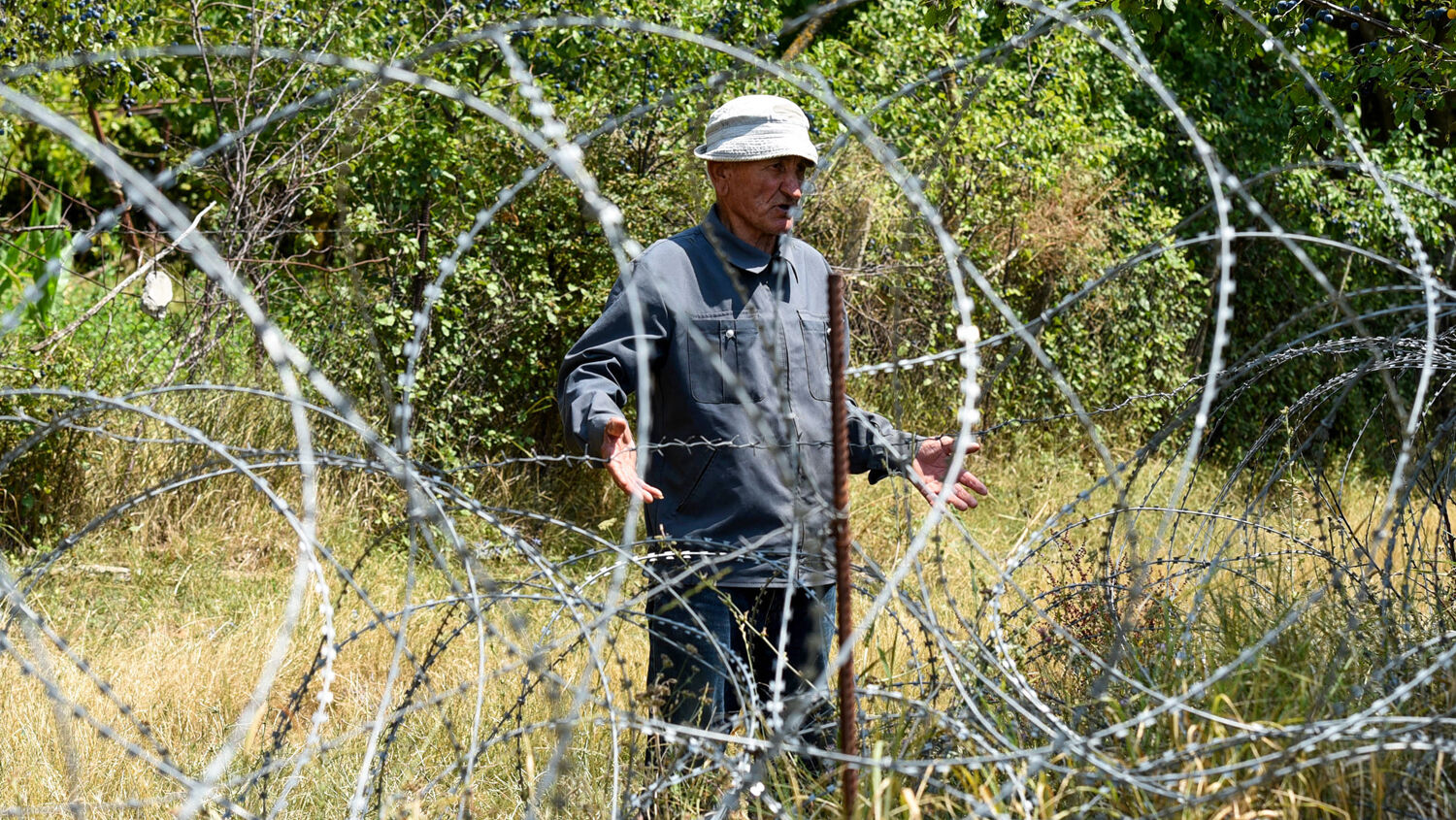 Dato Vanishvili speaks to a journalist on July 25, standing behind a wire barricade erected by Russian and Ossetian troops along Georgia’s de facto border with its breakaway region of South Ossetia in the village of Khurvaleti.
VANO SHLAMOV/AFP/Getty Images

Russia’s invasion of the former Soviet nation was not an anomaly: It is becoming the norm.

Ten years ago this week, Russia invaded the former Soviet nation of Georgia and asserted control over a fifth of its territory. At the time, Trumpet editor in chief Gerald Flurry said Russia’s attack marked the “beginning of a dangerous new era” in history. Now a decade later, it is clear that Mr. Flurry’s forecast was accurate.

Russia’s 2008 invasion pierced the illusion that the interdependence of economies had rendered war obsolete. It proved that Russian President Vladimir Putin was willing to use military force to pursue his nation’s interests.

Within Georgia, there is ample evidence showing that the invasion was just the start. Most notably is that Putin has not been content to simply hold the Georgian territory he illegally invaded and occupied back in 2008. Research by the Heritage Foundation has found that since then, Russia has engaged in 56 incidents of “borderization” at the edges of the areas it controls. In many of these instances, Russian and separatist forces have moved their border southward into the remaining territory that the Georgian government still controls. These incursions often advance just a few yards at a time, but they expand the size of the Russian-controlled areas and they send a message.

“In some cases, Georgians have gone to bed in free Georgia only to wake up in occupied Georgia after Russia constructed a fence around their homes,” the Heritage Foundation wrote. “Farmers have been divided from their crops. In other cases, villages are divided down the middle.”

In one instance, Russia’s “creeping annexation” advanced more than a mile and put part of a major BP-operated oil pipeline under Russian control.

Before the 2008 invasion, Georgia was on track to join the North Atlantic Treaty Organization. The Russian invasion and occupation complicated the process, but last month, nato Secretary General Jens Stoltenberg reaffirmed the alliance’s intention of accepting Georgia as a member.

Putin said such a move would “pose a direct threat” to Russia, and he accused nato of “trying to aggravate the situation.” He warned that the West “should think about the possible consequences of such an irresponsible policy.”

Just after the 2008 invasion, Mr. Flurry said Russia’s aggression would not be limited to Georgia. In the October 2008 issue of the Trumpet, he wrote: “Russia’s attack on Georgia in August marks the beginning of a dangerous new era in history. This was the first military strike of a rising Asian superpower—and there will be more! … Will a crisis occur over Ukraine? That area is the breadbasket of Russia, and surely it is willing to wage war over that as well.”

Five and a half years later, that forecast was proved accurate. In March 2014, Russian forces invaded Ukraine’s Crimean Peninsula and annexed it to Russia. Putin had literally redrawn the borders of Europe—twice.

In the years since, Putin has kept eastern Ukraine in a state of frozen conflict and has continued to hinder Georgia, Ukraine and other former Soviet nations from developing closer ties with Europe. He is even working with Germany to increase his leverage over East European nations. He is also in the process of modernizing the Russian military into a more lethal 21st-century force. He shoved America out of Russia’s periphery in 2014 by persuading Kyrgyzstan to oust the U.S. from Manas Air Base. More recently, Russia has become deeply engaged in the Middle East, sidelining America, helping the tyrannical Syrian regime to hold power, and allowing Iran to maintain its pursuit of nuclear weapons.

Ten years after Russia’s invasion of Georgia, it is clear that the move was indeed a landmark event. It is clear in retrospect that it was “the beginning of a dangerous new era” of Russian aggression, just as Mr. Flurry predicted.

This “new era” is causing suffering for many people in Russia and in the nations where Putin interferes. But Bible prophecy shows that the Putin era will be immediately followed by another much longer era that will bring peace and prosperity for all peoples of the world.

In his booklet The Prophesied ‘Prince of Russia,’ Mr. Flurry shows that Putin is mentioned personally in ancient Bible prophecies. Those Bible passages show that his reign occurs at the end of the age of mankind attempting to rule himself: “Vladimir Putin is a sign, literally a sign, that Jesus Christ is about to return! This is one of the most inspiring messages in the Bible. … We need to watch Vladimir Putin closely. I believe he is almost certain to be the ‘prince of Rosh’ whom God inspired Ezekiel to write about 2,500 years ago! We need to watch what is happening in Russia and how Europe responds to it.”

To understand the details of Putin’s role in Bible prophecy, and the hope-filled “sign” that he represents, order a free copy of Mr. Flurry’s booklet The Prophesied ‘Prince of Russia.’