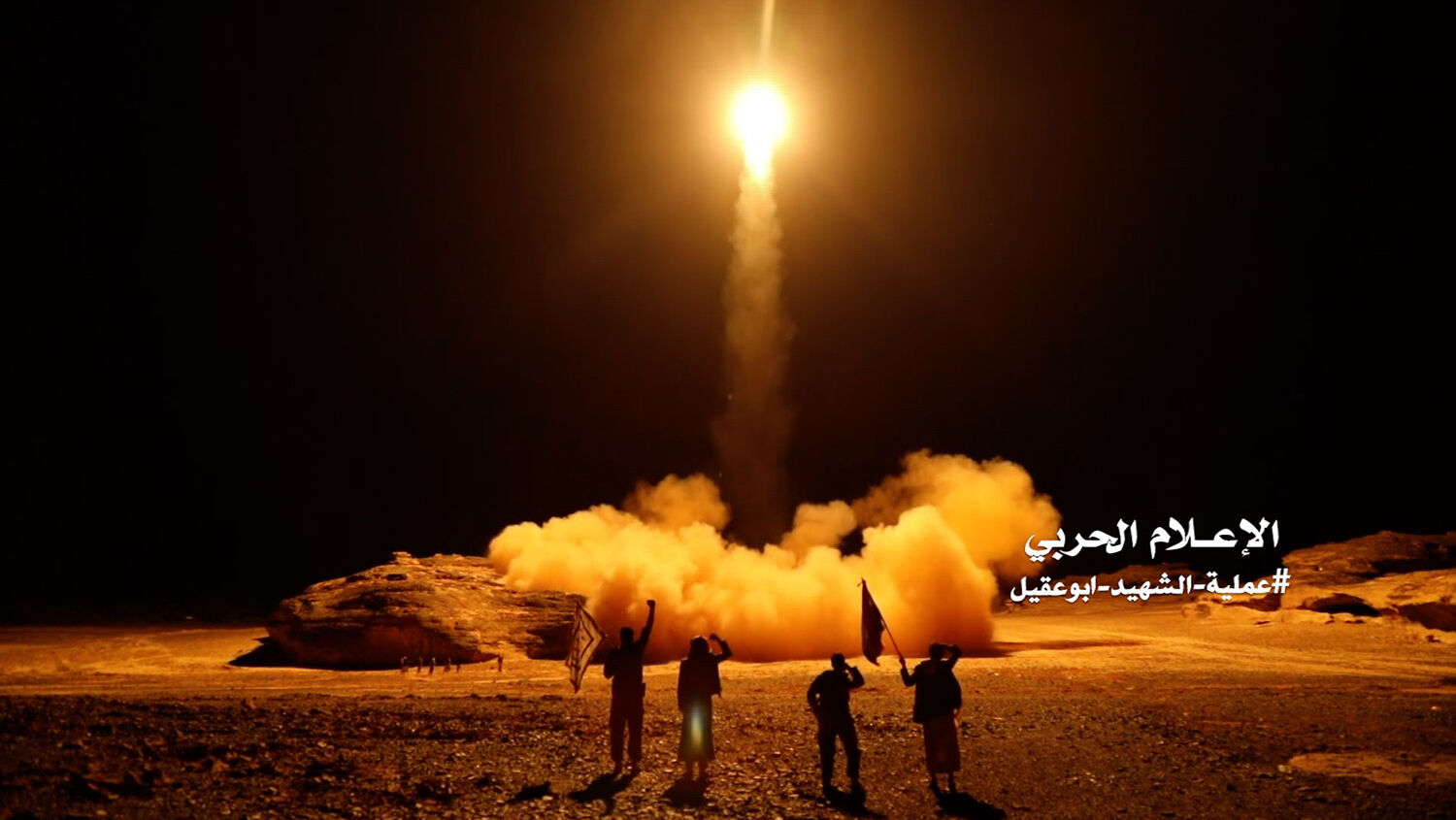 A video handed out by Yemen’s Houthi rebels on March 27 shows what appears to be Houthi military forces launching a ballistic missile on March 25, reportedly from the capital Sanaa.
AFP/Getty Images

It is no coincidence that Iran’s fingerprints are all over Yemeni terrorist missiles.

Iran’s economy might be hurting, but not enough for the mullahs to cut back its terror budget. A panel of United Nations experts presented a confidential report to the UN Security Council on Tuesday. Segments were then released to the Associated Press. The report detailed Iran’s alleged weapons exports to Yemen. Houthi rebels there are using missiles and drones that “show characteristics similar” to Iranian weapons.

The panel stressed that it “continues to believe” Iran has been transporting short- and long-range missiles to the Houthi. This is in violation of a 2015 arms embargo against the Yemeni rebels. The panel said there was a “high probability” that the missiles were manufactured internationally, then sent to the Houthi.

For its part, Iran denied the panel’s claim, stating that the Houthi armaments are merely modified Scud missiles.

The 125-page report included information gleaned from recent trips to Saudi Arabia. As the three-year war in Yemen has intensified, Houthi rebels have made multiple attempts to attack Saudi Arabia’s capital city, Riyadh. The panel was able to inspect 10 missiles fired this year. While Iranian links were visible, the panel also noted parts produced in Japan and Russia.

The war in Yemen has claimed the lives of more than 10,000 people. The Houthi has been accused of using missiles to indiscriminately target civilians. Multiple attempts have been made on Saudi cities, airports and oil production facilities. The rebels have also targeted ships traversing the Red Sea.

The Trumpet is paying close attention to Iran’s efforts to influence the war. Bible prophecy indicates that Iran will control the strategic waterways of the Bab el-Mandeb and the Red Sea. The crisis in Yemen has provided Iran a unique opportunity to deepen its influence in the region. This gives Tehran leverage in one of the world’s most important sea-lanes.

This was highlighted by an important turn in events last week. Saudi Arabia decided to stop sending oil tankers through the Bab el-Mandeb, an indication that Iran’s support of the Houthi is paying off. Be sure to listen to Trumpet Jerusalem correspondent Brent Nagtegaal on the Trumpet Hour segment below.

Watch as Iran continues to establish itself as the gatekeeper of the Red Sea. As Trumpet editor in chief Gerald Flurry writes in his booklet Germany’s Secret Strategy to Destroy Iran, “Yemen is one of the most strategically important countries in the world.” Iran knows it, and is working to exploit it. In April 2011, Mr. Flurry wrote, “Radical Islam could stop the flow of essential oil to the U.S. and Europe.”

Keep watching, because Europe will not let this threat continue. News sources such as the New York Times focused heavily on the UN report’s comments that Iran might want to help end the war in Yemen. But Iran will not back away from its aggressive foreign policy. Daniel 11:40 prophesies of Iran’s pushy foreign policy. And it describes how Europe will suddenly and violently react.

For more information, read our free booklet The King of the South, by Gerald Flurry.