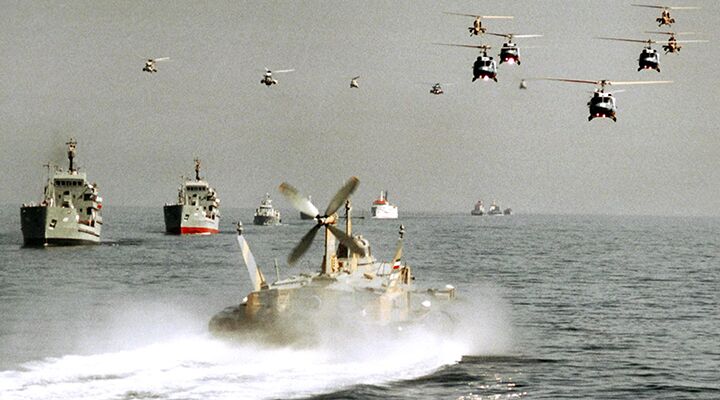 A power grab in Yemen brought Iran much closer to controlling this strategic waterway.

In case you missed it, on September 21, the Islamic Republic of Iran expanded its foreign holdings to include Sanaa, the capital city of Yemen. That same day, Iran also took over Yemen’s al-Hudaydah port, almost 100 miles southwest of Sanaa, on the eastern bank of the Red Sea.

Capturing these Yemeni strongholds indicates Iran is right now pushing to implement its strategy of controlling the Red Sea, as previously forecast by the Trumpet.

To reach the Mediterranean Sea from the Indian Ocean, all seafaring trade, including 3 million barrels of oil per day, must pass through the Bab el-Mandeb Strait. Measuring just 18 miles across, the channel is the closest point between the two landmasses of central Africa and the Arabian Peninsula. The northeast edge of the strait is firmly within Yemeni territory. The strategic importance of controlling this passage is equal to controlling the Suez Canal, since both are part of the same thoroughfare.

To control this trade route, Iran needs to dominate Yemen. That is why the events of September 21 are so significant. Iran did not send its Revolutionary Guard to gain control of the country. Rather, as witnessed in Lebanon with Hezbollah, Iran activated one of its terrorist proxies to do its legwork. In Yemen, “Hezbollah” is Ansar Allah, the military wing of the Shiite Houthi tribe, which comprises 30 percent of Yemen’s population. The majority of the country is Sunni.

In the months before the takeover of Sanaa, the Yemeni government was in disarray as anti-government protests, triggered by rising fuel prices, spread through the capital.

Then on September 21, Ansar Allah simply took advantage of the situation. “Astonishingly,” Arab News wrote, “security forces in Sanaa stood back as rebels went on the rampage engaging in street battles and hoisting their flags over government buildings, banks, [and] the airport, ostensibly to prevent civilian casualties and damage to property.”

In the two months following the capture of Yemen’s capital, the Houthis entered a power sharing agreement with the Yemeni government. Again, this is similar to what happened in Lebanon with Hezbollah. While Iran denies activating and arming the Houthis in the coup, many Iranian personalities could not help but gloat at their achievement.

The Yemeni power-sharing government will only last as long as Iran continues to get its way. Many nations, especially the European nations on the other side of the Red Sea trade, are concerned by Iran’s pushy moves in Yemen. In a November 3 fact sheet analyzing the Iranian takeover of Yemen, Michael Segall wrote (emphasis added):

Iran also sees Yemen as an important factor in its policy of establishing a physical Iranian presence, both ground and naval, in the countries and ports of the Red Sea littoral, which control the shipping lanes that lead from the Persian Gulf to the heart of the Middle East and onward to Europe. If the Shia rebels gain control of the Bab el-Mandeb Strait, Iran can attain a foothold in this sensitive region giving access to the Red Sea and the Suez Canal, a cause of concern not only for its sworn rivals Saudi Arabia, Egypt and the Gulf states, but also for Israel and European countries along the Mediterranean.Arab commentators in the Gulf have warned in recent years about this Iranian push.

While Arab commentators may have speculated about this push in recent years, Trumpet editor in chief Gerald Flurry has warned about this Iranian push for almost a quarter of a century!

Furthermore, in 2011, the Trumpet alerted readers to “Pay Attention to Yemen,” revealing Iran’s plans for the country in light of its Red Sea strategy. As we wrote back then, “[W]hat does Iran expect to gain by establishing a strong presence in Yemen? Take a look at the accompanying map [above]. Basically, Iran wants Yemen for the same reason it wants Ethiopia, Eritrea and Egypt: to control the red sea!”

Now that Iran has taken over Yemen, its strategy to control the waterways between the Persian Gulf and the Mediterranean nears completion. To understand where these events are headed, read “Libya and Ethiopia Reveal Iran’s Military Strategy.”