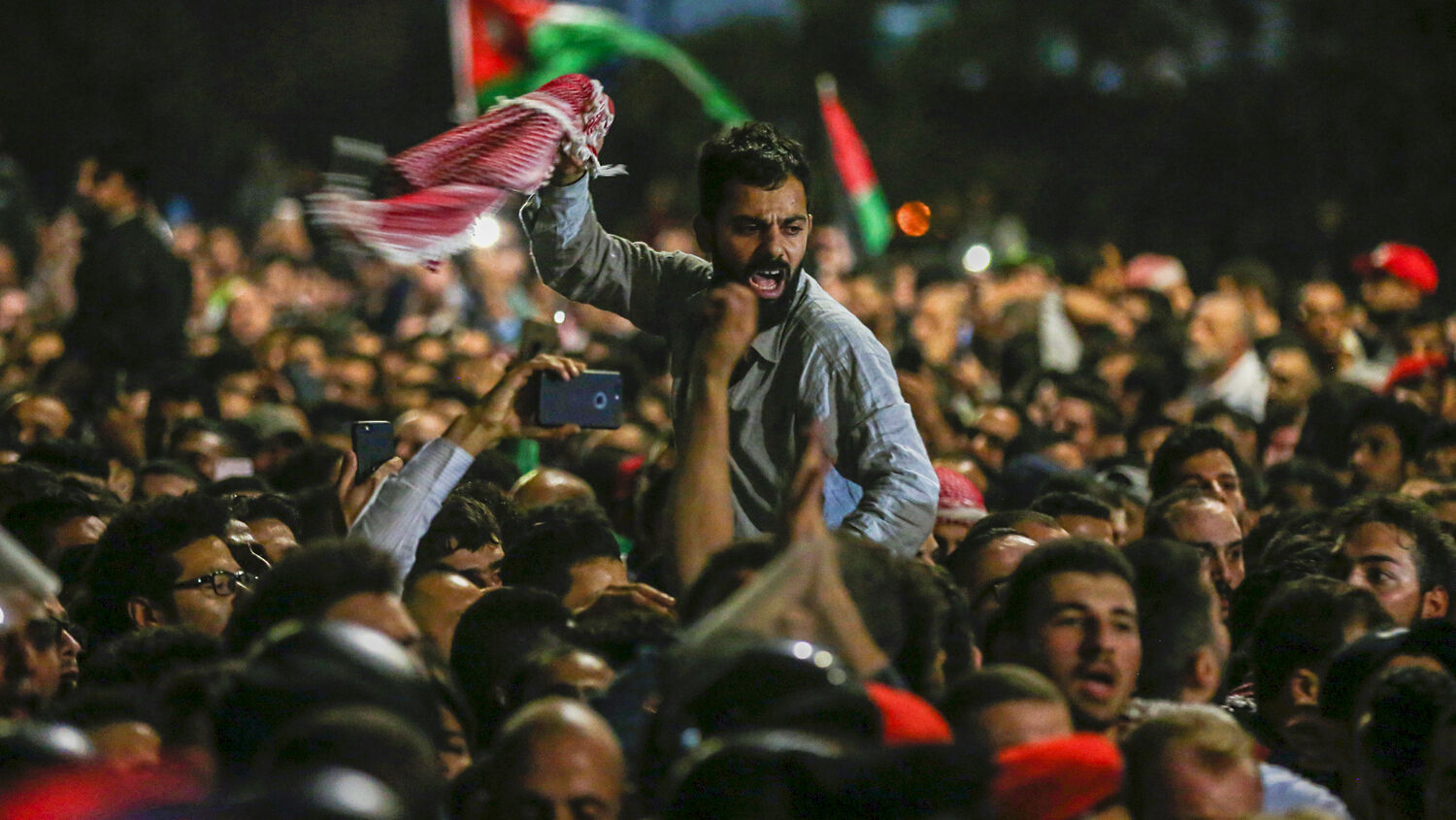 Jordanian protesters shout slogans and raise a national flag during a demonstration outside the prime minister’s office in the capital Amman late on June 2.
KHALIL MAZRAAWI/AFP/Getty Images

For seven days Jordanians have been protesting their government’s recently implemented austerity measures and tax increases, sparking some concerns about an imminent uprising akin to the Arab Spring.

The Arab Spring uprisings toppled a handful of governments in the Middle East. “[T]he region isn’t a stranger to instability,” Geopolitical Futures noted on June 5, “but Jordan is.” The protests are the biggest the nation has seen in years. Protesters reportedly blocked roads with vehicles, rocks and burning tires. They attacked at least 40 security officers with fireworks and unspecified “cold weapons.” Authorities reportedly detained dozens of protesters.

The protests began last Wednesday when the government of Prime Minister Hani al-Mulki slapped taxes on agricultural products and scrapped subsidies on basic goods and commodities. The austerity measures were part of the conditions imposed by the International Monetary Fund for its financial assistance to the small, fiscally challenged kingdom. “Public protests against rising bread prices started six months ago with a handful of unemployed people in isolated locations and evolved [last week] into organized demonstrations involving multiple groups and thousands of protesters,” reported Geopolitical Futures.

The protests compelled Jordanian King Abdullah ii to demand Mulki’s resignation and replace him with Education Minister Omar al-Razzaz on Monday. King Abdullah charged the new government to “avoid continuing to impose unfair consumer taxes that do not achieve justice and balance between the income of the poor and the rich.” He even ordered a review of the nation’s tax systems.

This wasn’t enough for some protesters who continued their demonstrations against the government. One of the banners they waved read, “We don’t want a change of names; we want a change in policy.” Another read, “Bring back bread subsidies.”

Some analysts say the government’s austerity measures were merely the proverbial straw that broke the camel’s back. “It is true that the crisis seems economic and financial, linked to budget, taxes, deficit and budget, or the decline in investment and growth, the high unemployment rate and increase in prices, but the essence, in fact, is purely political,” Mohammed Abu Rumman wrote for the Middle East Monitor. “It is linked to the growing gap between the political class and the social classes, both the middle class and the generation of globalized youth.”

Regarding some of those youth, Geopolitical Futures wrote:

According to Al-Jazeera, this weekend’s protests in Jordan were led in part by a youth movement called Hirak Shababi, which Israeli intelligence accused in 2016 of being directed and funded by Hezbollah, Iran’s longtime proxy in Lebanon. The Israeli Defense Ministry promptly outlawed the group …. Though Iran has not been directly linked to the group’s operations in Jordan, the possibility must be raised given how it would help further Iranian interests in the region.

King Abdullah acknowledged Jordan’s vulnerabilities when he wrote on Twitter: “The regional situation surrounding #Jordan, the closure of traditional markets for Jordan’s exports, and the high cost of securing our borders have been and still are the main reasons for the difficult economic conditions we are facing.” He also wrote: “The world has fallen short; international aid to #Jordan has dropped despite the burden we shoulder to host Syrian refugees. Jordan is dealing with unanticipated economic and regional changes. No plan could have mitigated these challenges quickly and effectively.”

The king warned on Monday that his country was standing “at a crossroads: either it can come out of the crisis and provide a dignified life to our citizens, or, God forbid, it can go into the unknown.”

There are indeed a number of unknowns in these developments. But what the Trumpet knows for certain is that the kingdom of Jordan will not experience a devastating Arab Spring or civil war similar to what has happened in Libya, Iraq and Syria. The Bible indicates that, no matter how much they might try, radical Islamists will not take over Jordan.

Radical Islam is plotting to take over the small, weak nation of Jordan. Already, Iran and the radical Islamist camp have gained heavy influence over several powerful nations in the Middle East—Egypt, Iraq and Libya—and they are on their way to fully taking over these nations. Now the sights of radical Islam are also set on Jordan.

Jordan’s leader, King Abdullah, is deeply concerned, and for good reason. The Muslim Brotherhood, an Islamic organization with a radical past and aggressive ambitions, is trying to hijack the king’s efforts to reform his nation. “The king has replaced three prime ministers since the ‘Arab Spring’ began and has thrown a number of former officials into prison, but all this has not satisfied the Muslim Brotherhood,” the Gatestone Institute reported on May 30, 2012. “[A] Jordanian official said that his government has proof that ‘outside forces’ [that would be Iran, mainly] were backing Muslim Brotherhood’s scheme to ‘spread chaos and anarchy in the kingdom’ by exploiting demands for reform and democracy.”

Mr. Flurry wrote this booklet back in 2013! He continues:

Several powerful Middle Eastern nations haven’t been able to withstand the infiltration of the radical Islamist camp, or the “king of the south,” as the Bible calls it (Daniel 11:40). And now the gaze of radical Islamism is turning to this smaller and weaker nation.

Yet for more than 50 years, God’s Church has said that the little nation of Jordan will not fall to the king of the south.

How could we possibly know that? When radical Islam is taking over powerful Middle Eastern nations, how can we say it will not take over Jordan? Because it is prophesied in your Bible. You can prove that, and you need to prove it because this is leading very quickly to the most momentous events you’ve ever heard of.

Bible prophecy reveals that Jordan is to receive some special protection from God.

If you haven’t already, request Mr. Flurry’s free booklet Jordan and God’s Church in Prophecy. Read our article “The Last Peacemaker” for more information on the history and prophecy of Jordan.