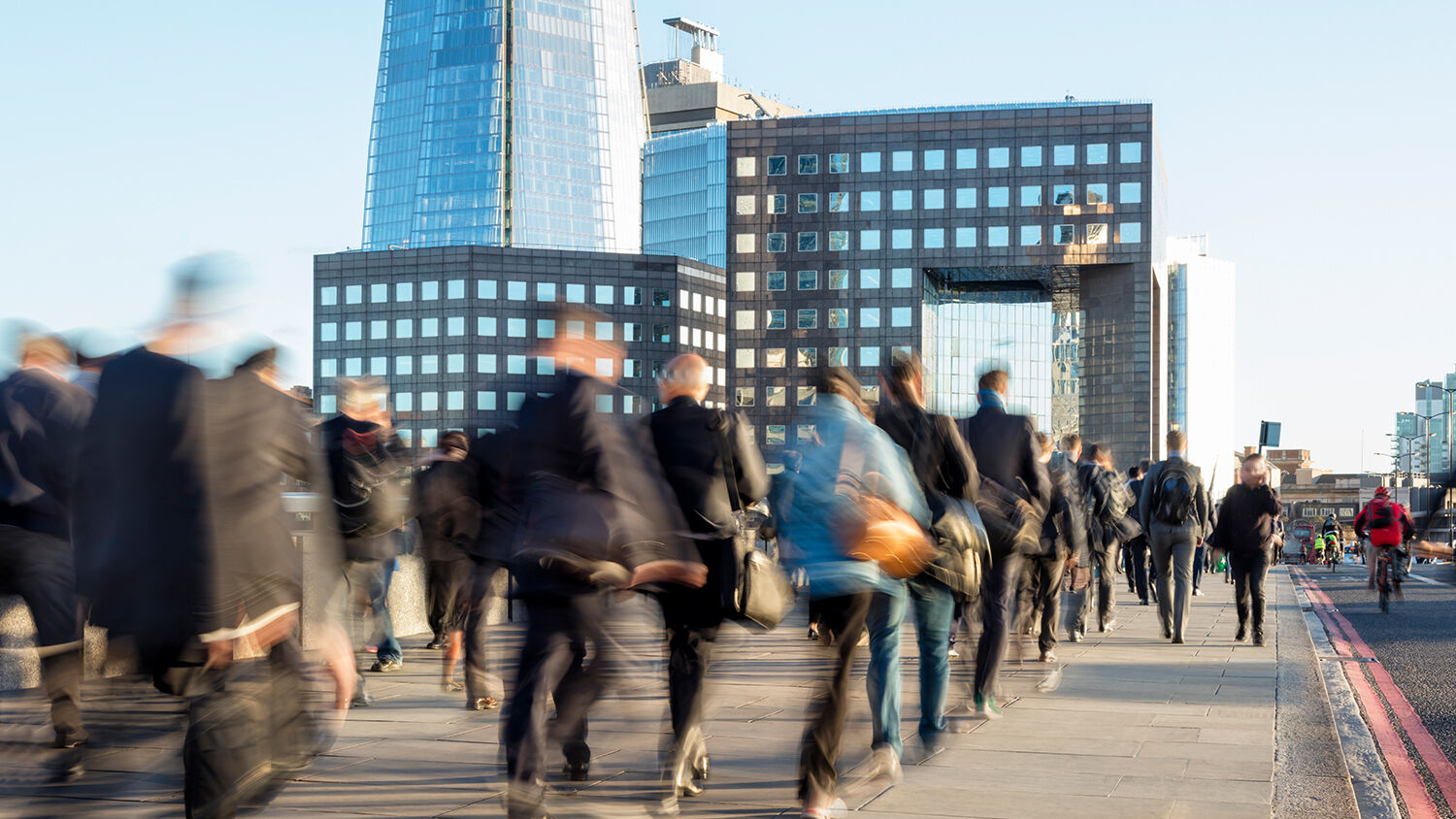 Greetings from the miserable, impoverished land of Great Britain—at least that’s the picture the New York Times painted earlier this week with a long feature article, “In Britain, Austerity Is Changing Everything”:

A walk through this modest town in the northwest of England amounts to a tour of the casualties of Britain’s age of austerity.

The old library building has been sold and refashioned into a glass-fronted luxury home. The leisure center has been razed, eliminating the public swimming pool. The local museum has receded into town history. The police station has been shuttered.

Except none of that is true. This is the introduction to a front-page, above-the-fold, New York Times article—and everything in it is fake news.

It’s also a great example of how the left-wing media deceives readers. In the narrowest sense, every statement is correct. But also in every statement, the most important facts are left out, creating a completely false picture.

The old library building has indeed been sold. But the Times fails to mention that the library itself has moved. It’s now in a modern facility. One leisure center was razed, but the other one, the Prescot Soccer & Leisure Centre, still exists. Technically Prescot has lost its only public swimming pool, but there’s another center less than a mile outside town, and it has two.

The local museum has only kind of “receded into town history.” There is still a museum, the Prescot Museum; it just moved. And on the site where the museum formerly stood, construction is proceeding on a £26 million (us$35 million) government-funded Shakespeare playhouse. (This is also something the New York Times omitted.) The police station has indeed been shuttered, because a new facility for the police and firefighters opened in January. Rather than lose a police station, Prescot has gained a fire station—this is the first time it has had one since 1946.

Why not report the full facts? Why twist the narrative? Why not pick some other town where “austerity is changing everything” so you don’t have to cravenly mislead people about Prescot?

If the New York Times wants to write about cities that have become disaster zones, there are plenty of cities available to describe without resorting to a string of half-truths.

A United Nations envoy visited San Francisco a few months ago. She said it matched conditions she’d seen in Mumbai and Mexico City. An nbc report earlier this year examined 153 blocks of the city. Reporters found rubbish on every block, as well as 100 discarded drug needles and 303 piles of human feces.

Seattle is facing similar problems. The city has 12,000 homeless people in the metropolitan area, the third-largest in the country. “Tents abound, even downtown,” wrote the Weekly Standard. “It’s hard to find a bridge that doesn’t have people sleeping under it.” “We’re in kind of a perverse competition with San Francisco,” said the executive director of Downtown Emergency Service Center, Daniel Malone. Public health officials warn that diseases are spreading among the homeless.

Yet the New York Times won’t focus on these cities, because they don’t advance the newspaper’s left-wing narrative. San Francisco hasn’t had a Republican mayor since 1964. Fewer than 10 percent of voters there cast a ballot for Donald Trump. The city is supported by wealthy businesses—not just through taxes but also donations. It spends more than $11,500 per resident, more than any city in the United States. Seattle spent $68 million last year trying to fight homelessness. That’s around $5,600 per homeless person. And it’s still not enough. The city government is now introducing a new tax on big companies with headquarters in the city. Even the notoriously left-wing Starbucks Corporation is criticizing the city, saying that it “continues to spend without reforming and fail without accountability, while ignoring the plight of hundreds of children sleeping outside. … [N]o one believes they will be able to make housing affordable or address opiate addiction.”

But the New York Times believes that more government control—and especially more government spending—is the solution. Examples where this spending has clearly failed are ignored. Instead they focus a lead story on Prescot, making painful contortions of the facts to paint it as the victim of a cruel government that only cares about the rich and won’t spend enough money on the poor.

Which is why the article is full of more serious errors than just confusion over a relocated museum. It states “the protracted campaign of budget cutting, started in 2010 by a government led by the Conservative Party, has delivered a monumental shift in British life” (emphasis added).

The truth? In 1997, Britain’s Labour government came into power and dramatically expanded the role of the government in the economy and lives of the people. For the financial year beginning in 1997, government spending was around £480 billion (adjusted for inflation), or $637.8 billion. When Labour left office in 2010, it had exploded to £760 billion (more than $1 trillion). The government went from spending 36 percent of the nation’s income to 46 percent. That was the “monumental shift in British life.”

Faced with Britain’s highest debt since the 1960s (when it was still paying off World War ii loans), the new Conservative government that replaced Labour in 2010 had to make cuts. By 2015, government spending had fallen slightly, to £740 billion. It’s still at roughly the same level today.

That’s it. That’s the “age of austerity”—a cut of £20 billion over the course of five years. But to the New York Times “this is akin to setting your house on fire and then reveling in the community spirit as neighbors come running to help extinguish the blaze.” A £20 billion cut is not wholesale destruction. How did the nation survive back in the ’90s, when spending was £300 billion lower?

The New York Times points to plenty of bad news and emotional personal stories. But once again, it omits major facts that show the full picture.

The New York Times wrote that Britain is struggling “with itinerant jobs replacing full-time positions and robots substituting for human labor.” In reality, over a million more workers are working full-time jobs than at the start of this “age of austerity.”

The New York Times complained about cuts in funds spent on the elderly. It neglected to mention that the number of pensioners living in poverty is at an all-time low.

From the start of the Conservative government, left-wing economists predicted that Britain’s “cuts” and “age of austerity” would be a disaster. (Practically speaking, “austerity” just means a government slightly slowing down its massive spending binge.) In 2009, just before the election, Danny Blaunchflower, formerly of the Bank of England’s Monetary Policy Committee, predicted that “attempts to cut public spending and withdraw monetary and fiscal stimulus too soon may push unemployment closer to 4 or even 5 million.” Instead, it peaked at 2.5 million, and has now fallen to 1.4 million. Paul Krugman at the New York Times said that the nation’s “experiment in austerity” was “going really, really badly.” In 2012, he said that the nation would “continue on a death spiral of self-defeating austerity.” He said that it would cause a double-dip recession—where the economy appears to be recovering, before crashing again.

Having made such predictions, these economists now look rather silly. Government spending has fallen, and economic indicators have improved. The idea that government spending is the solution to every problem has taken a big hit. Yet rather than changing their views or at least quieting down for the time being, the New York Times’ editors doubled down on their ideological premise—and since the facts in Prescot didn’t fit their preconceived narrative, they made them fit (its massive, black-and-white “Truth” ad campaign notwithstanding).

The New York Times had the entire United Kingdom to cherry-pick a town that would support its ideological bias. And Prescot was the best example it could find? And it still had to distort fact after fact in order to claim that “austerity is changing everything”?

Britain has many problems. The Trumpet is quick to keep you up-to-date with these serious issues. But too little government spending is not one of them. Quite the contrary: Even in the “age of austerity,” Britain’s debt is still huge. Unlike a reduction in government handouts in Prescot, this poses a real threat to the nation and to individuals.

The fact is, all of these cities—Prescot, San Francisco and Seattle—are short of more than money. In 1981, Herbert W. Armstrong summed it up: “[A]ll of our problems that we can’t solve—all of our troubles and evils—are spiritual in nature.”

“All of our accomplishments are physical and materialistic in nature,” he said. “But the human mind is so constructed [that], without the Holy Spirit of God, it cannot understand, it cannot conceive spiritual truth or spiritual knowledge.” That same year he said:

It’s awesome, the things we can do. Look at the wonderful machines man has made. Look at the conveniences we have that man has been able to think out, and invent, and the things that man can do. But every one of those things is physical and material. Man cannot do spiritual things. Man goes to the moon and back safely, and then divorces his wife, or she divorces him. The family is broken up. Why? We do wonderful things. But the wonderful things that man has accomplished are all physical and material. But, when you get into his troubles, he is full of troubles; and he can’t solve his troubles. Why? His troubles are spiritual in nature.

Crises like the decline in family, not the tiny decline in government spending, are causing the problems in Britain, America and the rest of the world. You can read more about this in our article “Why the Trumpet Watches Moral Decline in Britain and America.” And we’ll keep updating you on Britain’s real problems, their causes and their solutions, here at theTrumpet.com. Because you won’t get that from the New York Times.