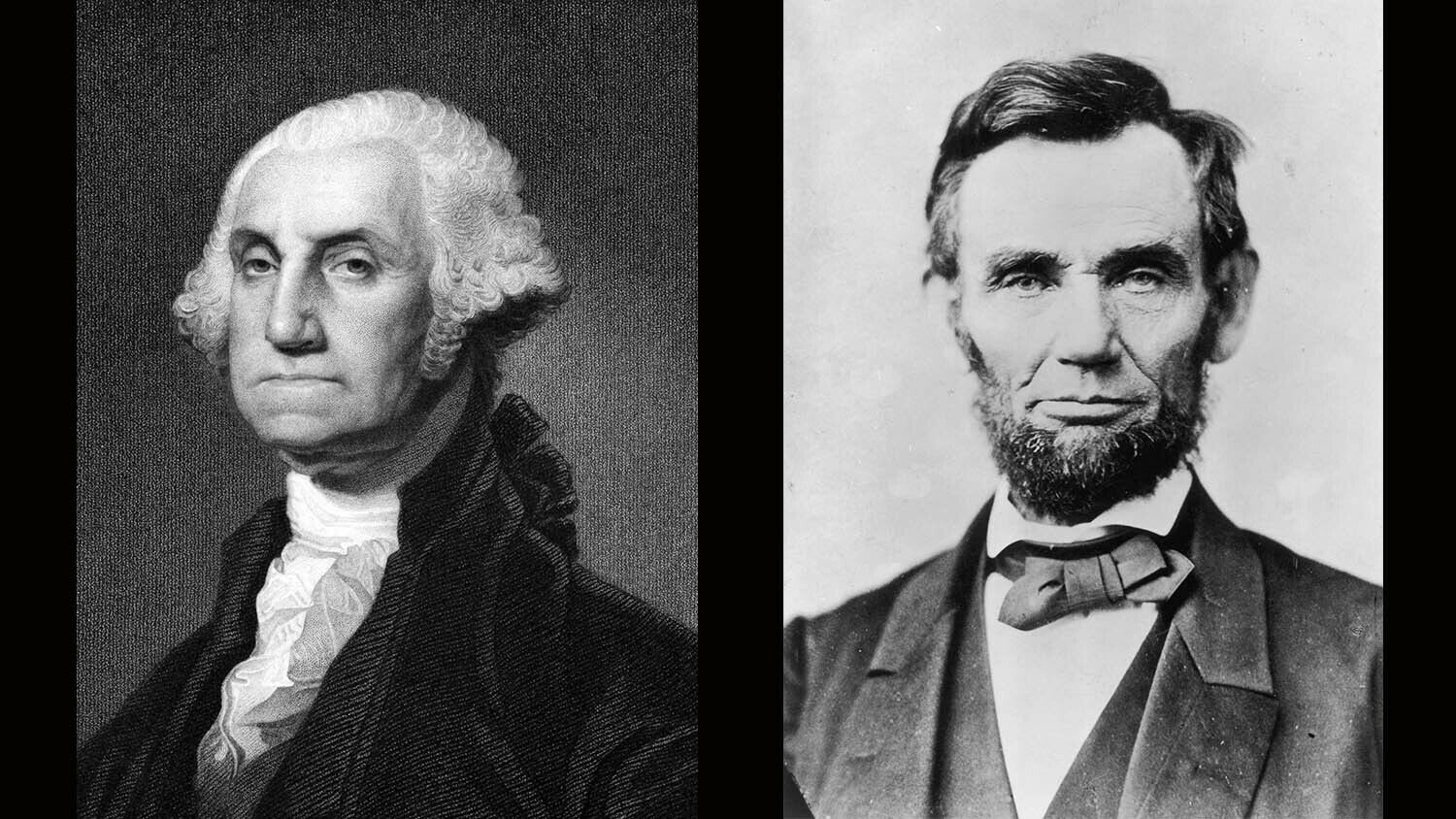 Nearly every historian believes that George Washington and Abraham Lincoln were America’s two greatest presidents. These men faced monumental crises—survival-of-the-nation problems. And if you look at their inspiring examples, you can see how they met and conquered those crises.

These great men actually gave a warning that the American people should heed today. President Washington and President Lincoln showed us how to solve our nation’s major problems. If we followed their examples, we could do the same today. That may seem astounding, but it is the inspiring truth of history!

Really, this applies to all the Western world and anybody who would apply these lessons. Even if our nations do not follow these examples, God says He will save us individually if we do so.

America’s earliest settlers believed that America was the new Israel. They didn’t know that this belief was literally true. (Request our free book The United States and Britain in Prophecy for proof.) In his book Our Sacred Honor, William J. Bennett writes: “What made this country different from all others was a prevalent belief that God played a direct and active hand in founding a people. Like the Jerusalem of old, America’s ‘New Jerusalem’ was to become God’s promised land to the oppressed—an example to all humankind.”

Early Americans believed it was their destiny to set an example for the world!

In his inaugural address on April 30, 1789, George Washington said, “[T]he foundations of our national policy will be laid in the pure and immutable principles of private morality ….” In other words, private morality is not a peripheral issue; it is foundational.

In his farewell address in 1796, Washington said, “Of all the dispositions and habits which lead to political prosperity, religion and morality are indispensable supports.” He knew that without religion and morality, America was doomed. Washington continued, “In vain would that man claim the tribute of patriotism who should labor to subvert these great pillars of human happiness, these firmest props of the duties of men and citizens.”

Historians believe that America wouldn’t even exist without the leadership of George Washington. God was with him, the first great American warrior.

President Washington believed, in essence, that character is everything. “We have now a national character to establish,” he said. In political campaigns today, character isn’t mentioned at all. Most Americans seem to think it has no bearing on a man’s fitness to govern. Private morality and public duty are considered separate issues. Washington would have been appalled by that kind of thinking!

America’s second president, John Adams, followed Washington’s lead. He said that the foundation of national morality “must be laid in private families.” He also said, “Our Constitution was made only for a moral and a religious people” (emphasis mine throughout).

“Early American society was one built around the biblical sanctity of marriage and family,” writes Angelo Codevilla in The Character of Nations. “Since the founders had no doubt that popular government is possible only among virtuous people, they revered marriage as few people before or since.” Those early Americans were right: Strong marriages and families are crucial to national success! If you understand what the Bible teaches about marriage, you can see why their reverence for this institution was so important. Scripture shows that God designed marriage and family for many vital reasons. Marriage is a God-plane relationship—a type of the saints’ marriage to Jesus Christ at His Second Coming!

French historian Alexis de Tocqueville wrote, “Religion and morality were indispensable to the maintenance of the American republic. While the constitutional law of liberty allowed Americans complete freedom to do as they pleased, religion prevented them from doing that which is immoral and unjust.”

Tocqueville surmised, “Liberty could not be governed apart from religious faith, lest there be anarchy.” America’s founders knew that the Constitution allows humans tremendous freedoms, so there must be some kind of restraint to prevent lawlessness. That restraint is religion and morality.

Today, those restraints have been largely cast aside in American society! If the founders were correct—that these restraints were “indispensable” to our national survival—then this has grave implications for America’s future! The abysmal state of America’s character, its religion and morality, is putting the nation’s survival in grave danger!

Early Americans considered themselves “new Israel” and looked to the example of biblical Israel. Anciently those Israelites were delivered from slavery in Egypt. At Mount Sinai, God delivered to them a moral code—the Ten Commandments, and a civil law, which they agreed to obey. However, they then rebelled and, as punishment, they were forced to wander in the wilderness for 40 years. When all the rebellious adults died, God used Joshua to lead the next generation into the Promised Land.

After Joshua died, Israel ran into real trouble, entering a period of unparalleled lawlessness and rebellion. You can read about this in the biblical book of Judges, which is the bloodiest book in the Bible! The general moral condition of the nation is summarized in this verse: “In those days there was no king in Israel: every man did that which was right in his own eyes” (Judges 21:25). When Israel lost its strong leader and cast aside character, it led to anarchy and, eventually, captivity! The book of Judges is part of the former prophets, which are prophecy mainly for today.

Is there any better description for what is happening in America today than everyone doing what is “right in his own eyes”? Immorality is rife within the American populace. And we have the government we deserve. Core institutions of American society can no longer be trusted because of a lack of strong religion and private morality—and institutional morality. Unsurprisingly, these institutions are held in contempt today. Congress has about a 17 percent approval rating. The Federal Bureau of Investigation and the Justice Department have betrayed the American people by trying to overthrow the fairly elected president. There is a war going on within the very highest levels of government! This is a curse on our nation!

Tocqueville wrote, “Any free society founded on liberty, yet without a sacred moral code to govern the actions of individuals, cannot stand.” Look at the embarrassing spectacle in America today, and you have to say that it proves Tocqueville right!

Abraham Lincoln dealt with a nation that was ripped in two by civil war! He knew firsthand just how dangerous division within a nation can be. Surely Americans can recognize just how divided we have become. Should we not listen to what one of our greatest-ever presidents said on this subject?

“In my opinion, [national division] will not cease until a crisis shall have been reached and passed,” he said in 1858. Why must we suffer through a crisis to learn these lessons? Lincoln continued, quoting from the Bible, “A house divided against itself cannot stand.”

Attitudes among Americans today are similar to those of Americans before the Civil War! We are a house divided! And the division is going to have some terrifying consequences.

America is on the brink of destruction! Do people really not recognize the danger? People are fighting each other over political differences, racial differences, ideological differences, and they don’t even seem interested in coming to agreement—they just want to destroy each other! And in so many cases, they are telling and believing lies so rank and abominable you couldn’t even impose them on a child ordinarily!

On March 30, 1863, Lincoln issued a proclamation designating a day of prayer and fasting. “We have been the recipients of the choicest bounties of heaven,” he wrote. He was right! We enjoy what the Bible calls national “birthright blessings” from God! “We have grown in numbers, wealth and power as no other nation has ever grown,” he continued. “But we have forgotten God.”

Would a president today ever stand up and admit that we have forgotten God? The scorn and ridicule he would suffer for doing so would be beyond imagination!

“[W]e have vainly imagined, in the deceitfulness of our hearts, that all these blessings were produced by some superior wisdom and virtue of our own,” Lincoln continued. “It behooves us, then, to humble ourselves before the offended power, to confess our national sins, and to pray for clemency and forgiveness.”

Lincoln’s national day of prayer and fasting healed the nation. This is the truth of America’s history.

In a previous proclamation, on Aug. 12, 1861, Lincoln urged Americans to “humble ourselves before Him and to pray for His mercy—to pray that we may be spared further punishment, though most justly deserved.” Who in America, Britain or the Jewish state in the Middle East could issue strong correction like this today and actually be heard?

As Lincoln left Illinois for the White House, he spoke to those gathered for his departure: “Unless the great God who assisted [George Washington] shall be with and aid me, I must fail. But if [He] shall guide and support me, I shall not fail, I shall succeed. Let us all pray that the God of our fathers may not forsake us now.” In other words, the only way to succeed is to follow Washington’s example and look to God!

Will America take this route today? Will we follow George Washington and Abraham Lincoln and go to God to heal our nation? Will we confess our sins?

This is America’s own history—the greatest history you can imagine if you really understand it. Think on these examples, and you can see why these two presidents were so great. There was a reason, and it goes far beyond mere human ingenuity!

Lincoln did all he could to unify the nation. He called for all Americans to humbly seek God. He believed the words of Christ: “And Jesus knew their thoughts, and said unto them, Every kingdom divided against itself is brought to desolation; and every city or house divided against itself shall not stand” (Matthew 12:25).

Notice that: Every house—every family! That means private morality! A family must be united if it is to stand. You cannot be divided and have a beautiful family. A nation cannot remain strong if it is consumed by infighting!

God will still look after you and protect you individually if you will obey Him. Establish that private morality and religion in your own life! The scriptures make it plain and show it gets right down to the family! That is where you must begin. Strong, moral families are the backbone of your entire nation! We must look to God and humble ourselves before Him. That is really at the heart of the magnificent examples that President Washington and President Lincoln set for us, and that is how we can solve all our problems!