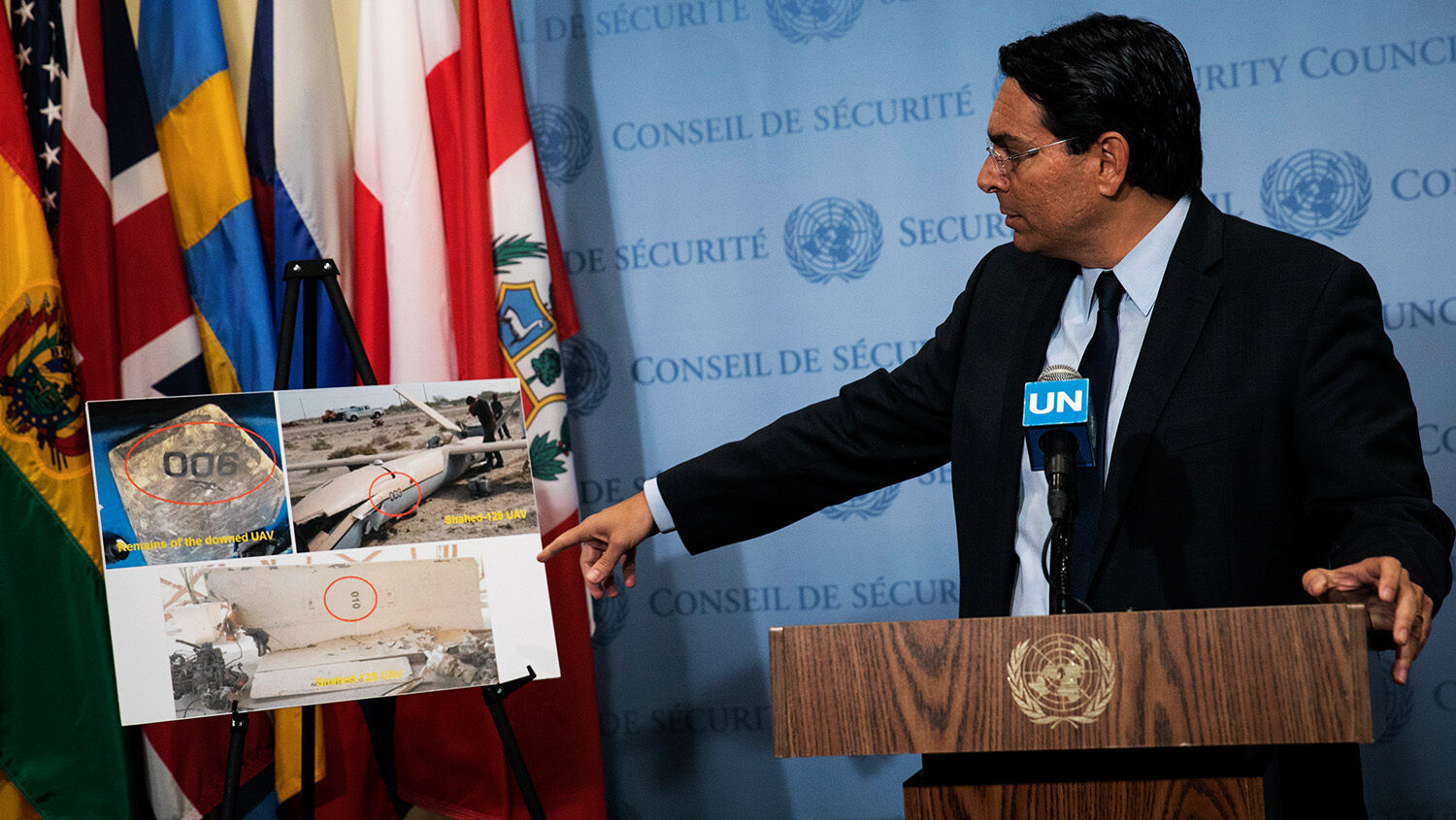 Israeli ambassador to the UN Danny Danon points at a photograph of what he claimed to be an Iranian drone launched from Syria that was equipped with an offensive weapon intended to be used against Israel, during a press briefing before a UN Security Council meeting at UN headquarters on April 26, in New York City.
Drew Angerer/Getty Images

‘Iran is now sufficiently emboldened as to directly attack Israel.’

On February 10, an Israeli Army helicopter shot down an Iranian drone that had penetrated Israeli airspace from Syria. With that, a new, dangerous period began in the decades-old war between Israel and Iran. But just how dangerous it was remained largely unclear until the Israeli military allowed the media to report more about it two months later on April 13.

Until February 10, Iran had always attacked Israel via its terrorist proxy entities. But on that day, the world’s foremost state sponsor of terror proved ready and willing to directly send forces against Israel.

The Iranian Quds Force, the elite unit of the Islamic Revolutionary Guard Corps responsible for covert operations in other countries, dispatched a drone from Syria’s T4 air base into northern Israel. Initial reports said the drone was a mere spy aircraft. But on April 13, the spokesman for the Israel Defense Forces (idf), Brig. Gen. Ronen Manelis, said, “[I]ntelligence and operational analysis of the parts of the Iranian unmanned vehicle” and its flight path indicate that “the aircraft was carrying explosives” to conduct “an act of sabotage in Israeli territory.”

“This is the first time we saw Iran do something against Israel—not by proxy,” a senior Israeli military official told New York Times columnist Thomas Friedman. “This opened a new period.”

On April 9, just four days before Israel revealed exactly what Iran had done in February, the idf bombed an Iranian facility at Syria’s T4 military base, killing seven Iranians. The facility was Iran’s center for drone operations—the same one that had launched the armed drone in February. Iran was building it into a fully functional air base, purportedly to protect its interests from Israel. The upgrades to the installation would have given Iran the ability to launch surface-to-air missiles at Israeli targets, accurate to within about 50 meters.

“We are facing a new reality,” said Israeli Defense Minister Avigdor Lieberman. “[T]he Lebanese Army, in cooperation with Hezbollah, the Syrian Army, the Shiite militias in Syria and above them Iran—are all becoming a single front against the State of Israel.” David Horovitz wrote for the Times of Israel that the Iranian regime is “now sufficiently emboldened as to directly attack Israel.”

But so far, as the Bible prophesies, Israel is operating “as a lion” that has its hand “in the neck of [its] enemies” (Genesis 49:8-9). These two verses “give us great insight into the people of Judah, or the Jews in the Middle East,” writes Trumpet editor in chief Gerald Flurry in his free book The Key of David. He continues:

In verse 9, God uses the phases of a lion’s life to describe these people. …

Historically, and even in our time, the Jewish people have exhibited many lion-like qualities. God warns at the end of verse 9 that all should be careful not to rouse the lion of Judah. In other words, leave him alone if he is at rest, or you will rouse his wrath.

Verse 8 states that Judah’s brethren would praise him [partly because of] the many benefits that Judah’s warlike qualities brought to the nation. It is a prophecy that Judah would have its hands on the necks of its enemies. Historically, Judah has had a rousing, warlike quality that gave security to the nation. From Numbers 2:3 we learn that while in the wilderness, Judah was assigned to take the lead in all marches. This was an impressive position of honor. Judah received the first lot in the Promised Land. Caleb, a great-grandson of Judah and one of the original 12 spies, had skill and mighty strength as a warrior (Joshua 14:11). And of course, the greatest Jewish warrior of all time was King David. There is no doubt he fought like a lion.

In our recent past, when the Jews had more faith, they were a terror in the Middle East.

After the April 9 attack, Iran’s Foreign Ministry said, “The Zionist entity will sooner or later receive the necessary response and will regret its misdeeds.” Another senior Iranian official with close ties to Supreme Leader Ayatollah Ali Khamenei said, “Iran has the capability to destroy Israel, and given the excuse, Tel Aviv and Haifa will be razed to the ground.”

In the conclusion to his Times of Israel article, Horovitz wrote,

Iran’s top priority right now is not to engage Israel in serious conflict from Syria. It is not frantically rushing to build up its forces on the Syrian side of the Golan. It is, rather, seeking to gradually establish a robust military infrastructure deep in Syrian territory—taking the longer view.

That analysis is very plausible. The regime of Bashar Assad, Iran’s ally in Syria, continues to face serious threats after more than seven years of civil war. Russia has lent its support as well, but Iran’s position in Syria has been undercut by recent U.S., British and French air strikes in Syria and by increasing military pressure on Iran from Saudi Arabia and other Sunni Arab states.

Another reason Iran might be taking the longer view is its concerns about its tanking economy. “But economic restraints have never stopped [Maj. Gen. Qassem] Suleimani and his Quds Force before and may not now,” concluded Friedman. “Their ambitions are big—to create a base to pressure Israel directly, to dominate the Arab states around them, and to maintain the fervor of the Islamic Revolution. Everyone is basically awaiting Suleimani’s next move. Does he back down, lose a little face, and wait until he is stronger? Does Israel let him? These are momentous days for both countries. One thing I know for sure. The status quo is not sustainable.”

The Bible indicates that sooner or later, Iran will indeed trigger a severe crisis in Israel—indirectly via the Palestinians and, quite possibly, directly. We certainly have entered a period of a much more emboldened and dangerous Iran—one where Israel’s impressive lion-like qualities will, without God’s intervention, prove insufficient.

Bible prophecy mentions an end-time “king of the south.” This is referring to radical Islam, led by Iran. (Read The King of the South for proof.) Its foreign policy, as the Bible says, includes aggressive “pushing,” i.e. terror.

In The King of the South, Mr. Flurry quotes an August 2003 intelligence brief by Stratfor that stated, “The threat of an Islamist rising from the Mediterranean to the Persian Gulf no longer is an interesting theoretical concept. Except for Jordan, it is becoming a reality.”

Using Bible prophecy as his guide, Mr. Flurry then explains:

The reality of an Iran-led Islamist rising throughout the region has grown dramatically in the years since Stratfor wrote those words! That is because still no one has effectively confronted Iran! …

The real power behind the Palestinians is Iran. No other nation would dare finance and blatantly encourage such terrorism in Israel. Iran has even been caught publicly sending enormous amounts of weapons to the Palestinians. Virtually the whole world knows what Iran is doing, and Israel’s terrorist problem keeps rapidly getting worse. …

The Islamic Affairs Analyst of Gloucester, England, printed an article in August 1994 that said, “Iran is pursuing a parallel policy of surrounding Israel with implacable enemies.” Turkey is moving closer to Iran. To Israel’s north, Iran has deluged Hezbollah in Lebanon with money and weapons. With Hamas in control of Gaza, Tehran could ignite another conflict on Israel’s western and northern borders at any moment. Iran is also opening another front in the West Bank, which crawls with zealots sympathetic to if not in the pay of Iran. And Egypt, since the ouster of President [Hosni] Mubarak, is moving rapidly toward discarding its peace treaty with Israel as it moves into Iran’s camp.

This prophesied reality is much closer than it was before February 10. To gain a much deeper understanding of these urgent prophecies, request your free copy of The King of the South.

Ultimately, it’s not all bad news. These prophecies are leading to a time of permanent peace for Israel—and the rest of the world. The Key of David can show you what that future holds.