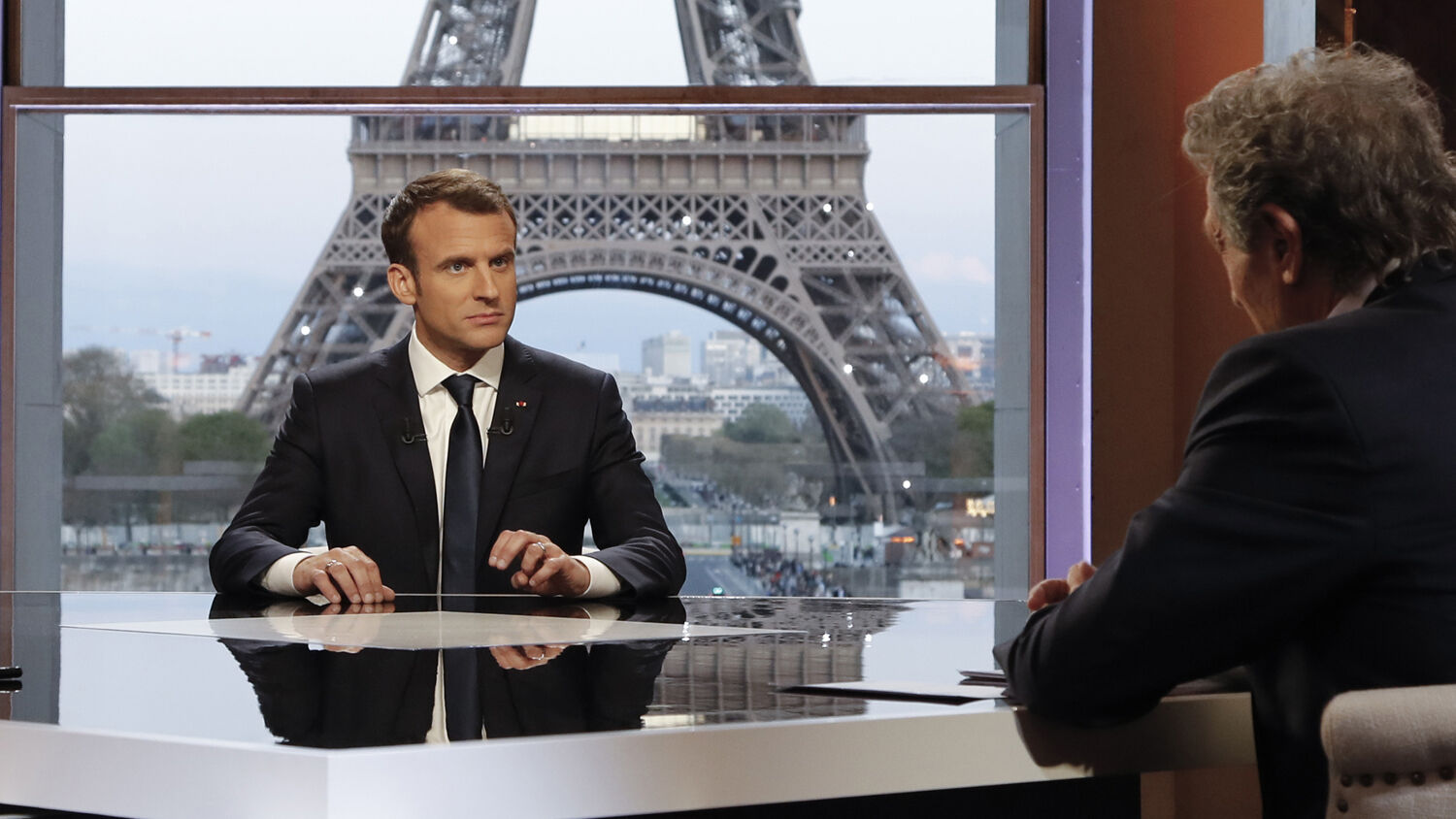 French President Emmanuel Macron prepares for a television interview after the United States, Britain and France decided to launch air strikes on Syria in response to a chemical weapons attack.
FRANCOIS GUILLOT/AFP/Getty Images

Macron’s participation in strikes against Assad might herald a new era of European intervention in Syria.

jerusalem
April 7 may become a defining date in the Syrian civil war. On April 7, 2018, Syrian President Bashar Assad initiated a horrific chemical weapons attack in the rebel-controlled enclave of Douma City on the outskirts of eastern Damascus. The assault involved the use of chlorine gas and a possible nerve agent, killing more than 70 of Assad’s own people and injuring over 500 more.

The events of April 7, 2017, were meant to prevent such a ghastly attack from taking place. That was the day United States President Donald Trump fired 59 Tomahawk cruise missiles from the Eastern Mediterranean and destroyed a largely vacant airfield from where Assad’s planes had taken off just a few days earlier to conduct a sarin gas attack on his own people.

Many thought that Trump’s response (which was overwhelming compared to the previous eight years of the Obama administration’s foreign policy) would deter Assad from using chemical weapons.

A year later, we know that is not the case.

And so, when in response to Assad’s latest attack the U.S. once again limited its strikes to the chemical weapons storage and development facilities, many wonder, Will this deter Assad from using chemical weapons again?

Nevertheless, for one important reason, the response to this April 7 attack may have far-reaching implications for Assad’s hold on power regardless of his future use of chemical weapons.

In the first attack, the U.S. acted independently; this time, it was joined by the United Kingdom and France.

Europe’s inclusion in the attacks against Assad, particularly that of France, may be the watershed event of the past month.

While Europe as a whole has been extremely reticent to enter the Syrian fray for the past seven years of the war, providing only minimal support to anti-Assad forces, the French have been at the forefront, pushing a more aggressive stance.

Indeed five years ago, then French President François Hollande was disillusioned when U.S. President Barack Obama refused to enforce his own red line on Assad’s use of chemical weapons. At the time, Hollande had French jets ready to go and was just waiting for President Obama to take the lead. When Mr. Obama didn’t go ahead with the strike, the French were upset. As reported recently by Foreign Policy, Hollande believed that Obama’s inaction gave Putin the green light to enter Crimea without fearing any U.S. reprisal.

Fast-forward to last summer, just following President Trump’s reprisal attack after Assad’s use of chemical weapons, the new French President Emmanuel Macron followed Hollande’s eagerness for action and made chemical weapons use by Assad his own red line. He underscored his intent by stating, “When you set out red lines, if you are unable to enforce them, then you decide to be weak. Such is not my choice.”

Before the joint reprisal attack, some commentators wondered whether the French might even retaliate against Assad without the leadership of the U.S. Foreign Policy stated,

But even if Macron fails to persuade Trump, a unilateral French strike would still be worthwhile. It would mark a welcome change from Europe’s strategic complacency for the duration of this conflict. …

For the European Union, which is geographically much closer, Syria has been existential. With the flow of refugees reaching European shores and Islamic State radicals striking continental capitals, the Syrian conflict has deeply strained EU institutions. It has revealed the limits of Europe’s security cooperation and border control and the lack of solidarity and political consensus over immigration, exemplified by Hungary’s Viktor Orbán triumphant reelection this week. It has greatly encouraged the rise of anti-European populist movements. And yet, Europeans’ approach, informed by their military limits, has been to wait for Washington.

Macron seems to have understood this is a problem. Now he must do something about it.

And now that Macron has done exactly that, is the door now open for more European action in Syria? Certainly, it looks like the French are willing.

In the aftermath of the attacks, Macron led the public to believe that a conversation he had with the U.S. president convinced Mr. Trump to stay more involved in Syria.

While Macron has tried to downplay the comments, it’s likely there is some truth to his commentary.

As the above quote pointed out, the continuing Syrian civil war has major knock-on effects in Europe. The latest joint action may possibly make Assad think twice about another chemical attack on his people, but it will not stop the more conventional carnage taking place in Syria. It is this larger Syrian conflict, not just the use of chemical weapons, that has sent Syrians and others fleeing into Europe. This is why the French are trying to convince the U.S. to stay engaged, and why its own engagement must increase. With over 6 million Syrian refugees outside their nation, and millions more internally displaced, if Europe is to prevent the influx of more migrants into its borders, then it must work to contain and even end the Syrian civil war.

Already following its strikes, France seems to desire a leading role to engage Russian President Vladimir Putin in dialogue to end the civil war. Considering how vocal Trump has been about seeking an exit strategy from Syria, it wouldn’t be surprising if he were willing to hand over the mantle of Western leadership to France, especially if other nato allies such as Germany become involved.

This past week, Germany’s ever popular former defense minister, Karl-Theodor zu Guttenberg, called out Chancellor Angela Merkel for leaving the “dirty work” to others when it comes to fixing Syria. In an interview with German magazine Bild, Guttenberg said, “I don’t think it creates the necessary awareness in the population that when human rights are trampled on and men are slaughtered it’s time to intervene. Of course, it is easy to say we leave the dirty work to others and draw back to the safe side. But in the long term, one won’t get around it that way” (Trumpet translation).

Guttenberg said that Germany’s reputation could be fixed if it changed its course. “We have a tradition to use beautiful, complicated words to refrain from missions,” he said. “Recall the mission in Libya and others. I believe if Germany, in the next weeks and months, understands clearly how to show that Germany will take part in other future scenarios that are of the same interest, much can be patched.”

It’s unlikely that Guttenberg is alone in expressing this sentiment. While Europe might not have had the stomach for a more robust action in Syria years ago, the fact that the broad majority of the million migrants who entered Germany have failed to assimilate may now motivate a different response.

Whether or not we are witnessing a new era of European involvement in Syria will be determined retrospectively. However, according to biblical prophecy, which guides all of our analysis at the Trumpet, Europe is destined to become a key player in Syria’s future. Already, the geopolitical and social pressure exists in Europe to warrant a greater role in the Middle East. And the longer the civil war goes on without a solution, that pressure will only increase.

This is exactly what we have been predicting since the start of the crisis. In his article “How the Syrian Crisis Will End,” published in September 2012, Trumpet editor in chief Gerald Flurry wrote:

In his article, he discussed an alliance between Europe and a group of Middle Eastern nations. We can see the outlines of that alliance forming already, and the Bible forecasts that Syria will be part of this Europe-aligned bloc. France’s increasing involvement in Syria could help make this happen.

If you would like to read more of our analysis regarding Syria and how it fits into biblical prophecy, please read “How the Syrian Crisis Will End” by Trumpet editor in chief Gerald Flurry.