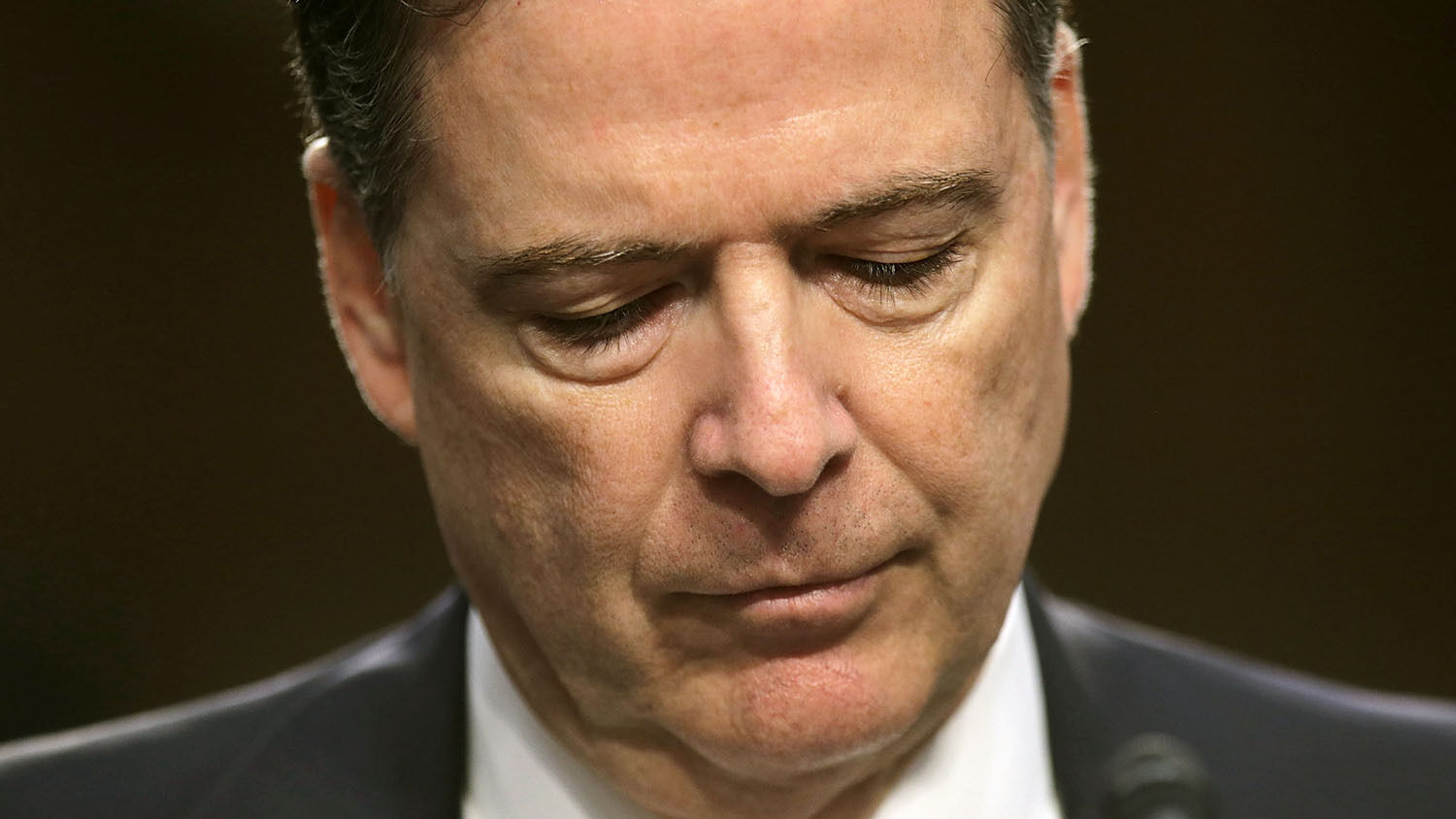 For a man who professes to be a truth-teller, he tells a lot of lies.

This week, the major media were in full hyperventilation mode over former Federal Bureau of Investigation Director James Comey’s new tell-all book, A Higher Loyalty. In the early chapters of the book, Comey emphasizes his personal convictions about telling the truth.

In one anecdote, he tells readers that because of his height (he’s 6’8”), people often presume that he played basketball in college. In his 20s, he let people think that. But later on, he felt bad about the lie and wrote letters to all the friends he had lied to, telling them the truth. This Boy Scout persona continues throughout the book, according to a Guardian review. But this man who portrays himself as a truth-teller has actually been caught in a lie in regard to the Trump scandals. I talked about this on my April 16 radio show, which you can listen to here:

But Comey isn’t the only one caught up in these lies. Across the media and government agencies, people are lying and making up “facts” left and right. In this atmosphere of barely veiled dishonesty, accusations are leveled in all directions, particularly at United States President Donald Trump. Far from attacking him with facts, they have sunk to using lies, half-truths, possibilities and ad hominem attacks to further discredit the president.

He’s a liar. He looks weird. I don’t like his hair. It’s like we just walked into a kindergarten classroom.

Comey had an interview with George Stephanopoulos this week about his highly publicized book release. In the interview, Stephanopoulus asked Comey about the first time he met Donald Trump, in early January 2017:

Stephanopoulos: “It was the first time you met Donald Trump. What was your impression?

Comey: “He had impressively coiffed hair. It looks to be all his. I confess, I stared at it pretty closely and my reaction was, it must take a lot of time in the morning. His tie was too long, as it always is. He looked slightly orange up close with small white half-moons under his eyes, which I assume are from tanning goggles.”

If Stephanopoulos had asked Comey a question about his impression of his idol, former President Barack Obama, Comey probably would have talked about how wonderful he is. But when asked about his first impression of Donald Trump, all he can talk about is his physical attributes.

Even journalists on the left have talked about Comey coming forward in this book to settle scores, taking shots at the president. abc and cbs journalists last week were taken aback by the “petty” and “personal” way in which Comey is “settling scores.”

Comey told Stephanopoulos that he thinks President Trump is “morally unfit to be president. A person … who lies constantly about matters big and small and insists the American people believe it—that person’s not fit to be president of the United States on moral grounds.”

Comey repeated this conviction about truth: “Again, I don’t care what your views are on guns or immigration or taxes; there’s something more important than that that should unite all of us. And that is our president must embody respect and adhere to the values that are at the core of this country, the most important being truth. This president is not able to do that. He is morally unfit to be president.”

Did you catch that? Comey says that the most important value at the core of our country is truth! And yet recent revelations have shown that Comey himself lied about the Trump wiretapping.

In March 2017, President Trump accused Obama’s administration of wiretapping the Trump Tower before his inauguration in January of that year. The vitriolic backlash against the president’s tweets was intense. But revelations in the year since that time have proved that he was right.

American Spectator had a piece titled “How Comey Lied About Spying on Trump Tower” on April 13. This article said (emphasis added throughout):

Jim Comey deserves a special place in the annals of sanctimonious frauds in Washington, D.C. He leaked, lied, bent rules, treated fbi material as his own personal property, violated confidential conversations, and generally acted like a government unto himself. …

To understand the depth of Comey’s leaking and lying, all you have to do is go back and look at his scummy maneuvering in response to Trump’s “wiretap” tweets. Those tweets turned out to be entirely accurate: The Obama administration was intercepting communications at Trump Tower, both during the campaign and the transition. Comey knew perfectly well that Trump was right—fbi agents had been sifting through the Trump Tower records of Carter Page and Paul Manafort—but he sent his team out to lie about Trump’s tweets anyways.

This article refers to an article by the New York Times on March 5, 2017, which covered for Comey’s lies about the fisa court. That article said: “Mr. Comey’s request is a remarkable rebuke of a sitting president, putting the nation’s top law enforcement official in the position of questioning Mr. Trump’s truthfulness. The confrontation … underscores the dangers of what the president and his aides have unleashed by accusing the former president of a conspiracy to undermine Mr. Trump’s young administration.”

American Spectator continued, “So here was an fbi director using the front page of a newspaper to libel a sitting president, all while a fisa warrant based on Hillary’s campaign research, which gave Comey the power to reach into Trump Tower, sat on his desk.”

Comey was the one who approved each of these applications for the fisa court to allow the fbi to spy on Carter Page. Comey was the one who was fully aware of the wiretapping. But when the president called them on the carpet for it in March 2017, Director Comey and everyone else came out and said that it never happened.

Comey even misled Congress about the wiretapping! In a congressional hearing, when he was asked about the Obama administration wiretapping Trump Tower, he gave this response: “I have no information that supports those tweets [by the president], and we have looked carefully inside the fbi. … [T]he answer is the same for the Department of Justice and all its components.”

Comey then explained that President Trump’s accusation that President Obama ordered the wiretapping was impossible: “[N]o individual in the United States can direct electronic surveillance of anyone. It has to go through an application process, ask a judge. The judge can then make the order.”

Right—and it was Obama’s fbi and doj that initiated the application process, relying solely on a specious dossier that was fully funded by Hillary Clinton’s campaign. As my father points out in his article “Saving America From the Radical Left—Temporarily,” they were all in on it! Mr. Obama was one of many involved in spying on Donald Trump. It was a conspiracy that corrupted all levels of the government. And if you go back to March of last year, Comey and company all denied that wiretapping was going on.

James Clapper, the former director of National Intelligence, said on Meet the Press in March 2017, “There was no such wiretap activity mounted against the president-elect at the time, or as a candidate, or against his campaign.” No wiretapping—no fisa court order! He said if the fbi had obtained a fisa court order for surveillance, then he would have known about it! He did know about it. But he lied and said they weren’t spying.

Michael Hayden, the former director of the National Security Agency and Central Intelligence Agency told Bloomberg on March 13, 2017, that there was no wiretapping whatsoever. He was emphatic! He said, “[T]here’s no evidence that that’s happened, because the guys who would have gone to the court, Jim Comey and [James] Clapper, have said, directly and indirectly, they didn’t do that.”

They were all in on it. They have since been caught in a massive lie. And yet the major media still hold them up as honest whistle-blowers who are exposing the “crimes” of President Trump. When Stephanopoulos asked Comey about whether he thought there was any collusion between the Russians and the Trump administration, he said: “I think it’s possible, I don’t know. … It’s possible.”

Here we have clear evidence of spying, wiretapping, collusion, conspiracy at the highest levels of government. And yet all these men and the media want us to talk about is the fact that it’s “possible” that President Trump colluded with Russia.

[T]he president’s enemies in the media and within the government are not limiting themselves to publicizing negative things that are known and provable. They are also fixating on what is implied, alleged or possible—or even proved false.

As far as they are concerned, with President Trump, it doesn’t matter if it’s true or not. All that matters is that it’s “possible”—and that it makes headlines.

Isaiah 3:4-5 show that our leadership in the end time would be childish—childish rulers, childish reasoning, childish behavior. And catastrophe is brewing because of it! When you take the real leaders away and replace them with childish adults, then destruction is just around the corner.

As Joel Hilliker noted, “The Trumpet is neither pro-Trump nor anti-Trump. We offer the spiritual and biblically prophetic view. We explain how events are fulfilling the prophecies of the Bible and leading to the end of this age and the Second Coming of Jesus Christ.”

If you want to learn more about this subject, please read my father’s article “Saving America From the Radical Left—Temporarily.”