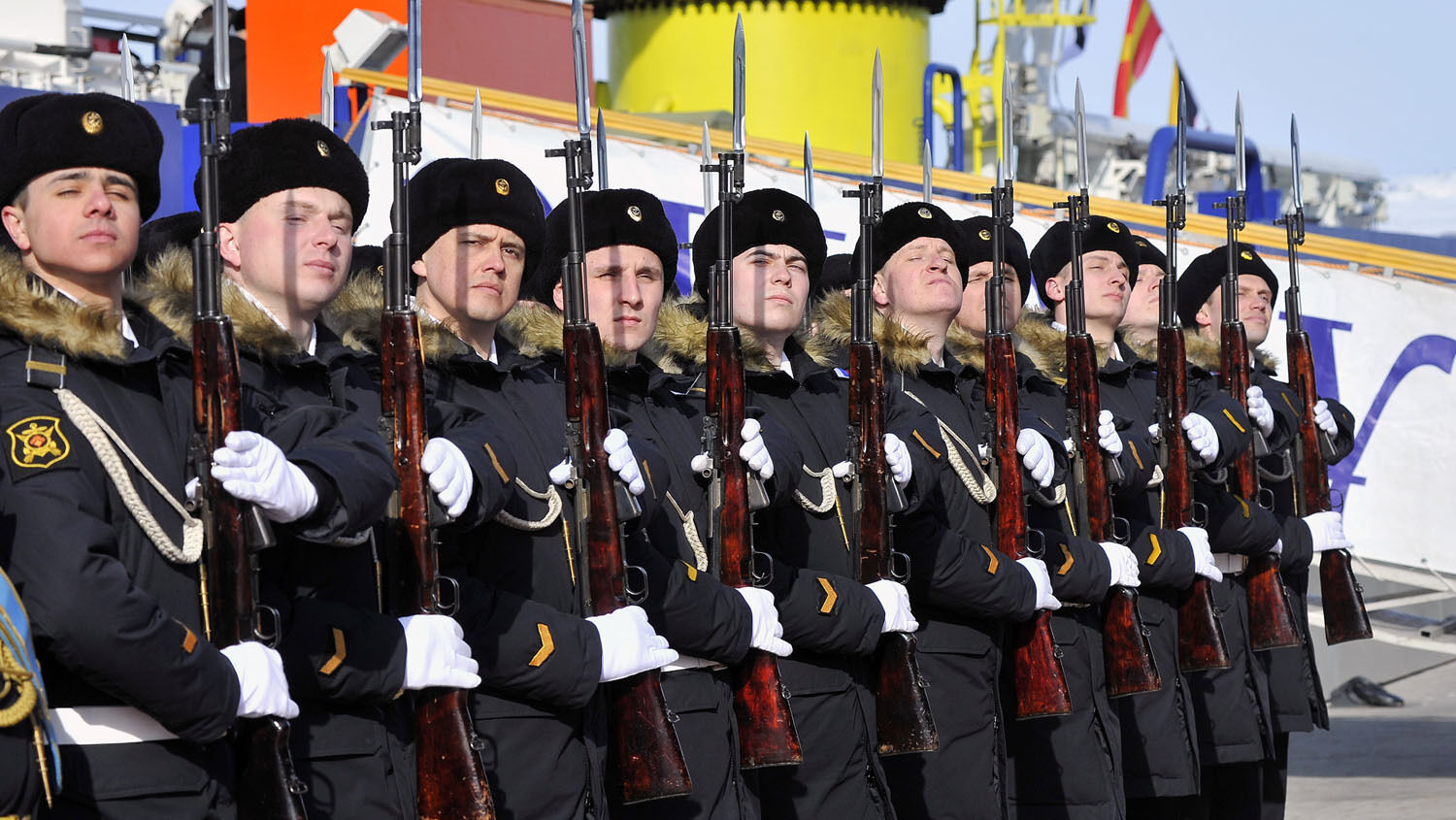 Officers stand at attention during a flag-raising ceremony on the Elbrus, a Project 23120 ice-class logistics ship, at the main base of the Russian Navy’s Northern Fleet, on April 9.
Lev Fedoseyev\TASS via Getty Images

As their aggressive neighbor strengthens its military, how scared should East Europeans be?

Russia held a three-day naval exercise in the Baltic Sea April 4-6, only miles away from the coasts of Poland and Latvia. Three Russian corvettes, a frigate and shipborne helicopters conducted the drills. The drills caused Latvia to shut down part of its commercial airspace.

When the drills were first announced, many said live ammunition would be fired at air and sea targets. Live ammunition was not used—it is possible the Russians experienced equipment malfunctions. Latvian Defense Minister Raimonds Bergmanis told ltv on April 9 that the exercise was probably just intended to test Latvia’s reaction.

Ever since Russia invaded Georgia to support two breakaway regions in 2008—and invaded and annexed Ukraine’s Crimean Peninsula in 2014—East Europeans have trembled at Russia’s military deployments. Just a day before the drills began, United States President Donald Trump met with the heads of state of Latvia, Lithuania and Estonia at the White House. Although the nato security umbrella promises U.S. protection to Eastern Europe, President Trump has said that he expects Europeans to provide more of their own security than they have in the past.

Last week’s exercise was just one of many. And although it did not violate international law, it was conducted closer to Latvia’s coast than ever before. The Latvians are alarmed, but just how scared should they and other East Europeans be? Are they to be Russia’s next victims, following Georgia and Ukraine?

Russia lacks the military power to dominate the Baltic Sea. It only has around 40 ships deployed in the area, and many of them are from the Soviet era. According to German newspaper Die Welt (Trumpet translation throughout):

nato forces of members and partners such as Sweden and Finland are clearly superior to the Russian Navy in the Baltic Sea region. Germany and Denmark together contribute 10 destroyers; Russia’s Baltic Fleet has only two. Ten German and Polish frigates counter one from Russia; nine Danish and Swedish corvettes face six from Russia. When it comes to patrol boats, anti-mine ships and landing craft, nato and its partners clearly have the upper hand—by 15-fold in terms of submarines. Russia’s Baltic Fleet has only one diesel submarine in use.

“But the calming comparison of nato’s and Russia’s fleet quota say little about the risk that is emanating from Moscow,” Die Welt continued. Russia has used much more subtle ways to attack its adversaries.

A significant number of Russian minorities live in the Baltic states. Russia intervened in Ukraine to “protect” large groups of Russian-speakers. The governments of the Baltics see Moscow’s “Russian world” ideology as a threat—they fear a Russian invasion. In addition, Russia could cause trouble in the Baltics, blocking sea routes and the like, to test the nerves of Europe and nato, yet without triggering a war.

Germany has taken the lead in nato missions in the Baltic by establishing a new nato naval headquarters. The headquarters will also be used for non-nato missions in Europe. Europeans know that their individual countries cannot stand up against Russia and other threats, but a united European force would be a major world power.

In a Jan. 23, 1980, letter, the late Herbert W. Armstrong warned that fear of Russia would “be the spark to bring the heads of nations in Europe together with the Vatican to form a ‘United Nations of Europe.’”

While the media is consumed by Russia’s aggression, the Bible gives more warnings about a united European military power. Revelation 13 compares the rising powers in Europe to a ferocious beast, a powerhouse almost unmatched by any other. Europe certainly does not currently fit this description. But Russian military aggression is pressuring the Europeans in this direction. To learn more about this trend, read “Europeans Prepare for Total War” from the April 2018 issue of the Trumpet magazine.