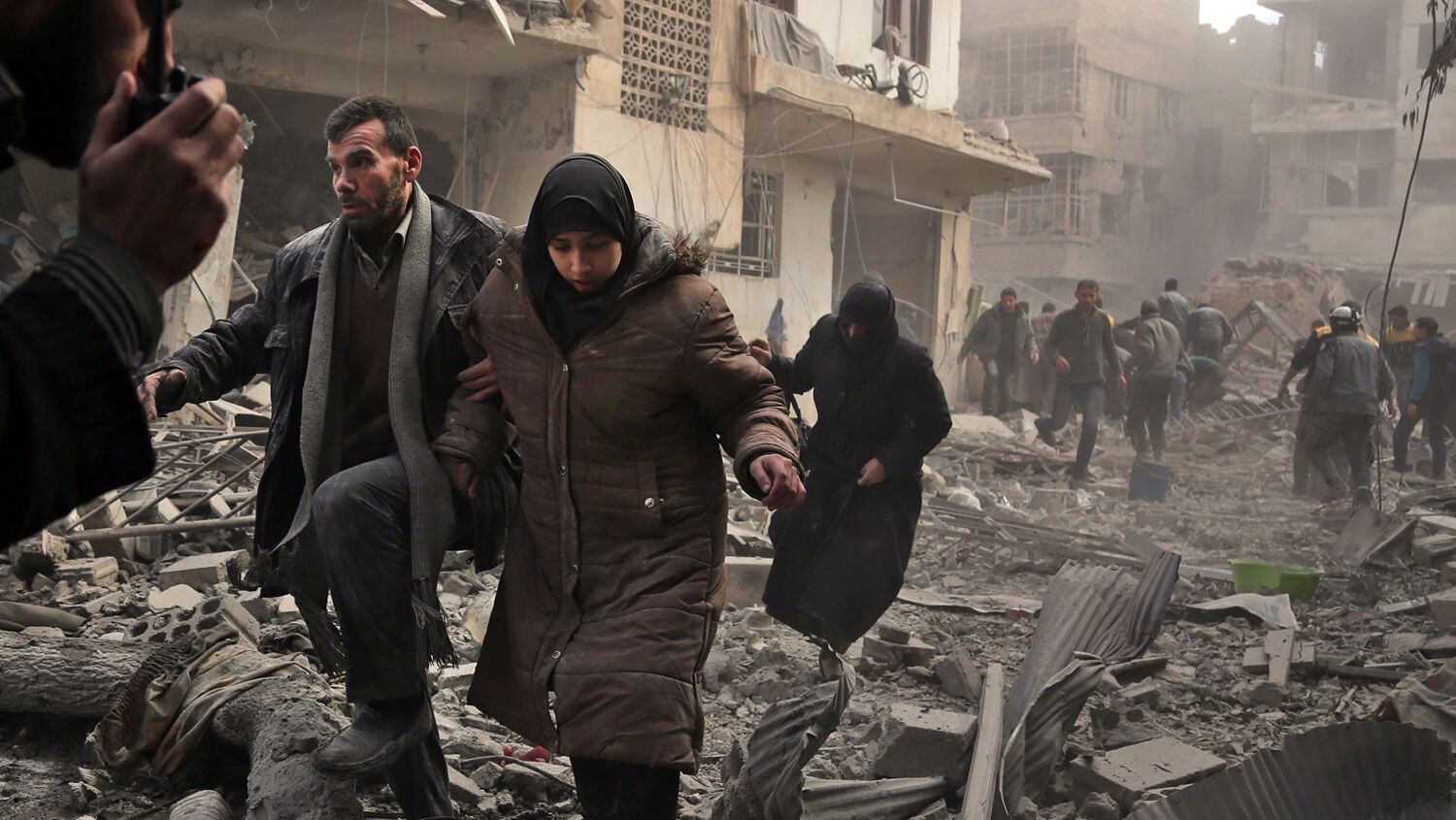 Civilians flee from air strikes on the outskirts of Damascus on February 20.
ABDULMONAM EASSA/AFP/Getty Images

What the Bible says about the ongoing civil war in Syria

The civil war in Syria has “entered a new phase of horror,” according to the United Nations High Commissioner for Human Rights, Zeid Ra’ad al-Hussein. “This month, it is Eastern Ghouta which is … hell on Earth,” Zeid said in his annual report to the UN Human Rights Council on March 7. “[N]ext month or the month after, it will be somewhere else where people face an apocalypse—an apocalypse intended, planned and executed by individuals within the [Syrian] government, apparently with the full backing of some of their foreign supporters.”

Ghouta is only the latest horror story in Syria—following Afrin, Idlib, Raqqa, Deir ez-Zor and Aleppo. It is the last rebel-held enclave near the Syrian capital of Damascus. The regime of Syrian President Bashar Assad, with Russian aerial support, began its offensive in rebel-held Ghouta on February 18. Ostensibly, the offensive was to fight only extremist rebels, not “moderate” ones. A week later, the UN Security Council (unsc) passed a resolution for a 30-day ceasefire across Syria.

So far, more than 800 people have been killed; about 100 of them were killed in one day this week. More than 2,000 have been injured. The nearly 400,000 residents of Ghouta are now trapped with little access to food or medicine. According to the UN, a third of them are children.

“unsc, damn your resolution,” Turkish President Recep Tayyip Erdoğan said at a meeting on March 6. “What is the meaning of a decision that has not been implemented? You are deceiving humanity; you are cheating.”

Erdoğan vowed to continue Turkey’s own offensive in the Afrin region in northwest Syria, which aims to push an estimated 10,000 Kurdish militants out of the area and create a 20-mile-deep security buffer. The Turks have been joined by some anti-Kurdish Syrian rebels who are reportedly exploiting the military operation to settle personal scores with the Kurds. As many as 1,700 Kurdish militants in other parts of Syria may soon abandon the battlefront against the Islamic State and redeploy to defend their fellow Kurds in Afrin. The Kurds have also reportedly invited pro-Assad militants to join the chaos and help fight the invading Turks—an opportunity pro-Assad forces certainly would exploit not only to reassert control over more territory in Syria, but also to further marginalize those same Kurds in the long run.

In addition to the staggering bloodshed in Eastern Ghouta, … escalating violence in the province of Idlib is placing some 2 million people in danger. In Afrin, the offensive by Turkey is also threatening large numbers of civilians. People in government-controlled Damascus are suffering a new escalation of ground-based strikes. And the offensive against extremist groups has resulted in large-scale loss of civilian life.

More than 400,000 people have reportedly been killed in the Syrian conflict, and more than a million injured, many very severely; many are children. Hundreds of thousands of people are living under sieges, the vast majority imposed by government forces and their allies. Over 11 million people have been forced to leave their homes. …

It is urgent to reverse this catastrophic course and to refer Syria to the International Criminal Court.

Resolving the Syrian crisis will not be easy. Right now, at least 10 key players are involved: the UN, the United States, the Assad regime, Russia, Iran, Turkey, the Islamic State, other extremist rebels, “moderate” rebels and Kurdish militants.

While we cannot predict every detail of the “apocalypse” in Syria, we can know the final outcome. It has been written in advance in the inerrant words of Bible prophecy!

“[T]here is something much more significant happening in Syria than just another civil war,” Trumpet editor in chief Gerald Flurry wrote in his September 2012 article “How the Syrian Crisis Will End.” He continued:

World leaders and news commentators cannot tell you in advance where this crisis will lead. But you can know Syria’s future if you read what we have been writing, based on the Bible, for the past 70 years.

That prophecy is found in Psalm 83. It discusses an end-time alliance of nations that clearly includes Syria (“the Hagarenes”) and Turkey (“Edom”) and excludes Iran (the “king of the south” of Daniel 11:40).

[Syria] is an important part of the balance of power in the Middle East, and Psalm 83 prophesies that there is about to be a dramatic, violent shift in Syria’s alliances. …

Right now, Bashar Assad’s Syria is closely allied with Iran—but this prophecy shows that these two nations are about to split. This will have a domino effect on other nations. These events will really shake this world and dramatically alter the course of history! …

Edom, or Esau, is Turkey. Turkey has also been allied with Iran, but it too is going to side [against Iran] in the future! Why? Because it disagrees with what Iran is doing in Syria! While Iran supports the Assad regime, Turkey supports the rebels.

This is why the ongoing civil war in Syria should warrant more of your attention. Just as it is important to be aware of the “apocalyptic” horrors of the Syrian war and the plight of civilians in Syria, it is critical to understand how the interactions between the different powers in this crisis are fulfilling Bible prophecy.

Mr. Flurry concluded his article by writing, “Just watch—keep track of this. See if these exact events don’t happen. … [M]ake sure you watch Syria, and make sure you watch Bible prophecy!” His article “How the Syrian Crisis Will End” and his free booklet The King of the South can give you a good head start.