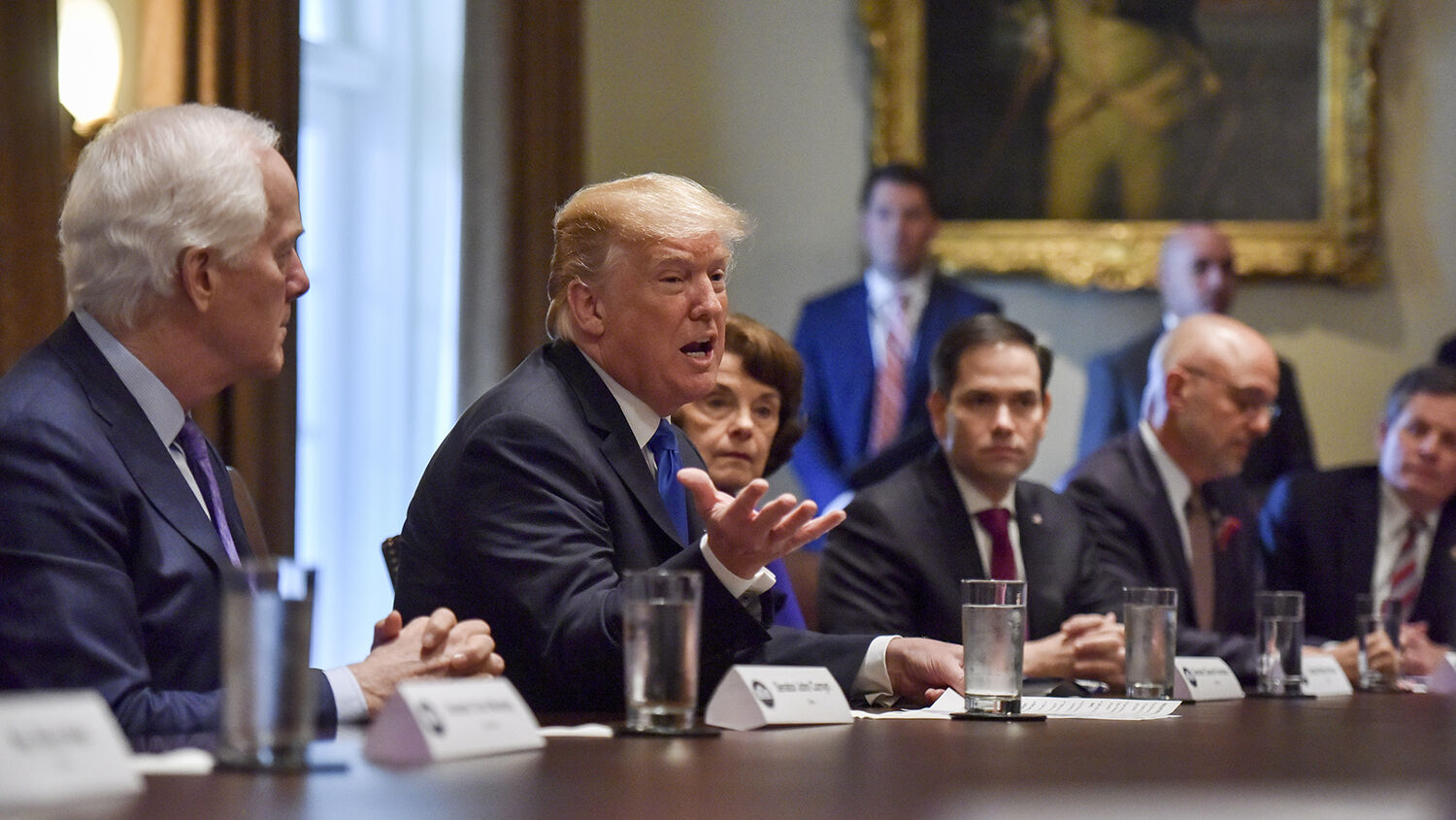 President Donald Trump meets with bipartisan members of Congress to discuss gun control and school and community safety in the Cabinet Room of the White House on February 28, in Washington, D.C.
Jahi Chikwendiu/The Washington Post/Getty Images

‘It must be of the spirit if we are to save the flesh.’ –Gen. Douglas MacArthur

Calls for stricter gun control have intensified since a school shooter murdered 17 people in Parkland, Florida, on February 14. Now, United States President Donald Trump has stunned congressional lawmakers by embracing gun-control measures that are opposed by the National Rifle Association (nra) and the majority of the Republican Party.

During a televised meeting with lawmakers on gun violence, President Trump called for comprehensive gun-control legislation that would alter school security, expand background checks, and restrict gun sales to young adults and the mentally ill. At one point, President Trump even suggested seizing guns from mentally ill people without going to court first. “I like taking the guns early, like in this crazy man’s case that just took place in Florida …. [T]o go to court would have taken a long time,” he said. “Take the guns first, go through due process second.”

Republican lawmakers are unlikely to support such a measure. Keeping guns away from the mentally ill seems like a worthy goal, but granting the government even more powers is a slippery slope, as is defining mental illness. Circumventing due process is dangerous and has far-reaching ramifications.

“That statement will really animate the gun owners of the country and the nra against him, because this is exactly what they fear most: confiscation first, trial later,” said Judge Andrew Napolitano in a Fox News interview.

According to the Substance Abuse and Mental Health Services Administration, part of the federal Department of Health and Human Services, nearly 1 in 5 Americans suffers from “mental illness” each year. The administration’s definition of “mental illness” includes everything from depression to schizophrenia. Many mental illnesses cannot be diagnosed physically—instead, a psychologist makes a diagnosis based on his or her opinion of a person’s behavior.

Allowing the government to disarm such individuals based on the opinions of psychologists opens the door to the government disarming many others for a variety of reasons.

While much public discussion about mass shootings focuses on gun control, this ignores the fact that the United States has been a nation of gun owners ever since the first colonists arrived from Europe more than 400 years ago. Just 30 years ago, teenagers commonly rode the bus carrying guns to their high school rifle ranges. And the rate of mass shooting was lower then. In fact, according to researchers from Harvard University, the number of mass shootings has tripled since 2011.

The reason mass shootings have increased so dramatically is not because the federal government does not have enough laws, money or agents, but because the moral fiber of individual Americans is unraveling. Most mass murderers are young men from broken families who had no strong father figure to teach them to deal with their emotions and direct their energies toward productive pursuits. This lack leads to mental health problems that cannot be diagnosed physically because they affect the human spirit.

With more than 300 million firearms already in circulation throughout the U.S., and with people now able to manufacture their own firearms at home, keeping weapons out of the hands of those with mental and spiritual problems is ultimately impossible. Even if such gun control could be enforced with massive and forceful government action—and without numerous violent confrontations—it would change the nation’s fundamental freedoms and its understanding of God-given rights and individual liberty. It would ultimately make the nation more susceptible to a dictatorial government.

In many ways, the gun-control debate within the U.S. is a microcosm of the disarmament debate between nations. Giving up firearms only works if everyone does. If criminals or government officials remain armed, the likelihood is that they will oppress the unarmed.

“Men since the beginning of time have sought peace,” said Gen. Douglas MacArthur at the end of World War ii. “Various methods through the ages have attempted to devise an international process to prevent or settle disputes between nations …. Military alliances, balances of power, leagues of nations, all in turn failed, leaving the only path to be by way of the crucible of war. … We have had our last chance. If we do not now devise some greater and more equitable system, Armageddon will be at our door. The problem basically is theological and involves a spiritual recrudescence and improvement of human character that will synchronize with our almost matchless advances in science, art, literature and all material and cultural developments of the past 2,000 years. It must be of the spirit if we are to save the flesh.”

Nuclear weapons, rifles and knives will pose mortal threats to human beings until “a spiritual recrudesce and improvement of the human character” synchronizes “with our almost matchless advances in science.” The Second Amendment of the U.S. Constitution acknowledges an individual’s right to defend himself and to rule himself through elected representatives. But it is an imperfect law in an imperfect society full of human nature. Mankind must learn the hard way that its military alliances, balances of powers, and weapons-control policies are ineffective not because they are not comprehensive enough but because “the carnal mind is enmity against God” (Romans 8:7). We won’t be able to beat our swords into plowshares until the Earth is “filled with the knowledge of the glory of the Lord, as the waters cover the sea” (Habakkuk 2:14). Fortunately this day is coming soon!

For more information on why seemingly innocent gun-control policies pose a danger to the United States, read America Under Attack, by Trumpet editor in chief Gerald Flurry. And for more information on policies that can and will change the world for the better, read The Wonderful World Tomorrow—What It Will Be Like, by Herbert W. Armstrong.