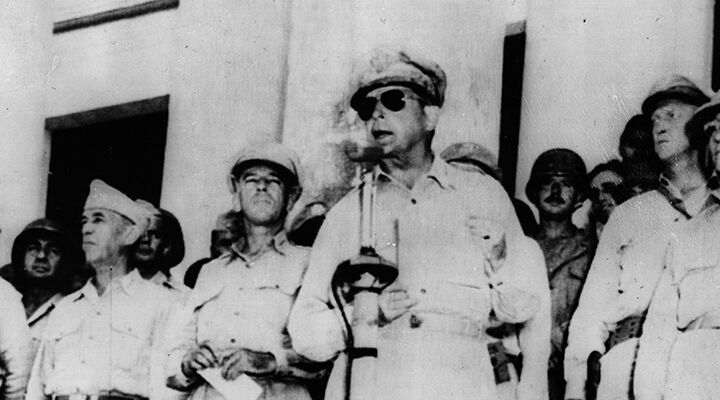 After the Japanese surrender in Tokyo Bay on board the USS Missouri, World War II had ended. General Douglas MacArthur, one of the most respected statesmen and military leaders of our time, was there to sign the document. It ended the worst war ever experienced on this earth. But there was something horrendously different about the end of this war. A new atomic age had been introduced. Atomic bombs had been dropped on Nagasaki and Hiroshima. Man’s number one problem now became that of human survival. Scientists said that this bomb would completely revolutionize both peace-time and warfare upon this planet. We had entered into the atomic and nuclear age with horrifying new weapons. The magnitude of their destructive power defied the imagination.

After signing the Japanese surrender, General MacArthur wanted to speak to America and the world about peace, but with a strong warning. He said (emphasis mine): “Men since the beginning of time have sought peace…military alliances, balances of powers, leagues of nations, all in turn failed, leaving the only path to be by way of the crucible of war. The utter destructiveness of war now blots out this alternative. We have had our last chance. If we will not devise some greater and equitable system, our Armageddon will be at our door. The problem basically is theological and involves a spiritual recrudescence, an improvement of human character that will synchronize with our almost matchless advances in science, art, literature and all material and cultural developments of the past two thousand years. It must be of the spirit if we are to save the flesh.”

He was stating that human survival depended on human character! Today we can’t seem to decide if character is even that important. But it is, because God says so.

As General MacArthur said, our problem is “theological,” or spiritual. That is the only way we can save humanity alive! It all depends on our getting to know and obey God.

Our only hope is building human character—changing man’s evil nature into God’s righteous character (Matt. 5:48). Even most religious people fail to do that. They too are a part of the problem (Rev. 12:9).

Herbert W. Armstrong spoke on his radio program, The World Tomorrow, at the end of World War II about the problem of human survival. “Before the end of the war in Europe we heard a lot of talk about this being the last war. At San Francisco, I heard the United Nations conference warned time and time again by speakers for different nations that the United Nations Organization there being drawn up was the world’s only and last hope of peace. A little later we began to hear the top generals, admirals, statesmen and news commentators speaking about ‘if’ there is another war. But now it is no longer ‘if‘—but those same men, in position to know, speak today only of ‘when,’ and ‘how.’

“We might as well face the stark, ugly, horrifying truth, my friends—the world leaders know within themselves that there is no hope, so far as human effort and international agreement or organization is concerned, of preventing another war—and all know now that even this greatest of all wars will have been but child’s play by comparison. We have engines of destruction now which can annihilate humanity from this earth—stamp out all human life! Too horrible to contemplate? Well, we must contemplate it! We must face it, for we are the generation destined to live into and through it! So, where are we headed? How can such an unthinkable catastrophe be prevented? Certainly not by dodging it, or playing the ostrich!

“Let’s look once again, then, to the real causes of war! Are you willing to hear the truth? Do you want to know how war can be abolished—permanently—and how we can achieve a real, and a lasting peace…?

“You can’t cure any sickness without finding the cause and removing that. Let’s dare to boldly look, then, to the real cause.

“It has to do with the system that grips this world, holding it, in the modern complex structure of this machine age, bound so tightly we are unable to free ourselves. To really have a clear understanding, we’ll need to stand off from this entire world for a while, in our minds—and view this world as a whole—to take a quick bird’s-eye view of the world from its beginning up to now. There is a plan being worked out here below, and a higher power, above, is doing that working out” (Nov. 4, 1945, broadcast, “The Threat to World Peace in the Atomic Age”).

We have enough nuclear power today to destroy humanity many times over. It’s just as Christ said it would be. “For then shall be great tribulation, such as was not since the beginning of the world to this time, no, nor ever shall be. And except those days should be shortened, there should no flesh be saved [alive—Moffatt translation]: but for the elect’s sake those days shall be shortened” (Matt. 24:21-22). How can we not listen to our Creator’s amazingly accurate prophecies in these terrifying times?

General MacArthur was right—“we have had our last chance”! And we have refused to deal with the cause. The indescribable nightmare is about to explode!

Whether we listen or not, God’s purpose is being worked out. Those who heed God’s word are promised protection from a nuclear holocaust.

Will that include you?