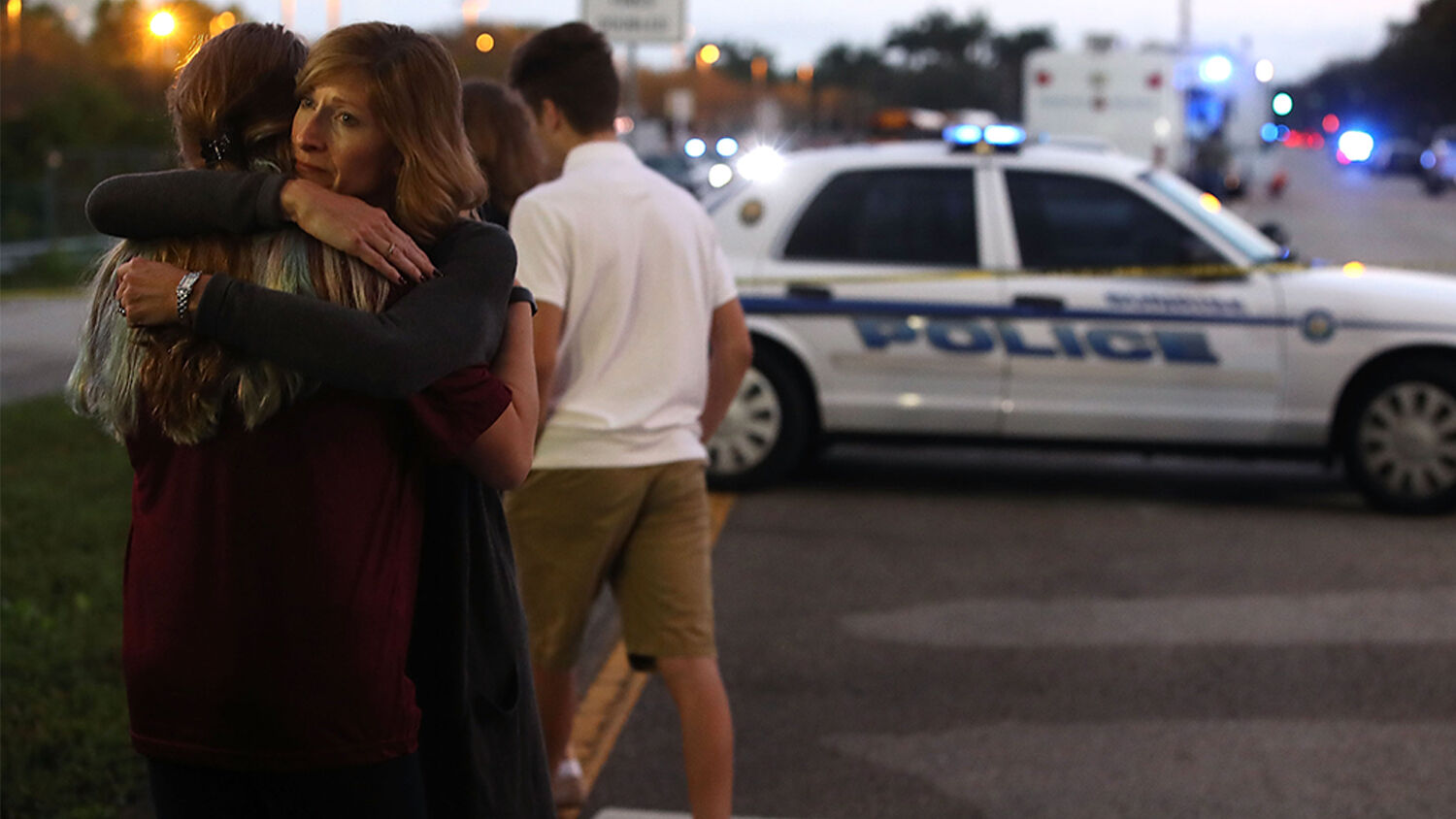 A police check point near the Marjory Stoneman Douglas High School, where 17 people were killed by a gunman on February 14 in Parkland, Florida.
Getty Images

There is a reason for such horrific violence: America has turned away from God’s laws governing family life and private morality.

A 19-year-old opened fire with a semiautomatic rifle at a Florida high school on Wednesday, murdering 17 people and wounding 14 others. The shooter, Nikolas Cruz, had been expelled from Marjory Stoneman Douglas High School in Parkland for unspecified disciplinary reasons and was attending classes elsewhere. He took an Uber to his old school campus, pulled a fire alarm, waited for people to pour into the halls, and started shooting.

Cruz then hid among the crowd fleeing the massacre he caused. Local authorities later arrested him in nearby Coral Springs, charging him with 17 counts of premeditated murder. The Parkland shooting is the ninth-deadliest mass shooting in United States history since reliable records began in 1949.

Authorities are still trying to work out the motive, but a Mississippi bail bondsman alerted the U.S. Federal Bureau of Investigation last September to one of Cruz’s YouTube comments: “I’m going to be a professional school shooter.” Other social media posts include pictures of guns, knives and masks. He also posted a threat to copy the notorious 1966 University of Texas clock tower sniper attack.

Former classmates said Cruz was a “loner.” His adopted father died when he was 6 years old, and his adopted mother died of pneumonia last November. Like so many mass shooters, Cruz was a disturbed child from a fatherless home who developed a fascination with violence.

The Director of the National Marriage Project at the University of Virginia, Brad Wilcox, pointed out in 2013 that nearly every U.S. school shooting that year involved a young male whose parents either divorced or never married in the first place. “[A]s the nation seeks to make sense of these senseless shootings, we must also face the uncomfortable truth that turmoil at home all too often accounts for the turmoil we end up seeing spill onto our streets and schools,” he wrote in his article “Sons of Divorce, School Shooters.” “The social scientific evidence about the connection between violence and broken homes could not be clearer.”

Mass shootings are becoming more common across America. The Parkland shooting was the 41st mass shooting of 2018, according to Mass Shooting Tracker, a crowd-sourced website that defines a “mass shooting” as an incident of gun violence in which four or more people are shot (but not necessarily killed). This number equates to almost one mass shooting per day so far this year. The website’s data shows that the number of mass shooting victims has increased dramatically over the last four years. In 2013, 1,643 were shot in mass shootings; in 2017, the total was 2,571. During this period, the annual number of mass shooting incidents rose from 339 to 427.

The reason mass shootings have increased so dramatically is because the moral fiber of American families is ripping apart.

Former U.S. Secretary of Education William J. Bennett points out in his book The Index of Leading Cultural Indicators that a survey of U.S. schoolteachers in 1940 revealed that the top problems in America’s public school system were talking out of turn, chewing bubble gum, running in the hallways, cutting in line, and littering. By 1990, the top problems included drug abuse, teenage pregnancy, suicide, rape, robbery and assault. These problems have only worsened during the 27 years since.

Something is seriously wrong with American society. Broken families across the nation are producing killers and criminals at a record rate. The per capita rate of violent crime has doubled since 1960. A murder, rape, robbery or aggravated assault is committed every 26 seconds in America today.

There is a reason for such horrific violence: America has turned away from God’s laws governing family life and private morality. In the Bible, God warns that such rebellion produces horrific murders and bloody crimes.

There has indeed been a chain of bloody crimes in America. The nation cannot go a single minute without Americans committing and suffering two violent crimes. It can hardly get through a single day without suffering another mass shooting.

The eternal, unchanging moral laws revealed in the Holy Bible bring great peace, happiness and true freedom when obeyed. It is because society rejects, ignores and mocks these laws that mass shootings and other bloody crimes continue and worsen.

To learn more about the importance of a father’s role in society, request our free booklet Conspiracy Against Fatherhood, by Trumpet editor in chief Gerald Flurry.