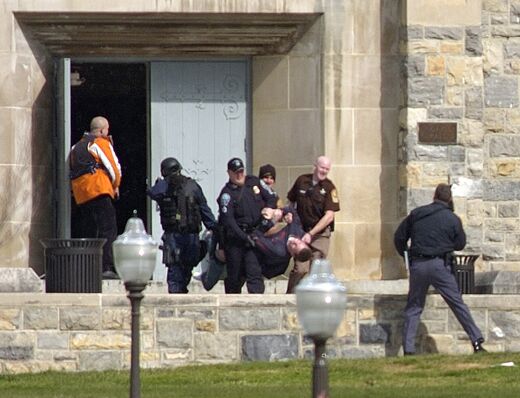 Carnage at Virginia Tech has resurrected the sickening specter of youth violence. Why do such tragedies occur?

This question screams out whenever a tragedy occurs such as the one April 16 at Virginia Polytechnic Institute and State University in Blacksburg, Va. In this, the deadliest school shooting in American history, at least 33 people died, including the gunman, who has been described as a young Asian man.

In the wake of past school shootings, the question why has everyone searching for answers, anything that may provide clues as to what would motivate young people to do something so perversely violent.

Many aspects of our sick society supply those clues: violence in movies, television and music, hyper-realistic first-person shooter video games, pervasive hateful content on the Internet that can suck in young minds, cruelty in youth culture that leaves some young people outcast. The list goes on. Every mental-health worker in the nation has a theory, and a solution intended to prevent such attacks in the future.

But here we are again.

It’s time we turn to God to see why these problems persist and what are the real solutions.

In Isaiah 30:8, God tells us that Isaiah recorded his book for a “time to come”—that means now—the days we are living in immediately prior to the return of Jesus Christ to this Earth.

In Isaiah 1:3, God says even the ox knows its owner, but the Israelites—God’s own people—do not. They have forgotten so many things which used to be so evident and understood by all. Above all, they have forgotten their Creator, God says.

Now turn to Isaiah 3 and see how fitting this description is of America today. In verses 2 and 3, God says that in the end time, He would take away the strong men of war, prudent judges, God-fearing ministers, practical counselors, skilled workers, eloquent speakers and the older, wiser generation. In other words, God has removed the real leadership from America.

If that has been removed, we should ask, what has replaced the leadership vacuum? Verse 4 says, “I will give children to be their princes, and babes shall rule over them.” That means two things, really. First, leaders today (as the older, wiser generation dies off) are behaving more like children than adults. Secondly, it means society itself is dominated by a rebellious adolescent spirit.

Because of this, Isaiah says, “people will oppress one another, every man his fellow and every man his neighbor …” (verse 5, Revised Standard Version).

The verse concludes, “The child shall behave himself proudly against the ancient, and the base against the honorable.”

That’s the question everyone asks after a tragedy like Virginia Tech. The answer is that the quality leaders of verses 2 and 3 have been taken away! If we are ever to solve the problems plaguing the younger generation, we must first consider what is wrong with the older one! God says in verse 12, “They which lead you cause you to err, and destroy the way of your paths.”

To the adult generation of today, God thunders, “As for my people, children are their oppressors, and women rule over them.” It all gets back to family. Everything is backwards. It’s been that way for more than two generations. And we are finally beginning to reap what we began to sow 30 or 40 years ago. Of course, this reasoning is far too simplistic for the intellectual elite of this day—but it is, nevertheless, true. No amount of guidance counseling will turn it around unless they are willing to tackle the real issue—the destruction within the family.

Now for the solution. At this point, we could write a lot about how different it will be when Christ returns—how He will restore government and peace within the family. How He will put an end to fornication, adultery and divorce. How He will turn the family right-side up, with the father reassuming his role as loving head and provider; the wife as a submissive helpmeet for her husband; and their children, obediently following in the steps of their parents. But for the benefit of those who are downright hostile to that instruction, let’s turn to a bit of history that most Americans should be familiar with.

George Washington was America’s first president and, next to Abraham Lincoln, perhaps the finest we’ve ever had. Though much younger than many of the other Founding Fathers, he quickly became the one the others looked to for outstanding character and leadership.

It’s been said that when George Washington’s mother was asked how she raised such a remarkable son, she replied, “I taught him to obey.” George’s father was said to have told his son, “It is not sufficient just to obey, you must learn to obey cheerfully.”

From the earliest age, George was taught to accept responsibility for his actions. He was taught to always wait patiently while his elders conducted their affairs. He learned to be quiet when elders were talking. He learned that dad was the head of the house and that his decision was final. For George, there were definite penalties for inappropriate action—most notably, spanking.

In The Making of George Washington, William Wilbur wrote, “It is worth noting that there were no negative influences in the home, no relatives who lived with the family who might modify or dilute the thoughts and principles which August [George’s father] gave his children every day.”

George grew up in a solid family. August was a father who understood that he and his wife were most responsible for the future growth and development of their son.

“Perhaps the most important factor of this fine home,” Wilbur notes, “was Mary’s cheerful acceptance of her husband’s leadership. The reason for this happy situation can be found in the teaching and philosophy of the church and society of that era.”

He goes on to quote Ephesians 5 and 1 Peter 3, which outline the God-ordained roles in the family.

Concerning George’s mom, Wilbur writes, “Not only did she do her part to create a happy home, she also made it possible for George to develop complete faith in his father.”

You see, when she said she taught her son to obey, it wasn’t just by command. It was by example. Mary was brought up to be obedient too. George learned obedience from his parents by what they taught—and by their example. Because of that obedience instilled in George from an early age—and because of how serious his parents viewed their responsibility to teach their children—George’s path toward greatness was a short one. He learned at an accelerated rate.

“It is difficult to overestimate the value of this gift of complete trust,” Wilbur wrote. “Because of it the boy accepted and absorbed a large store of his father’s wisdom. Equally important, as a result of the fact that George accepted everything his father said without question, the knowledge he acquired was absorbed at a fraction of the time which would have been required under other conditions. As a consequence, George matured more rapidly than the average child.”

As a man, George Washington was physically strong, a fearless military man—one of our nation’s best generals. He feared God, worked hard, gave moving speeches and was wise well beyond his years.

But how did that happen? Why did he end up so great? A great many biographies have been written which, no doubt, cover many contributing factors. It would be impossible to list them all. We have tried to give just a brief synopsis of what his upbringing was like to make a point.

In the same manner, it is impossible to cover all contributing factors which explain why a young man would walk into a university building and start shooting people dead in cold blood. What caused that? Poor grades? Being an outcast? Video games? Violence on television? Divorce? Music lyrics? Neo-Nazi literature?

All of those may be contributing factors. But none gets right to the heart of the matter, which is this: The great George Washington could not possibly have been produced in a troubled home atmosphere rife with dissension, hatred, bickering and rebellion. And neither could a young killer have been produced in the loving, peaceful, obedient home atmosphere young George was raised in.

“I taught him to obey.” That’s Mary Washington’s view of why her son became so great. That, like much of what the Washingtons taught their son, was a Bible-based principle.

One of the wisest men who ever lived, Solomon, wrote that of “many books there is no end” (Ecclesiastes 12:12). Living in the Information Age, there is no shortage of knowledge—of experts who claim to have answers, like if we only had a few more guidance counselors in schools all the mindless acts of school violence would end. What ignorance!

God says we have all kinds of knowledge available, but we have forgotten Him and thereby rejected the most important knowledge of all.

Think about this: What good is it to teach the oncoming generation all there is to know about this Information Age if we never teach them to obey?

If obedience, more than any other factor, is what Mary attributed to George’s success, it is safe to say that disobedience, above all, is what leads to these senseless acts of violence. A young person who goes on a shooting spree was never taught to obey—at least not in the way George was—in a loving, yet firm way.

George Washingtons don’t just happen any more than young killers do. They are made, above all, by the parents. God says so.

So if we are looking for real solutions to school shootings, look beyond the teens—beyond the young people who commit these acts. They are only the effect. The cause gets back to how we have trained them.

Four decades ago, the United States was sucked into a destructive, costly and unpopular war. We are not referring to Vietnam, but the cultural revolution. It was waged by an American minority—mostly young people. The fundamental premise of their revolt was simply rebellion—rebellion against traditional standards, against high morals, against virtually any form of authority—especially parents. Back then, this rebellious minority was called a counter-culture because it wasn’t necessarily mainstream. It was actually quite shocking to the mainstream. That’s not to say that prior to the 1960s there were no rebellious children. But it certainly had never been as organized and widespread as it was then. The older generation in the ’60s had never seen anything quite like it.

Since that time, this rebellious spirit has spread like cancer. Youthful rebels did not go away when the ’60s ended. They became administrators, professors, politicians—and parents.

What started as a rebellion from the bottom is now taught from the top. What once was shocking now seems innocent. And above all, what once was counter-culture is now popular culture.

Yes, the rebellious youth culture has won the cultural revolution. And now, making matters worse, the “innocent” rebels of yesteryear have raised up a generation that now oppresses us.

Do people realize just how much teenagers have taken over?

Our children have become our oppressors. In its extreme, this oppressiveness manifests itself in places like Virginia Tech.

And when it rears its ugly head in a tragedy as despicable as this, psychologists, counselors, ministers, even parents, would have us believe that those things “just happen”—if only there were a few more counselors around to help young people find their inner selves.

Our younger generation is the way it is because of the sins of the older generation. This society is what we have made it to be.