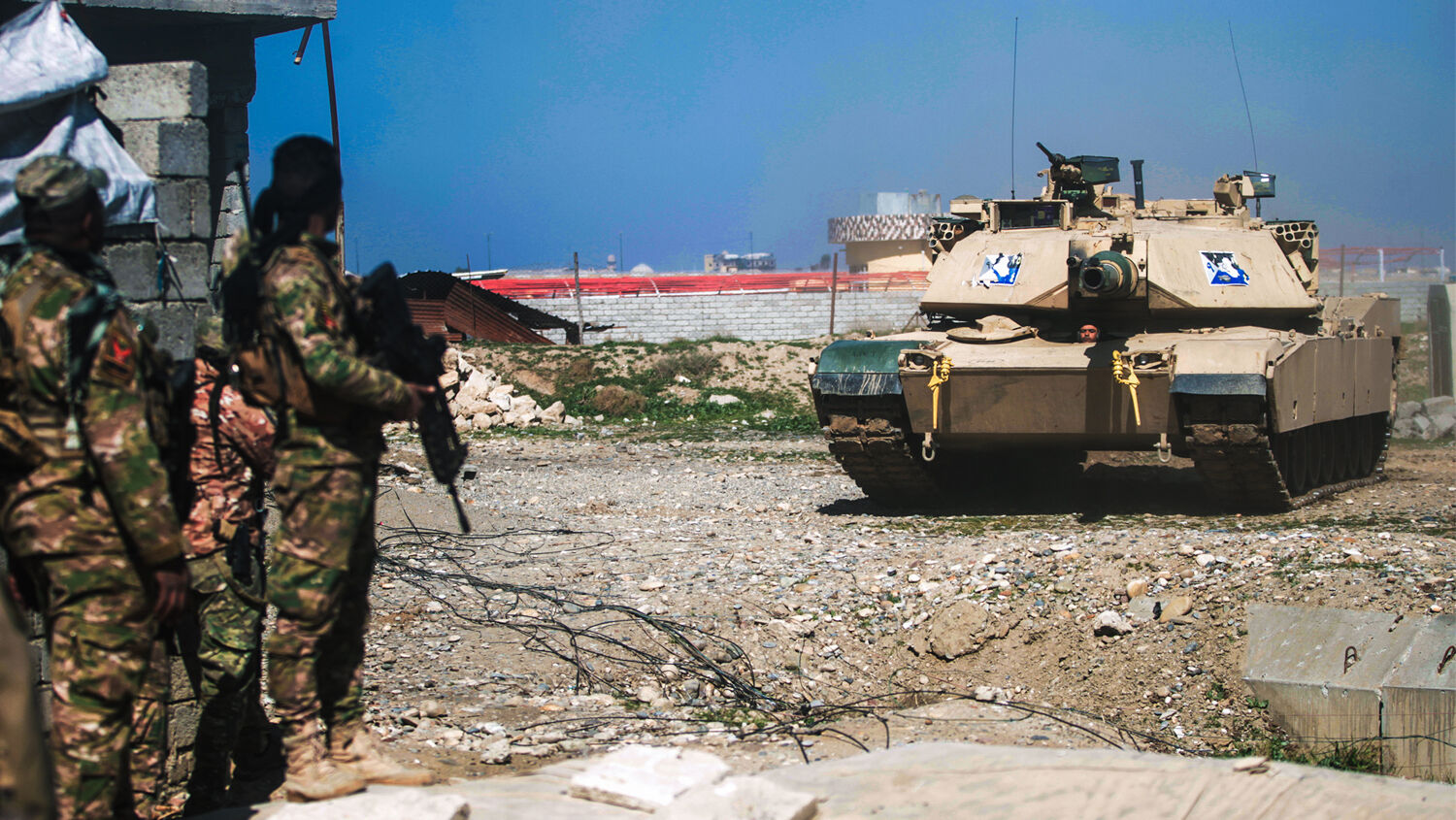 An Iraqi M1 Abrams tank advances toward the Dindan neighborhood in the western half of the northern city of Mosul, during the offensive to retake the area from Islamic State fighters on Feb. 25, 2017.
AHMAD AL-RUBAYE/AFP/Getty Images

America is spending its strength in vain, and spending it to empower its archenemy.

Iranian soldiers are driving around in American tanks, according to a recent government audit.

In the February 2 report from the United States Department of Defense Office of Inspector General, the State Department “acknowledged that some U.S.-provided military equipment sent to support the mission, including as many as nine M1 Abrams tanks, had fallen into the hands of Iranian-backed militias that fought against [the Islamic State] in Iraq.”

Since the multinational war effort against the Islamic State began in 2014, the U.S. has given at least 1,000 armored personnel carriers, 250 tanks and $3.8 billion to the Iraqi military to help it reclaim parts of Iraq from Islamic State militants. America’s archenemy in the Middle East, Iran, supplied that same Iraqi Army with more than 100,000 troops in what are known as Popular Mobilization Units (pmu). These units are primarily Shiite Iraqis, but they also include soldiers from Iran’s Islamic Revolutionary Guard Corps. Many pmu forces have officially integrated into the Iraqi military.

Iraq’s al-Ghad news agency reported that since December, the Abrams manufacturer, General Dynamics, has ceased providing maintenance support for the tanks in Iraq because of its concerns about how the equipment is being shared with some of America’s deadliest enemies in blatant contravention of their usage agreement.

Authorities are understandably concerned about what will happen when the U.S. withdraws its 5,200 troops from Iraq in partial exchange for $1.3 billion to train and arm the Iraqi Army. America cannot withdraw without training and arming Iraqis. And it evidently cannot train and arm Iraqis without arming and empowering Iranian militants.

Small Arms Survey researcher Matt Schroeder told al-Monitor: “Is there any sensitive technology that could be reverse engineered, picked apart and then used by the Iranian military to attack U.S. armor? That may be the bigger concern than militias driving around in tanks.”

Consider the RQ-170 Sentinel. Iran captured the $6 million American spy drone in 2011 and warned that it would “target all U.S. military bases around the world.” Iran’s response would be “terrifying,” said deputy head of the Iranian parliament’s Foreign Affairs and National Security Committee, Mohammad Kossari. Five years later, Iran unveiled what it claimed to be its own version of the RQ-170 Sentinel, with reported capabilities of “hitting four targets with smart precision-guided bombs with high accuracy.”

The Trumpet often reports on American strength being spent in vain. It’s a direct fulfillment of a biblical prophecy in Leviticus 26:20. We have witnessed America not only spending its strength in vain but actually empowering its enemies. In his January 2017 article “America’s Greatest Defeat—Iran’s Victory,” Trumpet editor in chief Gerald Flurry wrote:

We must look at what is happening here in the context of the prophecies of the Bible. That shows where events are leading and why. Those prophecies describe a lot of good news for America’s future. But that good news is preceded by very alarming news—terrible punishment coming on the U.S.

But certain aspects of the Iraq campaign actually show American weakness. And though the current U.S. administration [of George W. Bush] is vowing not to allow an Iranian-style theocracy to gain hold in Iraq, there are also signs in the way it is rebuilding the country that show a fundamental lack of political will to see this pledge through. Perhaps it will not be during the term of the current president, but the Bible shows that America will fail to contain Iran the way it hopes to.

Already, it is clear that Iran is eyeing the situation for opportunities. It would like nothing more than to extend its influence over the majority Shiite population in Iraq, and assume control over its massive oil wealth.

Iran, we could add, is also extending its influence in Iraq to assume control over American-supplied Abrams tanks and other military hardware.

If you’d like to understand the critical significance of these developments, you need to read “America’s Greatest Defeat—Iran’s Victory” and “Is Iraq About to Fall to Iran?” Also, request a free copy of Mr. Flurry’s booklet The King of the South.