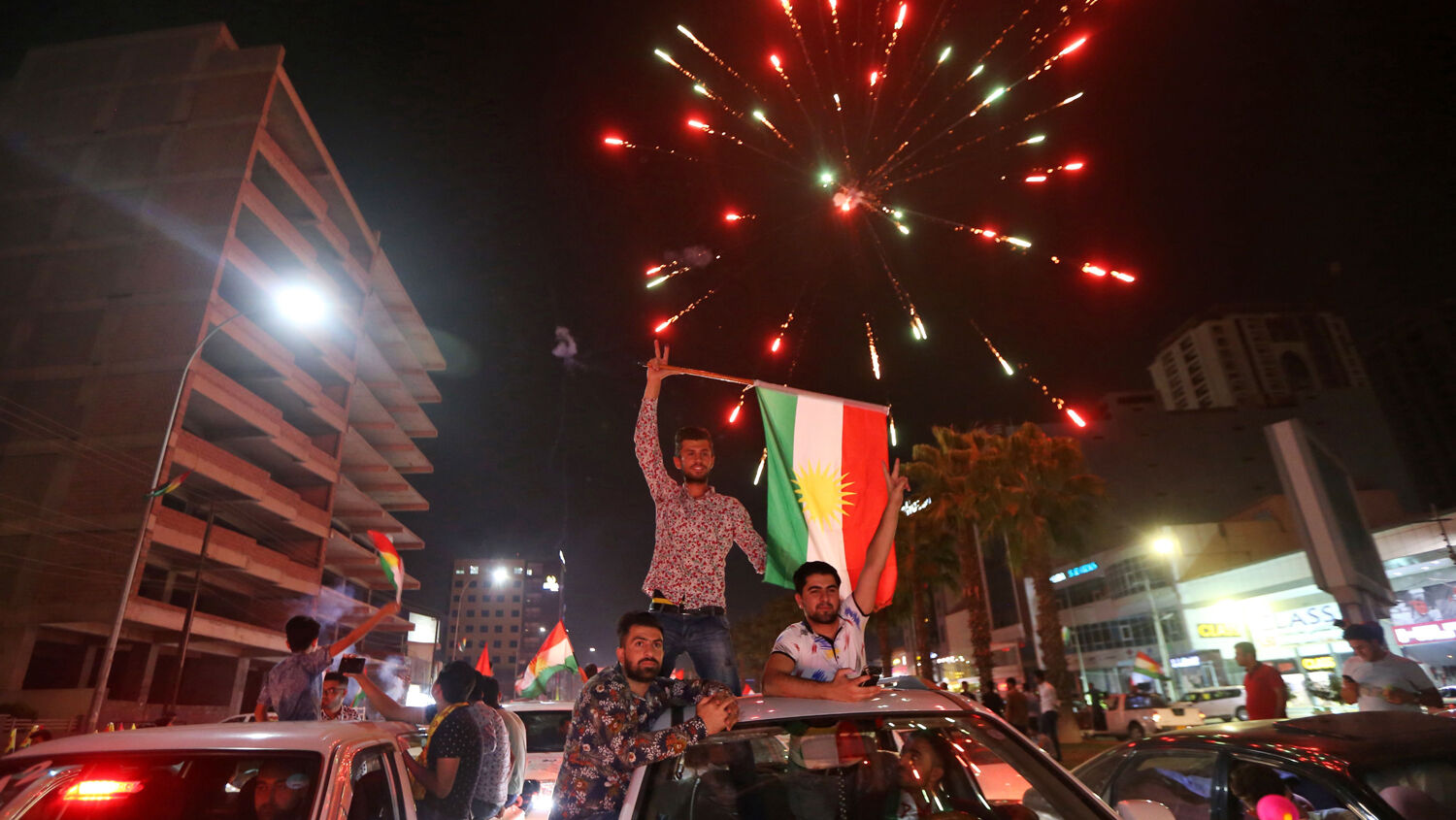 Iraqi Kurds wave the Kurdish flag as they celebrate in the northern city of Arbil on September 25, following a referendum on independence.
SAFIN HAMED/AFP/Getty Images

A new nation in the heart of the Middle East might further destabilize the world’s most volatile region.

If you have tended to mix up the “-stan” nations of Central Asia, you are not alone. But there’s a chance a new “-stan” will be added alongside Afghanistan, Kazakhstan, Kyrgyzstan, Pakistan, Tajikistan, Turkmenistan and Uzbekistan. The new country would be called Kurdistan. On Monday, the overwhelming majority of Kurds in Iraq voted for independence.

The Kurds live in their own semiautonomous region in northern Iraq: The region is already known as Kurdistan (“land of the Kurds”), but it is ultimately controlled by Iraq. For years, the Kurds have sought to secede completely from Iraq but have been unsuccessful, suffering repeated oppression and persecution.

The results of the vote for independence were not unexpected, but the fact that the vote was held and that more than 3 million voters (92 percent) participated could mark a turning point in Middle East geopolitics. The aftereffects of the vote could further destabilize a region that is already embroiled in bloody struggles for independence and civil wars.

The more than 40 million Kurds currently living in Iraq, Iran, Turkey, Syria and other parts of the region make up one of the world’s largest ethnic groups without a nation.

The Kurds have been pursuing independence since at least 1920. When the Ottoman Empire dissolved in the wake of World War i, Britain and France offered a somewhat arbitrarily redrawn map of the Middle East—the so-called Sykes-Picot map that Kurdish nationalists say should have included the nation of Kurdistan. The 1920 Treaty of Sèvres promised such a nation to the Kurds, but European powers essentially broke that promise to appease Turkey and Iraq. In 1970, Iraq’s Saddam Hussein signed an autonomy accord with Kurdish leaders. But in 1988, Hussein attacked thousands of Kurds with chemical weapons, killing an estimated 5,000 of them with poison gas. Then, after the United States encouraged the Kurds and other Iraqis to overthrow Hussein but failed to provide the support it had promised, Hussein’s regime slaughtered more of them. In a May 1991 article titled “America Has Won Its Last War,” Trumpet editor in chief Gerald Flurry called it “the greatest betrayal in U.S. history.” Post-Saddam Hussein Iraq has not been as murderous toward the Kurds, and has made promises of Kurdish independence, but those too have proved empty.

The Kurds remember this history.

The Kurds also know how incompetent the Iraqi government is—how subservient it is to the dictates of its eastern neighbors in Iran and how weak it was against Islamic State terrorists.

Some nations like Israel and, to a lesser extent, France, Greece, Poland, Sweden and Jordan, have expressed their support for Kurdistan independence. Russia, Belgium, Bulgaria and others are somewhat neutral. The U.S., Britain, Germany, Saudi Arabia and others oppose Kurdish independence. Iraq, Iran, Turkey and Syria have opposed it violently.

Such contentions are never good for the Middle East. In fact, they threaten to precipitate the violent climate that will lead to the fulfillment of certain Bible prophecies about the Middle East and Europe.

The office of Israeli Prime Minister Benjamin Netanyahu said on September 12 that Israel “supports the legitimate efforts of the Kurdish people to attain a state of its own.” Senior consulting research fellow at Chatham House, Prof. Yossi Mekelberg, said, “Israel’s main relations with the Kurdish regional government lies in economic and geostrategic interests. Israel doesn’t want a strong Iran in the region, and finding an ally in Iraq’s Kurdistan region will weaken Tehran.”

An independent Kurdistan would indeed be a huge obstacle in Iran’s drive to dominate the entire region from its eastern border up to the Mediterranean, via the contiguous region from Iraq to Syria and to Lebanon. The Kurds are, after all, “ready, like the Israelis are, to fight for life, not to celebrate death, but to fight for life,” according to Reuven Azar, the deputy chief of mission for the Israeli Embassy in Washington, D.C.

A new Kurdish state would not only further destabilize Iraq politically, it would weaken it economically as well. Already, Iraq accuses the Kurds of illegally exporting Iraqi oil from the 9 billion barrels of reserves under their control. The Kurdish-controlled, oil-rich Iraqi city of Kirkuk accounts for about 40 percent of Iraq’s total oil production. The last thing Iraq (and the global oil market) wants is a disruption of oil supply from Kurdistan.

An independent Kurdistan could also reignite Kurdish insurgencies in other nations with significantly large populations of Kurds—nations like Syria, Iran and Turkey.

On September 14, before the independence referendum was conducted, the Turkish Foreign Ministry warned that “there will most certainly be a price to pay” for holding the vote. A week later, Turkey’s National Security Council said the referendum itself threatened Turkey’s national security; the nation’s parliament then authorized military intervention in Iraq or Syria if it deemed itself threatened. Already, Turkey is conducting military exercises on its border with Kurdistan. Following the referendum, Turkish President Recep Tayyip Erdoğan threatened to invade Iraqi Kurdistan and to impose sanctions that would starve the Kurds.

Iran vowed to cooperate with its ally Iraq and its rival Turkey to oppose a Kurdish nation. Iran, like Turkey, launched its own military exercises on its border with Kurdistan. A senior adviser to Iranian Supreme Leader Ayatollah Ali Khamenei said, “The Muslim nations will not allow the creation of a second Israel.” If Iran’s treatment of the “Little Satan” is any indication, the Kurds will be in for a bitter struggle.

On September 14, the influential Shiite leader of Iran’s oldest proxy in Iraq, the Badr Organization, said that civil war would be “inevitable” after the vote. A week later, at Iraq’s request, Iran imposed an air embargo on all flights to and from Kurdistan to pressure and intimidate the Kurds. Iraqi Prime Minister Haider al-Abadi then demanded that the Kurds surrender control of the two international airports in Kurdistan.

Kurdish groups in Syria, recently empowered by the Syrian civil war, are a thorn in Syrian President Bashar Assad’s side, as the Raddington Report wrote on September 11. Assad is now “faced with a tough choice: intervene in Rojava [the semiautonomous Kurdish region in northern Syria] and reclaim the land through the use of force, or accept that Syria is no longer whole.”

Little wonder these nations are concerned about an independent Kurdistan.

The U.S. wanted the referendum canceled because it feared the vote could distract its Kurdish allies from the fight against the Islamic State. It is also possible that American opposition to a Kurdish state stems from American concerns about Middle East responsibilities and fears of the unknown. As the Washington Institute for Near East Policy wrote, “A strong, inclusive and economically sustainable independent Kurdistan is only possible if it is both recognized and supported by the United States.” The U.S. “must become the protector of not only Kurdistan but the region,” assessed Paul Davis, a retired U.S. Army military intelligence analyst.

What if Kurdistan does become an independent nation? What if the U.S. cannot protect an independent Kurdistan from Iranian and Turkish meddling directly or via proxies? Who would intervene in America’s stead? What if the Middle East becomes even more chaotic than it already is? What if a Kurdish referendum and independence ferments a “Kurdish Spring” or an “Arab Spring” in other nations in the region? What if Kurdish ethnonationalism triggers events that confirm that “Syria is no longer whole”?

We cannot divine the future.

He has already prerecorded specific details about the future of specific nations in the Bible. And without any reservation or hesitation, He has stacked His reputation on those prophecies becoming reality. “I am God, and there is none else; I am God, and there is none like me,” He says in Isaiah 46:9-10. “Declaring the end from the beginning, and from ancient times the things that are not yet done, saying, My counsel shall stand, and I will do all my pleasure.”

The late Herbert W. Armstrong, editor in chief of the Trumpet’s predecessor, the Plain Truth, wrote in The United States and Britain in Prophecy that the U.S. is prophesied to disengage from the Middle East (and other regions) out of weakness and be replaced primarily by Europe and Germany. History and Bible prophecy indicate that America is too weak-willed to successfully patronize yet another needy, vulnerable nation in the Middle East.

Mr. Flurry wrote in The King of the South that the Middle East is indeed about to become even more chaotic than it already is.

He discusses Bible prophecies that show Iran’s domination of the “south”—the Middle East. He explained how the Bible indicates that Iraq would fall to Iran, as it assuredly already has. Bible prophecy indicates that Iran will do all it can to protect its interests. Considering that most of the major powers of the world oppose Kurdish independence, Iran already has an advantage. Iran has the brutishness, the militant proxies and the financial resources to fight to the bitter end for a Persian Empire. Kurdish independence or not, Iran will not lose its prophesied control of the bulk of Iraq. But the chaos Iran will create in the process is prophetically significant.

Iran, however, is prophesied to lose its control of Syria, and the fallout from the Kurdish referendum might contribute to that outcome. In The King of the South, Mr. Flurry discusses those prophecies that indicate major shifts in Middle Eastern geopolitics and military and ethnic alliances. One of those prophecies, found in Psalm 83, indicates that no matter how much Iran does to protect its interests, it will lose its tight grip on Syria.

Again, these prophecies say nothing about Kurdistan in any specific language. In fact, an independent nation of Kurdistan might never exist. Nevertheless, the mere prospect of an independent Kurdistan is a geopolitical upheaval that could have major prophetic ramifications—ramifications that will determine the future of Iraq, Syria and Iran.