The natural world itself answers the question. 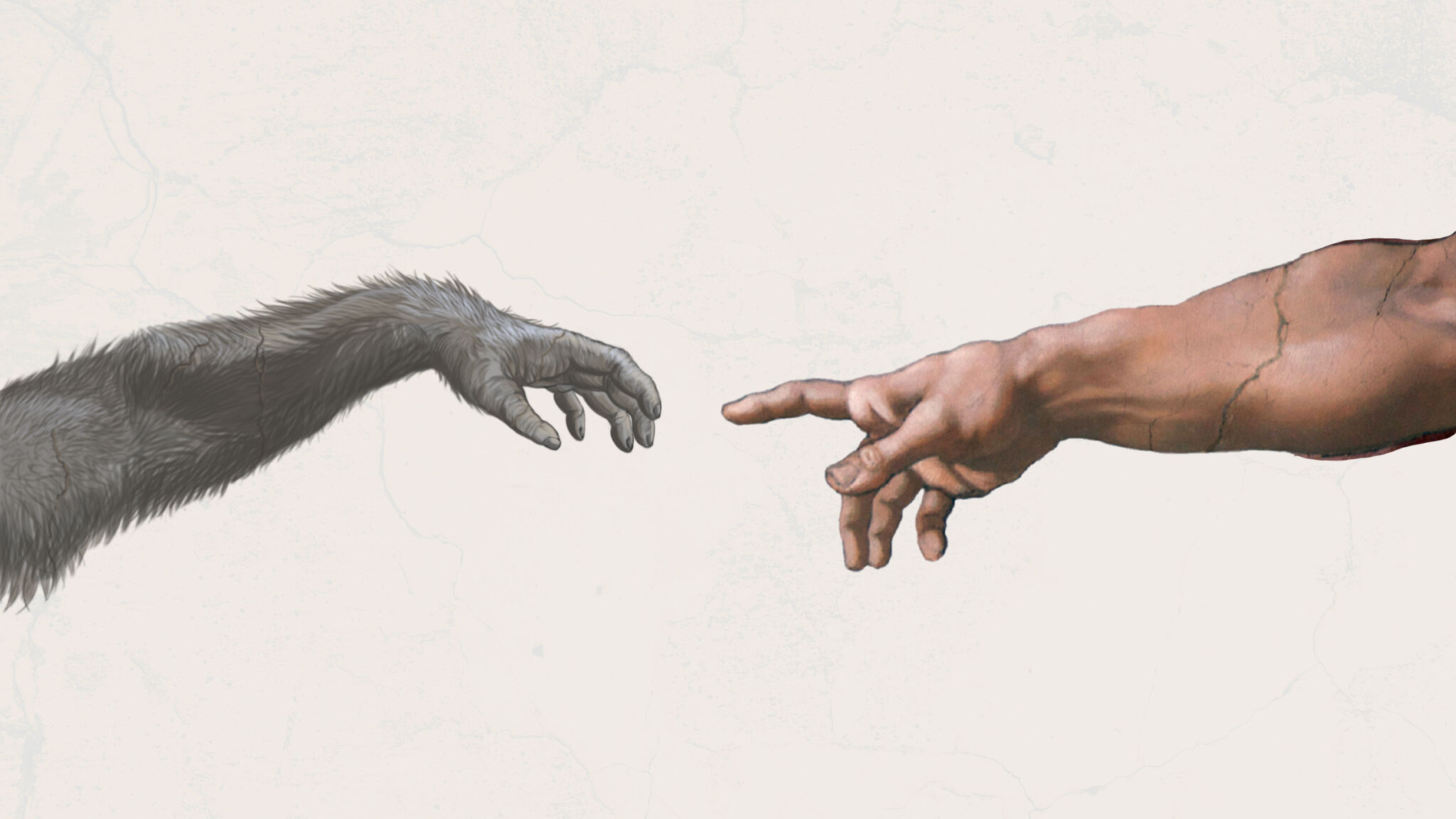 The natural world itself answers the question.

Creation or evolution? Few questions are as divisive, and most people are convinced they know the correct answer. Earth is the only planet with life, and it has millions of forms of it. Was it all crafted by an intelligent designer? Or did it all evolve from a single-cell ancestor? Since Charles Darwin published On the Origin of Species by Means of Natural Selection, these questions have divided creationists from evolutionists.

But now, more and more people—including the pope—say you can believe both creation and evolution. “God is not … a magician, but the Creator who brought everything to life,” Pope Francis told the Pontifical Academy of Sciences. “Evolution in nature is not inconsistent with the notion of creation, because evolution requires the creation of beings that evolve” (Oct. 27, 2014). In other words, the pope is saying God creates new species by using evolution.

In the United States, most Buddhists, Hindus, Jews, Catholics and mainstream Protestants believe evolution is the best explanation for the origin of human life. Evangelical Protestants and Sabbath-keeping Christians believe God sculpted man in His own image and likeness.

A May 2017 Gallup poll shows that 38 percent of U.S. adults believe God guided the process of human evolution over millions of years. For the first time since Gallup began tracking this trend in 1982, the belief that God directly created man is not the most common response.

The idea that God directs the evolutionary process is called theistic evolution. Is it true?

It is important to understand the plain truth about the origin of species and how human life began.

The Blueprint of Life

From the microscopic amoeba to the giant sequoia, every living thing has its own genome. A genome is the sum of an organism’s genetic material. Molecules called nucleobases join to form larger molecules called base pairs. These base pairs stack together to form long, twisting chains ofdeoxyribonucleic acid (dna). These dna chains store the instructions for building the various proteins that construct an organism. They are the blueprints of life.

A chain of dna containing enough information to make a protein is a gene. These genes pass from one generation to the next generation in bundles called chromosomes. If you compare a genome to a set of written instructions on how to build a living being, nucleobases are like letters, base pairs are like words, genes are like chapters, chromosomes are like books, and the genome is like an entire library.

Geneticists estimate that every cell in the body of a songbird contains 2 billion nucleobases, clustered into 17,000 genes. If you wrote a manual on how to “build” a songbird using one letter per nucleobase, it would be seven times longer than the Encyclopedia Britannica.

The human genome is even more complex.

Mutations do not spontaneously create new and better physical traits; they destroy the fine-tuned intricacy of the genes God originally created.

Really, there is no technology that serves as an analogy for the complexity of a genome.

“The genome is not just a simple string of letters spelling out a linear series of instructions,” Dr. John Sanford writes in his book Genetic Entropy. “It actually embodies multiple linear codes that overlap and constitute an exceedingly sophisticated information system embodying what is called data compression. … In addition to multiple, overlapping, linear, language-like forms of genetic information, the genome is full of countless loops and branches, like a computer program.”

A list of nucleobases represents only the first dimension of complexity of the genome. The analogy of an encyclopedia will prove useful in explaining how genetic information passes from generation to generation. But it does not even begin to scratch the surface of the genome’s wondrous design.

When high-school students first start studying the hypothesis of evolution, they learn about finches. These songbirds are native to the Galápagos Islands and exhibit remarkable diversity in beak size, shape and function.

Darwin studied 15 varieties of these birds, each having a special beak that enables it to feed on different types of food. One variety has a large beak useful for cracking seeds. Another variety has a long beak useful for probing out grubs. Other beak shapes allow finches to eat insects, fruits, leaves or cactus nectar.

Why all this variety? Is it all due to the process that Darwin called natural selection?

Geneticists have discovered a gene, called alx1, that seems to be primarily responsible for variation in beak size, shape and function. A finch’s beak shape is determined by what genes it inherits from its parents. Since different varieties of finches can interbreed, it is possible for a finch to inherit different forms of the alx1 gene from each parent. So a big-beaked male and a small-beaked female can have a medium-beaked chick.

Darwin’s hypothesis of natural selection predicts that a finch with the best type of beak for a particular environment will outcompete finches and have more chicks than his neighbors. Thus his beak type will become more common as finches with other beak types die out. The idea underpinning “natural selection” removes God from the equation, as though He had nothing to do with where animals and people settled. It suggests it is nature that does the selecting.

The Bible says it is God who feeds the finches of the Galápagos Islands. “Behold the fowls of the air: for they sow not, neither do they reap, nor gather into barns; yet your heavenly Father feedeth them. Are ye not much better than they?” (Matthew 6:26).

It is important to note that even what evolutionists term “natural selection” could never create new genetic information. The genes for all 15 types of beaks already exist in the world’s finch population. In certain situations, environmental factors might influence whether genes are passed to a new generation. But you cannot select for nonexistent genes.

“Natural selection may explain the survival of the fittest, but it cannot explain the arrival of the fittest.” That’s how botanist and geneticist Hugo de Vries described the problem Darwinists face. Creatures can pass a variety of characteristics to their offspring—but only within set limits. Nature cannot create new traits that did not already exist within a population’s genome.

Small changes within a species are sometimes called adaptations. Such adaptation occurs when the gene for big beaks becomes more common in a population of finches, for example. But there always comes a point where finch beaks cannot get any bigger. The genes for beaks past a certain size do not exist in the finch genome, just like the genes for gills do not exist in the finch genome. The only way a finch can add new genes to its chick’s genome is by breeding with a finch that possesses those genes. So, a finch’s adaptive potential is limited by the type of animals it can breed with to produce a new generation.

Scientists classify finches into 15 different species. Since each of these species can interbreed with the others, they are just varieties of what the Bible would call the finch “kind.” Likewise, scientists classify coyotes, dingoes, golden jackals, gray wolves, red wolves and 340 breeds of domestic dogs as different species, but they are varieties of the dog “kind.”

Theistic evolutionists claim that God created finches by making gradual alterations to amoebas over millions of years, but this is simply not what God’s Word clearly states.

The Problem With Mutations

When Charles Darwin wrote On the Origin of Species by Means of Natural Selection in 1859, scientists knew almost nothing about genetics. Darwin could observe that offspring inherited physical characteristics from their parents. But he knew that his observations explained only how old traits were preserved, not how new traits were created.

When Darwin speculated that one kind of organism was able to evolve into another kind, he was taking a leap into fantasy.

When Hugo de Vries discovered mutations in the 1890s, evolutionists hypothesized an idea called neo-Darwinism. Mutations are errors in the dna replication process. According to neo-Darwinism, these random and rare genetic errors create new genes. They say natural selection then weeds out the bad genetic errors and selects the good ones.

The trouble with this hypothesis is that mutations are random errors at the nucleobase level of a genome. Remember if you compare the genome to a library, genes are chapters and nucleobases are letters. So a mutation is like an extra letter “a” printed in a 225-volume genetics manual on how to build a songbird. If you reprint an encyclopedia with one typo every year, the encyclopedia is not going to randomly evolve a new chapter on beak shapes—no matter how many times it is reprinted. Instead, it will degenerate into a jumble of letters that fails to tell you how to build anything at all.

If you wrote a manual on how to “build” a songbird using one letter per nucleobase, it would be seven times longer than the Encyclopedia Britannica. The human genome is even more complex.

The average gene in a songbird’s genome is over 100,000 nucleobases long, and only mutations occurring in a sperm or egg cell are passed on to the next generation. Since most traits require information from more than one gene, the neo-Darwinism hypothesis would require millions of perfectly timed, beneficial mutations to create a finch beak perfectly shaped for eating seeds. And it could only require one harmful mutation to destroy the intricate instructions for such a perfect beak.

This is why American zoologist Edwin Conklin said, “The probability of life originating from accident is comparable to the probability of the Unabridged Dictionary resulting from an explosion in a printing factory.” He was dramatically understating the absurdity of Neo-Darwinist evolution.

To think the wondrous complexity of even one gene, let alone an entire genome, resulted from undirected mutations defies logic. Some argue that an omnipotent Creator could secretly guide the process of mutation. However, the Bible emphatically states that God created each kind of plant and animal in a single week. Since there are no fossils showing one kind of organism evolving into another kind, the natural world itself provides no evidence to refute the Bible’s account.

It is a principle of entropy that a closed system always tends toward a state of disorder, unless maintained by an outside force. The genome of living things is no different. Genetic mutations cause information to be lost, not gained. Therefore, genetic mutations are harmful to an organism. They only explain the presence of varieties less fit to survive.

There is some evidence that damage done to dna chains by mutations is what causes organisms to age and die. Beyond these preprogrammed mutations, however, additional mutations can result from broken physical laws. Improper diet, drug abuse and exposure to harmful radiation have all been shown to increase the likelihood of genetic mutations.

These mutations do not spontaneously create new and better physical traits; they destroy the fine-tuned intricacy of the genes God originally created.

The Bible clearly shows that the genome of each kind of creature was the most perfect on the day God created it. In the years since, these genomes have decayed.

The main reason theistic evolution has become so popular today is that people struggle to reconcile the clear word of the Bible with the false principles of science being taught in most high schools and universities. But an honest study of both genetics and physics shows there is no contradiction between the Bible and true science.