In the wrong hands, even just one lost nuclear weapon could be disastrous. 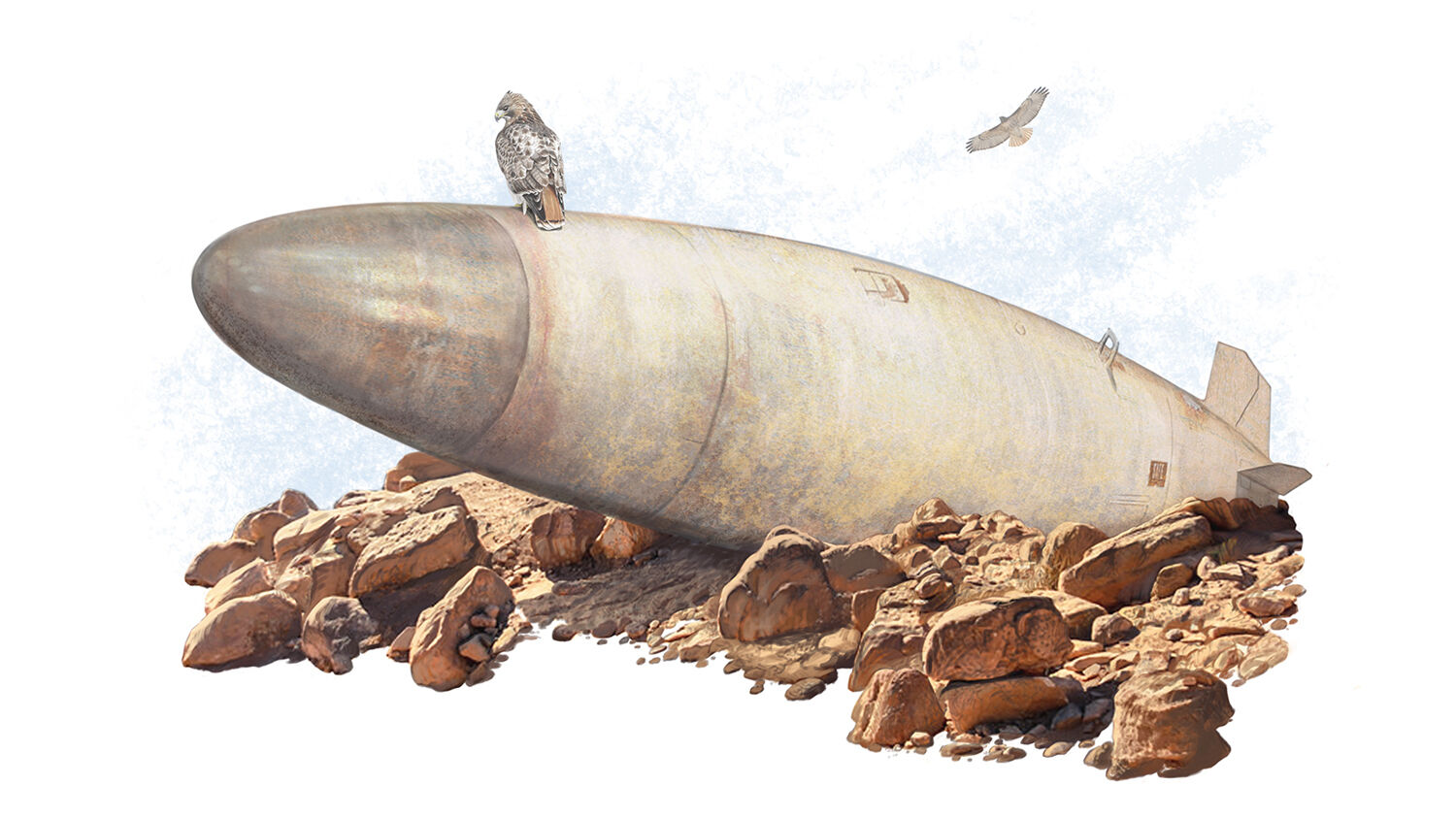 In the wrong hands, even just one lost nuclear weapon could be disastrous.

On Dec. 5, 1965, Lt. Douglas M. Webster climbed into his aircraft as he prepared to take part in a round of United States Navy training exercises. The plane was an A-4E Skyhawk, on board the uss Ticonderoga aircraft carrier. The Ticonderoga was en route from duty along the Vietnamese coast to a port call in Japan. When the ship was 70 miles east of Okinawa, Webster’s Skyhawk accidentally rolled off the deck and plunged into the Pacific.

One other important detail: Webster’s jet was carrying a one-megaton B-43 thermonuclear bomb, with a yield 70 times larger than the weapon detonated on Hiroshima, Japan, 20 years earlier.

Crews from the Ticonderoga and its escort ships spent hours searching. But Webster, his plane and the nuclear weapon were never found. The U.S. government kept the incident confidential until 1989.

This event was neither the first nor the last time that American forces suffered “Empty Quiver” or “Broken Arrow” incidents—military code words describing the accidental firing, seizure, theft or loss of nuclear weapons.

“There always is the possibility of an accident,” said David G. Jackson, former public affairs officer for the U.S. Department of Energy.

The United States has acknowledged 32 such accidents, the first in 1950 and the latest in 1980. “A couple of weapons were accidentally dropped from aircraft,” Jackson said. “There have been midair collisions, there have been planes destroyed in terrible weather; the planes just came apart, and the bombs went on down. Some weapons that were jettisoned at sea, mostly in deep water, so many years ago that, by now, who knows what’s down there?”

In the case of at least seven weapons, U.S. officials acknowledged that they never recovered the strays:

1956 A B-47 flying from MacDill Air Force Base in Florida toward a base in Morocco vanishes. It was carrying two nuclear weapon cores and is believed to have crashed somewhere around the Morocco-Algeria border. Despite extensive search efforts, no debris or crash site is ever found—at least not by U.S. authorities.

1961 A B-52 armed with two 24-megaton nuclear weapons crashes near an air base in Goldsboro, North Carolina. One of the bombs falls somewhere in the swampy terrain and is never recovered.

1965 The Ticonderoga loses Lieutenant Webster, his Skyhawk and its one-megaton B-43 munition.

1968 The uss Scorpion submarine vanishes near the Azores Islands in the Atlantic along with its 99 crewmen and two 11-kiloton Mark 45 antisubmarine nuclear torpedoes. The Navy searches for the vessel for nine days and finds no sign of it. A later mission locates the wreckage and verifies that the torpedo room remains intact, but it is unable to retrieve the nuclear weapons.

The U.S. military does not acknowledge the occurrence of any Broken Arrows or Empty Quivers since 1980. This doesn’t mean no nuclear weapons incidents have occurred since then, but only that the government keeps more recent incidents classified, mainly for security reasons.

And the United States is not the only nation to occasionally lose track of a nuclear weapon.

Back in the USSR

In 1949, the Soviet Union became the second nation to successfully test an atomic device. Within a few years, the Soviet military had deployed an abundance of deliverable nuclear bombs. With this proliferation came numerous Soviet Broken Arrows and Empty Quivers.

One of the most notable Soviet incidents occurred in October 1986, after the seal failed on a missile hatch cover of a Soviet Yankee i-class nuclear-powered ballistic missile submarine. The failure led to a fire, and the submarine sank—along with an estimated 34 nuclear weapons.

At the time of the Soviet Union’s collapse in 1991, its vast arsenal included more than 27,000 nuclear weapons and enough highly enriched uranium and plutonium to manufacture 54,000 more. After the chaotic downfall, the former Soviet republics of Belarus, Kazakhstan and Ukraine are believed to have transferred all their Soviet nuclear arms to Russia. But security in these former Soviet states was, and in some cases still is, notoriously insufficient. And these nations still possess reserves of weapons-grade plutonium and uranium.

There have been no authenticated reports of Soviet nuclear weapons being stolen or lost during the post-ussr transfer, but abundant evidence indicates that there is a vibrant black market for nuclear materials. From 1993 to 2015, the International Atomic Energy Agency (iaea) reported 2,880 confirmed incidents of nuclear trafficking, theft, smuggling, loss and other unauthorized activities, 30 of which involved highly enriched uranium, which is the primary component of nuclear weapons. “Some of these incidents involved attempts to sell or traffic these materials across international borders,” the iaea said.

The report noted that the iaea knows only about failed smuggling attempts, adding, “The number of successful transactions is not known ….”

Experts believe that corrosion and contamination has rendered most of the weapons that fell into the oceans unable to produce nuclear explosions. They say most of those on the seafloor—such as the one on Webster’s Skyhawk—probably pose little danger beyond radiation harm to the local marine environment. Experts also say security safeguards are built onto many such weapons to prevent unauthorized personnel from being able to detonate them. There is also the fact that tritium gas in nuclear weapons normally needs to be replenished periodically to keep them detonable. These factors combine to mean that most of the world’s stray nuclear materials and nuclear weapons may not present a grave threat.

But all it would take is one.

One nuclear weapon falling into the hands of a team determined to either repair or reverse-engineer it could pose a serious threat. And that brings us to Iran.

Trumpet editor in chief Gerald Flurry writes in his free booklet Daniel Unlocks Revelation: “Today, the regime started by the Iranian Revolution is trying to take over the whole Arab world! … It’s about to achieve nuclear status, and other nations are too weak to stop it! Iran will keep pushing the West until it gets a fight.”

In his article titled “America’s Deadly Nuclear Deal With Iran,” Mr. Flurry wrote: “Iran is pushing and pushing its foreign policy. It is about to push so hard and so aggressively that it will launch a massive war! But it won’t be with the United States, which is now too weak to even fight such a war. … [Y]ou see Iran pushing aggressively at America and also very forcefully against Europe; … you see the very real threat of war; you see the very imminent threat of nuclear bombs eliminating millions of people” (Trumpet, October 2016).

Mr. Flurry’s statements are based on specific Bible prophecies that describe a coming nuclear World War iii that Iran’s pushing against Europe will soon trigger.

Today, analysts around the world regularly label the Islamic Republic of Iran as the leading state sponsor of terrorism. Underwriting such brutal behavior is among the most confrontational or “pushy” policies a country could implement, and helps to pinpoint the “king of the south” as radical Islam led by Iran. Verses 42-43 indicate that, when the third world war breaks out, this Middle Eastern power will have some degree of partnership with Libya, Egypt and Ethiopia. Also pertinent is that most of the radical Islamists in these and other regions that Iran sways lie mostly to the south of Israel. (For detailed proof that the “king of the south” is modern Iran, request Mr. Flurry’s free booklet The King of the South.)

The “king of the north” in this passage refers to a united European power that will be led by Germany and guided by the Vatican. An examination of Revelation 17 makes this clear and delivers key details about this mighty church-state combine, which is already materializing today. Daniel 8:23-24 say this “king” will “destroy wonderfully.” (For thorough proof that the king of the north will be a German-led European power, request our free book The Holy Roman Empire in Prophecy.)

This all makes clear that when radical Islam, as led by Iran, pushes against the united European power that is influenced by the Vatican, that push will be the spark that ignites nuclear World War iii.

Thanks in large part to the Joint Comprehensive Plan of Action (jcpoa) nuclear deal that the Obama administration implemented with Iran on Jan. 16, 2016, the Iranians will soon be able to develop nuclear weapons without outside assistance. There is also ample evidence that assistance from North Korea could be hastening Iran’s race toward that milestone.

But what if Tehran, or terrorists from one of the many groups that Iran supports, were to acquire one of the Broken Arrow or Empty Quiver weapons lost by the U.S. or Russia? This would boost the capacity of the king of the south to intensify its push against Western powers. This would be the case even if the nuclear materials they obtained were only used to make a dirty bomb: a weapon combining conventional explosives with radioactive materials in order to contaminate the area around the conventional explosion with radioactive material. Such a detonation in a city like Jerusalem would be a history-altering event.

Whether or not the world’s stray nuclear materials end up contributing to the spark that ignites that final world war, Bible prophecy makes clear that it will be an unprecedentedly destructive conflict. In Matthew 24:21-22, Jesus Christ is recorded as saying: “For there will be greater anguish than at any time since the world began. And it will never be so great again. In fact, unless that time of calamity is shortened, not a single person will survive …” (New Living Translation).

This could only be describing a global nuclear war with enough detonations to cause nuclear winter.

Yet as we see that utterly devastating and dark time of war approach, there is cause for profound hope! Continuing that passage in Matthew 24:22, just after Christ says that nuclear war at the end of this age will be so devastating that it could end all human life, He then adds a crucial detail: “But it will be shortened” (nlt).

Before man detonates enough weapons to entirely obliterate himself, Jesus Christ will cut the war short. Following just after that season of unprecedented death, He will usher in an age of unprecedented peace. Regarding this future time of worldwide tranquility and prosperity, Isaiah 2:4 says: “[N]ation shall not lift up sword against nation, neither shall they learn war any more.” War, nuclear and otherwise, will then be a relic of a bygone era.