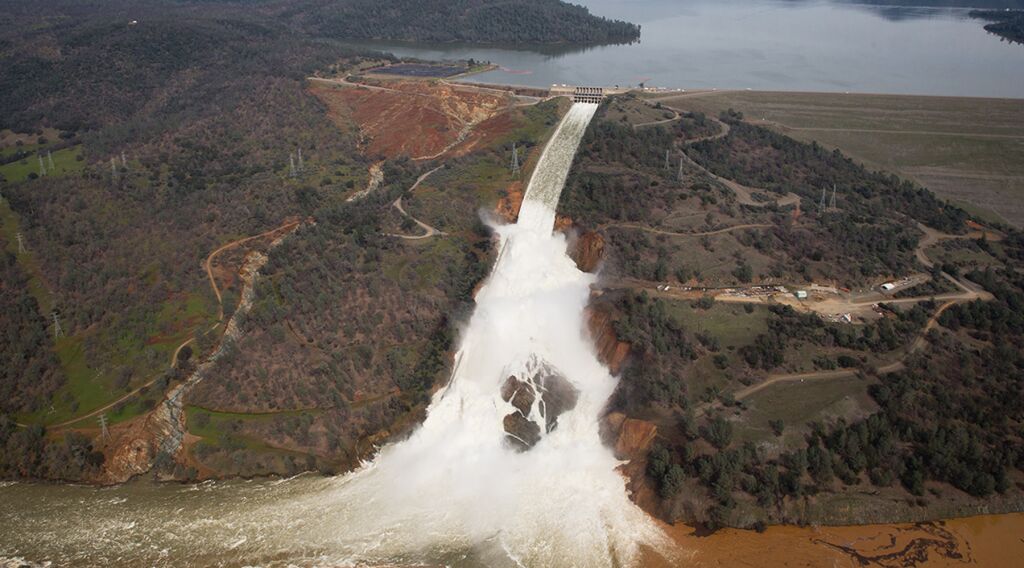 Last week, massive rainstorms hit parts of northern California. The rain brought much-needed relief to the drought-stricken state but also another crisis. Water levels in Lake Oroville, a reservoir held back by the nation’s tallest dam, rose more than 50 feet in just a few days.

As water levels rose, engineers had to open the dam’s main spillway, a concrete channel that diverts water away from the dam and into the Feather River below. Prior to the storms, the primary spillway channel was suffering from lack of attention and poor maintenance and marked with craters. As the water rushed down, cracks started to emerge, and the spillway began to break apart, then eroded away as water continued to spill out uncontrollably.

(video of the primary spillway)

To alleviate the flow on the primary spillway, engineers relied on the emergency spillway, an earthen channel with a holding basin, which had never been used in the dam’s history.

The emergency basin functioned until Sunday, when it too began to erode away, sending an uncontrollable volume of water into the river below.

The overwhelmed dam prompted state authorities to quickly call for the evacuation of over 180,000 residents living in the flood plain below the dam. The rain has since stopped, however, and water levels are receding. Now workers are rushing to make repairs before the next series of storms hits.

(video of the emergency spillway)

Blame for the potential catastrophe is being passed around. The state ignored warnings back in 2005 from three environmental groups that called for the dam’s emergency spillway to be reinforced with concrete. Yet last week’s rain produced water flows well below the maximum amount officials believed the basin could hold, and it was still enough to erode the channel. Ailing infrastructure and government oversight are partially to blame. But, explaining why California went from extreme drought to crisis-level flooding is the question many people cannot answer.

The Atlantic described California’s flooding problem as a “bitter irony” to a state that has been so plagued with drought.

Are California’s problems just a matter of happenstance?

In recent decades, America’s Golden State has experienced record wildfires, extreme drought, massive earthquakes and flooding. Even an excellent human government could not withstand such a barrage of environmental disasters.

The October 2014 issue of the Trumpet magazine included an infographic about California’s record drought. Lake Oroville was one of many reservoirs in California that was well below average capacity. It took only a few days of rain in 2017 for that image to change from a dried-out reservoir to a torrent of raging water ripping apart the dam’s spillways and causing the evacuation of almost 200,000 people.

The Editorial Board of the Sacramento Bee wrote a short piece asking for politicians to set aside differences and focus on fixing California:

We may think we tame nature. We kid ourselves. An earthquake can strike at any time, liquefying seemingly solid ground, lifting entire buildings off their foundations, and fracturing bridges. Parts of Malibu can slide into the Pacific in one rainy season. A few months later, fire can destroy entire communities in the Sierra foothills.The current situation cannot be attributed to climate change alone. Scientists say no single event can be laid at the feet of global warming. But they also say climate change leads to extreme weather patterns. And California certainly is experiencing extremes. California is ending five years of drought, and now is experiencing one of the wettest rainy seasons on record.

In 2003, Trumpet editor in chief Gerald Flurry asked, “Is California Under a Curse?” In his article, he wrote, “God does punish us with ‘natural’ disasters.”

The solutions to California’s problems are far beyond climate change, infrastructure choices or politics. In his article, Mr. Flurry refers back to a piece he wrote in 1993, saying, “One disaster after another is striking California. These deadly disasters are repeatedly labelled the ‘worst ever’! … With all the disasters that have struck California the past few years, it’s as if the state is under a curse.”

That article is as timely today as ever. These weather disasters are warnings from God designed to get people’s attention. Here is what we wrote in our free booklet, Why ‘Natural’ Disasters?:

The God of the Bible is not impotent. He wields the punitive sword of flood and mildew—and also that of drought (Deuteronomy 28:22; 11:17). Sometimes He uses both at the same time in order to heighten their corrective power: “And also I have withholden the rain from you, when there were yet three months to the harvest: and I caused it to rain upon one city, and caused it not to rain upon another city: one piece was rained upon, and the piece whereupon it rained not withered” (Amos 4:7). Notice—this is God talking through His Prophet Amos. God causes these weather disasters! In one region God sends a drought—in another region, floods—and it all happens right before harvest time. And why? God causes it because we haven’t returned to Him (verse 8). Amos is trying to help us see the connection between extreme weather upsets and human sin.

These extreme weather events are going to worsen in parallel with the worsening, not of partisanship, emissions or budgets, but of the nation’s sins. California went from five years of crisis-level drought to devastating floods in just a matter of days. It’s time we start asking, Why ‘natural’ disasters?

For more on this topic, read your free copy of Why ‘Natural’ Disasters? along with Mr. Flurry’s 2003 article “Is California Under a Curse?”