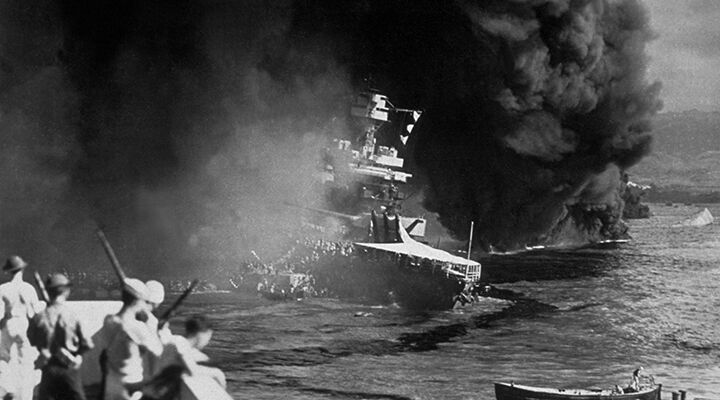 On the rolling decks, the whine of starter motors pierced the dark pre-dawn. One by one, cold engines reluctantly coughed, sputtered, then growled to life. As the first rays of light appeared in the early dawn of December 7, 1941, swarms of planes from carriers in the Pacific climbed into the air and turned their roaring engines toward Oahu, Hawaii. The opening scene that would forever be known as the “day of infamy” had begun—the attack on Pearl Harbor.

Many on the island were still sleeping—after all, it was Sunday. Some were just awaking, yawning in their beds. Others were preparing for breakfast. On the decks of ships, flags were being raised while crews sang the national anthem: “Oh, say, can you see, by the dawn’s early light….”

Suddenly came the angry scream of diving planes flashing through the sky. Soon the staccato “tata-tata-tata” of machine guns and the ear-splitting, crescendoing roar of falling and exploding bombs destroyed the calm of that Sunday morning as death descended from the sky.

The U.S. ships and personnel there that day were totally unprepared for what occurred. That continues to be an issue of hot debate, but the fact is they should have been prepared. They had been warned time and time again.

In the Grand Joint Army-Navy Exercises of 1932, Pearl Harbor was “attacked” in a training simulation by 152 planes a half-hour before dawn (on a Sunday). An attack which caught the “defenders” of Pearl Harbor completely by surprise. In 1938, Admiral Ernst King led a carrier-born air strike from the USS Saratoga against Pearl Harbor in another exercise. Again, the “attackers” were successful in achieving total surprise.

On November 11, 1940, 21 aged British planes destroyed the Italian fleet, including three battleships, at their home port in the harbor of Taranto in Southern Italy by using technically innovative shallow-draft torpedoes and further demonstrating the effectiveness of a surprise from the air.

In spite of all this, with war believed to be imminent, the most powerful and most crucial part of the American defense in the Pacific, the U.S. Pacific Fleet, usually berthed on the west coast of the United States, was moved to the Pearl Harbor naval base in Hawaii. The fleet arrived on April 2, 1940. It was scheduled to return to the United States mainland around May 9, but this plan was drastically changed because of increasing activity in Europe and Japan’s attempt at expansion in Southeast Asia. Conflict involving Southeast Asia was a distinct probability.

Warnings continued to come. On January 27, 1941, Dr. Ricardo Shreiber, the Peruvian envoy in Tokyo, told a secretary at the U.S. embassy that he had learned from intelligence sources of a war plan involving a surprise attack on Pearl Harbor. This information was sent to the State Department and Naval Intelligence and to Admiral Kimmel in Hawaii.

On March 31, 1941, a Navy report predicted that if Japan made war on the U.S., they would strike Pearl Harbor without warning at dawn with aircraft from a maximum of six carriers.

On August 10, 1941, a top British agent, code-named “Tricycle,” told the FBI that a planned attack on Pearl Harbor would occur very soon. He also reported that a senior Japanese naval person had gone to Taranto to collect all secret data on the attack there.

Early that fall, Kilsoo Haan, an agent for the Sino-Korean People’s League, told Eric Severeid of CBS News that the underground in Korea and Japan had positive proof that the Japanese were going to attack Pearl Harbor before Christmas. This was later reported to U.S. Army and Navy Intelligence.

Far more warnings were given than can be mentioned here, but the fact is, Pearl Harbor need not have happened. It was predicted long before it happened. When we don’t like the message, human nature always attacks the messenger.

Two men stand out in their extreme efforts to warn of the coming disaster. When the fleet was ordered from the West Coast to its station at Pearl Harbor, its commander, Admiral James Richardson, protested that the fleet would be dangerously exposed. He knew that history had proven there was inadequate protection from air attack and no protection from torpedo attack, and he felt so strongly that he twice respectfully refused to berth his fleet there. He raised the issue personally with the President in October.

Admiral Harold R. Stark, chief of naval operations, was the one who originally made the decision to extend the crew’s stay in Hawaii; and, in spite of Admiral Richardson’s complaints, Stark maintained that the Pacific Fleet was strategically needed in Hawaii to keep the Japanese from entering the East Indies. All of Richardson’s objections, in meetings with both the secretary of the Navy and the President, got him nothing but a dismissal shortly thereafter. If we don’t like the message, we always get rid of the messenger.

Admiral Richardson was not alone. The chief of naval intelligence was replaced because he insisted that Pearl Harbor should be warned of impending attack. That insistence resulted in his dismissal also. It was lack of information like this that led to the exoneration of the Hawaii commanders and subsequent blaming of Washington for unpreparedness for the attack by the Army Board and Navy Court.

And so, history—in spite of many warnings—was to be written in blood. As death rained from the sky that fateful morning, this message was sent out to all who could hear: “7 December—7:55 a.m. Hawaii time. Air raid Pearl Harbor. This is not a drill.”

They were not practicing war this time. No more warnings. This was real!

Harry Hopkins, who was the only person with President Roosevelt when he received the news of the attack by telephone, wrote that the President was unsurprised and expressed “great relief.” Eleanor Roosevelt wrote about the event in This I Remember. According to her, Mr. Roosevelt became “in a way more serene.” In the New York Times magazine of October 8, 1944, she wrote, “Dec. 7 was…far from the shock it proved to the country in general. We had expected something of the sort for a long time.” Winston Churchill added this commentary later: “From the end of 1940, the Americans had pierced the vital Japanese ciphers and were decoding large numbers of their military and diplomatic telegrams…. [The U.S. leadership] knew the full and immediate purpose of their enemy…. A Japanese attack upon the U.S. [would mean] a vast simplification of problems and their duty. How can we wonder that they [the Americans] regarded the actual form of the attack, or even its scale, as incomparably less important than the fact that the whole American nation would be united…?” (Grand Alliance, pp. 598, 603, 602).

Of the approximately 100 ships in the harbor that day, eight battleships were damaged with five sunk. Eleven smaller ships, including cruisers and destroyers, were also badly damaged. Among those killed were 2,335 servicemen and 68 civilians. The wounded numbered 1178.

The USS Arizona was dealt the worst blow of the attack. A 1760-pound bomb struck it, and the ammunition on board exploded, killing 1177 servicemen. Today, a memorial spans the sunken remains of the Arizona, dedicated to the memory of all those lost in the bombing.

A Price Too High

The young people whose lives were snuffed out like a candle flame in a strong wind are tragedy enough. But the real tragedy of Pearl Harbor lies not only in their deaths. The tragedy was not only in the ships which were sunk or seriously damaged. It was not in the 350 planes damaged or destroyed. That is too simplistic. The real tragedy lies in the error of ignoring the warnings.

Failing to heed warnings of imminent peril is a foolish practice. Thomas Jefferson said, “The price of freedom is eternal vigilance.”

Obviously, the only alternate, conceivable purpose for Pearl Harbor was to absorb the first blow which would unite the people and ultimately deliver the total power of the nation upon the enemy. Perhaps that was a luxury America felt it could afford at the time.

In this nuclear age, however, that price would be beyond imagination.

And yet, our mentality has not changed. We continue to ignore warnings of impending national calamity. We shrug our shoulders at a diminished national power. We continue to spend future wealth as if there was no tomorrow. We minimize the importance of morality and instead become more and more self-indulgent. We underrate the importance of character in ourselves and in our leaders. We have forgotten what Teddy Roosevelt understood: “Americanism is a question of principle, of idealism, of character. It is not a matter of birthplace.” We have ignored President Calvin Coolidge’s warning: “Character is the only secure foundation of the state.”

When a nation, rampant with gross immorality and self-indulgence, continues in the habit of ignoring warnings, future disasters will completely overshadow the losses of Pearl Harbor.

To escape destruction in a world dead-set on annihilation, we must heed the warnings—not ignore them! We must listen to the watchman and be ever vigilant, or we will lose more than freedom—we will inherit destruction.

Are we a wise and brave nation? Do the words of our anthem still ring true: “And this be our motto: ‘In God is our trust!’/And the star-spangled banner in triumph doth wave,/O’er the land of the free, and the home of the brave!”

The answer to that question will rest in the determination to change our course. If we do not accomplish that, we will be the victims of a tragedy much greater than Pearl Harbor.