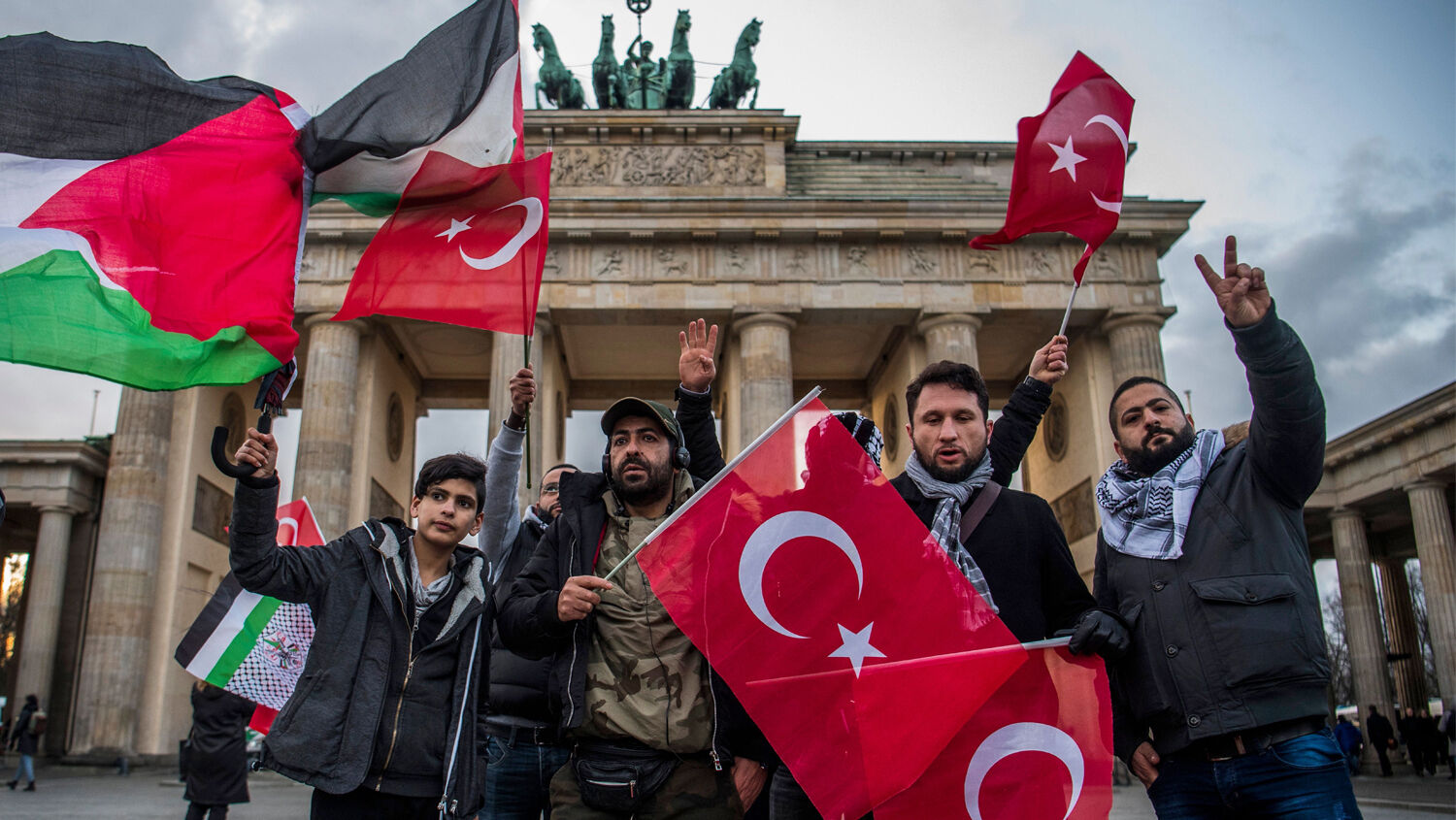 Demonstrators wave Palestinian and Turkish flags in front of the Brandenburg Gate, next to the US embassy in Berlin on December 8, 2017, following US President Donald Trump’s decision to recognise Jerusalem as the capital of the Israeli state.
JOHN MACDOUGALL/AFP/Getty Images

Anti-Semitism is rising significantly in Germany.

Thousands of people of mostly Arab origin demonstrated in Berlin against United States President Donald Trump’s decision to recognize Jerusalem as the capital of Israel. What was announced as a peaceful weekend protest beginning on December 8 eventually revealed the deep underlying hatred Muslim immigrants have for Israel. German authorities condemned the protest, but the same hatred is surging among traditional German citizens, its media and politicians.

On Friday, December 8, hundreds of people erupted in protest in front of the American Embassy in Berlin. The call for a “Day of Rage” was accompanied by the burning of self-made Israeli flags and shouts of “Down, Down Israel.” Around 2,500 people demonstrated in Berlin that Sunday, and protests continued till Tuesday.

In the following days, German media and politicians have largely criticized the protests. “We are ashamed to see such open hatred toward Jews expressed on the streets of Germany,” said federal government spokesperson Steffen Seibert. “Our laws on freedom of expression and assembly guarantee everyone a right to peaceful protest, but this right is no free pass for anti-Semitic atrocities, for incitement and violence.”

Christian Democratic Union politician Jens Spahn condemned the demonstrations in Berlin sharply on Twitter: “Due to misunderstood tolerance, we’ve been shrugging and looking at imported anti-Semitism for too long” (Trumpet translation throughout).

“In the first decades of the Federal Republic, there was above all the so-called secondary anti-Semitism, for example the trivialization or the denial of the Holocaust,” Jensen said. “It continues to exist, but a little less often. Instead, Israeli-related anti-Semitism has increased in recent years—in the entire German population.” While hatred was previously expressed against the Jewish people, it now manifests itself as hatred against the Jewish state—called Israel today.

Jensen explained that Germany currently zeroes in on migrants from Muslim countries in the anti-Semitism debate, but hatred toward Israel is surging among Germans themselves. The Interior Ministry recorded 1,468 anti-Semitic offenses, including 64 violent crimes. According to the ministry, 94 percent of the cases were based on right-wing extremist motives. And even though the refugee crisis seems to have ended, asylum camps are still attacked almost on a daily basis.

While the media is quick to condemn the Muslim protests, they in fact prove their own disdain toward Israel in their articles. Thus they themselves contribute to the surge of Israel-related anti-Semitism. On December 12, Bild exposed some of the hypocrisy. For example, when writing about a Palestinian terrorist attack, Spiegel Online ran the headline: “Palestinians Die During Knife Attacks on Israelis.” Actually, the knife-wielding terrorists were shot dead during an attempted attack—which is different from the impression given by the title. The German media portrays Israel as the offender and the Palestinians as the victim. Bild commented:

During the Second Intifada from 2000 to 2005, around 1,000 Israelis died in suicide bomb attacks. But Tagesschau provided a different definition: It was a “rebellion … against the Israeli occupying power.” Do journalists really have to adopt the vocabulary that terrorists choose for their actions?

The democratic Israel is happily equated with the radical Islamic Hamas. Spiegel author Jakob Augstein sees Islamist fundamentalists and devout Jews as the same evil—but holding different names. Both groups are “carved from the same wood.” However, not a single case is known in which a believing Jew blew himself up in a full Palestinian café.

Clearly, not only do the 1,468 anti-Semitic recorded offenses prove Germany’s disdain for Israel, but the German media does as well. On the same day, Bild published another article proving that although many believe anti-Semitism is a thing of the past, in actuality, it “is a terrible [part of] everyday life for many people.”

When more closely examined, German anti-Israel slogans are in fact not much different from that of their Muslim counterparts. Both blame Israel as the core problem of violence in the Middle East. “Memories of dark times awaken when Jews are blamed for the evil of the world,” Bild concluded.

While many ideologies separate Germany from the Arab world, the Bible prophesies of a common alliance between Germany and a few moderate Arab nations. Much has already been done to forge this alliance that rises as a counterbalance to Iran and its allies (you can read more on this in our trend section “Germany Allying With Arab Nations”). A prophecy in Psalm 83, however, shows that this alliance will also turn against the modern descendants of Israel. The alliance has two purposes: first, to defeat Iran and radical Islam; second, to eliminate Israel from the map. Trumpet editor in chief Gerald Flurry explained:

“Keep not thou silence, O God: hold not thy peace, and be not still, O God. For, lo, thine enemies make a tumult: and they that hate thee have lifted up the head. They have taken crafty counsel against thy people [Israel], and consulted against thy hidden [or sheltered] ones” (Psalm 83:1-3).

These enemies are conspiring against biblical Israel. (Our book The United States and Britain in Prophecy explains who Israel is. All of our literature is free.) …

“They have said, Come, and let us cut them off from being a nation; that the name of Israel may be no more in remembrance” (Psalm 83:4).

Germany is eager to play a more prominent role in the peace process. Israel already trusts Germany, relying on it for significant military equipment, for example. The current widespread anti-Semitism, however, reveals that Germany is not a trustworthy ally.

Bible prophecy gives the same warning—only in much stronger terms. Passages like Hosea 5 give stark warnings about what will come from Israel’s trust in Germany. For more about this, read our article “Can Israel Trust Germany?”