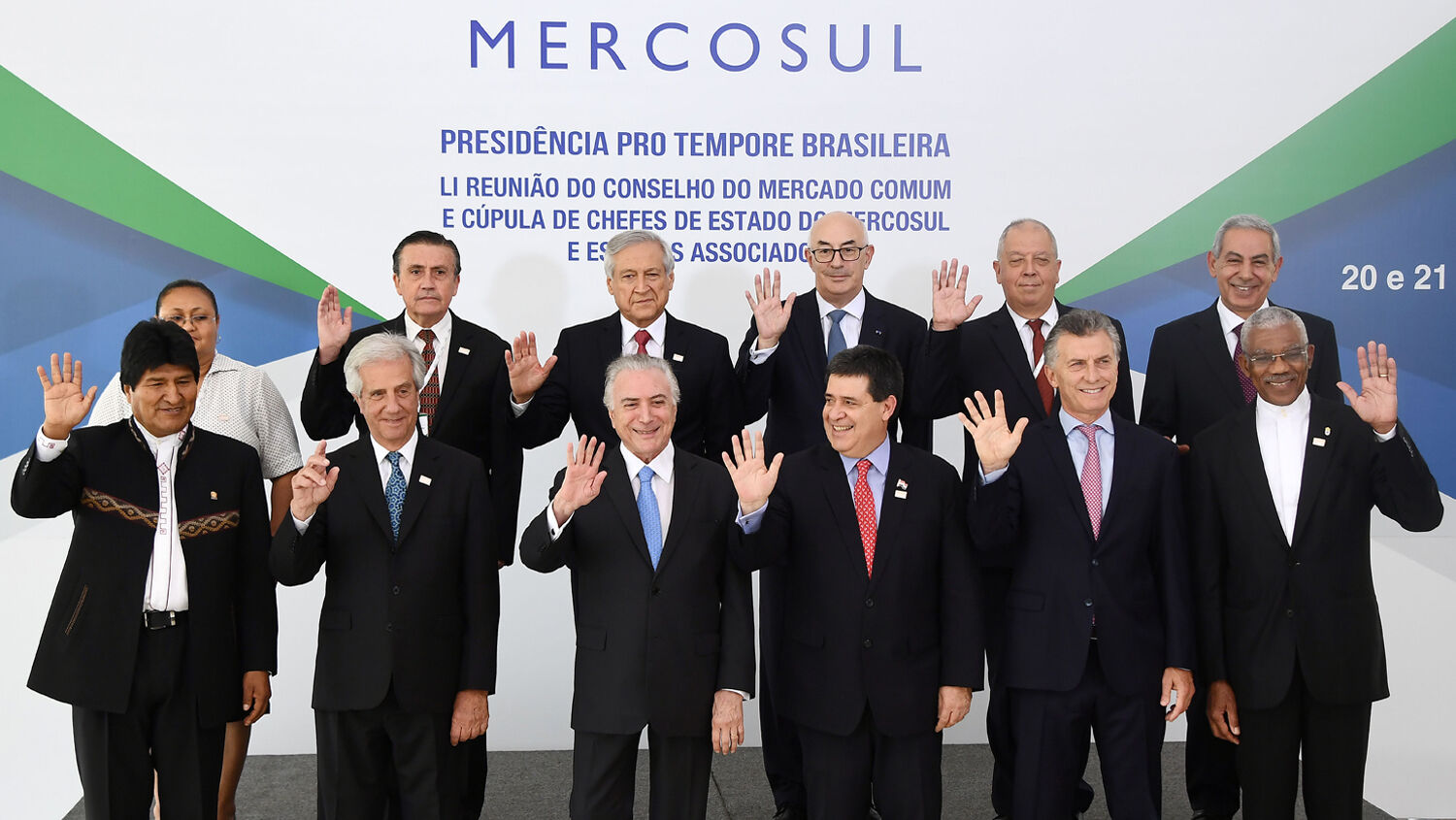 Heads of State of Mercosur and Associated States meet in Brazil on December 21, 2017.
EVARISTO SA/AFP/Getty Images

European and South American negotiators are set to make one of the largest trade deals in history. What will this mean for the relationship between these two political blocs?

Negotiators from the European Union and the mercosur customs union were set to gather on November 29 to conclude a deal that was seven years in the making. The deal seemed close. However, after dissent emerged from European agricultural producers, the deal has been pushed back until next year.

mercosur is an economic and political bloc founded by Argentina, Brazil, Paraguay and Uruguay in 1991 through the drafting of the Treaty of Asunción. It was formed to foster diplomatic relations in the region and increase trade. However, due to infighting, the group has failed to live up to its original goals.

Beginning in May 2010, the EU began negotiations with mercosur to establish a free-trade agreement. While some headway was initially made toward a deal, plans were put on hold after the negotiations ran into several speed bumps.

Fast-forward seven years, and the two parties rejoined the discussion eager to announce an agreement by the end of the year. Talks began on November 29 and lasted until December 8. The two sides traded notes on how much they were willing to concede and mercosur is awaiting a response to its proposals. If the EU finds them acceptable, a deal should be struck early next year, according to European Trade Commissioner Cecilia Malmström.

In an interview with Bloomberg News on November 7, Argentine President Mauricio Macri commented that the next generation of Argentines longs to be part of the world community. He indicated that heavy taxes on international trade are causing the members of mercosur to inch toward poverty. If a deal with the EU trade bloc goes through, it will open up access for increased trade revenue.

The EU will also profit greatly from a free-trade agreement with mercosur. Trade statistics show that the EU exported over €46 billion (us$53.4 billion) to the South American bloc in 2015, and trade is set to grow significantly if a deal can be agreed upon.

But as Forbes stated, “[T]he relationship goes deeper than trade—the EU is the region’s largest foreign investor, rising from €130 billion ($154.3 billion) in 2000 to nearly €390 billion ($462.7 billion) in 2014.” A lot of European money is tied up in South American assets. As South America emerges from its economic isolation, it is seeking to bind itself even more strongly to the powerful EU for financial security. And the EU is happy to oblige.

Of particular importance in this relationship is Germany. There is a long history between Germany and South America, stretching back to the 1530s. Even before Germany had solidified into a single nation, the Germanic people helped pave the way for European colonization of South America.

For many years, the Trumpet has reported on this growing international relationship and the potential for an impending trade war at North America’s expense.

Herbert Armstrong long prophesied, and we expect, the alliance between Europe and South America to grow extremely strong. The most significant factors that will cement this connection are religion and language: Roman Catholicism is the dominant religion of Latin America; and next to English, Spanish is the second-most spoken language in the world. But it will not be a union of equals: The Latin American countries will become vassal states to Europe!

With a German-led Europe (the king of the north) possessing great maritime power, North America will be surrounded on the east by Europe and on the south by Latin America. The Bible contains many prophecies of that European power attacking America—and many other prophecies of America being besieged.

Whether the proposed free-trade agreement goes through or not, we expect the nations of mercosur and the German-led EU to continue to strengthen their relationship.