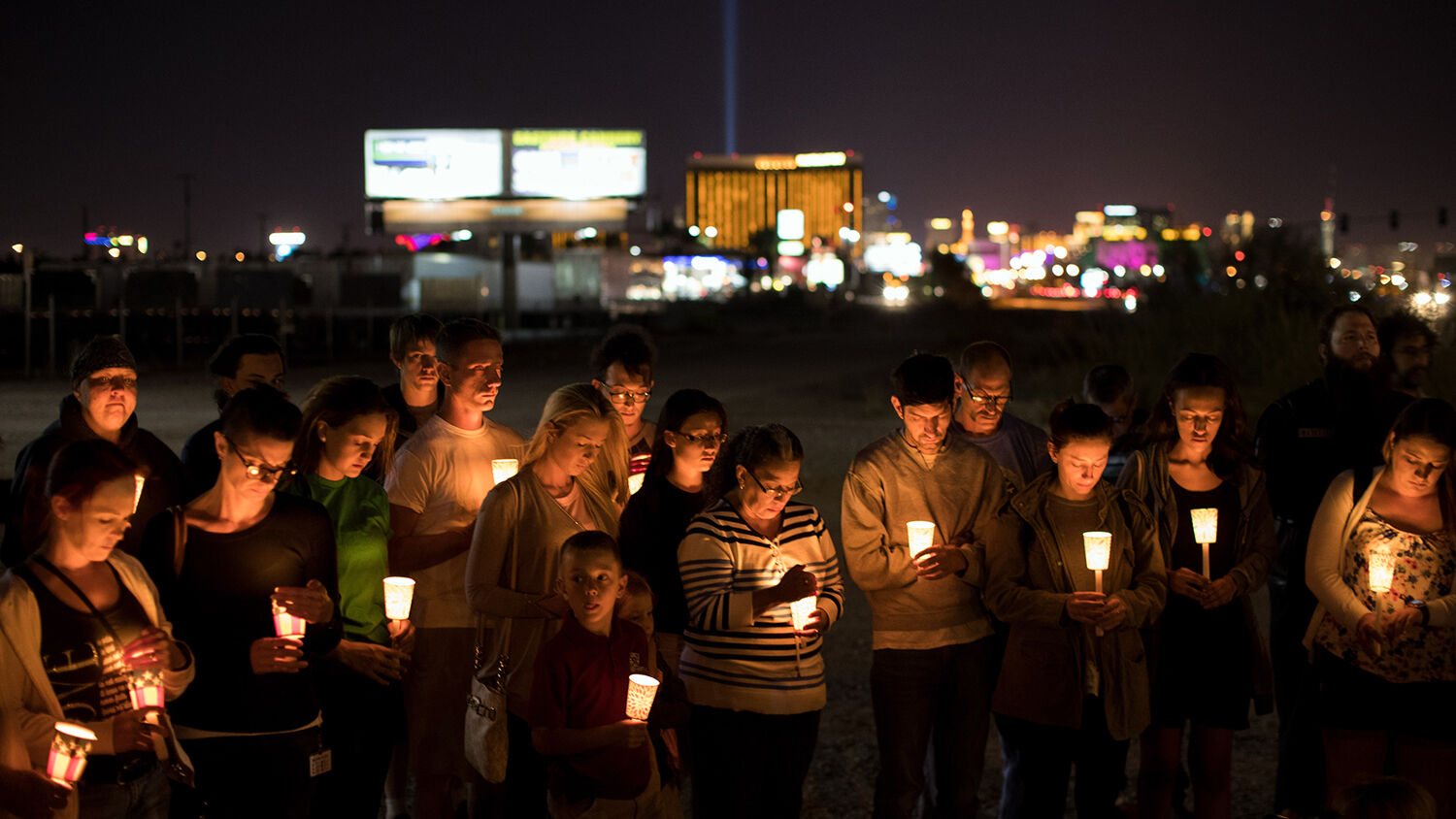 Mourners attend a candlelight vigil for the victims of the October 3 shooting in Las Vegas, Nevada. The gunman killed 58 people and injured over 500 after he opened fire on a large crowd.
Drew Angerer/Getty Images

In the span of 35 days, the United States has suffered two of the five deadliest mass shootings in its history.

The United States is experiencing its worst level of mass shootings in history. Over the last two months, 58 were massacred from the 32nd floor of a Las Vegas hotel and 26 were slaughtered at a church service in Sutherland Springs, Texas. In a span of 35 days, those events became two of the five deadliest mass shootings in U.S. history.

At the same time, citizens who live in the United States of America comprise the most materially wealthy humans in history. Blessed with the perfect combination of fertile soils, river systems, farmland and protection from enemies, America has been able to export wealth and luxury to the world. An American living below the poverty line has access to education, safety, technology, opportunity and wealth that the upper classes of hundreds of years previous could only dream of.

And yet no year in history has been as deadly for mass shootings as 2017. Why this paradox? Surely, this is a question for the modern age: Why does mankind remain unhappy and murderous when it has every material blessing in its grasp?

In the United States’ 30 largest cities, murder rates increased by double digits in 2016; although, they are still nowhere near the rate of the 1990s, when crack-cocaine-fueled murders ripped through the nation. There are horror stories coming from cities like Chicago, Illinois, and Baltimore, Maryland, where the murder rate has nearly doubled in recent years.

In Baltimore, it has come to a point where citizens are trying to organize “Ceasefire” events, where nobody is murdered for 72 hours. The city couldn’t make it through that period. As the Guardian reported, “[G]unfire shattered the first Ceasefire event 40 hours into it, fatally wounding a 24-year-old man and, a few hours later, a 37-year-old man.”

That Guardian reporter interviewed Warren Brown, a former Baltimore prosecutor, about how to end the violence:

“I just don’t know how to end this carnage, and neither does anybody else. Not the mayor, not the police commissioner, not the state’s attorney,” he says. “We need a Marshall plan for crime with massive amounts of money and commitment from every government agency, the police, the schools, the medical institutions, the corporations, the foundations; and it’s not gonna happen.”

Brown’s statement is perhaps one of the most honest you’ll hear coming from mass media on the problem of mass violence. “I don’t know how to end this carnage, and neither does anybody else.” It’s true—no man has been able to find a solution to mass shootings. No man has been able to develop a policy that will end crime and violence. If criminals don’t have guns, they’ll use explosives, like the Oklahoma City bombing two decades ago. If they don’t have bombs, they’ll use trucks, like the Bastille Day attack in Nice, France. The solution to this problem is out of man’s reach. If man could solve it, the hundreds of years it has spent searching in philosophy, religion and science would have done so by now. It is a spiritual problem—and the solution comes from above.

Man doesn’t know how to end mass shootings and violence because it doesn’t know why they happen in the first place. The pastors and evangelists from traditional Christianity balk at the notion of having to explain why such tragedies occur. Consoling and comforting is one thing; explaining causes is another.

Trumpet executive editor Stephen Flurry used his Trumpet Brief on Monday to answer the question of why. The answer lies in knowing who the god of this world really is, and what Herbert W. Armstrong called man’s 6,000-year “lesson” in aversion therapy. Here is the concluding paragraph:

You can’t explain what happened in Sutherland Springs with the traditional religious teachings. But if you believe what the Bible says, you know exactly why such abominable horror has happened and will happen. And you have hope. Because you know that this is a lesson in aversion therapy that teaches us to turn to God. Because you know that those 26 people, including that 17-month-old baby boy, will be resurrected in the future. Because he will be resurrected into a world where people won’t choose the “freedom” of living the way of the knowledge of good and evil under Satan the devil. It will have been a very painful lesson, but we will have finally learned it.

You can click here to read the rest of Stephen Flurry’s article “Why Mass Shootings?” and here to sign up for the Trumpet Brief, a newsletter which explains the reasons why each weekday.