A new financial instrument gives oil-exporting nations their long-sought alternative to the petrodollar. 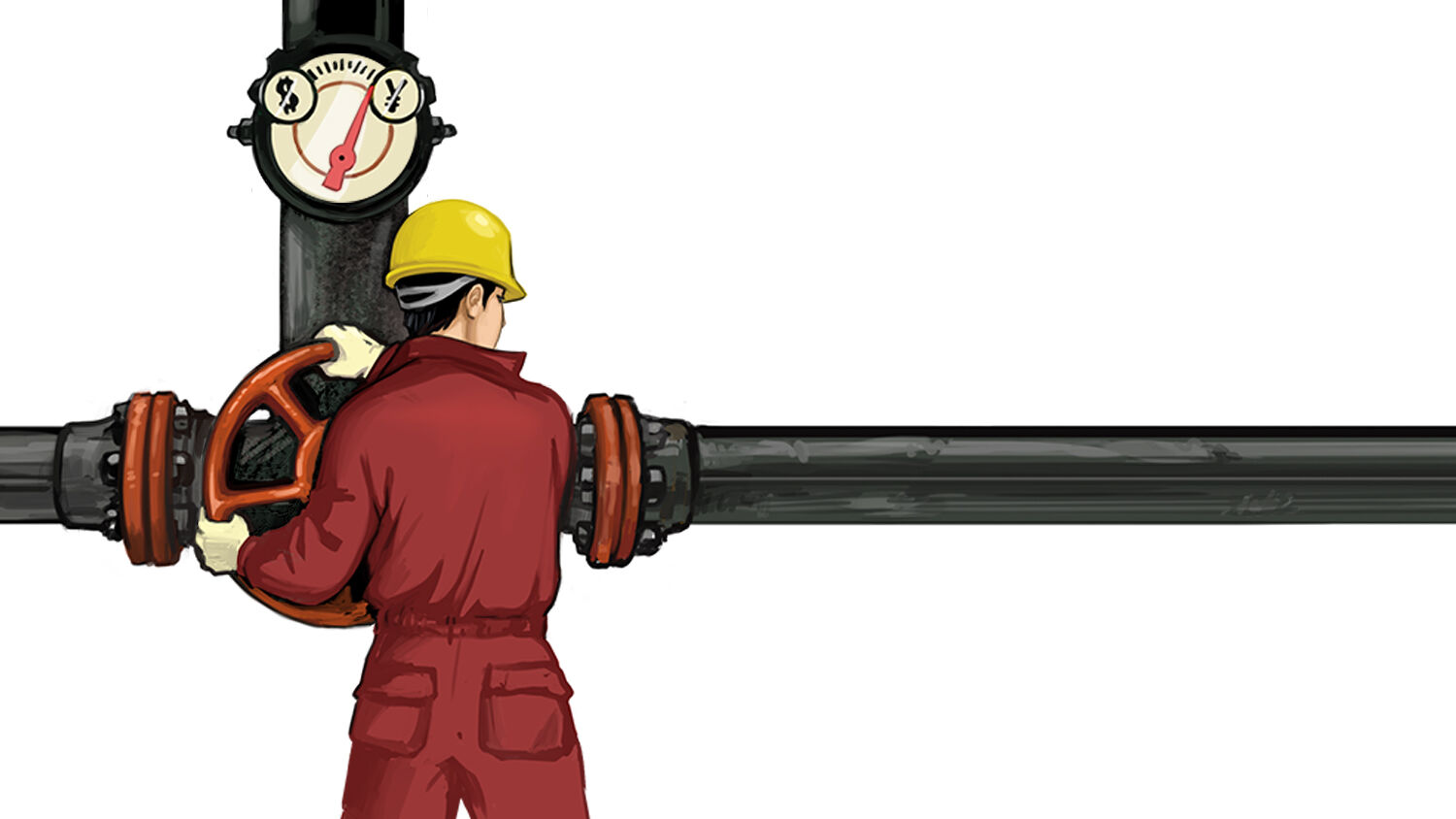 A new financial instrument gives oil-exporting nations their long-sought alternative to the petrodollar.

China will soon introduce a crude oil futures contract denominated in yuan and convertible into gold, the Nikkei Asian Review reported on September 1. Analysts say that since China is the world’s largest oil importer, the move could deal a major blow to the global influence of the United States dollar.

The contract will allow oil-exporting nations such as Russia, Iran and Venezuela to conduct sales in yuan, instead of in U.S. dollars, and to then change the yuan into gold on both the Hong Kong and Shanghai exchanges. It will also allow these countries, which often fall afoul of American foreign policy, to circumvent sanctions based on the U.S. dollar.

The Chinese government has been developing the gold-backed futures contract for years, and Oilprice.com reports that it is expected to launch this year. It will be China’s first commodities futures contract available to foreign entities. Analysts expect many oil-exporting nations and firms to find it appealing.

Leaders of oil-exporting nations, such as Russia, Iran and Venezuela, have often expressed the desire to bypass the U.S. dollar. But avoiding the greenback has proved challenging, largely due to the size of America’s economy, the dominance of U.S. markets, and the momentum of long-standing global finance practices. As much as these nations would like to close the curtain on the U.S.-dominated economic order, the Chinese yuan and other currencies have not garnered enough international confidence to be viewed as trustworthy alternatives.

But China’s new futures contract allays those fears by making the yuan fully convertible into gold.

“It’s a transfer of holding their assets in black liquid to yellow metal,” said Grant Williams, a finance expert who advises Vulpes Investment Management. “It’s a strategic move swapping oil for gold, rather than for U.S. Treasuries, which can be printed out of thin air” (ibid).

Alasdair Macleod of Goldmoney Inc. told the NikkeiAsian Review that the gold conversion option is “likely to appeal to oil producers that prefer to avoid using dollars and are not ready to accept that being paid in yuan for oil sales to China is a good idea either” (ibid).

The Asia Times said, “The new triad of oil, yuan and gold is actually a win-win-win” for China and the oil-exporting nations. “No problem at all if energy providers prefer to be paid in physical gold instead of yuan. The key message is the U.S. dollar being bypassed” (September 5).

The bypassing of the U.S. dollar would be a win for China and many oil exporters. For the American economy, it could represent a catastrophic loss.

Black Eyes for the Greenback

The dollar has dominated international markets since the end of World War ii in 1945. Since 1973, the Organization of the Petroleum Exporting Countries (opec) has priced, quoted, traded and settled oil sales in U.S. dollars, also known as “petrodollars.” The widespread conversion of these petrodollars into U.S. Treasuries has been a vital artery for the American economy and has helped finance the nation’s vast deficit expenditures. The Chinese contract could dry up the flow through that artery, withering or possibly even severing it.

“In addition to reducing a major source of funding for the U.S. government’s enormous deficit spending, the introduction of a gold-backed yuan oil futures contract is an important step toward removing the dollar as the world’s reserve currency,” wrote Investment Research Dynamics. “More significantly, it reintroduces gold into the global monetary system” (September 3).

After such a reintroduction of the precious metal into the world system, the anemia of America’s fiat currency would contrast starkly with the ruddy currencies of economies that are healthier and/or backed by something besides consumer confidence. This would rapidly fade the dollar’s global reserve currency status.

Bolt From the Blue?

The appeal of the new Chinese futures contract may go beyond the usual suspects on the list of American adversaries.

Back in July, the Trumpet called attention to reports saying that China would become the main investor in the forthcoming initial public offering of Aramco, Saudi Arabia’s state-owned oil company. Aramco will be worth about $2 trillion; it will be the highest-valued firm on the globe.

If this sale goes through as planned, Macleod said the Chinese would be in a position to switch the pricing of Saudi oil from dollars to yuan. “[I]f China can tie in Aramco, with Russia, Iran et al., she will have a degree of influence over nearly 40 percent of global production, and will be able to progress her desire to exclude dollars for yuan,” Macleod said (Nikkei Asian Review, op cit).

Such a dramatic and unexpected shift by Riyadh would also erode the very foundations of the U.S.-Saudi Arabia relationship.

Red Flags for the Status Quo

Whether the Saudis sign up for the Chinese futures contract or not, the development is expected to be a game changer for the global oil industry.

James Corbett, founder of the Corbett Report, called the development “earthshaking” and said it is “potentially ominous for what it portends for the near future.”

Corbett said: “If this really is the shot across the bow, then those kinds of shots can turn into real shots very quickly. … Over the course of the next year, I think we are going to be seeing some pretty tectonic shifts taking place monetarily, geopolitically and, as a result, potentially militarily. And, well, that could kick off any day presumably” (September 6).

For five decades, the Trumpet and our forerunner magazine the Plain Truth have warned that a catastrophic financial crisis centered in the U.S. will send deep reverberations across the planet and help recolor the entire geopolitical landscape.

In 1968, Plain Truth editor in chief Herbert W. Armstrong discussed the dire economic conditions that would afflict America in the end time. “If the dollar is devalued, inflation will almost surely result,” he wrote, “and eventual economic collapse for the United States” (co-worker letter, March 26, 1968).

Mr. Armstrong’s forecast was based on Bible prophecies, such as those recorded in Leviticus 26 and Deuteronomy 28, which show that if the people of America rejected God, He would bring the nation to ruin: “Those of you who truly believe the prophecies of your Bible know such economic collapse is prophesied to happen!” Mr. Armstrong continued. “We have shown how God prophesied a virtual trade war will get underway against the United States and Britain—and how our national economics will falter, and then collapse!”

Trumpet editor in chief Gerald Flurry has also written in his booklet Isaiah’s End-Time Vision that Asian nations will work in conjunction with European states to block the U.S. and Britain out of world trade. “[W]e believe there may be a brief alliance between the German-led Holy Roman Empire and certain Asian powers (Russia, China, Japan—the kings of the east),” he writes.

In Ezekiel: The End-Time Prophet, Mr. Flurry offers more vivid details about this prophesied siege against the English-speaking countries: “The United States and Britain are going to be left out in the cold as two gigantic trade blocs, Europe and Asia, mesh together and begin calling the shots in world commerce. These nations … are going to be literally besieged—economically frozen out of world trade!”

This prophecy is based on specific Bible passages in Ezekiel 5 and 27, Isaiah 22 and 23 and Revelation 18, and is thoroughly explained in Mr. Flurry’s free books Isaiah’s End-Time Vision and Ezekiel: The End-Time Prophet.

If China’s new oil futures contract succeeds in pushing oil-exporting nations away from the dollar and toward the gold-backed yuan option—as numerous experts believe it is certain to do—this development will precipitate the dollar’s demise and set the international stage for this prophesied siege to take place.

Bible prophecy makes clear that this will lead immediately into a time of unprecedented destruction and devastation for the U.S., Britain and Israel, and that those flames will then spread to engulf the whole world.

But there is some spectacularly good news connected to this looming crisis.

Mankind will survive. Jesus Christ will interrupt that global conflict and usher in a golden age that will saturate all countries of the world with stability, peace and prosperity. He was born to be King of kings in that future world government (Luke 1:31-33; John 18:36-37; Revelation 19:11-16). And its establishment is now just on the horizon.