A spark in one Latin American nation could set off an explosion that engulfs the entire region. 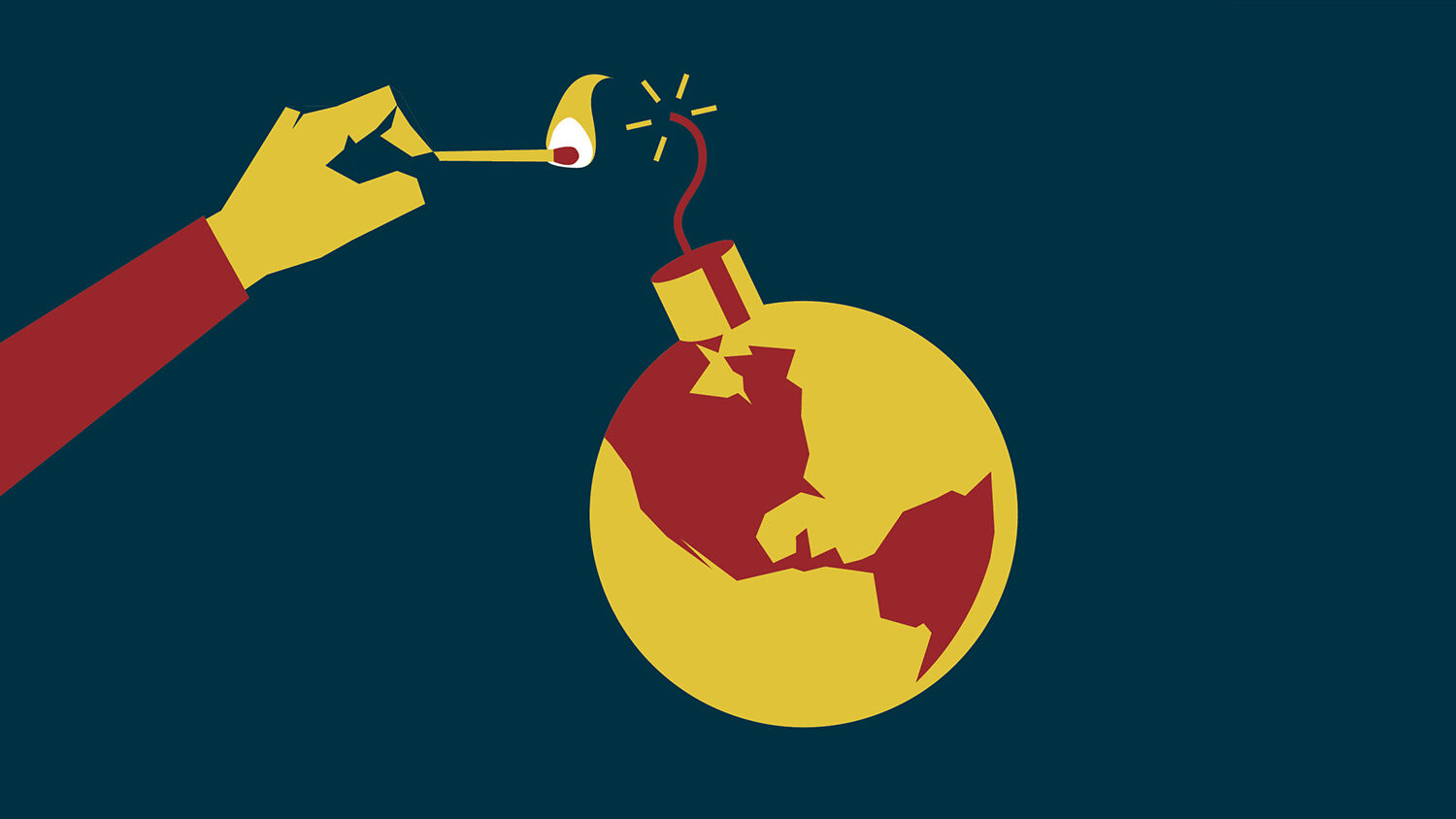 A spark in one Latin American nation could set off an explosion that engulfs the entire region.

In international news, Latin America and the Caribbean are often ignored. Yet events in these regions are important, not only for their own sake, but also for how they can affect the rest of the world.

The 20 Spanish- and Portuguese- speaking countries south of the Rio Grande are home to approximately 626 million people. They account for 7 percent of the world’s gross domestic product, 15 percent of raw material exports, and 20 percent of oil reserves. One fifth of all United States crude oil imports come from Latin America, making this region more important to U.S. energy security than the entire Middle East.

Acute poverty, government instability and societal breakdown are churning inside Latin America—crises so potent that they could cause a meltdown equivalent to the Arab Spring.

The violence that Latin Americans are suffering can also spread. An estimated 500,000 Latin American refugees already cross illegally into the United States each year. The spread of refugees, the power of the cartels, and the insatiable demand in the U.S. for illegal drugs means that the instability of Latin American nations could extend throughout the Western Hemisphere.

As astounding as it may sound, this situation was actually prophesied in your Bible. Jesus Christ forecast that “great tribulation, such as was not since the beginning of the world” will encompass all nations, including those in Latin America (Matthew 24:21).

In the Old Testament, the same God told the ancestors of the Anglo-Americans that they would be blessed for obeying His laws and cursed for disobeying. In Deuteronomy 28:43 and 52, He specified that one curse for disobedience would be that “[t]he sojourner who is among you shall mount above you higher and higher; and you shall come down lower and lower. … They shall besiege you in all your towns, until your high and fortified walls, in which you trusted, come down throughout all your land; and they shall besiege you in all your towns throughout all your land, which the Lord your God has given you” (Revised Standard Version).

Trumpet editor in chief Gerald Flurry wrote in “Where America’s Race Riots Are Leading” (theTrumpet.com/12158) that this reference to America’s “high and fenced walls” falling refers to illegal immigrants streaming into the U.S. (Trumpet, November-December 2014).

People across the Western Hemisphere have turned away from God, and violence is escalating. The Bible prophesies that God will allow a final resurrection of the Holy Roman Empire to conquer America as punishment for its sins. This empire is termed “holy” because it is guided by a religious entity, the Roman Catholic Church. The Catholic Church will almost certainly use its influence in Latin America to bind this region to Europe.

Bible prophecy strongly indicates that Europe will edge out U.S. influence from Latin America. As crises intensify, Latin Americans will cry out to Catholic Europe for help, willingly subjecting themselves to the Holy Roman Empire. This empire will then use its Latin allies to lay siege to Canada and the U.S. The Bible says God will allow this destruction in order to fulfill His purpose. He will precisely measure out this punishment in order to bring Americans of all ethnic backgrounds to a point where they will heed Him and embrace a way of life that eliminates drug addiction, organized crime, corrupt government, crushing poverty, and tragic death.

About 12,500 people were murdered in Mexico during the first half of 2017—more than 2,000 victims per month. The International Institute for Strategic Studies says this makes Mexico more violent than the war zones in Afghanistan, Iraq and Yemen. If this rate of carnage continues, Mexico will suffer its bloodiest year in at least two decades.

The arrest of the notorious drug lord Joaquín “El Chapo” Guzmán in 2014 was a major victory for the Mexican government, yet it also created a power vacuum in Guzmán’s Sinaloa Cartel, which had been the world’s most powerful drug trafficking organization for 27 years. Now fragments of Sinaloa and other cartels are fighting turf wars, contributing to a 23 percent jump in Mexico’s homicide rate from 2015—to 21 murders per 100,000 people in 2017.

An estimated 55 percent of all Mexican homicides (and 7 percent of all U.S. homicides) are related to drug trafficking. The drug cartels reportedly field some 100,000 foot soldiers. The Mexican government is now in its 11th year of war against the cartels, it has deployed its military to support the overmatched police, and the U.S. has provided a steady stream of military equipment. Yet cartels continue to grow more powerful and more violent. Why? Because roughly 10 percent of U.S. residents over age 12 are addicted to illegal drugs. Ultimately, it is America’s 24.6 million drug users who are fueling a $100 billion-per-year industry, causing more than 21,000 overdose deaths and 12,000 drug-related homicides every year.

Gang violence in El Salvador, Guatemala and Honduras is making life in Central America unbearable and forcing thousands of people to flee.

Since gang violence began escalating in 2013, the murder rate in these small Central American nations has soared. El Salvador became the murder capital of the world in 2015, when 108 out of every 100,000 people in the country were murdered (22 times the homicide rate in the United States). Honduras and Guatemala also have extremely high homicide rates—64 per 100,000 and 31 per 100,000 respectively.

After a two-year truce between El Salvador’s two most powerful street gangs crumbled in 2014, the death toll jumped 70 percent from the previous year. As El Salvador, Guatemala and Honduras crack down on gang warfare, the violence is intensifying and tens of thousands of people are fleeing every year from forced gang recruitment, violence and the threat of death. An estimated 10 percent of the region’s 30 million residents have already fled. Most travel north seeking sanctuary. In 2015, more than 60,000 unaccompanied child migrants reached the United States’ southern border.Brazil is relatively stable compared to the cartel-dominated war zones in Mexico and Central America. But its government is vulnerable for other reasons. One year ago, Brazilian President Dilma Rousseff was ousted in a 61-20 impeachment vote. Now the new president, Michel Temer, has been accused of corruption, bid rigging and money laundering using other high-ranking members of the government.

The actions of the Temer administration have already provoked a summer of unrest. In April, protesters set buses on fire, blocked roads and clashed with police during a labor union strike against government austerity measures. In May, thousands of protesters demanded Temer’s resignation after a leaked conversation showed that he was allegedly involved in a hush-money scandal. A small group of these protesters set fire to an Agriculture Ministry building in the capital. Temer deployed soldiers onto the streets to restore order. In June, demonstrators shut down bus services in Brasília and blocked roads with burning tires in many other cities.

Meanwhile, about 10,000 Venezuelan refugees are streaming into Brazil each month in search of food and medicine, and economic pressures on the nation are intensifying.

Cuba’s geographic location has made it a strategically important island since the 1500s. It has served as an important asset to Spain, to the Holy Roman Empire and, more recently, to Communists and terrorists.

Since 1959, Cubans have been held in the grip of the despotic Communist Castro regime, which, allied with the Soviet Union and other enemies of the West, became one of four state sponsors of terrorism and attempted in 1962 to install Soviet supersonic nuclear ballistic missiles just 90 miles from the U.S. mainland.

In 2013, Panamanian authorities seized a ship carrying “undeclared weapons of war” from Cuba to the North Korean dictatorship of Kim Jong-un. Panamanian President Ricardo Martinelli said the cargo included missiles and nonconventional arms. The United Nations reported that there was a “planned strategy to conceal the existence and nature of the cargo.” Despite this incident and Cuba’s ongoing aggressive rhetoric against the United States, the Obama administration removed Cuba from its list of state sponsors of terrorism in May 2015.

Since then, leaked intelligence from Hillary Clinton’s personal e-mail server shows that Hezbollah, a Lebanese terrorist proxy of Iran, has been cooperating with the Cuban government since 2011.

Some U.S. lawmakers are concerned that Cuba is still passing intelligence to Hezbollah and Iran to use against the U.S. “The Castro regime has shown no inclination to end its anti-American activities, including espionage,” Republican Rep. Mario Diaz-Balart of Florida told the Washington Free Beacon. “The Castro regime in August and September 2016 deepened ties with Iran through high-level visits, and there are reports that Iran-backed terrorist group Hezbollah has established a base in Cuba” (Oct. 27, 2016).

In May, the Wall Street Journal reported that Cuba has sent dozens of high-ranking officers and thousands of intelligence agents to Venezuela to monitor Venezuelan Army officers and prevent a military uprising that could overthrow communism and restore democracy.

Much of the current violence in Venezuela is aided and abetted by Cuba’s terrorist-sponsoring regime. Cuba is reemerging as a clear and present danger to peace and stability across the Western Hemisphere.

Following elections this past summer, Venezuela has been plagued by anti-government protests that have a real chance of plunging the country into civil war. Venezuelan President Nicolás Maduro held the elections to redraft the country’s constitution. His opponents say he is attempting to create a dictatorship.

Already suffering from a five-year economic crisis brought on by Venezuela’s socialist economic system, men, women and teenagers have protested in the streets. The government has responded with unusually harsh retribution, and many of Maduro’s political opponents are being arrested and beaten.

Since the beginning of the year, more than 120 people have been killed in clashes between police and protesters. The threat of famine adds to the desperation and the violence. Meanwhile, Venezuela’s average inflation rate over the past 12 months was 460 percent. Reports say that nine in ten households can’t afford proper nutrition.

If elements of the Venezuelan military decide to side with the protesters, a military coup is a real possibility. To prevent this scenario, Maduro has accepted dozens of Cuban intelligence officials to monitor Venezuelan Army officers. He has also started distributing weapons to civilian militias loyal to the government. United States security analysts, including Central Intelligence Agency Director Mike Pompeo, have warned that these weapons could easily end up in the hands of terrorist organizations and drug cartels, creating an “incredibly real and serious” danger to the region.

Venezuela’s socialist collapse has triggered a migrant crisis on the Colombia-Venezuela border. Colombian government records indicate that at least 153,000 Venezuelans have overstayed their 90-day tourism cards, and many of them must intend to remain in Colombia illegally or continue to Ecuador or Chile.

Many Venezuelans are illegally settling in the border city of Cúcuta to work in construction or housework. The PanAm Postreports that many Venezuelan students and professionals are working as street vendors there, trying to save enough money to migrate to Peru or Chile. Others are turning to smuggling and prostitution. The illegal trade of state-subsidized Venezuelan gasoline into Colombia is a booming business.

The Colombian governmentratified a peace deal in November 2016 to end 52 years of war with South America’s oldest leftist rebel group, the Revolutionary Armed Forces of Colombia (farc). The peace has been messy, and many now fear that the Venezuelan refugee crisis will open the door for other criminal groups to fill the vacuum left by farc, using drug trafficking and illegal mining to fund criminal operations.

The crisis unfolding in Venezuela will undoubtedly compound Colombia’s security challenges, potentially leading to a resurgence of drug cartel activity in the nation’s eastern provinces. Research assistance by Jack Wood