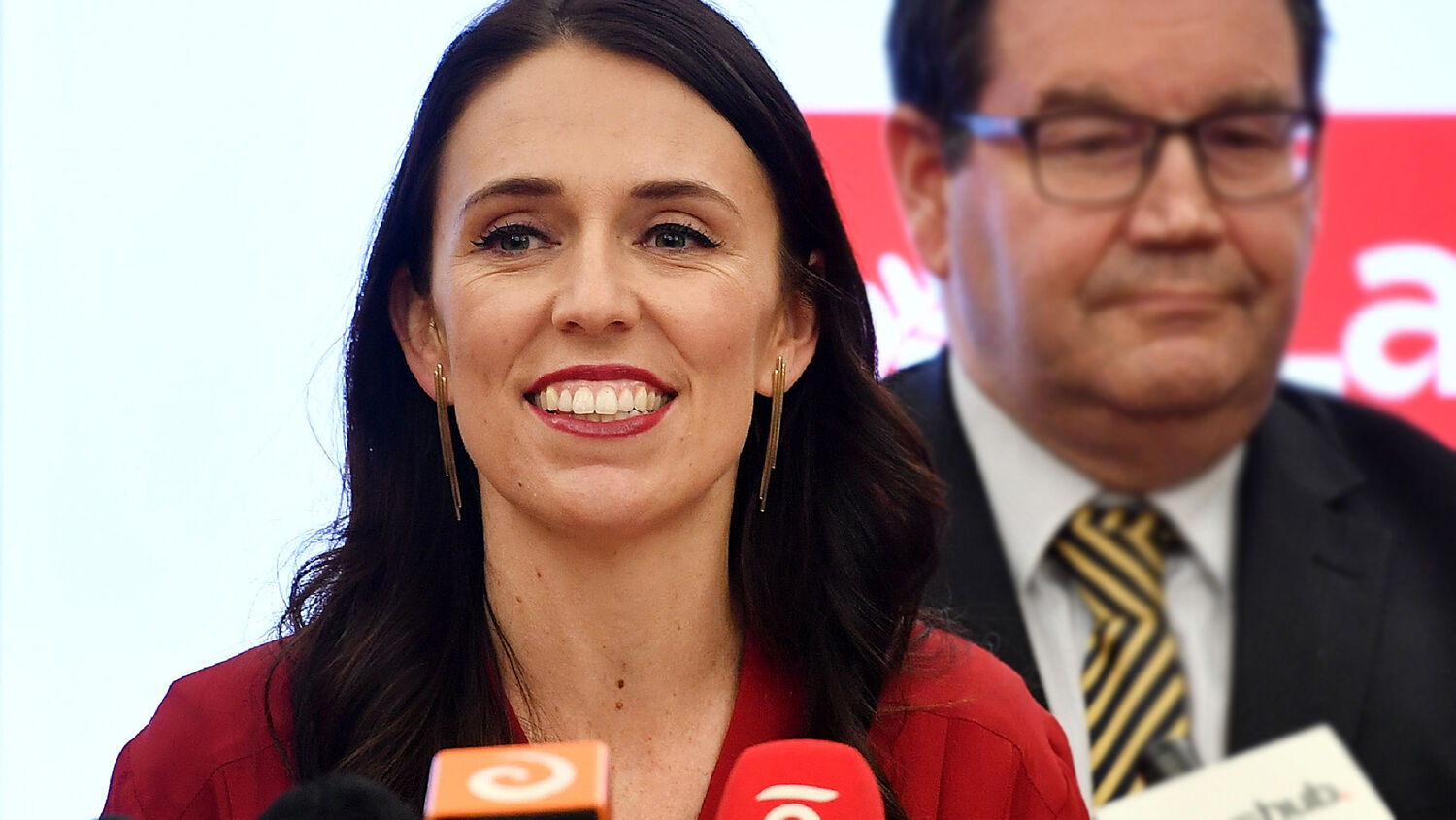 Leader of the Labour party Jacinda Ardern speaks at a press conference at Parliament in Wellington on October 19, 2017.
MARTY MELVILLE/AFP/Getty Images

Yesterday, New Zealand announced a new prime minister. The new nominee will be steering New Zealand in a different direction—and the significance goes beyond New Zealand’s coasts. This election portends a number of new developments: Consider a sharp deterioration in United States-New Zealand and United Kingdom-New Zealand relations, with a very possible separation from the British monarchy. Consider a sharp rise in abortions and national debt, as well as increased financial burden for the farming industry. These are not wild assumptions from a pro-National supporter (I do not support any New Zealand party); these are undisguised, clear developments that the country is steering toward under its new leadership.

New Zealand’s national elections had actually been concluded three weeks ago, with the conservative National Party winning by a good margin for a singular party. Nearly half of the public voted for outgoing Prime Minister Bill English’s National Party. However, a coalition was required, and for the past three weeks tensions have been high as the undecided New Zealand First party determined whether to back National or the left-wing Labour Party bloc. In a surprise announcement yesterday, it chose the latter, making Jacinda Ardern New Zealand’s new prime minister.

Jacinda Ardern is the world’s newest so-called “rock star” leader, and her “Jacindamania” effect has been likened to the rise of the United States’ Barack Obama and Canada’s Justin Trudeau. At 37, she is New Zealand’s second-youngest prime minister and its third female in the office. All this is quite impressive, considering she’s only led her Labour Party for 2½ months.

Ardern has made clear her political standing. A social democrat, she has been involved with the Labour Party from her teenage years and considers former Labour Prime Minister Helen Clark a “political hero.” She has been outspoken on several social issues, and from 2008 to 2010, she was president of the International Union of Socialist Youth. Here are some of the issues and topics that have come to the fore as a result of Ardern’s election.

Ardern is a staunch republican who wants to completely cut New Zealand’s ties with the British monarchy. She has expressed the desire to start a “national discussion” about establishing a republic. Her opinion of the monarchy appears to parallel that of Australian Prime Minister Malcolm Turnbull. Turnbull has said that after the current Queen of England’s reign ends, he plans to call for a decision on Australia’s status under the monarchy. Whatever Australia does in this regard, there is no doubt New Zealand will follow suit—if it doesn’t get to it first. Jacinda Ardern has not issued a similar time frame for a debate or perhaps referendum on becoming a republic. There is still some national attachment to the Queen; however, resentment toward a King Charles runs high, both in Australia and New Zealand. It is a similar story in Canada. We may see all three nations leave the Commonwealth in a few short years.

Jacinda Ardern was quick to express her disapproval of U.S. President Donald Trump’s election, tweeting in November 2016, “I thought I understood humanity.”

I’ve never really pretended to understand the quirks of other countries-even mine surprises me sometimes.But I thought I understood humanity

After Trump’s inauguration in January, Ardern joined in New Zealand’s retaliatory “Women’s March” (also called “Women Against Trump”), where she was a keynote speaker. Along with another demeaning Instagram post on Trump’s election, it doesn’t take much imagination to wonder how U.S.-New Zealand relations will play out in the future.

Ardern has been very much a liberal in support of several social issues. She is a staunch supporter of homosexual rights in New Zealand, contrary to her Mormon upbringing (she is currently agnostic). She has taken part in Gay Pride parades, last year featuring her own float for the parade. After New Zealand bishop Brian Tamaki blamed New Zealand’s recent disastrous earthquakes on homosexuality, Ardern called him out with an open letter, criticizing his closed-mindedness and making a sarcastic stab at members not paying enough tithes.

Ardern also has liberal views on abortion, which featured in her run for office. Abortion is still a crime in New Zealand, except for circumstances such as danger to the mother’s physical or mental health. As such, New Zealanders desiring an abortion simply travel to Australia to undergo the procedure. Ardern campaigned to reverse the criminality laws on abortion in the hope of making it convenient for women to abort while still at home in New Zealand. We’ll have to see how New Zealand’s laws will be modified to this effect. It’s inevitable that abortion will become legal in New Zealand (and thus become more widespread). The only real debate on this will be the parameters.

The incoming Labour government campaigned on the pledge to make education free for college and university students. This plan will gradually come into effect over the next several years. Ardern’s Labour also plans to boost student allowances. Money has to come from somewhere for this to happen. The already high amount of money being borrowed will only increase. Added to this is Ardern’s support for the welfare state and pledge to eradicate child poverty. These kinds of blanket economic promises are hugely problematic, though, because New Zealand is already catastrophically in debt.

New Zealand’s national debt is around $530 billion and rising (us$371 billion). That may not seem like much when compared to the much-discussed U.S. debt of $20 trillion, but New Zealand’s population is only 4.7 million. That means New Zealand debt per person (us$80,000) is far higher than U.S. debt per person (us$63,000). New Zealand has turned into a thin veneer of an economy. And the new Labour government wants to borrow even more, no doubt from Chinese lenders looking to maneuver themselves into an advantageous position over a crippled nation.

One of Labour’s ways to try to balance the books is by introducing a new proposed tax on water and pollution. This has infuriated farmers, who will be the ones to feel a greater burden on an already straining industry. And considering the total national debt, taxes like these are only minor bandages applied to a decapitated body.

All of these issues make New Zealand’s future look bleak and scary. And they make any proposed moves to further separate itself from its allies, America and the United Kingdom, even more ludicrous. New Zealand is a hobbled nation, breaking ties with its friends. Eventually, it will find itself very much alone and at the mercy of an Asia-dominated Pacific. The status quo New Zealand has enjoyed will not last long. Tough, tough times are coming. Any objective observation will tell you that. And when push comes to shove (as it historically always does), New Zealand’s military will be nothing to fall back on—especially considering that Ardern’s “hero,” former Prime Minister Helen Clark, totally stripped down the New Zealand military to only two combat boats and no combat planes.

A massive crash is coming. What can be done for New Zealand?

These are not problems that any “rock star” politician can solve. What’s worse is that the incoming government is not even trying to solve them; instead, it is plowing into the night like a freight train on an inevitable collision course. New Zealand has become a mere shadow of what it once was. It has become an irreligious, immoral, anti-monarchy, debt-laden, defenseless socialist state, desperately borrowing money in order to stay alive. As a New Zealander, it hurts to say it. But those are just the facts.

It may be the “in thing” these days to be flippant toward religion. But I do believe in God, and I believe that while New Zealand in the past held to some semblance of biblical morality, the nation enjoyed blessings and prosperity, underneath the pomp and regality of a monarchy that likewise held respect toward a higher power. These were the years of strength, prosperity, education and opportunity for the Empire and her populations. Over the last several decades, however, all that has changed.

Our nations have become increasingly godless and irreverent. Society has never before seen such a widespread change in such a short period of time. Homosexuality is now to be admired. Abortion is equivalent to getting a tooth pulled. Gender is fluid. And over those same years, New Zealand—along with the U.S. and its Commonwealth “friends”—have suffered a major increase in catastrophic disasters, ballooning debt and weakening influence. I believe there is a connection. The Bible says as much. It prophesies as much for the “end of the age”: an increased national lack of faith (Luke 18:8), an increase in homosexuality and other deviant sexual practices (Romans 1:26-27), an increase in earthquakes (Matthew 24:3, 7), an increase in general godless secularism (2 Timothy 3:1-7), and widespread belief in evolution (Romans 1:18-25). Believe it or not, it even prophesies a break in relations between America and the British Commonwealth, alongside the collapse of the British monarchy itself. Through our connection with the British Empire, it does prophesy New Zealand’s downfall. (Read about this in The United States and Britain in Prophecy, by Herbert W. Armstrong).

So perhaps we collectively should think more deeply about the problems plaguing our country and the reason for them, instead of becoming swept up in irrational “Jacindamania.” Because this is a matter of life and death. No human can pull us out of this one. It’s going to take a much higher power. The sooner we recognize it, the better.