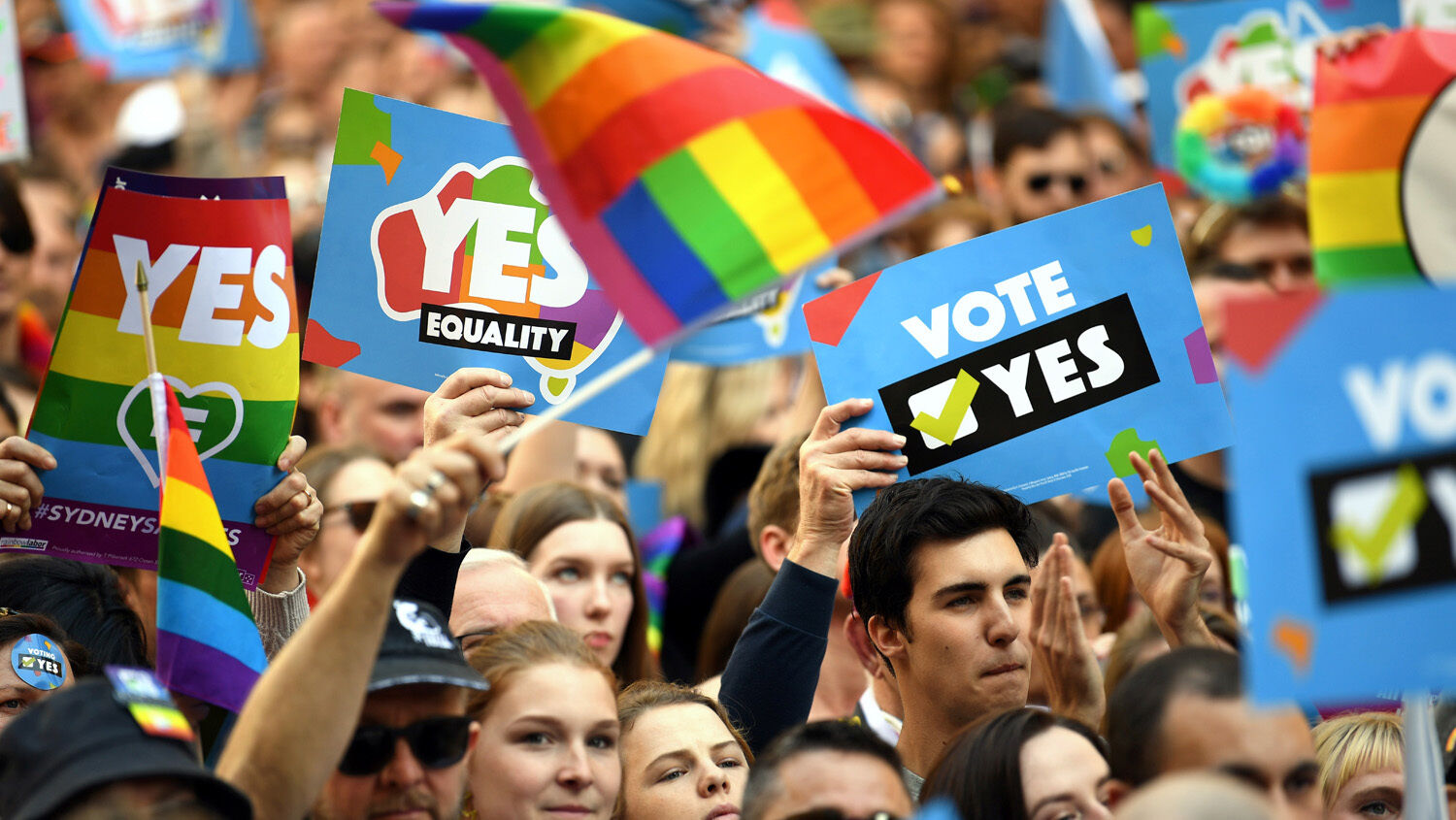 Australia is on the verge of legalizing same-sex “marriage.” From September 12 until November 7, ballots will go out. Australians will cast their postal vote with a “Yes” or “No” on whether to amend the Marriage Act. If the “Yes” vote wins, Prime Minister Malcolm Turnbull will introduce an amending bill by the end of December.

The vote has sparked heated debate. The “Yes” campaign says the vote is just about two people loving each other. But there is far more at stake.

Amendments to marriage laws strike at the heart of free speech and religious liberty in Australia. To say—as many “Yes” advocates do—that there will be no consequences for “No” voters is untrue.

Many who believe in traditional marriage fear swift backlash if the law changes. A change in the Constitution would lead to what Conservative Sen. Cory Bernardi called “weaponized state and territory laws.” State-level “hate speech” laws could suddenly apply to everyday Australians who oppose same-sex unions. State hate speech laws have already been abused under the Racial Discrimination Act.

State law will give homosexuals and their supporters power to attack their opponents. Bernardi continued, “You can imagine the flood of claims, the legal warfare, the barrage of abuse and insults because you are starting to question what your children will be taught in school or you dare not to recognize a couple as a married couple because they happen to be of the same gender.”

Just about every time homosexual “marriage” has been legalized, a persecution of those who disagree has followed. Individuals cannot simply opt out by refusing to participate in homosexual “weddings.” Bakers must make homosexual “wedding” cakes, photographers must agree to photograph the ceremonies, etc. Worse, the education system swiftly changes, so that children are taught from the earliest years of elementary school that homosexuality is normal. For example, take Steve Tourloukis in Canada. He lost the right to remove his child from sex-education programs in school. The programs were made compulsory after the redefinition of marriage.

It would be naive to think that lesbian, gay, bisexual and transgender (lgbt) special-interest groups wouldn’t use the same silencing tactics here. Just ask Hobart Archbishop Julain Porteous. He distributed a booklet to Catholic schools and churches with the banner “Don’t mess with marriage.” He said that homosexual parenting endangers a child’s upbringing. A complaint was soon lodged by transgender activist and Federal Greens candidate Martine Delaney. According to abc, Delaney argued that “some freedoms are not absolute, and that in a secular society religious freedom must sometimes give way to the law.” The poor archbishop was dragged off to a tribunal. You see, it isn’t just about getting same-sex “marriage” legalized; already it is about silencing the opposition.

In a debate on Sky News, “Yes” campaigner Christine Forster supported Delaney, saying, “The reason why that priest was taken to the tribunal was because he made a statement that someone found offensive.” Think of how much worse it could be with federal law backing up such claims!

Activists behind this push for homosexual “marriage” have admitted that this is merely a stepping-stone on the path to getting their way. Author, activist and lesbian Masha Gessen said in a 2012 speech at the Sydney Writers Festival:

Do you really think lgbt activists want freedom for all, including those who don’t agree with them?

‘Trust Us,’ Say the Politicians

Did you know Australia has no bill of rights? It is the only Western liberal democracy that doesn’t have one. Australians have no equivalent to the First Amendment of the United States Constitution. There is no law protecting freedom of speech. High Court Judge Daryl Dawson once said, “The dreamers [of the Australian Constitution] preferred to place their faith in the democratic process for the protection of individual rights.”

Do you trust politicians to protect individual rights? Did they protect the archbishop of Hobart?

The Turnbull government has tried to assure Australians that any amendments to the Constitution will be accompanied by religious protections. But no examples have been forthcoming. “Just trust us,” the politicians say.

It is hard to see how Turnbull could guarantee such protections. And without protection or a bill of rights, opponents of the lgbt movement could be even more exposed than their Western counterparts.

Former Prime Minister John Howard has warned that the government is being deceitful. “It is completely disingenuous to assert that a change of this magnitude to a fundamental social institution does not have consequences,” Howard stated.

And where does the protection line get drawn? Will parents have protection when they want to pull their children from sex-education classes? Will preachers be able to refuse to marry same-sex couples? With no guarantees from the government, the protections for freedom of speech and religion remain in doubt.

So far, the “No” campaign has primarily been warning of what changes to the marriage law will do to our freedom. “Yes” campaigners have tried to assure the public that freedom of choice will remain. The government promises to protect freedom. Both sides are waging a war about what they want to be free to do.

But in the clamor, who stops to consider what God thinks about all our supposed freedom?

To both the religious and the irreligious, God says, “And ye shall know the truth, and the truth shall make you free” (John 8:32). How many Australians, or anyone in this debate, are looking for God’s perspective?

Notice what Trumpet editor in chief Gerald Flurry wrote in his April 2012 Trumpet article titled “What Is True Freedom?”:

It is very difficult to keep God’s law. But the problem isn’t with the law, it is with us. We need to change and conform ourselves to that law. We need to replace the wickedness of our hearts with the righteousness of God by writing God’s law in our hearts! (Hebrews 8:8-10). We need to write God’s law on our hearts indelibly—to etch it on our hearts and minds so it will never go away! That will bring true freedom into our lives!

We have been deceived to believe just the reverse—that God’s law somehow enslaves us. That is false! Beware of men—no man can give you true freedom! Only God can do that.

If marriage laws change, those who oppose it could quickly find themselves neck-deep in lawsuits and criminal charges. Look at the nations where same-sex “marriage” is made law! Do those societies look peaceful? A departure from the biblically defined family has only brought more unhappiness and curses! People are in bondage to their sins. And those who oppose changing marriage are intimidated by the violent and vocal minority. Neither side has freedom because neither side is looking to its Creator! Australia is no different.

We should have joyful freedom. I want to be free! “Live as free men, yet without using your freedom as a pretext for evil; but live as servants of God” (1 Peter 2:16; Revised Standard Version).

Neither “Yes” nor “No” voters are truly free unless they start living by God’s law. It is God’s law that will give you a happy and harmonious marriage. It is God’s law that is going to bring you true joy and real, lasting freedom. Remember, God wants you to live “as free men”—His way. That certainly doesn’t mean living in a homosexual relationship. But neither does it mean accepting the many perverse trends that are so common in society today.

Mr. Flurry concluded, “How beautiful and precious is freedom! True freedom is a wonderful gift! The greatest gift God can give us is to make us truly free.” In a society of diminishing freedoms, this is how you can be free.

For more information on the wonderful purpose for marriage and family, and the truth behind the push for homosexual “marriage,” order our free booklet Redefining Family.