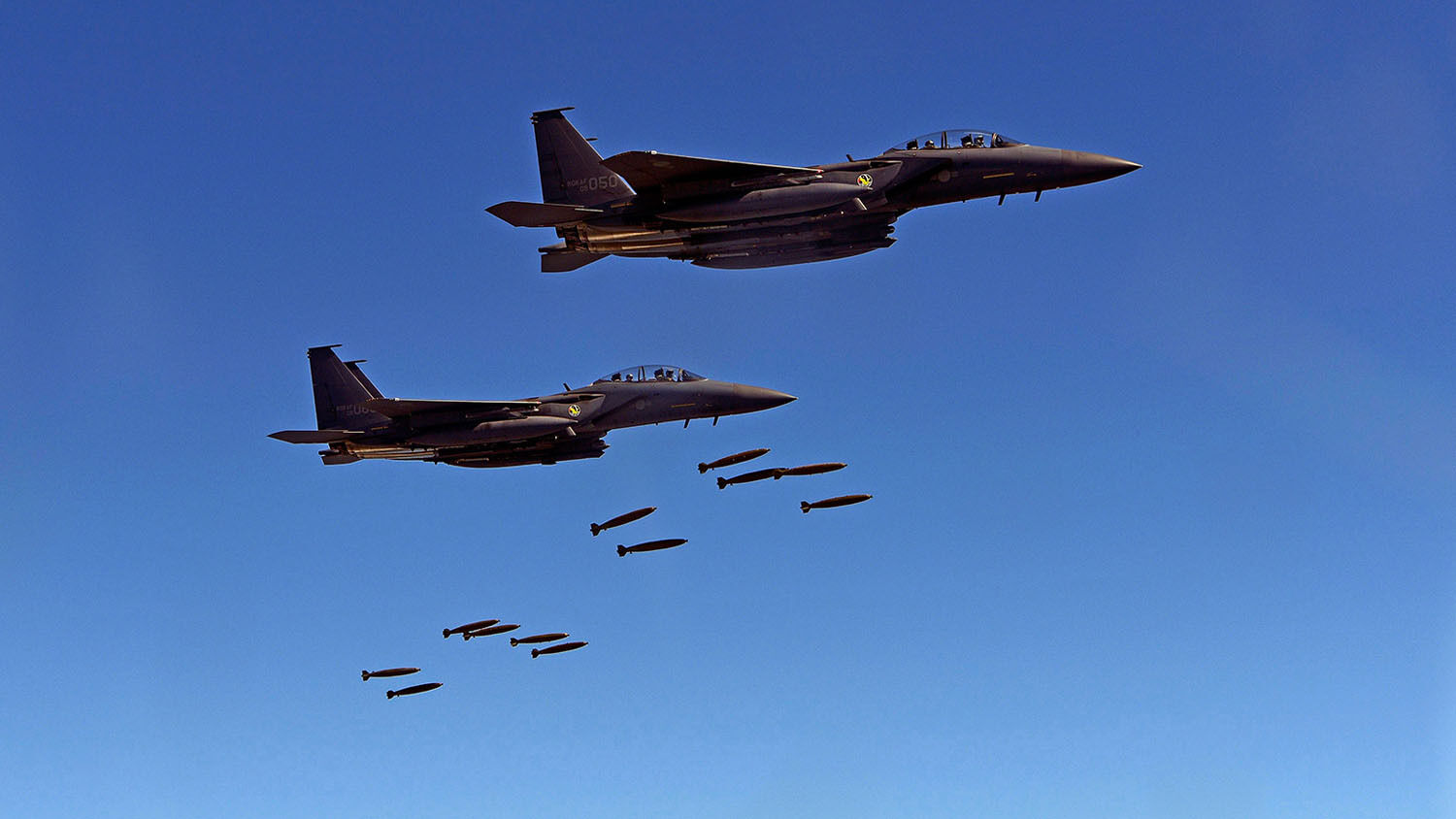 The crisis on the Korean Peninsula could change the global power balance.

North Korea carried out its sixth and most powerful nuclear test on September 3, triggering a 6.3-magnitude earthquake and unleashing a fresh firestorm of condemnation from world leaders.

This test marks a major milestone in Pyongyang’s advance toward developing a nuclear deterrent. While North Korea’s five previous nuclear detonations tested weapons that use uranium and/or plutonium for their explosive yield, the September 3 weapon is thought to have been a far more powerful hydrogen bomb—or thermonuclear bomb. A thermonuclear weapon could potentially deliver a “city-buster” yield and be small enough to fit on an intercontinental ballistic missile (icbm).

Geopolitical Futures wrote on September 5 that the message the North Korean test sent to America was clear: “The United States will either have to accept North Korea as a nuclear power, or it will have to destroy North Korean nuclear facilities while it still can.”

Much hinges on the United States’ response to the detonation. “At stake is nothing less than the regional balance of power for decades to come,” Geopolitical Futures wrote.

If Washington were to strike Pyongyang to destroy its nuclear facilities, Geopolitical Futures said South Korea would most likely back the efforts.

But such backing from Seoul is not guaranteed.

Geopolitical Futures wrote that, absent support from South Korea, the balance of power in Asia and beyond could drastically change:

But what if we’re wrong? What if a U.S. attack is predicated on South Korean involvement? What if the U.S. can’t attack if Seoul doesn’t participate? If this is the case, then the U.S. is simply going to have to accept North Korea as a nuclear power.

In such a scenario, Geopolitical Futures said it would not be long before Pyongyang used this nuclear power to force South Korea to end its alliance with America and to oust U.S. forces from the Korean Peninsula:

North Korea, having ensured its survival and the gamble that threatening Seoul would give it enough time to develop a nuclear weapon, would then be able to do what it has long wanted: to unify the peninsula under its rule. This wouldn’t be done forcefully or quickly—Pyongyang would instead use its newfound security to pressure the South to abandon its defense treaty with the U.S. and to get U.S. troops off the peninsula. As far-fetched as it might seem, it is a viable scenario if Pyongyang possesses a nuclear deterrent.

The ramifications of such an ouster, according to Geopolitical Futures, would go far beyond the Korean Peninsula:

[I]t is a scenario that would profoundly change the balance of power in East Asia. It would undermine the credibility of U.S. security guarantees, forcing countries such as Japan to reconsider the terms of their alliance. If Japan cannot depend on the U.S., then it would likely redevelop offensive military capabilities of its own ….

Geopolitical Futures went on to show that Japan is already taking such steps and the deepening North Korean threat is hastening Tokyo’s march toward military normalization. From there, Geopolitical Futures said such an ouster of U.S. forces from South Korea would work to China’s advantage in the South China Sea and beyond:

China would benefit from this scenario. Beijing, of course, would welcome any weakening of the U.S. position in Asia. The government could point to the frailty of U.S. promises as a way to enhance its position, especially among U.S. allies like Indonesia and the Philippines. It also wants U.S. troops to leave South Korea.

The Trumpet has long expected the balance of power in Asia to shift away from the U.S. and toward China (and Russia). In our January 2014 issue, we wrote: “The scenario of an America-free Asia will not remain hypothetical for much longer. We can already see tectonic geopolitical shifts that are rapidly turning it into a reality.”

For decades, the Trumpet has issued this same forecast. And now an increasing number of trends, threats and eventualities—such as the Geopolitical Futures analysis quoted above—show how it could happen.

The Trumpet, and our forerunner the Plain Truth, have forecast this power-balance shift because Bible prophecy says it will happen in the very near future—in the lead-up to a third world war.

Decades ago, Herbert W. Armstrong forecast the deterioration of U.S. power and influence. Following America’s botched attempt to invade Cuba back in 1961, Mr. Armstrong laid the blame not at the feet of America’s military or the Kennedy administration but at the feet of the people of the United States: “Unless or until the United States as a whole repents and returns to what has become a hollow slogan on its dollars: ‘In God we trust,’ the United States of America has won its last war! … [T]he God America has deserted gave it its most humiliating defeat! What does the Cuban debacle mean? It means, Mr. and Mrs. United States, that the handwriting is on your wall!” (Plain Truth, October 1961).

Mr. Armstrong understood that U.S. power was eroding and that the country was headed for geopolitical irrelevance and even collapse. He made his forecasts with confidence because they were founded on Bible prophecy. The Scriptures include numerous clear and specific prophecies about the descendants of Israel, which include the modern people of America. God vowed to the people of Israel that if they rejected His law, “I will break the pride of your power” (Leviticus 26:19).

In the decades since Mr. Armstrong’s writings, the people of the U.S. have intensified their hatred for God’s law. And in the time since, the U.S. has entered into several military conflicts, with each evaporating a little more of America’s pride in its power.

On Oct. 1, 2012, Trumpet editor in chief Gerald Flurry said America’s lethargic reaction to the Benghazi massacre earlier that year showed that the Leviticus 26:19 prophecy had then been entirely fulfilled. He said: “It’s no longer God saying, ‘I will break the pride of your power.’ It’s now God has broken it!”

Just as the Benghazi massacre did back in 2012, the North Korean crisis is putting the matters of America’s pride in its power on display for the world to see. South Korea, Japan and an increasing number of nations see it clearly and are preparing for a time when the U.S. cannot be counted on to protect them.

Analysts sometimes mention the word Armageddon found in Revelation 16:16, but it is unheard of for experts to discuss the kings of the east written about in verse 12 of that same chapter. Revelation 16, Ezekiel 38 and other Bible passages show that the “kings of the east” power bloc will play a major role in end-time prophecy. This will be a group of Asian nations headed by Russia and, to a lesser degree, China.

Revelation 9:16 shows that the combined armies of all these Asian “kings” will amount to 200 million soldiers—a force magnitudes larger than any in history. The implication is that, whether the Koreas unite, the peninsula will eventually lend its military might to this massive bloc led by Russia and China.

From there, Bible prophecy goes on to show that a united European force will feel threatened by this Asian bloc to its north and east (Revelation 9:1-12; Daniel 11:40-44). The Europeans will attack, and the Eastern army will counterattack (Revelation 9:13-21). The blood spilled in these battles will write the darkest pages in humankind’s war-ridden history.

The North Korean crisis, and the way it places America’s broken will on display for the world to see, is one of many factors that are now setting the geopolitical stage for this future war. Matthew 24:21-22 and Daniel 12:1 show that the violence of that war will be unprecedented and will threaten to extinguish all human life from Earth.

To many, it will appear to be mankind’s final chapter. But the Bible makes plain that it is actually only the last page of mankind’s prologue.

Prophecy shows that nuclear World War iii will be interrupted by the return of Jesus Christ (Matthew 24:22; Revelation 17:14). These armies of Asia and Europe will turn their weapons against Christ, but He will bring an immediate halt to all the bloodshed and destruction.

In his article “Matthew 24 Unlocks the Seven Seals,” Trumpet editor in chief Gerald Flurry wrote: “Christ will put down all rebellion. He is sick of the sin and lawlessness in all corners of this world, and He will finally deal forcibly with it.”

After squelching the violence, Christ will force upon the Asians, Europeans and all other men and women the peace that has always eluded humankind.

Then, chapter one of mankind’s real story will at last begin.

On the topic of this future era of peace, Mr. Armstrong wrote:

To understand more about that radiant future, order a copy of our free booklet The Wonderful World Tomorrow—What It Will Be Like.