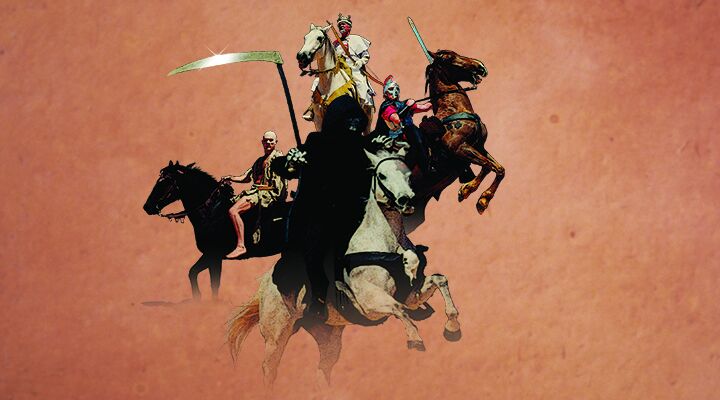 The book of Revelation is mysterious. It is impossible to understand on its own, but God intended it to be that way until this end time. The seven seals of Revelation must be unlocked by looking elsewhere in the Bible: Matthew 24. We need to know about these seals because they lead step-by-step to the return of Jesus Christ.

“And one of the elders saith unto me, Weep not: behold, the Lion of the tribe of Juda, the Root of David, hath prevailed to open the book, and to loose the seven seals thereof” (Revelation 5:5). Christ has qualified to replace Satan on Earth’s throne by overcoming him in the titanic battle of the ages. Only Christ can unlock the seals.

The Olivet Prophecy in Matthew 24 is one of the longest single prophecies in the Bible. It is the most important prophecy that Christ ever revealed while on Earth. It is about the birth of a new age after an eruption of world crises. The seven seals represent (in order): false prophets, war, famine, pestilence, tribulation, heavenly signs and the seven trumpets that lead directly to Christ’s return. These events happen in rapid succession!

“And I saw when the Lamb opened one of the seals, and I heard, as it were the noise of thunder, one of the four beasts saying, Come and see. And I saw, and behold a white horse: and he that sat on him had a bow; and a crown was given unto him: and he went forth conquering, and to conquer” (Revelation 6:1-2). At first glance, you might think this man is Jesus Christ. The main difference is the weapon: Christ comes with a sword, not a bow (Revelation 19:11-16). This false Christ has deceived the whole world—the religious and the nonreligious. He causes more destruction than the other six seals, and it’s all through deception.

“And as he sat upon the mount of Olives, the disciples came unto him privately, saying, Tell us, when shall these things be? and what shall be the sign of thy coming, and of the end of the world? And Jesus answered and said unto them, Take heed that no man deceive you. For many shall come in my name, saying, I am Christ; and shall deceive many” (Matthew 24:3-5). Religious deception is the first sign Christ gives that His return is near. False ministers focus on the person of Christ; their “gospel” is on the man instead of the message.

“And there went out another horse that was red: and power was given to him that sat thereon to take peace from the earth, and that they should kill one another: and there was given unto him a great sword” (Revelation 6:4). War is the second seal.

“And ye shall hear of wars and rumours of wars: see that ye be not troubled: for all these things must come to pass, but the end is not yet” (Matthew 24:6). War has been a constant throughout history, but the conflicts before Christ’s Second Coming will be 100 times worse than ever before! Nuclear bombs now make possible the extinction of all human life. Once a nuclear war starts, it can’t be stopped.

“And when he had opened the third seal, I heard the third beast say, Come and see. And I beheld, and lo a black horse; and he that sat on him had a pair of balances in his hand. And I heard a voice in the midst of the four beasts say, A measure of wheat for a penny, and three measures of barley for a penny; and see thou hurt not the oil and the wine” (Revelation 6:5-6). Famine is the third seal.

“And when he had opened the fourth seal, I heard the voice of the fourth beast say, Come and see. And I looked, and behold a pale horse: and his name that sat on him was Death, and Hell followed with him. And power was given unto them over the fourth part of the earth, to kill with sword, and with hunger, and with death, and with the beasts of the earth” (verses 7-8). Pestilence, or epidemic disease, is the fourth seal.

“For nation shall rise against nation, and kingdom against kingdom: and there shall be famines, and pestilences, and earthquakes, in divers places” (Matthew 24:7). Famine and pestilence will unleash a worldwide death plague like we have never seen before.

“All these are the beginning of sorrows” (verse 8). The first four seals are bad, but it gets a lot worse!

“And when he had opened the fifth seal, I saw under the altar the souls of them that were slain for the word of God, and for the testimony which they held: And they cried with a loud voice, saying, How long, O Lord, holy and true, dost thou not judge and avenge our blood on them that dwell on the earth? And white robes were given unto every one of them; and it was said unto them, that they should rest yet for a little season, until their fellowservants also and their brethren, that should be killed as they were, should be fulfilled” (Revelation 6:9-11). Tribulation is the fifth seal.

The Great Tribulation is not the wrath of God. This 2½-year period before the Day of the Lord is Satan’s wrath. God’s own lukewarm people will be killed because they weren’t dedicated to Him and His message. They must sacrifice their lives to enter into the Family of God.

“Then shall they deliver you up to be afflicted, and shall kill you: and ye shall be hated of all nations for my name’s sake. And then shall many be offended, and shall betray one another, and shall hate one another. And many false prophets shall rise, and shall deceive many. And because iniquity shall abound, the love of many shall wax cold” (Matthew 24:9-12). The clear picture here is one of chaos and division inside God’s own Church. The vast majority of God’s poeple have fallen away in this end time (2 Thessalonians 2:2). Whether God’s people stay loyal or not, the world will hate them. Only the loyal remnant, however, will receive God’s protection. The majority of God’s people will suffer for losing their excitement about Christ’s return to solve mankind’s problems. Their love has waxed cold because of lawlessness.

One of the many obvious signs of the coming Great Tribulation is America’s staggering national debt. There is no end in sight to the massive debt accumulation. The borrower is slave to the lender (Proverbs 22:7). America is the greatest borrower in history. It won’t be long before our creditors demand their money back.

“And this gospel of the kingdom shall be preached in all the world for a witness unto all nations; and then shall the end come” (Matthew 24:14). A man who delivered the one true gospel message to the world has already come and gone. The stage is now set for the rapid chain of events that leads to Christ’s return. That chain includes the abomination of desolation, or the European army surrounding Jerusalem (verse 15; Luke 21:20).

“For then shall be great tribulation, such as was not since the beginning of the world to this time, no, nor ever shall be. And except those days should be shortened, there should no flesh be saved: but for the elect’s sake those days shall be shortened” (Matthew 24:21-22). We stand on the brink of nuclear annihilation. “Mankind has never been in this position before,” Winston Churchill said after World War ii.

“Watch ye therefore, and pray always, that ye may be accounted worthy to escape all these things that shall come to pass, and to stand before the Son of man” (Luke 21:36). God tells us to stay awake spiritually so we can escape disaster. We must keep up with world news so we can see prophecy fulfilled.

“And I beheld when he had opened the sixth seal, and, lo, there was a great earthquake; and the sun became black as sackcloth of hair, and the moon became as blood; And the stars of heaven fell unto the earth, even as a fig tree casteth her untimely figs, when she is shaken of a mighty wind” (Revelation 6:12-13). Heavenly signs are the sixth seal.

“Immediately after the tribulation of those days shall the sun be darkened, and the moon shall not give her light, and the stars shall fall from heaven, and the powers of the heavens shall be shaken” (Matthew 24:29). Imagine that! Complete darkness. What could be a more obvious sign of fulfilled prophecy?

“The sun shall be turned into darkness, and the moon into blood, before the great and the terrible day of the Lord come” (Joel 2:31). Here, God gives us the sequence of events: Great Tribulation (2½ years), heavenly signs, Day of the Lord (one year). All this will happen exactly as Jesus Christ foretold 2,000 years ago.

“For the great day of his wrath is come; and who shall be able to stand?” (Revelation 6:17). This references the seventh seal: seven trumpets culminating in the return of Jesus Christ.

“And he shall send his angels with a great sound of a trumpet, and they shall gather together his elect from the four winds, from one end of heaven to the other” (Matthew 24:31). The seven trumpets make up the seventh seal—they involve the armies of this Earth fighting against Christ at His return. Christ will put down all rebellion. He is sick of the sin and lawlessness in all corners of this world, and He will finally deal forcibly with it.

“And the seventh angel sounded; and there were great voices in heaven, saying, The kingdoms of this world are become the kingdoms of our Lord, and of his Christ; and he shall reign for ever and ever” (Revelation 11:15). Our Savior will rule with a rod of iron and bring peace and joy to all people. Man could never achieve this future on his own.