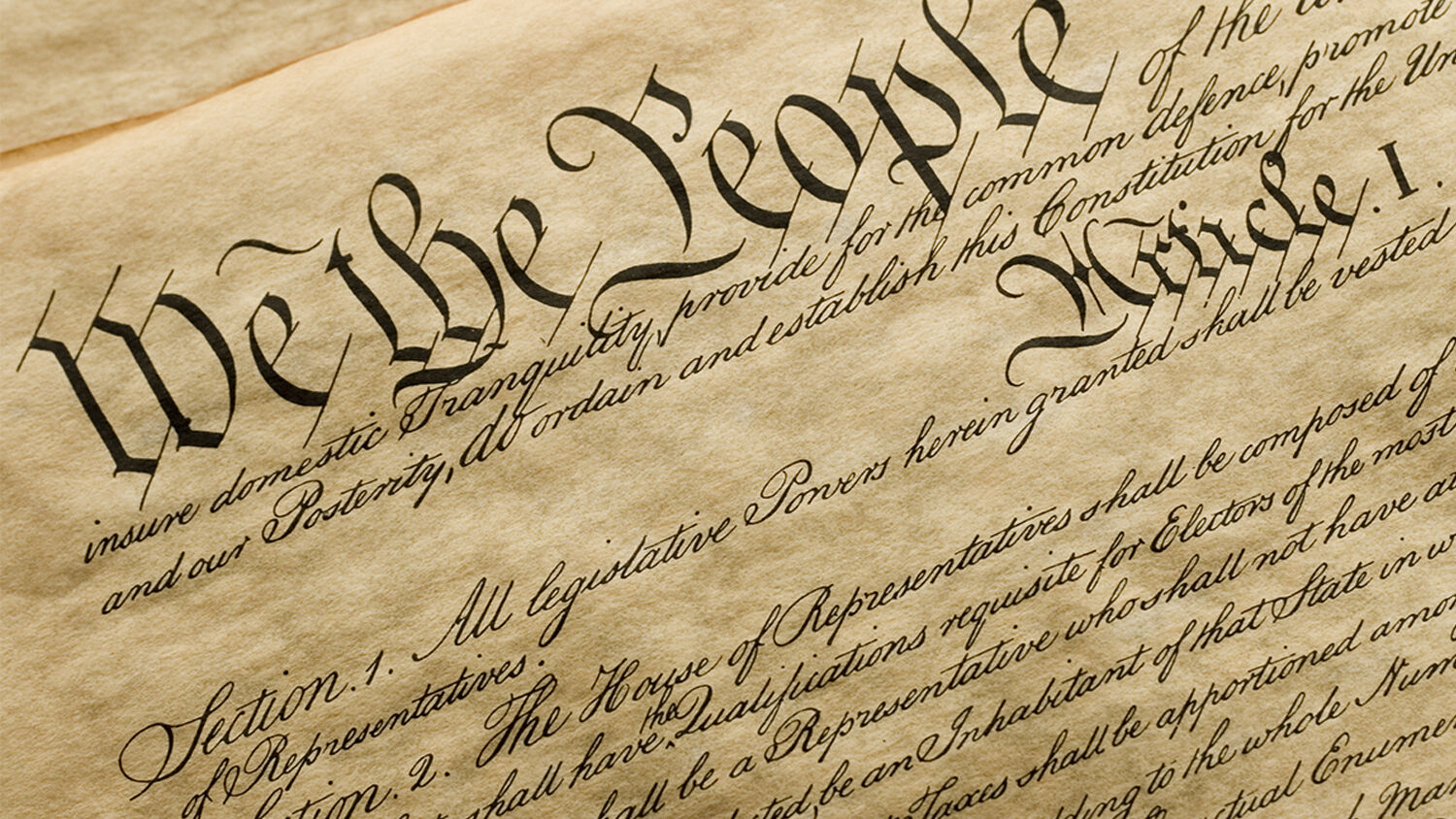 There is a dogma in the minds of many American youths: Tolerance is a virtue.

It is preached in the halls of schools, on the streets at protests, and in the editorials of media. “Higher education can lead the way to a more tolerant society,” wrote the Higher Education Today blog. “In fact, it may very well be the number one societal good higher education has to offer.”

To more and more American youths, it is religious freedom which must give way.

Religious Freedom vs. the Right to Cakes and Abortion Pills

Pew Research Center has published two studies which, if placed side by side, show how America’s disrespect for religious freedom hits at the core of its founding.

The first study was called “Where the Public Stands on Religious Liberty vs. Nondiscrimination.” It showed that Americans under 30 care less for religious freedom than the rest of the country, especially when it conflicts with other rights. The second study was about America’s state constitutions. Unlike the federal Constitution, every single one of America’s 50 states mentions “God or the divine” at least once.

The juxtaposition is shocking. In the first study, Pew asked whether “employers who have religious objections should be required to cover contraception” in health insurance plans. Of those under 30, 75 percent believed the employers should be forced to violate their religious conscience. This was higher than any other group. Pew then asked whether “business owners with religious objections to homosexuality should be required to provide services to same-sex couples.” Of those under 30, 59 percent—again, higher than any other age group—agreed the government should force businesses to comply.

Public split over whether wedding businesses should be able to refuse service to gay couples for religious reasons: https://t.co/786cJMPEE6 pic.twitter.com/tisG3dDjjk

Americans may recognize these scenarios as real-life court cases that have already been occurring. The Affordable Care Act of 2010 required employers to provide contraceptives, abortion-inducing drugs and sterilizations to their employees. The Obama administration refused to exempt religious organizations. So a group of Catholics, backed by Hobby Lobby, sued. The Supreme Court gave them an exemption. But the American Civil Liberties Union (aclu) tries in all other areas to prosecute such religious excuses to “discriminate.”

In June, the Supreme Court announced it would hear a more notorious case—involving a bakery refusing to design a wedding cake for a same-sex couple. The baker, Jack Phillips, believes that he is “serving Christ” with “every cake he designs.” As National Review’s Ryan T. Anderson described, “He had previously turned down requests to create Halloween-themed cakes, lewd bachelor-party cakes, and a cake celebrating a divorce. Yet Jack was never reprimanded over those decisions. He found himself in hot water only with the same-sex-wedding cake.”

“Younger people now tend to be a little less religious, which makes them less sympathetic to religious freedom claims,” Michael Moreland, a professor of law and religion at Villanova University, told Deseret News.

If the Supreme Court suddenly consisted of the American public under 30, Jack Phillips would be immediately condemned and Christians would be forced to violate their religion. Tolerance, or nondiscrimination, would trump religious freedom. Meanwhile, same-sex couples could simply choose another bakery.

Destroyed for Lack of Knowledge

“We’ve seen evidence that younger Americans don’t hold religious freedom in the same high esteem that generations before them have,” Roger Gannam of Liberty Counsel told Deseret News. “We have our work cut out for us to educate them.”

This is where the second Pew study is so instructive. Religion was so foundational in crafting America’s state constitutions that every state mentions God or the Divine. Pew counted nearly 200 mentions in all, including “Supreme or Sovereign Being,” “Creator,” “providence,” “divine” and “Almighty.”

God or the divine is referenced in every state constitution https://t.co/Go4zOl94EF pic.twitter.com/UuNv5D7938

In fact, the reason Founding Father Thomas Jefferson had so much trouble getting Americans to accept a “Bill for Establishing Religious Freedoms” was because of the supporters of the established church. They believed the only way to establish a virtuous population and government was by promoting religion through an established church. Abolish the established church with a “Freedom of Religion” bill, they thought, and religion would lose its influence; morality would free-fall.

Today, our most recent generation knows little to nothing of the Bible—53 percent of Americans have read little to none of it. Without that knowledge, they have little sympathy or sense of importance for the “freedom of religion” enshrined in the Constitution.

Far gone is the biblically literate generations of the Founding Fathers. The book that kick-started America’s independence, Thomas Paine’s Common Sense, is littered with biblical references. In arguing against the English monarchy, he draws on the sayings of Jesus Christ, allusions to the patriarchs, and in-depth readings of Israel’s rejection of Samuel for a “king to judge us.” Now the average American isn’t biblically literate enough to comprehend Paine’s angle.

Even Benjamin Franklin, who was not even a Christian, testifies to America’s biblical literacy. When he agreed to translate a Boston minister’s sermon for a European audience, he “told the minister he would have to insert scriptural citations for the biblically illiterate non-Americans”:

It was not necessary in New England, where everybody reads the Bible and is acquainted with Scripture phrases, that you should note the texts from which you took them; but I have observed in England, as well as in France, that verses and expressions taken from the sacred writings, and not known to be such, appear very strange and awkward to some readers; and I shall therefore in my edition take the liberty of marking the quoted texts in the margin.

It is common today to hear of a dominant “religious right.” To take one example from Aeon magazine, we are supposedly in a time where “religious zealotry exercises greater influence on matters of law and public policy.” This is absolute nonsense. American religion has been fighting a losing battle for decades, with victories going to a biblically illiterate, pro-tolerance movement in everything from same-sex “marriage” to drug laws to educational policy to abortion “rights.”

If Americans were to “blow the dust off their Bibles,” as the late Herbert W. Armstrong told his listeners, they might stumble across the passage in Hosea 4:6 where God says His people—and specifically the nations of America and Britain—“are destroyed for lack of knowledge: because thou hast rejected knowledge, I will also reject thee ….”

As Andrew Miiller pointed out in our July Philadelphia Trumpet magazine, that’s exactly the warning message that we’ve declared “since Volume 1, Issue 2, in June 1990.” America’s fall will not be because of climate change or economic stagnation or foreign invasion, but because of failed morals. Americans no longer have a working knowledge of the Bible, which means they no longer have a working morality.

It is sad to realize that while a deist Benjamin Franklin or Thomas Jefferson (who was accused of being an atheist in the 1800 election) would have recognized the scripture quoted above, today’s American public would not.

Among America’s youth, there is a loathing of religious freedom when it comes up against tolerance. A lack of knowledge deceives them—and it is destroying both their morality and respect for religious freedom. Both are scary, and either one of them can crumble a republic, when, as George Washington explained, “religion and morality are [their] indispensable supports.”