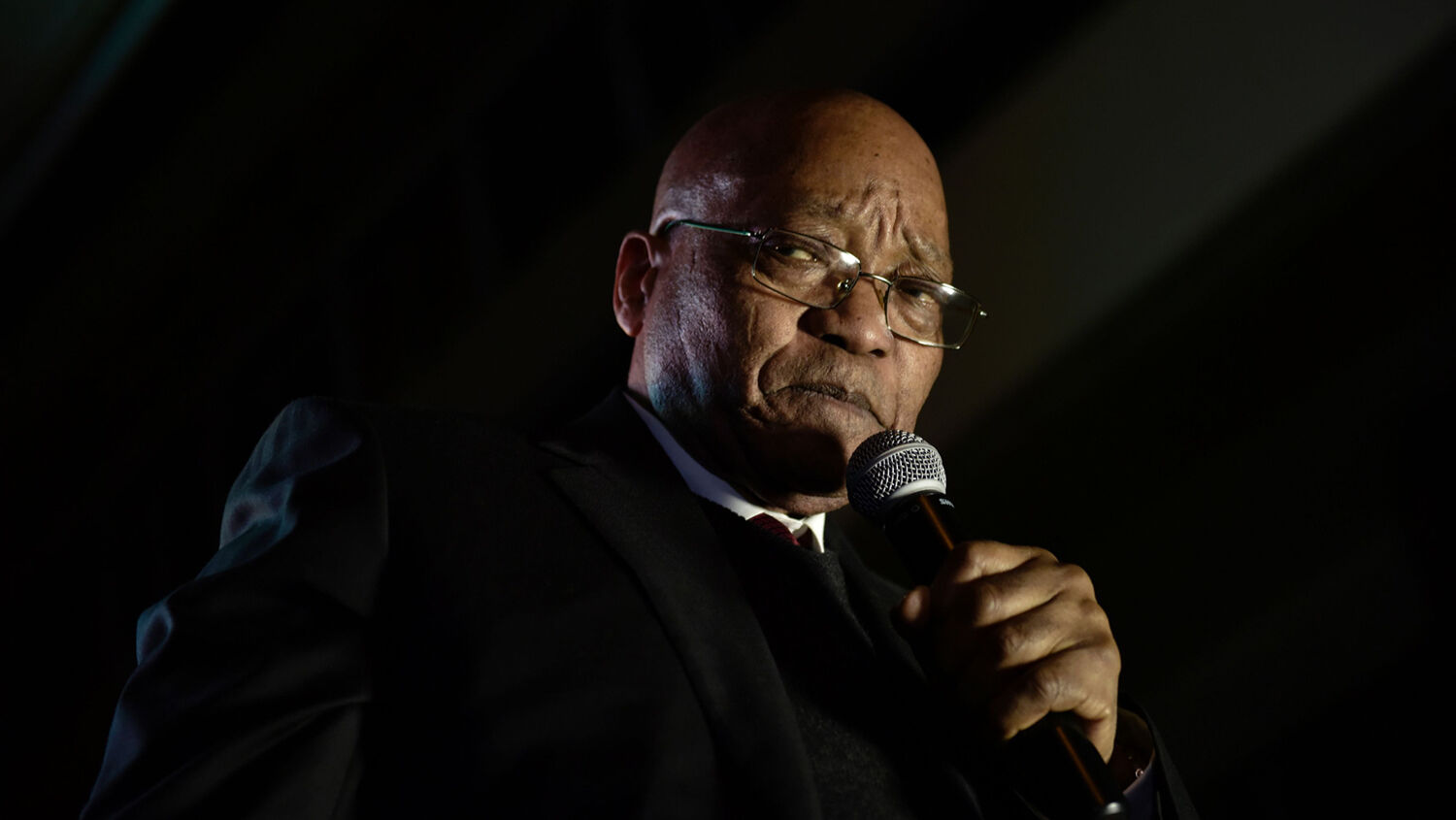 South African President Jacob Zuma gestures as he addresses supporters outside the South African Parliament in Cape Town on August 8, 2017, after surviving a Motion of No confidence.
PIETER BAUERMEISTER/AFP/Getty Images

What the Jacob Zuma presidency means for the Rainbow Nation

For seven times in the past seven years, members of Parliament in South Africa tried and failed to oust President Jacob Zuma by a vote of no confidence through an open ballot. On August 8, they tried again, but this time, through a secret ballot. Secret because opposition M.P.s were confident that some in Zuma’s own party would vote against their leader if they couldn’t be identified.

The ballot results from the motion of no confidence preserved Jacob Zuma. Will they preserve South Africa?

President Zuma emerged as perhaps the biggest winner in the failed no-confidence vote. Fifty-two percent voted in his favor on August 8. Only 2 percent abstained. The remaining 46 percent—which certainly includes some M.P.s from Zuma’s own party, the African National Congress (anc)—voted against him. Still, that wasn’t enough to remove President Zuma.

One day before the vote, when the government formally announced the decision on a secret ballot, National Assembly Speaker Baleka Mbete acknowledged that “a motion of no confidence in the president is a very important matter, a potent tool towards holding the president to account,” constituting “one of the severest political consequences imaginable.”

Zuma apparently survived it, and he will now complete his second term in office, which expires in 2019.

Perhaps the biggest winner actually was the anc, President Zuma’s political party. The anc is credited for liberating the black majority from the repressive apartheid regime of pre-independence South Africa. It is considered the great redeemer that alone can guarantee and safeguard those freedoms. The anc brand, as the Guardian’s David Smith so presciently noted back when Zuma was reelected president in 2014, is bigger than any mortal man. It is bigger than its unbelievably corrupt president.

One of President Zuma’s most recent corruption scandals is his misappropriation of $23 million of state funds for a security upgrade at his private homestead. A court order forced him to repay that money, and he did. Zuma, however, has essentially denied and appealed every other allegation against him—hundreds of counts of corruption!

The anc preserves such a scandalous president perhaps because it would rather preserve itself. An indictment of Zuma and his corrupt anc henchmen could be an indictment of the anc as an organization.

anc leaders also might be biding their time because, while Zuma will remain the president of South Africa for two more years, he will step down as the president of the anc in four months, creating a much-coveted vacancy.

The anc’s chief whip, Jackson Mthembu, cautioned against Zuma’s ouster, saying, “[I]f you remove a president through a vote of no confidence, the government must also collapse.” That, indeed, was what would have happened. Zuma’s entire cabinet would have resigned, and South Africa would have a new president in 30 days.

But notice the rest of his warning: “You’ll be like detonating a bomb; you go into this blindfolded; you don’t even know what’s going to happen thereafter. What if the anc is so divided and so fractured that we kill one another?” If that warning was more of a threat, then it probably worked—for now.

Perhaps the biggest winner is nearly impossible to determine.

Some have said that the opposition actually won a victory of sorts. Even as South African M.P.s were voting, political analysts like Prof. Lesiba Teffo were saying that either way, the opposition would win. Between 20 to 30 anc M.P.s possibly voted against their own party and/or president. iol reported that the 177 votes against Zuma on August 8 were a marked increase from previous ones.

“What if the ANC is so divided and so fractured that we kill one another?”
Jackson Mthembu, ANC chief whip

South Africa remains Africa’s most industrialized nation. But it no longer is the continent’s largest economy—since 2014. The nation is currently in a recession. Its shrinking economy is forcing companies and mines to shut down, and political thugs are murdering professional farmers or forcing them to flee. Investor confidence in South Africa is at a two-decade low, and unemployment is at a 14-year high, at 27.7 percent.

Immediately before the vote, the rand, the South African currency, surged by 0.9 percent because of the likelihood that Zuma would be toppled. “[T]hat proved overly optimistic, and investors are taking out their disappointment on the rand,” wrote the Financial Times. It fell by 1.7 percent immediately after the vote to keep Zuma.

There is a lot of blame to pass around in South Africa for the problems bedeviling the nation. That fact in itself is part of the problem.

Is apartheid to blame for South Africa’s troubles?

Zuma’s anc party supposedly abolished the apartheid 23 years ago when it came to power.

Are the remnants of apartheid—the so-called neocolonialism under the guise of Anglo-American capitalism—the cause of the problems?

The anc has blamed “white monopoly capital” for some of South Africa’s social, economic and political problems. Politicians from the party even said the motion of no confidence was an “imperialist machination” that was tantamount to a political coup via “stooges.” But consider: One of the greatest criticisms against President Zuma was the undue political meddling of a powerful and wealthy Indian migrant family in South Africa—not Western governments.

Zuma is not even South Africa’s main or only problem. The problem is that South Africa has a governance crisis. It has had it since before independence in 1994, and it has it to this day. And it is a problem that plagues every nation today.

As with any problem, the solution can only be found after identifying it. What it will take for South Africa—post August 8—to realize exactly what it needs to do to fix the Rainbow Nation may not be very pleasant. But when that happens, South Africa—the world’s richest nation by commodity wealth—with its talented citizens and abundant minerals, will be a success anyone can have confidence in. That assessment is based on our free book on British Commonwealth nations like South Africa: The United States and Britain in Prophecy.