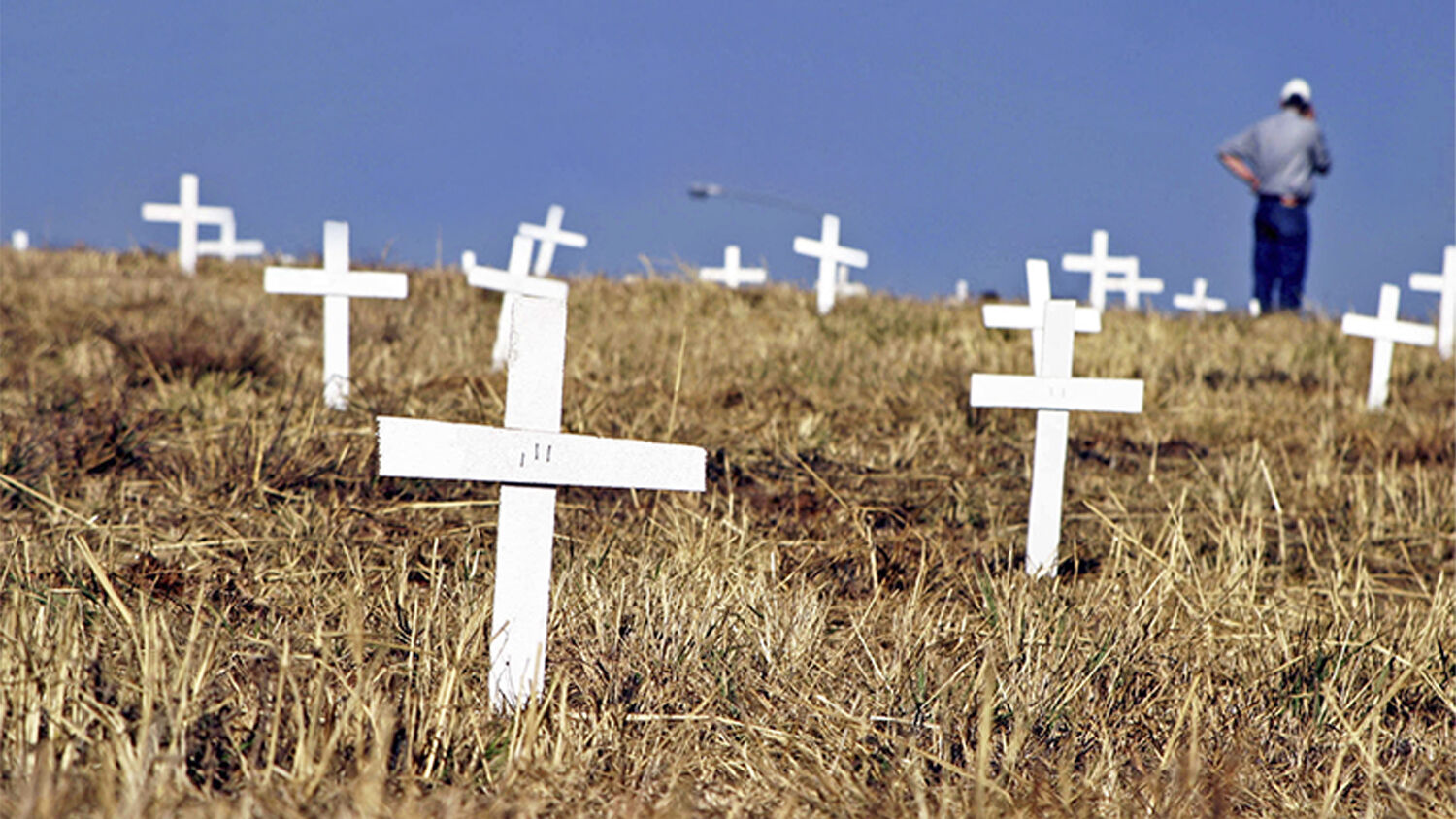 Crosses are planted to represent the staggering rate of farmers murdered in South Africa.
Getty Images

Robert Lynn and his wife, Sue Howarth, were asleep at home in Dullstroom, South Africa, on the night of February 19. Then, shortly after 2 a.m., two gunshots rang through the house. Lynn awoke immediately, but someone struck him with the butt of a gun before he could check on his wife. Three men dragged him to the lounge and tied him to a chair. Lynn offered his attackers his bankcard and all the cash in the house, but they did not want money. Instead they took a blowtorch and torched Lynn’s feet, legs and stomach. They did not stop till they ran out of propane.

The attackers tied a plastic bag around Lynn’s neck and threw him in the back of a pickup truck. Moments later, Lynn heard a thud as the men threw his wife into the truck bed next to him.

The attackers drove the couple to a nearby field. After forcing Lynn to crawl through a barbed wire fence, they shot him in the neck and left him for dead. Lynn survived and crawled back to the roadside where he found his wife struggling to stay alive. Two passersby found the couple the next morning and drove them to a hospital.

Howarth died two days later with many skull fractures and horrific burns on her chest. Her attackers had burned her with a blowtorch, stuffed a plastic bag down her throat and shot her in the head twice. Lynn is recovering from his wounds, and struggling to understand why someone would want to murder his loving wife. “These people … I don’t know what kind of goal they have in life,” he told the Telegraph. “I don’t know what they achieved.”

This horrific incident drew international publicity because Howarth was a British citizen. But brutal, deadly attacks on farmers are common in South Africa. Lynn and Howarth are two of the most recent victims of a violent movement that has been developing for decades. It began in earnest in 1990, when the South African government lifted the ban on the African National Congress and other Communist-aligned organizations.

As South African farmhouses ring with screams of fear and pain, we must understand the real agenda behind these attacks. What is happening in South Africa actually fulfills a prophecy in the Bible. Thus, we can know where this situation will lead.

Farming is South Africa’s most dangerous profession. According to the Transvaal Agricultural Union (tau), 334 farm attacks resulted in 64 deaths last year. This represents the highest such death toll since 2008.

At this point, government statistics on farm attacks have become nonexistent. But tau reports that 1,848 people have been murdered in farm attacks since 1998—1,187 farmers, 490 family members, 147 farm employees, and 24 people who were visiting the farm at the time. With about 32,000 commercial farmers in South Africa, this indicates that farmers are being killed at an average annual rate of 206 per 100,000.

Ernst Roets, Deputy ceo of AfriForum, says the majority of farm attacks are motivated by robbery, while about 4 percent of the 334 attacks that took place last year involved brutal acts of torture like those perpetrated on Lynn and his wife.

The tau estimates that though 14 percent of farm murder victims are black, almost every farm torture victim is white. “It is important to note that not all who are murdered on farms are white people,” Roets told News24. “On the other hand, it is equally important to note that black farmers are not subjected to the same levels of torture as their white counterparts.”

Outside of the worst drug-producing regions of Latin America, the highest homicide rate in the world is in southern Africa. But these attacks on white farmers are not ordinary crimes. They are orchestrated by someone higher up than a few roving bandits or street thugs.

The number of white farmers in South Africa has plummeted from 60,000 in 1993 to 30,000 today. But there is no letup in politicians encouraging black criminals to target white landowners.

A direct correlation has been established between anti-white hate speech from South African politicians and farm attacks. A March 2017 AfriForum study noted that the number of farm attacks spikes when a South African politician delivers a speech vilifying white farmers. When President Jacob Zuma took to the stage in June 2012 to sing about massacring white farmers with machine guns, farm murders spiked 36 percent over the previous month.

Farm murders jumped another 92 percent last November over the previous month, when the Marxist politician Julius Malema encouraged blacks to occupy white-owned land. “When we leave here, you see any beautiful piece of land, you like it, occupy it!” he told supporters outside the Bloemfontein Magistrates Court. “It belongs to you! It is your land! It is the land of your forefathers. It was the land taken from us by white people, by force, through genocide!”

Many former members of Zuma’s African National Congress have left the party to join Malema’s Economic Freedom Fighters. Zuma is trying to reach out to disaffected voters by promising to confiscate white-owned land without compensation—like Robert Mugabe did in Zimbabwe between 2000 and 2005. “They are telling us that we will be breaking the law when we take the land, but they broke the law first by stealing our land,” Zuma told party loyalists last April. “No normal person would sit idly by after his land has been stolen from him.”

The hate speech coming from South African politicians is not only inciting murders, it is misrepresenting history. Contrary to claims that white settlers stole black land, the Cape Colony was mostly uninhabited when the Dutch settled there in 1652. Years later, skirmishes between the Dutch and the Khoikhoi people broke out over grazing rights, but the Dutch did not come into contact with Zuma’s people—the Zulu tribe—until 180 years later. At that point, Shaka Zulu had expanded the Zulu Empire to the borders of the Cape Colony by slaughtering 2 million people from these indigenous communities: Soshangane, Zwangendaba, Ndebele, Hlubi, Ngwane, Mfengu and Xhosa. In 1832, the Dutch tried to negotiate peace with Shaka’s successor. The new king ordered his men to club the Dutch peace emissaries to death. This ignited decades of war that did not end until the British Empire conquered the Zulu Kingdom in 1879.

The only people in the history of South Africa guilty of attempted genocide are the Zulu. Yet today, President Zuma conveniently accuses the Dutch and British of taking land from people that his own Zulu ancestors slaughtered. He covers up this grisly history in a bid to convince the black tribes of South Africa to band together against those of European descent. This strategy threatens to unleash violence in South Africa on a scale not witnessed since the end of the Anglo-Zulu War.

Historians refer to Shaka Zulu’s reign as the Mfecane—a Zulu expression that means time of “crushing.” This period ended when the British people rose to prominence in South Africa. The Bible states that there will be another Mfecane when the British people fall from prominence. This time of “crushing” will afflict all the descendants of ancient Israel, including British and Dutch South Africans as well as Americans, Australians, British, Canadians, New Zealanders and others. (For proof of these national identities, request a free copy of our book The United States and Britain in Prophecy.)

The Prophet Ezekiel describes this time in grisly detail. “Make a chain: for the land is full of bloody crimes, and the city is full of violence. Wherefore I will bring the worst of the heathen, and they shall possess their houses …” (Ezekiel 7:23-24). The Bible prophesies that so many bloody crimes will occur that they will be like links in a chain—one following right after another. This passage even talks about people’s homes being taken away and about conflict between ethnic groups.

Ezekiel 7 also explains why this time of violence is coming. It is because of the “abominations” of the people: their sins. This does not mean that the victims killed in farm attacks were more sinful than anyone else. Jesus Christ Himself was asked why 18 people were killed, seemingly at random, when a tower collapsed in Siloam. He answered, “[T]hink ye that they were sinners above all men that dwelt in Jerusalem? I tell you, Nay: but, except ye repent, ye shall all likewise perish” (Luke 13:4-5). Likewise, the 1,600 killed in farm attacks were not worse sinners than other South Africans. Yet God did not intervene to protect them. The Bible says God is allowing this chain of violence so that the people of end-time Israel can be forewarned of what is coming unless they cry out in repentance.

It is God’s great desire to teach all races and nationalities the way to peace and prosperity. If mankind would only listen to God’s commandments, they wouldn’t have to experience such horrific crimes. But the human heart is hard and too proud to admit that it does not know the way to peace, happiness and stability. Tragically, God must allow mankind to learn from their own choices until the time when they cry out to Him for instruction. Then He will be able to resurrect Sue Howarth, and all those who have died, to show them the path to real peace!