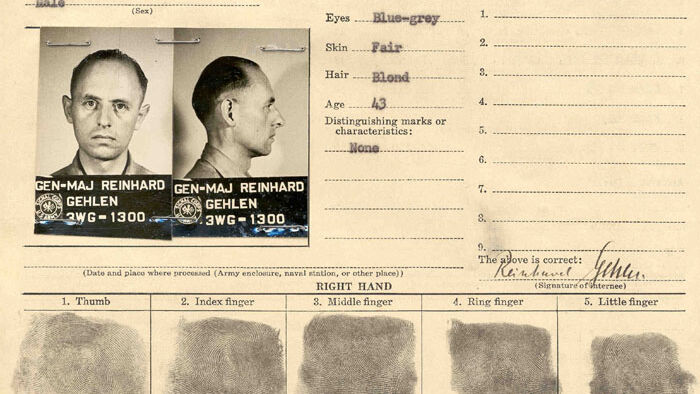 Once again Germany’s federal intelligence agency, the bnd, is engulfed in scandal. This time it is because it reportedly spied on the White House and other targets in the United States. To understand the magnitude of this story, you must understand the bnd’s history. The following is excerpted from late Trumpet columnist Ron Fraser’s 2011 article, “Germany’s Secret Service Scandal.”

In 2002 the German General Staff was revived under its old name as it was known under the Nazi regime, the Command Staff of the Armed Forces, with its headquarters centralized in the old imperial capital of Berlin.

“Some Germans believed that a move back to Berlin—the old imperial capital, Hitler’s capital—would coax forth the ghosts of Prussian militarism, of centralized rule …. Yet, since then, virtually every other cataclysmic forecast has been just as wrong” (New York Times, June 23, 2011; emphasis added throughout).

Well, much has changed since June. The forecasts are becoming dire.

Many of today’s observers of current events have largely forgotten the crucial observation that British geographer Sir Halford Mackinder made during a more pragmatic time in Anglo-Saxon history—“national mentality does not change.”

Centralized rule has always been a tendency of the Teutonic mentality!

Following on the heels of the centralization of Germany’s military high command in Berlin, in 2003 the German security services—the Federal Intelligence Service (bnd) and the secret police (bfv)—having been deliberately split up after World War ii by the Allies, were consolidated as a single centralized service, based also in the old Reich capital, Berlin!

But the bnd had a problem. It was a problem relating to its history.

From its inception, the bnd was literally infested with Nazis.

Shortly after the war, under the auspices of both the United States and Britain, former Nazi Gen. Reinhard Gehlen was encouraged to create Germany’s postwar spy network. This he did with the full connivance of the Allies, aggressively culling ex-Nazis, former SS officers and Nazi sympathizers—especially from the Soviet East—into the bnd structure.

Today, at a time when German nationalism is steadily asserting itself, all eyes presently look to Germany for a lead out of the global financial crisis. The whole world finally admits that Germany now holds the political and monetary whip hand in Europe. At such a time, with Germany being the focus of global attention, the nation can ill afford a scandal that would remind the world of the effects of the last time that Germany dominated Europe!

Thus it was that, with German elites already anticipating today’s deliberately engineered crisis, the bnd began shredding top secret documents relating to the Nazi past of its founder, Reinhard Gehlen, and his Nazi, SS and Gestapo henchmen. The secret service was especially intent on destroying any evidence of its agents’ prior involvement in Hitler’s final solution for the Jewish people.

Welt reports: “In 2007, the Federal Intelligence Service destroyed about 250 personnel files. Among them were particularly sensitive documents on former Nazis …. Among the destroyed files and documents have been those from people who in the Nazi era held ‘significant intelligence positions,’ including in the SS, the SD security service or the Gestapo. ‘These included bnd agents active in the bnd in the 1960s …. Among the records destroyed … have also been those on persons who were war criminals employed after the Second World War in the new West German intelligence service” (November 29; translation ours).

With Germany currently experiencing a rise in anti-Semitism, of particular concern to Germany’s secret service are revelations of the extent to which Reinhard Gehlen went to recruit “old comrades into the ‘Gehlen organization’—the predecessor of the bnd. Many of those he gathered around him were previously in the SS or the infamous Reich Security Main Office, used as the headquarters of the organized genocide of the Jews” (ibid).

Now it is here!

What is of extreme interest to those aware of the plan by German elites to resurrect imperial Germany is that the bnd hierarchy anticipated in advance the escalating global crisis that is now rippling around the world.

In 2009, the bnd commenced gradually leaking a secret report demanding debate in Germany on preparing the nation to handle what the German spy service terms a “long-lasting global crisis.”

The bnd document is predicated on the perceived loss of American power. “The German foreign intelligence service is predicting massive shifts in global power structure and is demanding ‘a geostrategic debate in Germany.’ The collapse of Western economies … could accelerate dramatically the rise of China and the descent of the longtime principle ally of the Federal Republic, the United States, a confidential bnd study states …. The secret document is currently being discussed in Berlin and has been incrementally released to the press in order to prepare the public for possible geopolitical upheavals” (German-Foreign-Policy.com, June 19, 2009; translation ours).

But, despite all this cloak-and-dagger preparation by the bnd for the prospect, yet once again, of blood on the streets in Germany, there is evidence of something much more sinister embedded deep within Germany’s secret service. It’s something that points to the prospect that the bnd never did sever its connections with its Nazi origins.

Recent events in Germany revealed suspected links between Germany’s security and police services and the nation’s endemic neo-Nazi movement. A series of brutal murders of foreigners across Germany have been recently linked to neo-Nazi cells. In more than one instance it appears that these killings were carried out with the full knowledge of the German secret service!

“[I]t has since emerged that investigators found a pistol in the ruins of the building linking the gang to the murders of one Greek and eight Turkish street vendors in separate incidents across Germany, and also highly sensitive intelligence documents suggesting that gang members may also have worked as secret service ‘moles.’

Hans-Christian Ströbele, a member of the parliamentary committee that monitors Germany’s secret service agencies, inferred that Germany’s elite deliberately mislead the German public on the threat of right-wing terrorism. “They have been determined to play it down. Just a few weeks ago, Hans-Peter Friedrich, the interior minister, was saying there was no right-wing terrorism in Germany,” he said.

That the minister responsible for Germany’s internal security would make such a public denial in the face of facts to the contrary is deeply concerning. One would think that being aware that he currently holds the office once held by Heinrich Himmler, who oversaw the murder of countless “unwanted” persons under the Hitler regime, the present minister would be most keen to protect the public from any hint of a repetition of such terror. Meanwhile, following this latest episode, the bnd is working its subterfuge to once again cover its dirty tracks.

The reality is, there is something rotten at the heart of Germany’s intelligence services. The roots go deep. For a senior member of Angela Merkel’s government to publicly deny what has been an ongoing deep-seated phenomena in Germany for decades—right-wing extremism—is a dramatic demonstration that the bnd and its associated police and security services never did lose their connection with the Nazi spirit of their founder, Gen. Reinhardt Gehlen. This public denial of facts, which are on record at the Interior Ministry’s own offices, hints at the collective mindset of his department being just a bit too closely aligned to that of Hitler’s Third Reich for comfort.

As Mackinder mused, “national mentality does not change.”

Yet once more, Germany is about to experience a reversion from its present postwar “democratic” mindset to its traditional aggressive pattern of behavior as soon as it has the centralized power, plus the political will, to seek to dominate the globe! The centralized power is in the making. It’s the political will to take advantage of it that is presently lacking. That requires charismatic leadership, something that is not evident in German politics today.

But it’s coming, as inerrant Bible prophecy predicts. And war—world war—will be the result!

Yet, it is to a vital future event, which these great signs of Germany’s rise to global dominance portends, that we must now look for hope! To be truly encouraged in these increasingly dark days, we must have renewed faith in the future. For that is where true hope lies!

Believe it or not, Germany, and all earthly nations, are going to undergo a true MIND CHANGE! Then Mackinder’s thesis will no longer hold water. That is the great reality that is prophesied to happen when the King of kings returns to change the heart of not only the German peoples, but all the nations of humankind!

We repeat, there’s a cause for every effect.

If crime is to be greatly reduced, then wiped out, there will be a reason. People may have many guesses, opinions, theories about what causes crime, but the answer is—human nature.

What is the cause of wars? The answer is—human nature. Why do people steal, murder, commit adultery or fornication, covet what is not theirs? Human nature.

We shall never have utopia on Earth until human nature is changed. But, you say—“Man can’t change human nature.” Oh, but God can! And that’s precisely what the living Christ is going to do, when He returns to rule all the nations of the Earth.

Yes, it is a historical reality that the nationalist socialist spirit did not die in Germany when World War ii ended. Herbert Armstrong was right. Nazi elites just went underground to continue with their project to build a global empire—the literal seventh, and final, resurrection of the old Holy Roman Empire!

The further centralization of Germanic power that will emerge from this week’s EU summit, combined with the sinister spirit that even now pervades Germany’s secret service, will soon merge in the persona of one dominant leader of the prophesied final 10-nation combine that is prophesied to stride the world for its brief moment in time.

Time is rapidly running out to prepare for that moment!

There’s no better place to start than to prove that Herbert Armstrong was right! That proof should lead you to the very Source that underpinned why he was right, and to the way in which you can most effectively prepare for the tectonic world events of the next few years!

Read, study and prove the plain truth revealed in our booklet He Was Right.