Voters are growing comfortable with a Labour Party ruled by a radical. Welcome to Britain’s new normal. 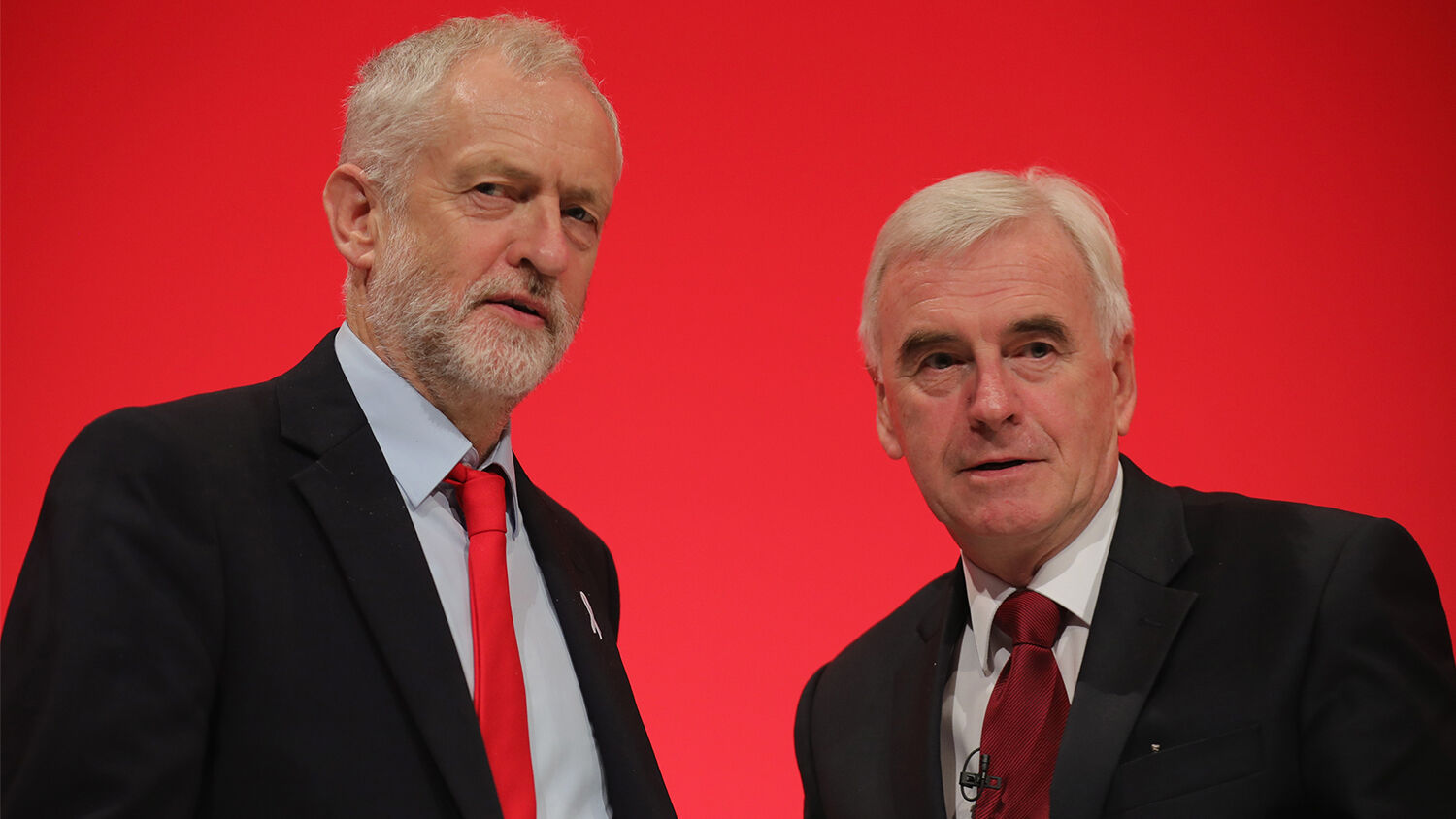 Voters are growing comfortable with a Labour Party ruled by a radical. Welcome to Britain’s new normal.

Once again a British election has shocked the world.

The June 8 snap election was announced by British Prime Minister Theresa May on April 18. Her Conservative Party had a working majority of just seven seats. At the time of the announcement, polls indicated the Conservatives were even more popular than they had been when they were elected and predicted that if elections were held again, her party would win in a landslide. So May chose to hold elections again.

Part of the reason the Conservatives were thought to be so popular was attributed to the radical views of their opposition. The Labour Party has become so extreme in its views that it seemed unimaginable that Britons would vote it anywhere near power.

But on June 8, just two months later, British voters handed Labour 32 more seats than it won in the 2015 general election. May’s party lost its majority, and is only able to remain in power with the support of the Democratic Unionist Party (dup).

This means that as extreme as Labour’s socialist views once were, they are now mainstream. Under the leadership of Jeremy Corbyn, the Labour Party won 40 percent of the vote, its biggest share since Tony Blair’s landslide victory in 2001. And Blair’s Labour Party was downright conservative compared to Corbyn’s.

Let’s look at the views of Jeremy Corbyn, his supporters and the manifesto they stood on—the manifesto that came within a whisker of governing the country.

A quick glance over the resumés of Labour’s top leaders reveals some dangerous commonalities. Whether it is running an organization that believes Britain is “no less sociopathic” than the Islamic State, or believing that “the British invented racism,” all of them have a deep-seated hatred of the West and what it stands for.

All also support Britain’s enemies. Corbyn, especially, has reached out to radical Muslim terrorist groups and has literally been in the pay of Iran, the world’s top state sponsor of terrorism. All supported the Irish Republican Army (ira)—terrorists who have attacked and murdered British citizens and even members of the royal family and tried to murder members of the government.

These dangerous views are actually popular in Britain in the 21st century!

Leader of the Labour Party

Both Britain’s MI5 and the Metropolitan’s Police Special Branch kept a file on Jeremy Corbyn, fearing that he might be a threat to the country. An unnamed Special Branch official told the Telegraph that the police monitored him for 20 years as he was “deemed to be a subversive.” The Special Branch defines someone as subversive if he is involved in “activities intended to undermine or overthrow parliamentary democracy by political, industrial or violent means.”

“You cannot have a Special Branch file just randomly; the commander had to have evidence that they were satisfied with,” the official told the Telegraph (June 7).

Shadow Home Secretary. The home secretary is generally regarded as the third-most powerful person in the British government and is in charge of both the police and justice system. Diane Abbott is in charge of Labour policy on these issues.

It would be easy to continue with more minor officials who worked for the Irish terrorists or who think Stalin was an OK guy, for example. But the patterns are clear. Britain nearly elected a leader who won’t sing his own country’s national anthem. It nearly handed its economy to a man who wants to smash Britain’s financial system. It nearly handed its police and justice system over to someone who thinks the greatest mass murderer in history, in terms of numbers, was not all that bad.

But perhaps British voters were ignorant of all this. After all, in the election campaign John McDonnell told an interviewer that he was not a Marxist, and Corbyn said he “had never met the ira.” People may have believed these patent lies.

However, the campaign promises these men wrote into their manifesto made their radicalism clear.

The manifesto is about high taxation, high spending, and even higher borrowing. Labour planned to raise almost £50 billion in extra taxation. The government would take over running the railways, the water system, the electricity system, the mail system and more.Labour would spend £35 billion on infrastructure, £6 billion on the National Health Service and £5 billion for schools.

The tax increases it proposed would not come close to covering these expenditures. Even if Labour’s taxes somehow brought in every last pound that the party claims they would and did not simultaneously cripple Britain’s economy, the government would still need to borrow tens of billions more.

Telegraph assistant editor Jeremy Warner wrote, “Jeremy Corbyn proposes himself as a kind of Hugo Chávez on steroids; he promises an economic ruin so great it would make the 1970s look like a golden age of British prosperity” (May 16).

“This is a whole new order of magnitude: It’s the kind of spending that you would only expect during an existential crisis like a war,” said Julian Jessop, the chief economist at the Institute of Economic Affairs think tank. “This is a massive increase in spending and a massive increase in tax and borrowing to [go] with it. … They are getting involved in almost every aspect of life. It’s like they are trying to reverse all the postwar liberalizations in one go. It’s unprecedented” (Telegraph, May 12).

Britain is already drowning in debt. Its debt, as a percentage of its economy, is at its highest since 1966, when it was still paying off debts from the worst existential crisis in its history, World War ii.

In 2010, the outgoing Labour chief secretary to the Treasury famously left a note to his conservative successor: “I’m afraid there is no money.” Since then, Britain’s debt has grown every year. The Conservative government promised to balance the budget, to stop borrowing. It failed.

Yet millions of British voters want the party that promises them even more borrowing—much more. They supported a manifesto that would put Britain on the road to becoming a bankrupt, Communist country.

Britons may have voted for Corbyn’s radical agenda in droves, but what does this mean, practically? After all, Corbyn is not the prime minister—yet.

Before the election Mr. Corbyn’s politics were considered so extreme that many even in his own party were against him. Now he has proved that these policies can actually be a vote winner. And the moderates in the Labour Party are changing course. They are getting behind the radical agenda!

Lord Peter Mandelson is one of the most significant figures on the right wing of the Labour Party. He was one of Prime Minister Blair’s closest supporters. Earlier this year he said, “I work every single day” to bring down Jeremy Corbyn. After the election he said he was wrong about Corbyn.

Owen Smith is a left-wing figure within the Labour Party. In 2016 he tried to push Corbyn out of the leadership, considering him too extreme to succeed. Now he says, “I was clearly wrong.”

“I don’t know what Jeremy’s got, but if we could bottle it and drink it we’d all be doing very well,” he said.

That’s not to say the Labour Party is now 100 percent behind Corbyn. But what was once extreme is now a viable election strategy!

At the same time, the next election may not be far off. With her tiny majority—and even then only with the support of another party—it will be very hard for Theresa May to govern effectively. “The normal pattern is for the minority government to limp along for a short period and then collapse, forcing the country back to the polls,” wrote the Economist.

The dup and the Conservatives are much more closely aligned ideologically than other groups of parties that have tried to work together in the past, and David Cameron held his coalition together despite widespread skepticism, so collapse is not a given. But elections are still a real possibility even in the near future. Could this be only the start of the march of the radical left in Britain?

How to Make Britain ‘Great Again’

Britain has a Communist Party. But this year it decided not to stand for election and instead directed its supporters to vote for Corbyn’s Labour Party. This is the first time in the Communist Party’s nearly 100-year history that it has ever done something like this.

That makes clear what just happened: Britain came close to a Communist takeover. But that takeover may have merely been postponed. Right now, 40 percent of Britons are in favor of it.

Earlier this year, Trumpet editor in chief Gerald Flurry published an updated version of his booklet Great Again. It exposes the alarming truth behind the stunning rise of the radical left in the United States.

This latest election proves that many of those trends are just as prevalent in the United Kingdom.

“What do you know about communism?” he asks in his booklet. “A growing number of Americans support the government taking over health care and other major segments of the national economy. They fail to understand the dangers that accompany a Communist system.” Nothing could be truer of the UK, when nearly half the country just voted for a Communist government.

“Modern proponents of communism downplay its subversive goals,” he writes. “But subversion is its very foundation!” In private, men like John McDonnell are clear about their “subversive goals.”

“The crisis facing this nation is not because of a bad president!” Mr. Flurry writes. “The cause is far deeper.”

This election proves that there are similarly deep problems in Britain.

The hard truth is, these deep problems aren’t just with politicians, they are with voters—with us. Mr. Flurry writes that America’s political leadership “speaks volumes about our people. We get the leaders we deserve. Especially in a democratic republic, we the people must accept the blame for the problems!”

When out-and-out Communists win 40 percent of the vote, we British have to take a good, hard look at ourselves. When a nation mired in debt almost votes for “the kind of spending that you would only expect during an existential crisis like a war,” that indicates there is something appallingly wrong with the entire educational system (sidebar: “‘Revenge of the Youth.’”)

In Great Again, Mr. Flurry explains where the real blame for America’s predicament lies: “God blames the people for their sins, not the leaders!”

To blame Britain’s problems on sin might sound old-fashioned. But it is only as Britain has gotten further and further away from even a basic understanding of the Bible and biblical morality that these kinds of extreme politicians have flourished.

But there is another dimension behind this shift to the radical left in Britain. Mr. Flurry writes, “There is a spiritual dimension to America’s decline that most people do not see.” That is true of Britain’s decline as well. To learn more about that spiritual dimension, read Great Again. The rise of the radical left it describes is dangerous, and Britain’s election results prove this is not just an American phenomenon.

Understanding this spiritual dimension exposes the true solution. “America, the British peoples (including Canada, Australia, New Zealand and South Africa) and the Jewish nation are facing horrendous problems,” writes Mr. Flurry. “Only God can save these nations.”