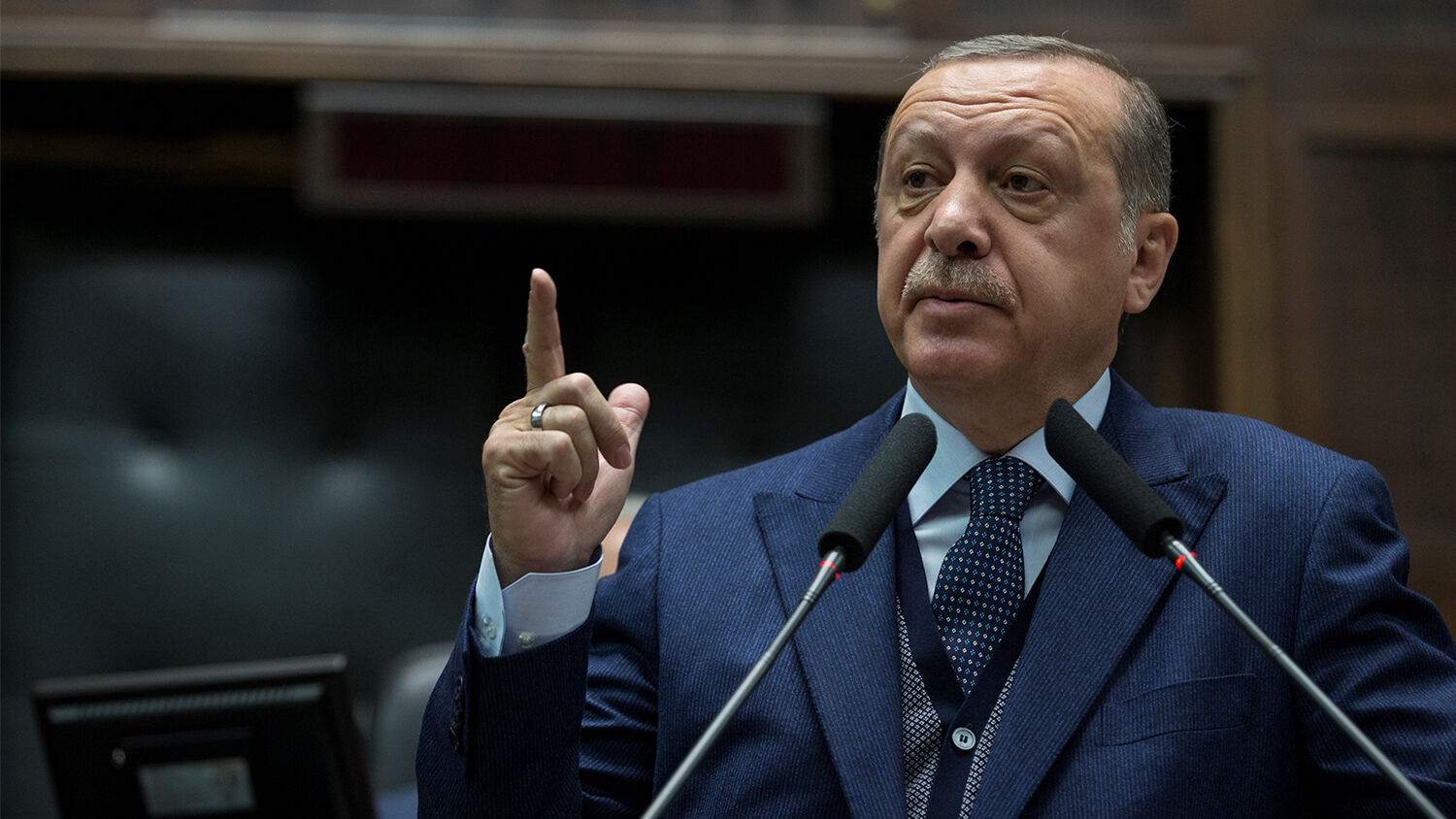 It’s no secret that European politics are becoming more extreme. The ongoing refugee crisis has not only empowered right-wing extremism in Europe, it has also enabled Turkish President Recep Tayyip Erdoğan to strengthen a Muslim political network across the Continent.

Over the last few years, various parties have formed throughout Europe that have Erdoğan’s backing and favor his policies.

Dutch party Denk, which for the first time gained three seats in the Dutch parliament this year, is accused of being a mouthpiece for Erdoğan. The Parti Egalité Justice (Equality and Justice Party), which made headlines in the recent French election, supports Erdoğan in France. The New Movement for the Future party backs the Turkish president in Austria. And there are others.

These parties claim to be the voice of millions of immigrants; however, their policies show that they are the voice of just one person: President Erdoğan.

Let’s take a closer look at two of these political parties that are supposedly backed by Erdoğan.

Democracy a Tool to Gain Power

Denk was founded in 2014 in the Netherlands by two parliamentarians of Turkish origin, Tunahan Kuzu and Selcuk Öztürk, who split from the social-democratic faction after a dispute over the government’s integration policy. What was then seen as a mere disagreement between party colleagues has now developed into a movement that hopes to change the Netherlands.

Party leader Kuzu said, after his party won three seats in the Dutch parliament, “This is the beginning of a new chapter in our history. The new Netherlands has given a vote in the house.”

Just like its political father Erdoğan, the Dutch party Denk is opposed to labeling the Turkish mass murder of the Armenians during the First World War as genocide. The party highly upholds Erdoğan’s image and suppresses any form of criticism against him. German newspaper Die Welt commented, “If other parliamentarians with Turkish origin don’t follow their submissive line, they are accused of being ‘apostates’ and denounced with name and image on the Internet” (Trumpet translation throughout). Through a method of intimidation, any opposition and criticism is eliminated, and thus Erdoğan portrayed as a political hero.

The minorities that support Erdoğan in Europe are asking for more freedoms, freedoms they would have if Erdoğan were in charge. One would think that the Muslims living in Europe would be alerted to the crimes going on in their home country. But they do not see the crimes firsthand, nor do they trust European media. Instead, the “Turkish-compliant media still largely determines their opinion,” Umut Karakas from the German Data 4U-Society for Communication Research told T-Online.

Thus, they are a perfect tool for President Erdoğan to spread loyalty to him and Islam throughout Europe.

Moreover, Denk compares the suffering and the threat immigrants face today with the persecution Jews faced in Nazi Germany. For example, Denk accuses Dutch politician Geert Wilders, who is known for promoting an anti-immigration policy, as the Adolf Hitler of our day. Erdoğan put forth similar comparisons to the political leadership of Europe. He said:

Now the election is over in the Netherlands … when you look at the many parties you see there is no difference between the mindsets of Geert Wilders and social democrats in the Netherlands. They all have the same mindset. … That mindset is taking Europe to the cliff. You have begun to collapse Europe. You are dragging Europe into the abyss. Holy wars will soon begin in Europe.

Erdoğan and his supporters in Europe try to discredit the established political parties and give more freedoms and power to the Muslim population. Therefore, it should not come as a surprise that the millions of Muslims living in Europe have a hard time integrating themselves into Western society. The “holy wars” Erdoğan mentioned refer to the reoccurring wars that Christianity led against the Muslim population in Europe and the Middle East.

Similar to Denk is the French Equality and Justice Party (pej) that entered the political arena in the French elections this year. Yves Mamou, who worked for two decades as a journalist for French newspaper Le Monde, wrote for the Gatestone Institution June 11, “pej is an element of a network of political parties built by Turkey’s President Recep Tayyip Erdoğan and his Justice and Development Party (akp), to influence each country of Europe, and to influence Europe through its Muslim population.”

Looking at the party’s political goals, one can easily see how this party is used as another mouthpiece for Erdoğan. Mamou summarized its agenda: The party seeks to abolish “the founding secularist law of 1905, which established the separation of church and state; mandatory veils for schoolgirls; and community solidarity (as opposed to individual rights) as a priority. All that is wrapped in the not-so-innocent flag of the necessity to ‘fight against Islamophobia,’ a concept invented to shut down the pushback of all people who might criticize Islam before they can even start.”

In other words, the party tries to accomplish the same as its Dutch counterpart: support Erdoğan, suppress criticism, sell Islam’s ambitions as a peaceful religion, and spread its influence.

Considering estimates on how many Muslims currently live in Europe, the potential of these parties and Erdoğan’s supporter group should not be underestimated. The Pew Research Center found that the number of Muslims in Europe rose from 29.6 million in 1990 to 44.1 million in 2010, amounting to 6 percent of the European population. Forecasts for the year 2050 predict as much as 10.2 percent. The numbers could, however, be far exceeded if the latest refugee crisis is not controlled.

The already established parties that rally millions of supporters behind Erdoğan are the beginning of his plan to establish a faithful support group in Europe. But Erdoğan does not even need a political party to arouse loyalty.

On the night of the attempted military coup in Turkey last year, Erdoğan called on the support of Turks around the world to prove their loyalty to him. His call was even heard on German streets; in one city in Hamburg, Germany, as many as 30,000 people flooded the streets to express their support for the Turkish president. “This is a devastating development. It is bad, but it is true: Erdoğan’s arm reaches as far as Germany,” former Social Democratic Party delegate Lale Akgün told Bild.

Last April, the German government witnessed another phenomenal sign of Erdoğan’s power in Germany. At that time, Turks voted on President Erdoğan’s request to reform the constitution—and give the presidency almost dictatorial power. Erdoğan’s actions were greatly condemned and exposed by the German media—even promotion campaigns were banned. Nonetheless, 63 percent of all Turkish voters in Germany voted for the changes, while only 51 percent of voters in Turkey voted in favor of the constitutional changes. Apparently, Erdoğan’s political arm has stronger influence in Europe than in Turkey itself.

How is it possible that Erdoğan can mobilize millions of supporters without having any direct influence on them?

While there is no established Muslim political party in Germany, there are various unions and organizations. For examples, the Turkish-Islamic Union Ditib, which oversees more than 900 mosques in Germany, and the Turkish Democrats, which is considered to be the extended arm of Erdoğan’s akp, serve as mouthpieces for Erdoğan’s propaganda.

For this reason, along with the increase of terrorism in Europe, more and more German politicians think that Germany needs to regulate and monitor what is being preached in mosques throughout the nation. Although mosques are religious institutions, they are used to influence the Muslim population politically.

The Goal of Political Islam

If you still think that these parties or mosques serve democratic or religious purposes only, consider the following quote:

Democracy is merely a train that we ride until we reach our goal. Mosques are our military barracks, minarets are our spears, and domes are our helmets.

These are the words of Erdoğan, which saw him imprisoned for eight months. His mentality does not seem to have changed.

In a guest post for the oldest Austrian newspaper, Wiener Zeitung, Austrian politician Robert Lugar warned against the Islamization of Europe. He described political Islam’s goal of gaining world dominance, and he called upon democracy to fight it. Historically, he wrote, we have seen the consequences of such a brutal attempt to gain power.

Throughout the centuries, starting with Mohammed, Islam has maintained the goal of becoming the sole religion of the world. The various denominations of Islam have the same goal, they just pursue different strategies to accomplish it. And just as the radical right opposes it today, centuries before saw Christianity vehemently fighting to get the upper hand, calling for one crusade after another.

It is true that the radical right exaggerates the topic of European Islamization to stir up hatred against the Muslim population. The political left, on the other hand, completely denies the existence of the attempted Islamization of Europe. Although predictions of a “sneaking Islamization” that turns Europe into an Islamic State or predicts the downfall of Western society are exaggerated, Islam does have an agenda that should not be ignored.

Erdoğan’s political ambitions in Europe prove his desire to spread Islamism around the world. But just as in centuries before, Europe is aggravated and preparing for another clash of civilizations. The Bible forecasts that this will be the last crusade to plague this world, as it will lead to the return of Jesus Christ who will bring peace to all mankind.