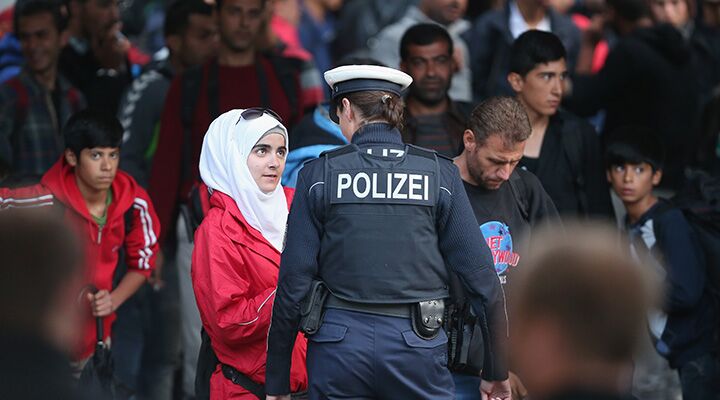 A new trend is emerging among a small number of Germany’s newly arrived Muslims—converting to Christianity. Hundreds of refugees from Iran and Afghanistan have been baptized in just one Berlin church. “Christian communities across Germany … have also reported growing numbers of Iranians converting to Christendom,” writes the Associated Press. Why? The local pastor hopes they are genuinely touched by his church’s message. But even he admits there is a more cynical motive.

In Iran and Afghanistan, a Muslim that has converted to Christianity could face imprisonment or even death. European human rights laws make it very hard to deport someone to a country where they face the death penalty or religious persecution. By becoming Christian, these former Muslims are dramatically increasing their chances of staying in Germany.

When the Council of Europe drafted its human rights laws in the wake of World War ii, no one planned the laws in order to persuade Muslims to convert. But religion is deeply embedded in Europe’s migrant crisis.

Of the roughly 330,000 immigrants who have arrived in Europe so far this year, around 110,000 are from Syria. Over 200,000 are from majority Muslim countries. A further 35,000 are from Nigeria and Eritrea, which are split evenly between Christians and Muslims.

Although these figures are incomplete—the EU’s border agency has only published details about the countries responsible for very large numbers of immigrants—they are sufficient to show that the majority are Muslim. This has many in Europe concerned.

“Those arriving have been raised in another religion and represent a radically different culture,” said Hungarian Prime Minister Viktor Orbán.

“Europe and European identity [are] rooted in Christianity,” he said. “Is it not worrying in itself that European Christianity is now barely able to keep Europe Christian? There is no alternative, and we have no option but to defend our borders.”

Countries with an especially strong Christian ethos—usually Catholic or Orthodox—are demanding that they take in only Christian immigrants.

On September 7, Cyprus announced that it would be willing to take in up to 300 refugees. “We would seek for them to be Orthodox Christians,” Interior Minister Socrates Hasikos said. This would allow them to “integrate better.”

His is the latest in a string of statements. “Refugees from a completely different cultural background would not be in a good position in the Czech Republic,” said Czech President Milos Zeman.

“We could take 800 Muslims but we don’t have any mosques in Slovakia so how can Muslims be integrated if they are not going to like it here?” said Slovakian Interior Ministry spokesman Ivan Netik.

“Slovakia, as a Christian country, can really help Christians from Syria to find a new home in Slovakia,” he added.

These are just the governments that are willing to go on the record. A spokeswoman for an agency that highlights the persecution of Christians in the Middle East said, “There are quite a few EU countries which have, for years, unofficially given preference to asylum applicants of Christian origin,” according to the EU Observer.

“She named Belgium, Ireland, Hungary, Poland, Slovakia and Sweden,” wrote the EU Observer. It also reported that a contact working for a government in the Baltic states told it that the region is becoming more anti-Muslim.

“A motif of cultural self-defense, of Europe as a Christian fortress justifiably barred to Muslim hordes, runs through” the rhetoric of many EU leaders, writes the Financial Times. “Syria’s savage civil war has generated 4 million registered refugees in the Middle East and beyond. But a person following Europe’s debate might wonder if the clock has reverted to 1529 and the armies of Suleiman the Magnificent, the Ottoman sultan, are at the gates of Vienna. …. These anxieties are found in southern, central and western Europe.”

The bien-pensant leaders of the European Union have despised Viktor Orbán for years, and they’ve been very critical of his statements. But there has been little outcry against the other countries that favor Christian immigrants. Such discrimination is, rightly or wrongly, against EU law. The EU’s left-wing functionaries usually whip themselves into a fury about this kind of thing. Yet any outcry has been muted. Europe’s leaders know which way the wind is blowing. Limiting immigration to Christians is popular in many circles.

Many of Europe’s major cities have huge Muslim minorities. Brussels, Marseille and Barcelona are all one-third Muslim. Even Paris is 10-15 percent Muslim.

Now throw in another activity that goes hand in hand with floods of Muslim migrants from the Middle East: terrorism.

Take the 200,000 immigrants who have arrived from Muslim countries so far this year. If 99.99 percent are not terrorists, that would still leave 20 who are.

Just last month, a Moroccan man who had traveled to fight in Syria tried to attack a high-speed train heading to Paris. How do you stop a madman buying a gun and getting on a train? It’s next to impossible. The only way is to focus on something most of these attacks have in common—a similar religion and ethnic background.

“There is no way to distinguish those who might kill from those who won’t,” wrote George Friedman, ceo of United States intelligence agency Stratfor, earlier in the year. “The Muslim community might be able to make this distinction, but a 25-year-old European or American policeman cannot. And the Muslims either can’t or won’t police themselves.”

Therefore, we are left in a state of war. French Prime Minister Manuel Valls has called this a war on radical Islam. If only they wore uniforms or bore distinctive birthmarks, then fighting only the radical Islamists would not be a problem. But Valls’s distinctions notwithstanding, the world can either accept periodic attacks, or see the entire Muslim community as a potential threat until proven otherwise. These are terrible choices, but history is filled with them. Calling for a war on radical Islamists is like calling for war on the followers of Jean-Paul Sartre. Exactly what do they look like?

“It is difficult to imagine another outcome save for another round of ghettoization and deportation,” he concludes. “This is repulsive to the European sensibility now, but certainly not alien to European history. Unable to distinguish radical Muslims from other Muslims, Europe will increasingly and unintentionally move in this direction.” This crisis is as big and transformative as Europe’s economic crisis.

This crisis is as big and transformative as Europe’s economic crisis.
The immigration crisis is already pushing Europe in this direction. As Trumpet columnist Brad Macdonald noted last week, that crisis is not going away any time soon. The next major terrorist attack will only add to the enormous pressures that are already building.

This crisis is going to change Europe’s foreign policy. But more fundamentally, it is going to help transform the very culture of Europe—its modern identity as a liberal, secure, tolerant and generally easygoing continent.

This crisis is as big and transformative as Europe’s economic crisis. The economic crisis put the Continent’s economy under a strain not seen in its modern history. That crisis is not over and it is already in the process of transforming Europe’s economy. The migrant crisis is the greatest challenge for Europe’s culture and society since the fall of the Berlin Wall—and maybe since the end of World War ii. It will transform that culture and society.

Religion will play a great part in the solution to that crisis. It’s hard to foresee exactly how—just as it would have been hard to foresee Muslims turning Christian in order to incur the death penalty—but it is too deeply embedded in the crisis to not play a role.

The best way to get a sense of what comes next is to understand Europe’s history, especially its Christian roots. We’ve just produced a brand new book on this subject. Order your free copy of The Holy Roman Empire in Prophecy by clicking here.