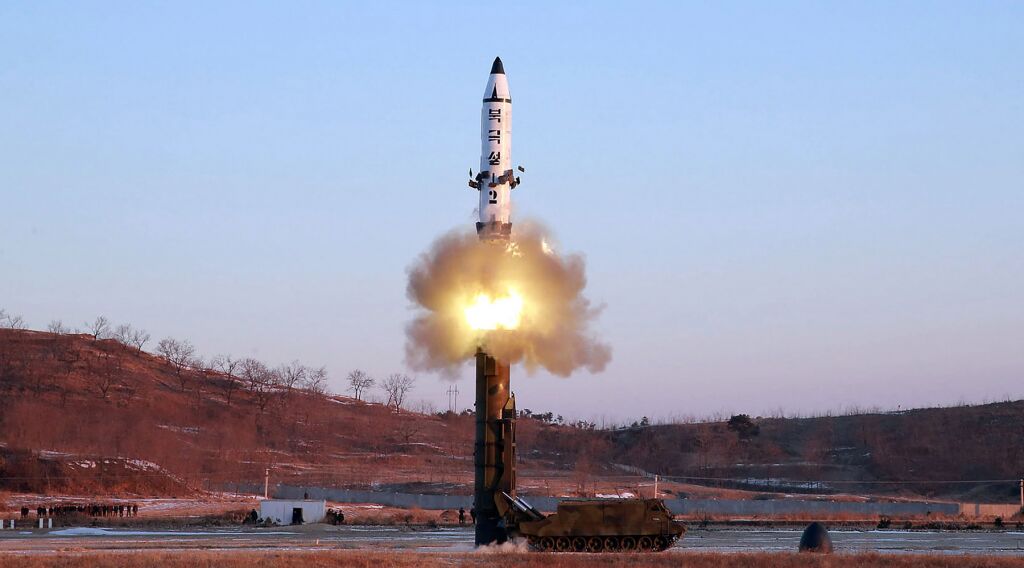 According to analysts, the developments are a “game-changer.”

The Pukguksong-2 is a medium-to-long-range ballistic missile, reportedly capable of carrying a nuclear warhead. It has an estimated range of more than 1,240 miles. Although North Korea’s Taepodong-2 missile has an estimated range of 4,000 miles, the Pukguksong-2 represents some worrying developments beyond just pure range. Unlike North Korea’s previous land-launched missiles, last Sunday’s launch used solid fuel, rather than liquid. This technology slashes preparation time and allows missiles to be launched on far shorter notice. The use of solid fuel also cuts the number of support vehicles necessary for launching the missile.

The Pukguksong-2 was also cold ejected from a mobile vehicle. Different from a “hot” launch, in which the rocket engines ignite at the beginning of the launch, cold ejection involves the missile being propelled away from its launch vehicle using compressed gas, before the rocket engines fire up. This limits potential damage to the launch vehicle, allowing more immediate reuse and reliability.

The launch vehicle that was used on Sunday is North Korean-made. Typically, the nation has depended on imported vehicles. The vehicle also uses caterpillar tracks instead of wheels, meaning it can travel over more types of terrain; access “off the beaten track” gives the launch vehicle the potential to become more undetectable.

The test-firing has been the rogue nation’s first missile launch during the administration of United States President Donald Trump. Thus far, the U.S. has only issued condemnation for the launch, as well as affirming security commitments with South Korea and Japan. Reuters global affairs columnist Peter Apps wrote of the recent developments:

Now Donald Trump faces North Korea, but stopping its nuclear and missile program may prove impossible, creating what may be his first and perhaps defining international crisis. …The Korean War [1950–53] came dangerously close to sparking a nuclear confrontation, with the White House preventing U.S. commander Douglas MacArthur from using atomic weapons to stop the Chinese and North Korean armies. Under Pyongyang’s current leader, Kim Jong-un, it is reaching what may be its most dangerous point since then. …This is a crisis everyone has seen coming. That’s why Japanese Prime Minister Shinzō Abe has been so desperate to court Trump, visiting him even before the inauguration. …Trump may see himself as a master of the “art of the deal” and has raised the prospect he might meet North Korean leaders. His problem is that there may be no deal to be done. This situation may become more dangerous—perhaps until something truly cataclysmic happens.

As Apps mentions, Gen. Douglas MacArthur considered it impossible to win the Korean War against Communist North Korea without engaging its powerful supporter, China. Hundreds of thousands of Chinese had attacked American forces in North Korea, driving them back to the South—as such, MacArthur requested permission to attack China, famously stating “there is no substitute for victory.” President Harry Truman refused, in the interests of a “limited” war. MacArthur was eventually fired.

Many years have passed since the bloodshed died down to the Korean War’s inevitable stalemate. North Korea has remained a thorn in the side of South Korea, Japan, the United States and the Western world. The rogue nation’s economy, military and general infrastructure still remain tightly linked to the umbilical cord of China. China enjoys the advantage of North Korea’s unique position as a buffer to Western forces in the South, and North Korea’s human rights crises keep other nations distracted from China’s own internal problems.

And so, for over half a century, the results of Truman’s “limited” war have only served to consolidate the status quo: a belligerent North Korea still propped up by a shrewd China. But North Korea is rapidly developing its arsenal of ballistic missiles and nuclear warheads, taking the world to the knife-edge of nuclear cataclysm.

The Korean War was the first major conflict that the U.S. entered following World War ii. Judging by the state of affairs from then until now, it is safe to say that it was a failure. You can say the same of the succeeding conflicts that have involved America: Vietnam, Iraq and Afghanistan, for example—none brought real success.

Herbert W. Armstrong, founder of the Trumpet’s predecessor, boldly proclaimed just after World War ii that the United States had won its last war. That prediction held true during the Korean War, through Vietnam, the Cold War, Iran, Libya and many other conflicts. It certainly rings true today as North Korea continues to become more and more dangerous.

The U.S. has the unquestioned power to utterly crush any form of North Korean aggression. Yet in an age of “limited” warfare, the will to properly deal with such a problem is absent. As such, alongside already deteriorating relations between China and the U.S., we can expect the North Korean problem to only intensify, likely to the point of some catastrophe. That’s the result of letting a nuclear problem fester—that’s the problem of a broken will. Read Trumpet editor in chief Gerald Flurry’s article “A Nation of Cowards?” to learn why that will has failed and what it means for the future.