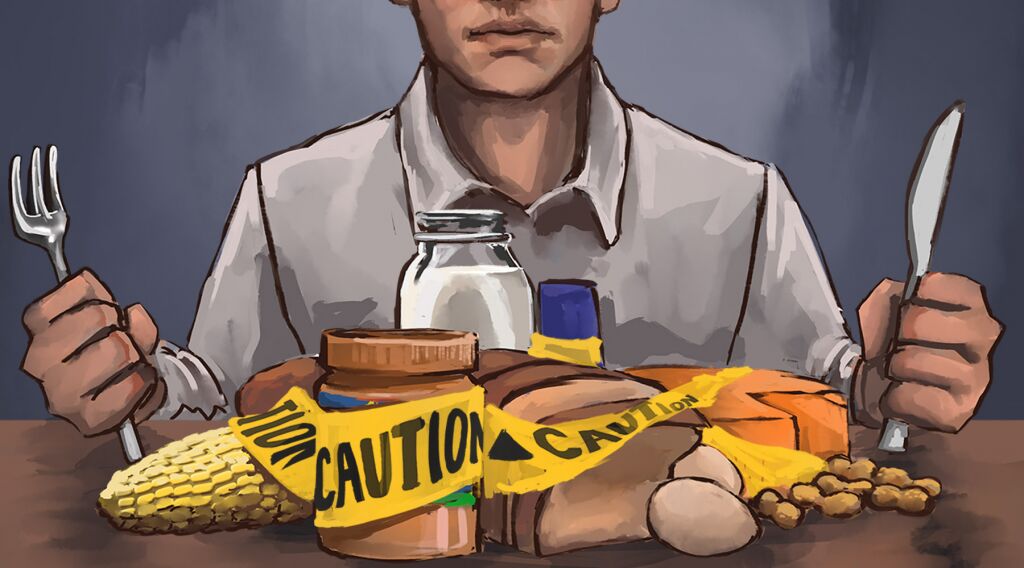 Lucretius wrote, “What is food to one is to others bitter poison.” Nowhere is this Roman philosopher’s observation more apparent than with the steep rise in food allergies over the last two decades. In years past, some few suffered an allergy to one type of food. Today, it is common to see people suffering from allergies to three or more foods. The scary part is that no one is certain of the cause or how to stop the problem. The allergic condition plagues a person with anxiety, food phobia and constant fear of reactions, sometimes up to and including death.

Why did generations before us not suffer from this epidemic? What is it that’s making us so allergic?

Food allergies have become the fifth leading chronic illness in the U.S., affecting up to 15 million people, according to the U.S. Census Bureau. The most common triggers are eggs, cow’s milk, peanuts, tree nuts, shellfish, sesame, soy, fish and wheat.

A seemingly innocuous meal can be a loaded weapon. When the allergy sufferer ingests a trigger food, the immune system produces immunoglobulin E antibodies in order to neutralize what it determines to be a danger. The body releases chemicals such as histamine into the bloodstream, triggering an exaggerated external response and sometimes a deadly internal response of swelling, known as anaphylaxis.

The big mystery is why we get allergies. Theories abound. The hygiene hypothesis says rising rates of allergies mirror our declining exposure to bacteria during childhood, making us prone to reacting to substances that would otherwise be harmless. Some also point a finger at increased rates of vaccinations, the use of carcinogenic agricultural chemicals and even genetics.

Surprisingly, an often-overlooked cause of food allergies is food itself. In The Unhealthy Truth, Robyn O’Brien writes that food allergies and intolerances may be a product of toxins and genetically modified ingredients in the industrial food system.

Beginning in 1994 with the introduction of the first genetically altered tomato, we have now reached a critical juncture with genetically modified foods. They have been shoved onto the public without meaningful debate, without long-term animal feeding studies or government tests, and without labels.

The Grocery Manufacturers Association says between 70 and 80 percent of all processed foods may contain ingredients from genetically engineered plants. So most Americans are eating genetically modified organisms with almost every bite.

The genetically engineered hormone rbgh (recombinant bovine growth hormone), used to increase milk production, causes cows to have higher rates of disease, requiring the use of antibiotics for ill effects. Consuming products from these cows is a major factor precipitating leaky gut, a condition where a person’s intestines have increased permeability. This allows toxins, microbes and undigested food particles to leak into the bloodstream, causing food allergies and many illnesses.

This marks the first time in history that pesticide toxins inside cell walls are being sold for human consumption. It also raises the possibility that eating produce containing Bt might damage the human digestive tract the same way it does to insects.

A 2011 study at Quebec’s Sherbrooke University Hospital showed correlation, finding the Bt toxin in the blood of pregnant women and their unborn babies. And in 2012, The Journal of Applied Toxicology showed the Bt toxin causes leaky gut, something Bt’s aggressive mechanism was designed to do to insects in a ruthless way.

O’Brien writes that since the introduction of genetically modified foods, hospitalization rates due to food allergies have risen 265 percent. This has concerned scientists, including some in the Food and Drug Administration, who have warned that genetically altering a food plant could trigger food allergies. In 2009, the American Academy of Environmental Medicine stated, “[S]everal animal studies indicate serious health risks associated with gm food consumption, including infertility, immune dysregulation, accelerated aging, dysregulation of genes associated with … insulin regulation … and changes in [major organs] and gastrointestinal system. There is more than a casual association between gm foods and adverse health effects. There is causation ….”

What can you do if you suffer from food allergies? Look for a nutritional program that focuses on removing damaging foods and replacing them with healthy alternatives, giving the intestinal lining a chance to heal and seal. One such program is the gaps nutritional program by Dr. Natasha Campbell-McBride.

For prevention, eat a wholesome diet based on unprocessed, ideally organic or locally grown foods cooked at home. These form the foundation upon which your immune system can function and thrive without allowing allergies to become a lifelong disability.