Will the Nippon Kaigi group steer Japan into a repetition of World War II-era nationalism? 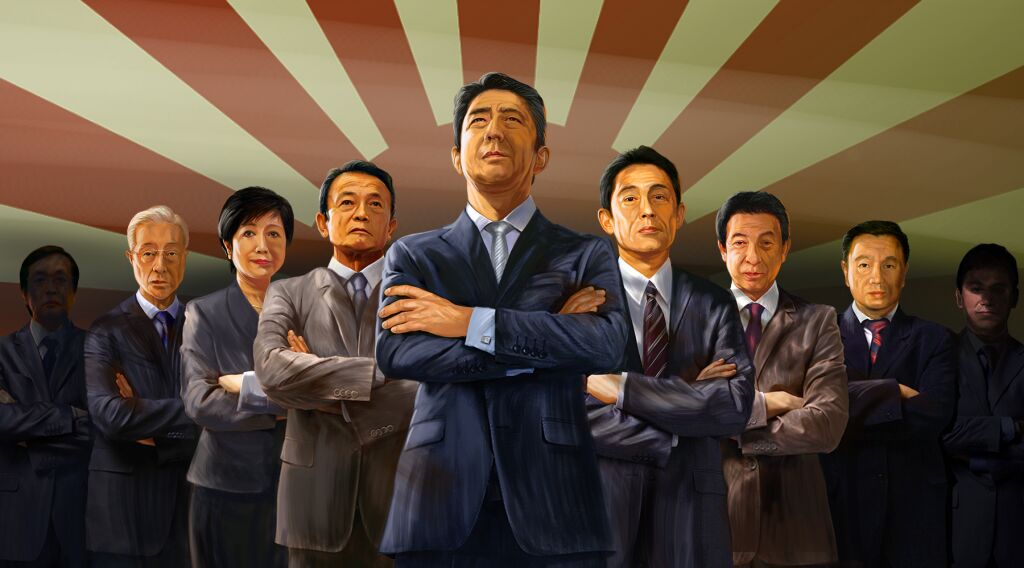 Will the Nippon Kaigi group steer Japan into a repetition of World War II-era nationalism?

What if Germany elected a leader who was part of a radical nationalist group that believed Germany should no longer acknowledge that it committed war crimes during World War ii? What if that group said historic accounts of Germany massacring Jews and other groups were “either exaggerated or fabricated”? What if that group believed Germany should, in fact, be applauded for “liberating” Poland, the Netherlands, Belgium, France and other nations during the war?

What if the stated goal of the organization was to return modern Germany to its World War ii-era “glory”?

And what if this German leader successfully stacked his cabinet with members of that same organization?

This is essentially the actual situation in Japan today. Yet the fact that more than half of Japan’s top leaders hold these beliefs regarding their country seems to attract little attention, especially outside of Japan.

Prime Minister Shinzō Abe is a member of the Nippon Kaigi (“Japan Conference”), a somewhat secretive group determined to normalize the Japanese military, teach history in a way that cultivates patriotism in young students, and restore the imperial family as the center of Japanese life. Ten of Mr. Abe’s 19 cabinet members also belong to this shadowy organization.

Shintoism is the ancient animist religion native to Japan. Leading up to and during World War ii, State Shinto, intertwined with nationalism and militarism, was Imperial Japan’s national religion. State Shinto promoted an ideology of Japanese racial superiority and the notion that Emperor Hirohito was a divinity, destined to rule the entire world. The fanaticism of Imperial Japan’s soldiers—and civilians—was driven largely by these religious beliefs.

The toxicity of this faith rendered many Japanese incapable of surrendering—even when offered the chance while facing insurmountable odds.

After Japan’s defeat in 1945, the U.S.-led Allied Occupation sought to root out the Japanese radicalism that had caused so much suffering throughout East Asia. The Allies abolished State Shinto, forced Hirohito to publicly renounce the idea that he was a god, and wrote a new constitution for Japan, saying its people “forever renounce war as a sovereign right” and that they also renounce “the threat or use of force as a means of settling international disputes.”

After Tokyo’s defeat, most Japanese accepted the outcome and embraced the postwar realities, which included a prolonged period of extremely rapid economic growth and a surge in the general quality of life in Japan. Most Japanese were grateful to the American-led occupation for bringing prosperity, stability and democracy to the nation.

But not everyone was remorseful about Japan’s wartime behavior. Not everyone was willing to accept the war’s outcome, including the Allied Occupation. In the early 1970s, some who were resentful of Japan’s defeat formed a State Shinto revival group called Nihon wo Mamoru Kai. They championed the trashing of Japan’s pacifist constitution and a return to nationalism and emperor worship.

The United States Congressional Research Service concluded in a recent report that Nippon Kaigi believes that “Tokyo War Crimes tribunals were illegitimate,” that the Massacre of Nanking was either “exaggerated or fabricated,” and that “Japan should be applauded for liberating much of East Asia” during World War ii.

The Economist listed the following as Nippon Kaigi’s primary goals: “[A]pplaud Japan’s wartime ‘liberation’ of East Asia from Western colonialism; rebuild the armed forces; inculcate patriotism among students brainwashed by left-wing teachers; and revere the emperor as he was worshiped in the good old days before the war” (June 6, 2015).

Kobayashi Setsu, a former member of the group and one of Japan’s top constitutional scholars, said Nippon Kaigi members “have trouble accepting the reality that Japan lost the war.” This is in part because some of the group’s members are descendants of those who instigated the war. Many, Setsu says, openly long for the days of Japan’s great-power status.

This is the group influencing the most powerful people in Japan.

Today, Nippon Kaigi has only around 38,000 full members. Yet it wields influence far beyond its membership rolls because its network reaches deeply into the various echelons of government.

Besides Prime Minister Abe, many other government officials also belong to Nippon Kaigi, including Mr. Abe’s deputy prime minister; his state ministers of defense, foreign affairs, education, health, reconstruction, and his chief cabinet secretary; and 289 of the 480 members of the Diet, Japan’s parliament. Other Nippon Kaigi members include numerous state and local lawmakers, renowned academics and authors, media moguls, leading Shinto priests, titans of industry, high-ranking diplomats and military officers, the great-grandson of Emperor Meiji and former Prime Minister Tarō Asō. Even a famous former sumo wrestler is among the group’s ranks. Former Defense Minister Yuriko Koike, who became governor of Tokyo in July, is another highly influential member. The former head of Nippon Kaigi was the former chief justice of the Supreme Court of Japan.

Why So Little Coverage?

For decades, Nippon Kaigi received little attention in Japan’s mainstream media, and even less outside of the country. That changed in spring of last year when researcher Tamotsu Sugano published an exposé called Nippon Kaigi No Kenkyu (A Study on the Japan Conference). The book sold more than 153,000 copies, making it a surprise bestseller and bringing Nippon Kaigi’s vast influence out of the shadows.

Sugano’s book shows that Nippon Kaigi’s main accomplishment has been uniting various nationalist organizations within a like-minded program. “Throughout 40 years of history,” he said, “it has been sending almost the same message and focusing on the same priority: educating the young generation.”

On January 6, in a rare and telling move, a Tokyo court ordered the book’s publisher to suspend all publication of A Study on the Japan Conference on the grounds that it contained defamatory information. The Japan Times noted on January 7, “It is rare for a court to suspend publication of a bestseller in Japan.”

Opponents of Nippon Kaigi say the court’s decision fits with the idea that the group wields considerable influence to suppress those who seek to expose that very influence.

The Economist said Nippon Kaigi has proved itself to have “a formidable ability to mobilize.” A major example of this came in 2006 when the group collected 3.6 million signatures demanding judicial reforms that would legally require schools to teach patriotism to students. The signatures were enough to pass the controversial legislation, which helped to ban “left wing” curricula and to reinstate the traditions of standing for Japan’s Hinomaru flag and singing the national anthem.

“Enacting a law with this requirement was one of the few things that Mr. Abe accomplished in his first, inglorious term as prime minister from 2006 to 2007,” the Economist said.

Around the same time, Nippon Kaigi played a vital role in convincing the government to restore April 29, the birthday of wartime Emperor Hirohito, as an official national holiday.

Sugano says it is clear that without Nippon Kaigi, Mr. Abe would not have been successful in returning to politics after his resignation in 2007 convinced many that his political career was finished. But with the group’s guidance and backing, Mr. Abe returned in 2012 and has gone on to win another two consecutive national elections.

Writing for the Daily Beast on July 9, 2016, Jake Adelstein and Mari Yamamoto said Nippon Kaigi was also instrumental in “getting the Japanese government to reinstitute the Imperial Calendar, which was banished by the U.S. occupation government.” That change means that while it is 2017 in the Western world, in Japan, it is year 29 of the Heisei Period. Adelstein and Yamamoto wrote, “The system is so confusing that many reporters in Japan carry a handy chart to translate the Imperial Calendar dates into Western time.”

Perhaps the most compelling evidence of Nippon Kaigi’s power came in the summer of 2015, when the Diet held heated debates about whether the country should have a right to collective self-defense. Sugano says the crucial factor in delivering victory to those arguing to restore that military capability was the testimony of three leading constitutional scholars. All three were Nippon Kaigi members or affiliates.

This victory equated to a milestone “reinterpretation” of the Constitution that expanded Japan’s military role abroad. Some 14 months later, in a clear indication that history is on the march, Japan’s first armed soldiers since the end of World War ii deployed overseas.

With Japan’s economic and industrial excellence, all it lacks to transform its defense forces into a nuclear-armed world-class military is will. Nippon Kaigi members have that missing element in abundance.

The Economist noted that Nippon Kaigi’s opponents have been impressed by the success that the group and its affiliates have had in “quietly transform[ing] the landscape of Japanese politics” (op cit). Yet Nippon Kaigi members themselves “are frustrated over what they see as the slow pace of change,” it wrote.

That pace, however, could soon pick up. As of July 2016, Mr. Abe, his Liberal Democratic Party and its coalition partners have a two-thirds majority in both houses of the Diet. This unprecedented double supermajority makes Mr. Abe the most powerful Japanese prime minister in postwar history.

Some analysts have argued that since Nippon Kaigi’s membership is comprised overwhelmingly of older individuals, it will soon die out and doesn’t need to be feared. But the age factor could infuse Mr. Abe and other members with greater urgency to return Japan to its war-era “glory.”

“I don’t think many people have grasped yet what is happening in Japan,” said Tawara Yoshifumi, head of the nonprofit group Children and Textbooks Japan Network 21. “The situation is very dangerous.” Tessa Suzuki, a professor of modern Japanese history at Australian National University, agrees. She told the Japan Times she is “enormously concerned about the way Japan is going.”

National Review columnist Josh Gelernter said July 16, 2016, that “it would probably be a good idea [for America] … not to stand idly by while our most important Asian ally, and the second-richest democracy in the world, reverts to fascism.”

Nippon Kaigi’s “strength is growing,” said Norihiro Kato, professor emeritus of Waseda University. “And there is no telling when its members might start saying what really is on their mind: ‘Take Back Japan From America’” (New York Times, Sept. 12, 2014).

In 1971, when even Nippon Kaigi’s forerunner groups were little more than whispers among closet nationalists, educator Herbert W. Armstrong predicted that Japan would awake from its postwar slumber, cast off the pacifism the U.S. imposed on it, and return to formidable militarism. “Japan today has no military establishment,” he wrote. “But we should not lose sight of the fact that Japan has become so powerful economically that it could build a military force of very great power very rapidly” (Plain Truth, March 1971).

Mr. Armstrong’s view was informed by Bible prophecy. He understood that Japan would be a key part of a massive end-time Asian military power bloc that the Bible calls “the kings of the east” (Revelation 16:12). Ezekiel 38:6 specifies that “Gomer” and “Togarmah” will be part of this power bloc. These are ancient names for the main peoples that make up modern Japan.

For decades, Mr. Armstrong’s forecast could have seemed alarmist to many Japanese and students of geopolitics. But now, in part because of the rise of Nippon Kaigi, that forecast no longer appears far-fetched. Today, as we face the prospect of nationalists and hard-liners dismantling Japan’s pacifist architecture and leading a revival of the nationalism, militarism and emperor worship that made Japan an unusually ruthless military machine.