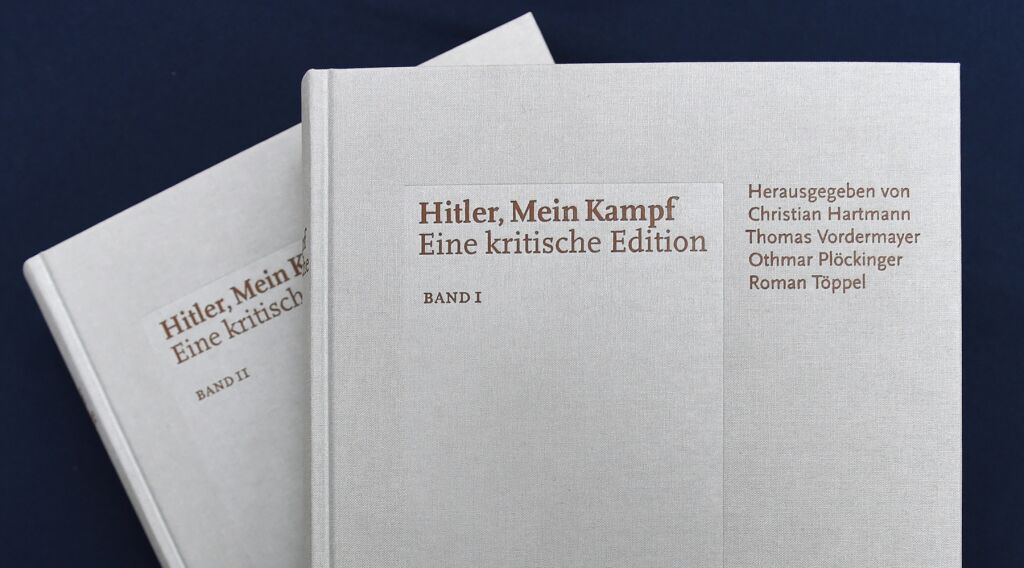 In one year, over 85,000 copies of Mein Kampf have been sold in Germany. When the copyright held by Bavaria expired in December 2015, the Institute of Contemporary History in Munich (IfZ) began to publish the book. Later this month, the sixth printing will be available at booksellers.

For 70 years, reprinting the book was banned in Germany for fear of resurrecting the ideologies of Adolf Hitler. The book was also banned to respect the sensitivity of the Jewish community, which was emerging from the horror of the Holocaust. However, when the copyright expired, educators in Germany thought it was time to release the book to the German public. The stated goal was to give the current generation of Germans a book that would warn them against the rise of tyrants.

Hitler wrote part of Mein Kampf in 1923 while imprisoned for his failed Beer Hall Putsch. The first edition was published in 1925, only eight years before he became the führer. The manifesto explained Hitler’s political ideology and propelled him to be the voice of the National Socialists. The book is a mixture of rabid anti-Semitism, belief in Aryan racial superiority, and extreme political Darwinism. The book sold 12 million copies between its release and the end of World War ii.

The version now available for purchase in Germany is heavily annotated by historians and scholars, providing context, criticism and commentary of the book’s most controversial statements. The book also sports a plain white cover, since Nazi symbols are still illegal in Germany.

A statement from IfZ said the main customers have been historians and educators. Most copies were purchased for use in schools. This has appeared to alleviate much of the criticism that the book could be used to support fringe political groups who support Hitler’s ideologies. Time will tell whether this trend will continue.

While much of the fear in reprinting the book has come from how some far-right movements might use the book, there is already a greater danger to consider.

There is not some mystical power surrounding Mein Kampf in which a reader may become entranced by the ramblings of Hitler. Much of the book is nonsensical and clearly the musings of a madman. Even the extreme Darwinism and Aryan racial theories were popular ideas in the late 19th and early 20th centuries. The readers of Mein Kampf in Hitler’s day would have already been well acquainted with most of the ideas found in the book. Today, those ideas no longer have any cultural context.

The danger, however, lies in how some European leaders interpret history. Perhaps to their surprise, they share similarities with what is found in Mein Kampf.

Hitler was by no means intellectually brilliant, but he read widely on history (at least up to World War i). One theme in Mein Kampf is Hitler’s belief that the nations of France, Britain and Russia were constantly undermining Germany’s power. He thoroughly believed in German nationalism and in the country’s right to be a leader in the world. He also believed Germany was part of an ancient historical tradition. Prominent German historian Percy Ernst Schramm wrote:

Throughout his life Hitler remained an inland-orientated German, his imagination untouched by the sea. … But Hitler was not only inland oriented; he was completely rooted within the cultural boundaries of the old Roman Empire.

Hitler believed that Germany’s destiny followed in the steps of Rome; he was entranced with the crown jewels of the Holy Roman Empire in Vienna. He thought these old symbols could unite Europe with a common heritage. In fact, he saw himself as the successor in the long line of Holy Roman emperors. Peter Watson writes in his book The German Genius:

For [Hitler], history was invariably the work of great men—his heroes were Charlemagne, Rudolf von Habsburg, Friedrich the Great, Peter the Great, Napoleon, Bismarck and Kaiser Wilhelm I. … For Hitler, history was a catalog of racial struggles, although the outcome always depended on great men: “[History] was the sum total of struggle and war, waged by each against all with no room for either mercy or humanity.”

Hitler believed that Germany could and should unite Europe with the heritage of the Holy Roman Empire. He fashioned himself after the image of Charlemagne and acted in the same spirit as the Holy Roman emperors of old. This interpretation of history, and view of leadership, is not unique to Hitler or his time. The leaders of Europe today are seeking to resurrect the same Holy Roman Empire.

While much of Hitler’s beliefs are obviously sadistic, not all are unique to himself. The personality and intense hatred Hitler brought to German life is certainly a unique event in modern times. However, Hitler’s mind was shaped by ideas already prevalent in Germany and Austria and some ideas that had survived for centuries in Europe. Thus, while Hitler as an individual was unique, what he tried to achieve was not—and that is where the danger lies today.

Mein Kampf itself may not be inherently dangerous. What is dangerous is the idea of a European strongman resurrecting the Holy Roman Empire. Reprinting Hitler’s manifesto should alert those in Germany to the allure of power and not to be fooled by a more sophisticated veil this time around. To learn more on this subject, read Trumpet editor in chief Gerald Flurry’s article “The Spirit of Charlemagne Is Alive in Europe.”