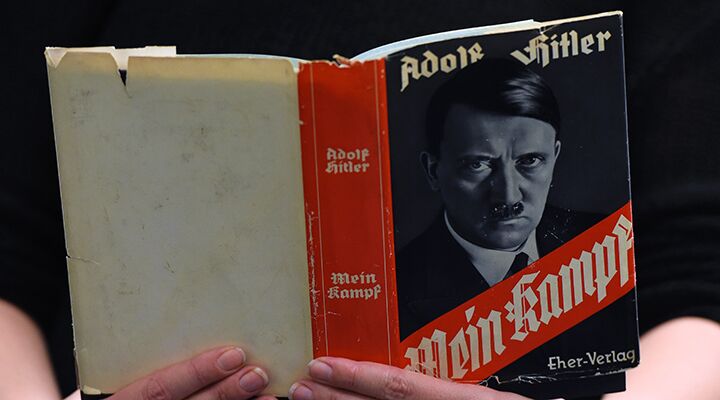 Can ‘savvy history and politics teachers’ use Adolf Hitler’s manifesto to immunize against political extremism?

Mein Kampf, Adolf Hitler’s two-volume anti-Semitic manifesto, could be added to the German high school curriculum after 70 years of restriction by the Bavarian government. Deutschen Lehrerverbandes, a German teachers’ association, says the introduction of an annotated version of the text could help “inoculate adolescents against politic extremism.”

Munich’s Institute of Contemporary History plans to publish Hitler, Mein Kampf. A Critical Edition in January. The new version extends the work to 2,000 pages with 3,500 annotations adding context to its inaccurate content.

Josef Kraus, president of the German Teachers Association, warned of the lure of the forbidden among young people:

What’s much more dangerous is remaining silent or completely banning the book. Nowadays, with the power of the Internet, everyone has access to everything. So it’s more important to me that something like this can be discussed in a differentiated and critical manner.

German authorities will likely prosecute any publishers of unedited versions on the charge of “inciting racial hatred.”

Jewish leaders have not all welcomed the open discussion of Mein Kampf in schools. Charlotte Knobloch, a Jewish community leader in Munich, told Haaretz she was opposed to the idea:

So long as German students know virtually nothing about the Jews, other than the Holocaust, and don’t learn about the Jewish religion, the flowering of Jewish life in Germany before 1933 and the accomplishments for which our country owes the Jews, using that profoundly anti-Jewish diatribe as teaching material would be irresponsible.

Knobloch said that time spent studying Nazism, the Holocaust, and World War ii is limited in German history classes. She said, “There’s no logic in filling those few hours with reading that disgusting, hate-filled and anti-Semitic book.”

The Institute of Contemporary History had asked for special permission for a critical commentary in previous years, but was denied. Andreas Wirsching, director of the institute, said that finally receiving permission to publish the book means “German democracy is now mature enough to withstand such a book.”

The edition will arrive only three months after the release of the German comedic film Look Who’s Back, which follows a resurrected Adolf Hitler in modern German society. Read about the non-fictional German reaction to the film in “How Many Germans Secretly Admire Hitler?”