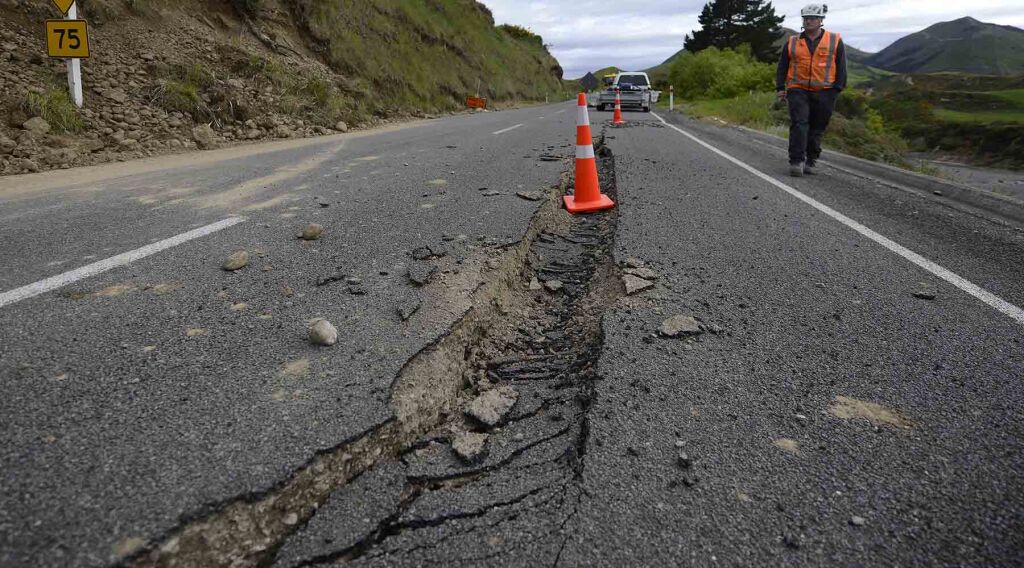 New Zealand was belted by a massive earthquake at 12:02 Monday morning, near the town of Kaikoura on the east coast of the South Island. New Zealand’s Geonet originally measured it at magnitude 7.5; it has now been confirmed to be 7.8, making it one of New Zealand’s four biggest in the past 150 years.

The extraordinarily powerful quake was felt as far away as New Zealand’s largest city, Auckland, which is around 500 miles away on the North Island. Residents along the South Island’s east coast were immediately advised to seek refuge on higher ground in the event of a tsunami. Swells up to eight feet high were reported along the coast. However, the extent of the damage from the quake only really began to be realized as the morning dawned.

Since the initial earthquake, around 2,100 aftershocks have occurred, with over 360 greater than magnitude 4 (the most powerful one reaching magnitude 6.3). Four faults have ruptured, according to Geonet, with one along the coast having reportedly slipped over 30 feet.

While the center of the quake hit a less densely populated area (two fatalities have thus far been reported), the extent of the devastation throughout surrounding areas has been immense. According to the New Zealand Herald, the quake triggered approximately 100,000 landslides around the country. Roads and railway lines have been either damaged by the earthquake or entirely blocked off by the landslides. Kaikoura, the town closest to the epicenter, has been cut off from ground transportation, and was left with only three days of water supplies. Approximately 600 residents and 1,200 tourists have been trapped there. Warships from the United States, Canada, Japan and Australia are en route to assist New Zealand warships in providing aid to those stranded in the coastal town. Some roads leading into the town could be closed for weeks according to estimates.

New Zealand Prime Minister John Key, who flew around some of the damaged sites on Monday, stated, “You’ve got to believe it’s in the billions of dollars to resolve these issues.” He canceled a trip to Argentina in order to remain in New Zealand and focus on the emergency at hand.

The usually bustling capital city, Wellington (itself around 130 miles from the quake), was essentially shut down Monday as workers assessed the risks posed by damaged buildings. A large office block suffered critical structural damage and many fear it might collapse. Severe weather has been pounding the capital at the same time, including wind speeds of up to 80 miles per hour in parts of the wider Wellington area. Severe flooding and further slips have continued to affect the region, hampering cleanup. Since the quake, Wellington has been deluged by more rain within 24 hours than it usually receives during the entire month of November. And further inclement weather is forecast to continue later on in the week.

Survival stories are beginning to emerge, including that of a 100-year-old woman rescued from her homestead—tragically, her son was killed in the quake.

After residents heeded tsunami warnings and fled their homes for the safety of higher ground, looters stepped in. At least 19 cases of looting have been reported.

Rebuilding has not even been completed from the 2011 earthquake that hit the South Island’s biggest city, Christchurch. That quake directly affected a heavily urbanized area. It measured 6.3 on the Richter scale and devastated Christchurch, leaving 185 people dead. In the five years since that time, more than 10,000 smaller aftershocks and earthquakes have been registered in the vicinity. I visited Christchurch two weeks ago; residents there described for me the horror of the 2011 earthquake that is still fresh in their minds. Little did we realize what would take place again less than 60 miles northeast. Added to that, New Zealand was hit this September by a 7.1-magnitute earthquake, this one off the east cape of the North Island. While this quake was felt over much of the North Island and northern South Island, the epicenter was out at sea and damage was only superficial, resulting in no casualties.

New Zealand lies directly over the boundary of what is known as the Ring of Fire, a highly geologically active ring encircling most of the Pacific Ocean. Approximately 90 percent of the world’s earthquake activity happens in the area of this ring. We New Zealanders are well familiar with regular tremors, but these recent massive earthquakes have been shocking and unusually destructive.

It is heartbreaking to see your country experience such disasters. At times like this, it is natural for people to question, “Where was God?” Natural disasters are a constant reminder of how powerless we humans are. To be rendered powerless is scary. People caught in the middle of disasters need hope; they need answers. And despite what you may have previously heard from religions, these answers are available. Read them here in our booklet Why ‘Natural’ Disasters? Inside, you will discover where real hope can be found.