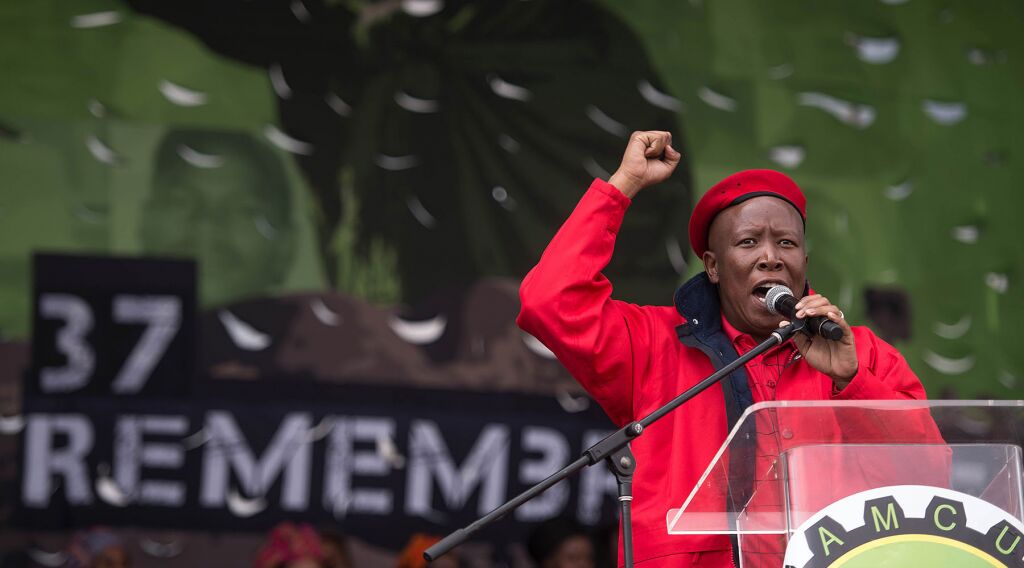 The words spoken by South Africa’s most radical politician may reveal the future of the Rainbow Nation.

On November 7, the leader of South Africa’s Economic Freedom Fighters (eff) political party appeared in court for essentially articulating the purpose of his party’s existence.

At a 2014 party conference, about a year after founding the eff, Julius Malema told his supporters, “We are going to occupy the unoccupied land because we need the land. For us to eat‚ we must have the land. For us to work‚ we must have the land …. If there is unoccupied land‚ we will go and occupy the land with my branch. You must go and do the same in the branch where you come from.”

At a rally this June, Malema bluntly declared, “If we say that South Africa belongs to whites too, it means we are defeating what our forefathers were fighting for.”

These whites found us here and not one of them came with a piece of land in their pockets. So‚ if you see a piece of land and you like it‚ don’t apologize‚ go and occupy that land. That land belongs to us.

Malema has certainly made other inflammatory statements. These, however, saw him in court on November 7 for contravening the Riotous Assemblies Act of 1956.

The man, who had been expelled from the ruling African National Congress (anc) for being too radical (even for the anc), did not appear repentant or bothered by the court action. In fact, he announced that he would challenge the constitutionality of the Riotous Assemblies Act.

After his court appearance, Malema told his supporters, “What we are calling for is the peaceful occupation of the land, and we don’t owe anyone an apology for that.” He said, “No white person is a rightful owner of the land here in [South Africa] and the whole of the African continent.”

“We are not calling for the slaughtering of white people, at least for now”—Malema
Apparently, Malema has learned little from neighboring Zimbabwe, whose leaders sanctioned a chaotic and economically ruinous “land reform” program.

[White people] found peaceful Africans here. They killed them. They slaughtered them like animals. We are not calling for the slaughtering of white people, at least for now. … White minorities be warned. We will take our land. It doesn’t matter how. It’s coming, unavoidable. The land will be taken by whatever means necessary.

It takes a dangerous level of insolence to respond to an accusation of inciting violence by challenging the law of the land and inciting more violence. And if Malema’s words and actions seem too bad to be true or too outrageous to warrant attention, consider that his relatively small eff party is arguably the fastest growing political movement in South Africa. Consider that, while Malema’s party won only 6.4 percent of the vote in the 2014 general elections (compared to the anc’s 62.2 percent), it became South Africa’s third-largest political party—a remarkable accomplishment.

Malema’s eff party might be small and fringy, but its views are in many ways merely an extreme, blunt version of those of his former anc party, the party that has ruled South Africa since independence in 1994. He has long been accused of hate speech—as have some of the anc’s leaders. He has been censured for singing controversial “freedom songs,” such as “Shoot the Boer” (“boer” meaning “white farmer”). He and President Jacob Zuma have been criticized for singing the controversial song “Lethu Mshini Wami‚” which translates to “Bring Me My Machine Gun.” Until his expulsion from the anc in 2012, Malema had been a controversial yet critical, asset in the party, especially as the leader of the anc Youth League. His views were fairly representative of the anc’s. But now, Malema believes that his mentors have let him down.

The eff leader has become a staunch critic of the current anc government under President Zuma. Recently, he has called for mass demonstrations in South Africa, especially in the country’s administrative capital, Pretoria, and the impeachment of President Zuma.

In his November 7 speech to his supporters, Malema said, “When a state has failed to give you the land for the past 22 years, it will be irresponsible for me to say continue waiting. That’s why I say occupy the land.”

Perhaps Malema’s words sound like reckless bluff and bluster. But they don’t sound that way to eff-cofounder-turned-Malema-adversary Kenny Kunene, who warned on Twitter November 8 that Malema’s hatred for white people is so deep that it “can’t be tamed.”

My white friends, rest assured you will not be slaughtered by [Julius Malema]; I will kill him before he gets to you. [South Africa] belongs to all who live in it. … I am not afraid of jail. I spent six years [there]. This time, I will be proud going back for stopping genocide and saving [South Africa] from a wild animal.

In a November 7 interview with the Citizen, Kunene warned, “When [Malema] said he doesn’t want to slaughter white people yet, that wasn’t a joke. That was the real Malema. When he said the white man mustn’t clap for the eff, he wasn’t joking; that’s the real Malema talking.”

The eff’s “About Us” webpage begins with the statement: “The Economic Freedom Fighters is a radical and militant economic emancipation movement that brings together revolutionary, fearless, radical and militant activists, workers’ movements, nongovernmental organizations, community-based organizations and lobby groups under the umbrella of pursuing the struggle for economic emancipation.”

Malema and his “economic freedom fighters” acknowledge the tremendous amount of wealth and potential that South Africa possesses: wholesome farmland, ideal climate, some of the world’s largest deposits of minerals such as gold, platinum and diamonds. These are some of the “natural” resources they are fighting for! But like most people, they fail to acknowledge the source of that wealth. That source has to do with South Africa’s association with the British Commonwealth, and it’s explained in our free book The United States and Britain in Prophecy. This book explains South Africa’s imminent loss of that wealth. It explains where the incendiary words and actions of politicians like Julius Malema are leading. It also explains in great detail how that wealth will be permanently restored to South Africa and enjoyed by all!