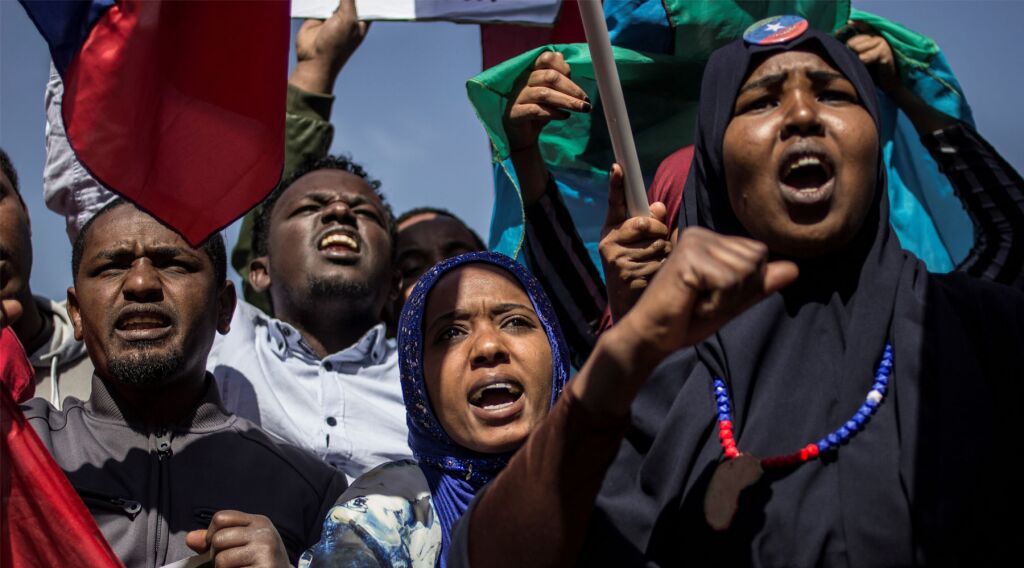 Civil unrest is growing in Ethiopia, Africa’s second-most populous nation. Upset by inequality and systemic corruption, members of Ethiopia’s two largest districts have taken to the streets. Since November last year, the protesters have faced off against strong government crackdowns.

Eighty percent of the country lives in poverty. Famine threatens 15 million residents. Many are ready to take out their frustrations on the government. But instability fosters its own problems, and opportunists in the region are watching closely.

After Ethiopia’s current ruling party—the Ethiopian People’s Revolutionary Democratic Front (eprdf)—came to power in 1991, it segregated the country along ethnic lines, forming nine districts. But rather than maintain equal or proportional say among the various districts, most of the power has been gathered by just one—the Tigray district.

The Tigrans make up just 6 percent of the population. Yet over the last two decades, they have worked to seize absolute power—the Tigran-dominated eprdf now controls 100 percent of the seats in parliament. As such, the eprdf enjoys little to no political challenge or discussion, near-total control of the press, and strong sway over the judicial system.

Of course, gaining 100 percent of the vote has led many of the country’s larger ethnic groups to claim that the government is illegitimate and corrupt. They are not alone in this view. On Transparency International’s Corruption Perceptions Index, where 100 means clean and 0 means totally corrupt, Ethiopia recently scored a meager 33.

When riots first started in November 2015, the government was well prepared. Addis Ababa, Ethiopia’s capital, sent in troops and the antiterrorism task force. Laws established in 2009 imbued the government with sweeping powers to combat anyone it deems to be a terrorist. Some analysts claim that the government has used these laws to justify the kidnapping, imprisonment and even torture of political opponents.

When the laws were being passed, Human Rights Watch said the legislation would “permit long-term imprisonment and even the death penalty for ‘crimes’ that bear no resemblance, under any credible definition, to terrorism.”

Since the November flare-up of protests, more than 500 protesters have been killed and thousands have allegedly been injured.

As Stratfor noted in an August 31 report, Ethiopian Prime Minister Hailemariam Desalegn has authorized the country’s armed forces to take “any and all” measures necessary to restore order. His comments echo one of his December 2015 speeches, when he said the government “will take merciless legitimate action against any force bent on destabilizing the area.”

No sooner had the riots began last year, than Amnesty International, a human rights movement against social injustices, was warning that government administrative expansion into the Oromia district was leading to cultural persecution. “The suggestion that these Oromo—protesting against a real threat to their livelihoods—are aligned to terrorists will have a chilling effect on freedom of expression for rights activists,” said Muthoni Wanyeki, Amnesty’s regional director for East Africa, the Horn and the Great Lakes.

No News Is Not Good News

There is a reason why these protests and human rights abuses rarely make the news. Ethiopian media is largely government censored. While not as stringent as many neighboring African countries, Ethiopia does wield tight control over the Internet and media.

The misuse of anti-terror laws has resulted in restrictions placed on a number of independent media outlets and nongovernmental organizations. The result is a media that turns a blind eye to heavy-handed government crackdowns.

The government has at times completely banned all forms of social media—effectively silencing any would-be critics. In 2015, U.S.-based ngo Freedom House reported that Ethiopia was blocking larger news websites such as bbc. Arguments can be made for temporarily blocking social media, which can pinpoint innocent people during an attack. But there is no risk to the public by allowing a reputable news source like the bbc to air. The only ones threatened by such a website would be the government.

With such tight and overarching control of the media, the full extent of the multi-district rebellion is hard to accurately gauge. Needless to say, with extensive troop deployments and a history of strong crackdowns, the likelihood is that the information reaching the Western media is just the tip of the iceberg.

Ethiopia has refused entry to special United Nations investigators since 2007, making the UN unable to report on Ethiopia’s domestic issues. The blocked investigations included inquiries into reports of torture and denial of freedom of expression and peaceful assemblies.

The West Looks On

News that does escape the country has been downplayed by much of the world. As Human Rights Watch explains, “Donor countries to Ethiopia have been largely silent about the brutal crackdown, presumably in part due to the Ethiopian government’s strategic relationships on security, peacekeeping, migration and development. For years, the U.S., the UK and other influential governments have basically rejected public condemnation of the Ethiopian government’s repressive practices.”

Ethiopia is a key security ally for America in the fight against the Islamist militant group al-Shabaab. The country is also important economically. Guardian Unlimited called Ethiopia “an economic battleground with China.”

In July last year, U.S. President Barack Obama visited Addis Ababa. During his speeches and press conferences, he repeatedly referred to the landslide victory of Desalegn’s eprdf as “democratic.”

Bekele Nega, the general secretary of the Oromo Federalist Congress (representing the country’s largest ethnic group), said, “I don’t know if democracy means robbing people’s vote and robbing their election result. They have killed people, and they have taken the ballot box with them in organized fraud.”

Faced with brutal retaliation and a lack of international support, protesters in the Oromia district and elsewhere are beginning to transition from relatively peaceful protests to acts of aggression. Last week, protesters burned a number of flower farms—flowers being one of the chief exports of the country.

Destabilization brings with it a whole host of problems, one of which is the opportunity for foreigners to exploit the situation. And one nation has gained a reputation as the opportunist of the Middle East: Iran.

Tehran has capitalized on unrest in Libya, Egypt, Lebanon, Syria and Iraq. In areas of civil unrest, radicals—and their sponsors—thrive. In Iraq, the rise of the Islamic State has afforded Iran the opportunity to be more involved than ever before. The same can be said for Syria. In Yemen, Iran is backing the Houthi rebels, aiding in the overthrow of the pro-Saudi government.

With the 2011 overthrow of Egyptian President Hosni Mubarak, Iran was able to rapidly build ties with the Muslim Brotherhood. In Libya, the removal of Muammar Qadhafi has led to the arrival of a number of extremist groups. One such group, the Free Egyptian Army, is being trained by Iran’s Islamic Revolutionary Guard Corps (irgc) Quds Force. Its purpose is to overthrow Egypt’s current administration!

Trends Say Iran Will Get Involved

Across the Middle East and North Africa, Iran is getting involved. Ethiopia’s immediate neighbors are testimony to this policy.

While the relationship between Iran and Sudan is frosty at the moment, the two certainly have a long history of partnership. As Haaretz notes, “For many years, Sudan was home to a Hamas command center, and it was also the military and political ally of Iran and Hezbollah. The Iranians used Sudan as a base for arms smuggling into the Gaza Strip and built a large factory near Khartoum for making long-range rockets for Hamas and Islamic Jihad.”

To Ethiopia’s north, Iran has had dealings with the reclusive Eritrea. While the Eritreans deny it, many opponents of the Houthi rebellion in Yemen claim that Iran is using bases in Eritrea to train and launch aid supplies to support the Houthi. Reports are now circulating that the irgc is also training both Houthi and Iraqi militias in Eritrea.

Across the Red Sea, Iran is deeply entrenched in Yemen. While not as intimately tied to Iran as the Shia militias, Hezbollah or other terror groups, the Houthis have Iran to thank for the ongoing stand against the Saudi-backed government. Iranian weapons, training and aid afford the Houthis the chance to stand up to Saudi air strikes and otherwise superior forces. This benefits Iran by establishing a southern front against the Saudis, while simultaneously tightening the chokehold on the Bab el-Mandeb Strait. For more on this strategically important sea lane, read our article “Iran: Sultan of the Red Sea.”

Then there is Somalia. The Somalian government cut ties with Iran earlier this year. The government accused Iran of establishing sects that pose a threat to national security in the Horn of Africa. Prime Minister Omar Abdirashid Ali Sharmarke accused Iranian diplomats of being “directly involved in meddling with internal Somali affairs and have carried out measures that are a threat to our national security.”

As all of the above show, Iran wants to be involved in the region. Even within Ethiopia, Iranian involvement with al-Shabaab shows it is intent on destabilizing the nation.

Prophecy Says Iran Will Get Involved

Some might scoff at the idea of a foretold Ethiopian alliance with Iran. But Iran’s goals for the region mirror what is written in the pages of your Bible!

As Trumpet editor in chief Gerald Flurry explains, from Daniel 10:10 to the end of the prophetic book is the longest single prophecy in the Bible. It mainly focuses on “the time of the end” (Daniel 11:40). The Moffatt Bible translates that expression, “when the end arrives.” And that time is here now!

All you need to do is get a good map of the Middle East, with the emphasis on the Mediterranean Sea and the Red Sea. Then you can see why the king of the south, or radical Islam, is so interested in an alliance with or control over these two countries (as well as Egypt and Tunisia). They are on the two seas that comprise the most important trade route in the world!Whoever heavily influences or controls Ethiopia will undoubtedly also control the small areas of Eritrea and Djibouti on the Red Sea coastline. These areas only recently became independent of Ethiopia. Also, I believe the Bible view is that these small areas are included as part of Ethiopia.

Who else but Iran is working so aggressively to promote radical Shiite Islam in these nations?

Mr. Flurry continued, “That could give Iran virtual control of the trade through those seas. Radical Islam could stop the flow of essential oil to the U.S. and Europe!”

Now read Daniel 11:43 and see Ethiopia specifically mentioned by name as a part of this alliance! Mr. Flurry explains in his booklet The King of the South, “So you need to watch Libya and Ethiopia. They are about to fall under the heavy influence or control of Iran, the king of the south. That is why they are subdued in the king of the north victory.”

These prophecies are sure. They are going to happen! There will be a king of the south, and he will control Ethiopia. And as Daniel wrote, there will be a sudden confrontation between this king and the king of the north.

Though God says this battle will usher in terrible times in the short term, there is also good news bound up in this warning. These prophesied events lead up to the return of Jesus Christ!

Just as God prophesies the rise and fall of nations, He also prophesies the return of His Son and the establishment of His Kingdom forever! For more information, read our free booklets Libya and Ethiopia in Prophecy and The King of the South